The Southern Railway was swift to electrify ex-SE&CR suburban lines: scheduled third rail electric operation commenced from Holborn Viaduct and Victoria, to Bickley and Orpington stations, on 12th July 1925. In the following year, the section of the Tonbridge Cut-Off Line north of Orpington was electrified throughout, to reach ex-SER termini at Charing Cross and Cannon Street; scheduled electric services ran from 28th February 1926. Orpington remained as the ‘’country’’ end terminus of the electric suburban network for a decade. Thereafter, extension of the initial scheme of 1925 saw third rail taken south to Sevenoaks, via both the ex-SER’s Cut-Off route and the ‘’Chatham’’ line via Swanley and Bat & Ball, electric services commencing on 6th January 1935. It was the SR’s final push eastwards to Gillingham, extending the scope of electric operation in the late 1930s, which called for significant infrastructure changes at Swanley Junction.

The existing station at Swanley Junction was positioned beyond the point of divergence between the ‘’Chatham’’ main line and Bat & Ball branch. However, a new timetable drafted for the extension of electric services to Gillingham included a new operational requirement of splitting – and joining – train formations here. For example, a two-unit electric formation heading from the London direction could be split at Swanley, with one portion continuing on to Gillingham, and the other embarking on the Bat & Ball branch (for either Sevenoaks or Maidstone). As the layout at Swanley Junction stood, train divisions would have to be undertaken in limbo, west of both the junction and station. Not only was this inconvenient for both staff and passengers, but it also blocked the main lines for those non-stop services. The rejoining of trains would have been even more bizarre, with each laden formation departing from the station, one at a time, only to stop about 200 yards further on, beyond the junction, to couple together. As a result, it was decided to begin from scratch and build a completely new station west of the junction, which would allow division and rejoining of trains at the platforms. Since 16th April 1939, the Junction station had been known as plain ‘’Swanley’’.

Throughout 1938, work ensued on widening the cutting to the west of Swanley Junction, to accommodate a layout of two island platforms, served by four tracks. The platforms were constituted of prefabricated concrete, produced at the SR’s Exmouth Junction Works, and extended for a length of 820-feet. The islands were protected by extensive W-shaped canopies, measuring 400-feet in length by 28-feet in width, and were based on the same design as those which emerged during the Tonbridge station rebuilding of 1935. A steel framework supported a plain timber valance and a glass roof. Upon both islands were constructed red brick offices, waiting rooms, and toilets, all of which featured horizontal concrete lining around their roofs. Platforms were lit with electric lighting, supported upon double-armed concrete bracket posts, and attached to the latter were the SR’s renowned ‘’Target’’ name signs. Immediately east of the canopies existed an enclosed passenger footbridge: of riveted steel construction, this extended for a length of 130-feet, and boasted entrances both north and south of the line. Housing estates had begun emerging along the line’s northern perimeter here during the early 1930s (hence the footbridge connection), and the station’s main building was initially planned for a site on the southern side of the cutting, elevated upon the embankment. Unfortunately, an impressive structure had to be forgone at the new station: the planning of a new trunk road was in full swing, and it had yet to be decided where this would cross the railway. As a result, cheap and easy to erect single-storey timber buildings were instead produced, and these were to remain for the next three decades. Mention should also be made of a second footbridge which crossed the new station site: this was of more traditional lattice construction, demonstrating a main span of 115-feet, and laid flush with the western ends of the platform canopies. The bridge was dedicated to a public footpath and provided no access to the platforms, although it was physically connected to the steel framework of the canopies. 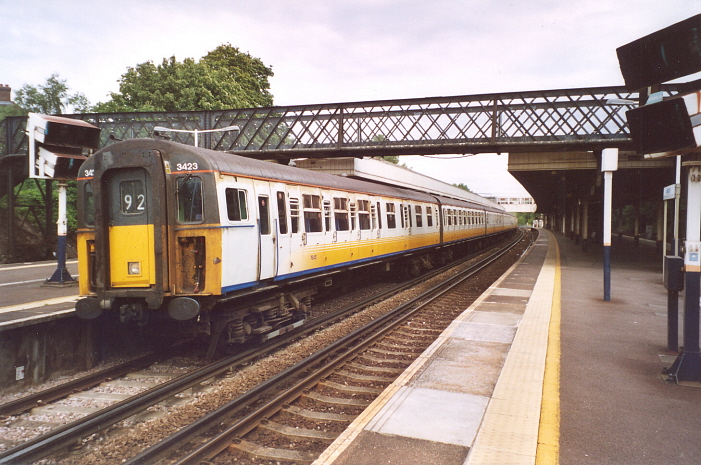 No. 3423, which is seen forming the front of a Faversham to Victoria service. Under the pre-TOPS classification

this unit was numbered 7761, and in its final days was one of fourteen Veps which retained all four vehicles it was

originally delivered with. The large television screen stacks on either side of the photograph were installed during

1991, as part of the ''Networker'' scheme of driver-only-operation. David Glasspool

and Bat & Ball routes. Swanley Junction station has all but gone, only grassy mounds within the V-shape of the

fork of lines now existing where the main building and platform surface once was. David Glasspool 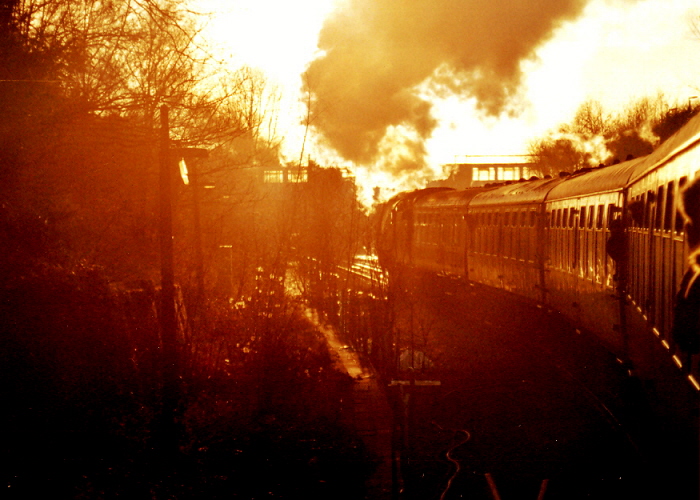 The footbridge is silhouetted in this evening view, depicting Un-rebuilt Battle of Britain Class No. 34067 ''Tangmere''

approaching with the ''Granville Express'', bound for Victoria. The concrete lampposts mark the former position of