Teynham came into use with the East Kent Railway’s first section of operational line between Chatham and Faversham inclusive, on 25th January 1858, and was a station typical of this company’s trunk line to Dover. Two platforms around a double-track arrangement were in evidence, the main building being situated on the ‘’up’’ side. The latter was based on a variation of a standardised design which was used on the route throughout: two storeys in height, the structure comprised two perpendicular pitched roof sections, and came complete with the LC&DR’s trademark whitewash wall finish. Large buildings such as these incorporated both the booking office and the Station Master’s accommodation, which eliminated the need for a separate house. Good examples of this architecture still survive at Farningham Road, Sole Street, and Shepherds Well stations, and it is worth noting that the buildings here all possess their own characteristic differences. Extending from the eastern elevation of Teynham’s main building was a single-storey square-shaped block, which lacked the whitewash finish of the rest of the structure; this appears to have incorporated toilet facilities, and a similar block came into use at Farningham Road in 1860. A 35-foot-long flat-roof canopy was attached to the main building’s northern elevation; its style was identical to that still in existence at Shepherds Well. Teynham’s ‘’down’’ platform featured a small timber waiting shelter, complete with wrap-a-round sides, which was set upon a shallow brick base. This sported the same valance as the ‘’up’’ side main building, and was also based on a standardised shelter design, similar structures coming into use at Selling and Adisham. Similar to several stations commissioned for traffic in the earliest years of railway operation, Teynham did not boast the luxury of a footbridge, the platforms being linked from the outset by track foot crossings at either end of the layout.

Goods facilities were concentrated behind the ‘’up’’ platform, and comprised four westward-facing sidings and a sole eastward-facing stub, the latter of which required a headshunt manoeuvre to gain access. Adjacent to the station building’s western elevation was a single-track goods shed, measuring approximately 45-foot long by 25-foot wide. It was constituted of the same crème brick as the station building, and came complete with the LC&DR’s well known orange lining, around the circular roof ventilation hole. A flat-roof canopy also extended from the structure’s southern elevation, having a valance which matched the style of those upon the platforms. Approximately 120-yards west of the goods shed was a diminutive wagon turntable, which provided access to a pair of roughly northward-facing stubs. Like the example at Rainham, the turntable’s close proximity to the ‘’up’’ platform required an indentation to be made in the rear of this surface; thus, the railings which lined the back of the platform demonstrated a pronounced semi-circular kink to accommodate this. As per Birchington-on-Sea, the LC&DR hired outside contractors Stevens & Sons to signal the layout. One of this company’s signal boxes appeared on the ‘’down’’ side, 160 yards west of the platforms, in about 1880, and was a slightly enlarged version of the example still in use at Grain Crossing.

Under SE&CR auspices, a lattice footbridge – comprising a main span of 65-feet in length – was installed across the running lines at the eastern ends of the platforms. Erected in about 1910, this was quite an extensive structure, suspended over a level crossing, and the main span sprouted no less than four flights of stairs. Two years previously, an additional eastward-facing siding had come into use behind the ‘’down’’ platform. This had been commissioned as an exchange siding for the single-track 3-foot 6-inch narrow gauge line of a local brickworks, which entered the station site, again behind the ‘’down’’ platform, from the west. The standard gauge siding was fitted with catch points, thus any runaway wagons would be derailed before reaching the main line.

Changes under the Southern Railway included the installation of swan neck-shaped gas lamps, circa 1926, and later on during this company’s tenure, the removal of the wagon turntable. Little else changed at the site until the British Railways era, a time of significant rationalisation. As part of the Kent Coast Electrification Scheme, the platforms were extended at their western ends by 390-feet, with concrete cast components, to accommodate the twelve vehicle electric formations proposed. Concurrent with this, concrete bracket lampposts, supporting electric lighting, appeared. On 24th May 1959, colour light signalling came into use at the site, but the Stevens & Sons cabin remained in use to control the still extant sidings. Goods facilities were formally withdrawn on 1st October 1962, but the last sidings did not go out of use with the signal box until 25th June 1967. Just three years later, demolitions were on the cards: the eastern side of the ‘’up’’ side building was demolished, to permit the building of a new 35-foot long single-storey ticket office. The latter was a soulless affair, merely existing as a brown-brick block, with timber cladding upon the roof line – similar structures came into use at both Newington and Swanley. Only the single-storey appendices of Teynham’s main building were dispensed with; the two-storey high Station Master’s house remained in existence alongside, and both the goods shed and ‘’down’’ side waiting shelter were retained. In addition to this ticket office was erected another structure of the same ilk, immediately to the east: measuring 10-feet across by 20-feet deep, this house the level crossing keeper, whom still moved the adjacent wicket gates by hand. This continued to provide road access to about twenty residences north of the line.

During the 1980s, the route was subject to a number of modernisations, which included the restoration of Faversham’s ‘’down’’ side ticket office and, in 1985, the demolition of the substantial ‘’down’’ side shelter at Birchington-on-Sea. In the same year, the original 1858 ‘’up’’ side building at Teynham was demolished, and the ‘’down’’ side waiting shelter was also lost. The latter was replaced by a clinical bus shelter, situated on a new site 75-feet to the east, in closer proximity to the footbridge. Twenty years later, the footbridge witnessed the replacement of its latticework with plain steel sides. Whilst the foundations of the former ‘’up’’ side station building can still be traced today, only the goods shed, in addition to the brickwork and railings of the platforms, remain of the original East Kent Railway station of 1858. 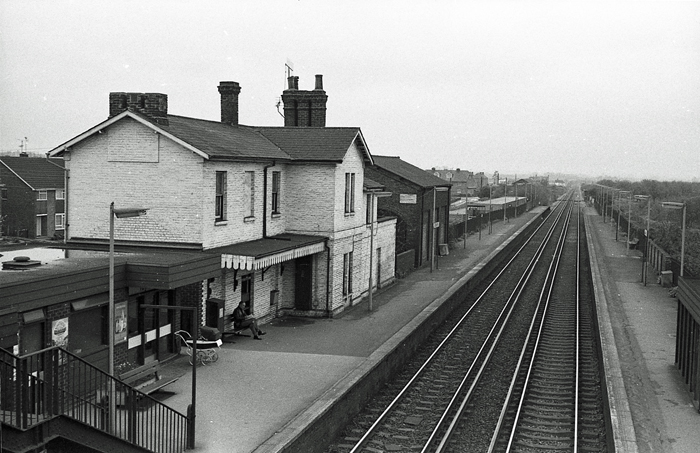 A London-bound view shows the original station building of 1858 on the "up" platform, sandwiched in-between the goods shed of the same vintage and the ticket office of 1970. To accommodate the latter, a single-storey part of the 1858 structure was removed, and complete demolition came in 1985. The CLASP waiting shelter on the "down" platform, also of 1970 origin, can just be seen emerging on the right. © David Glasspool Collection 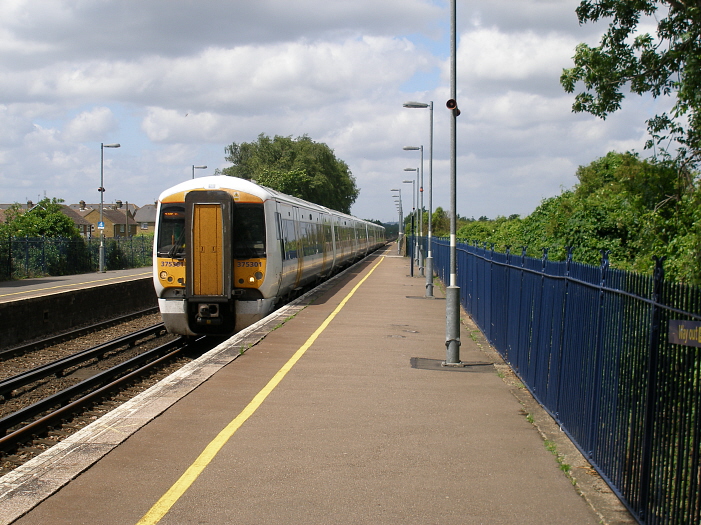 Three-car Class 375 No. 375301 passes through Teynham with a Faversham service, with portions for Ramsgate and Dover. The railings on both platforms are relics from the LC&DR era, and the overgrown area on the right, behind the platform, was formerly host to both a Standard Gauge and Narrow Gauge siding. © David Glasspool 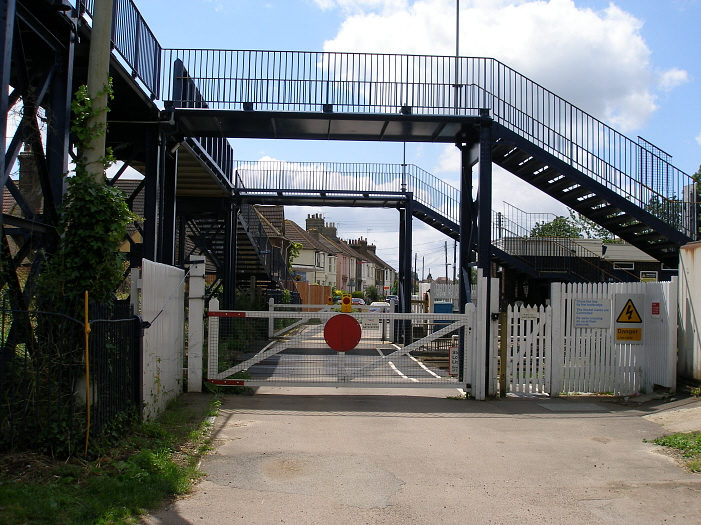 Although the station had been modernised in a rather clinical fashion, it still retained character in the form of traditional level crossing gates. These were still staffed at the time and provided access to a row of cottages behind the camera. The lengthy footbridge above had by now lost all of its lattice ironwork. © David Glasspool 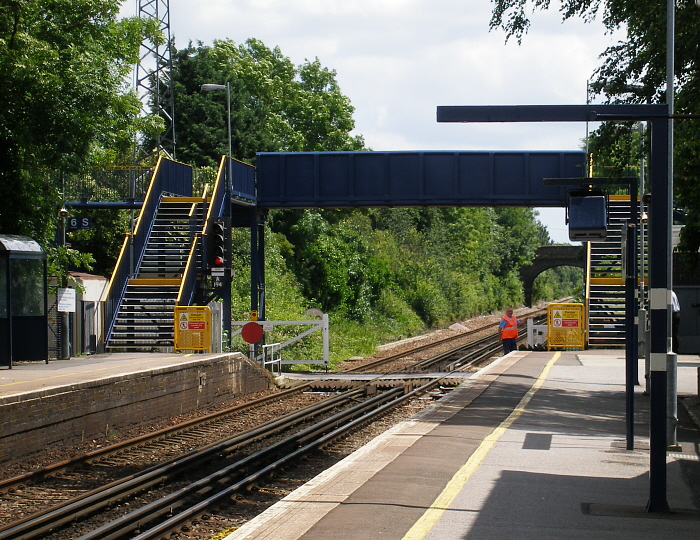 The gates are seen in action in this eastward view, as the keeper closes the crossing after the passage of a car. The keeper has a dedicated room, alongside the station building of 1970. © David Glasspool