When British Petroleum began to scale down its operations at the Kent Oil Refinery on Grain, from 1983 onwards, land became vacant for a new generation of industries. Piecemeal demolition of refining apparatus on the south eastern territories of the site, over the course of the subsequent three years, vacated land for two then new complexes, which operated in tandem with each other. The first of note was an aggregate terminal, opened by Foster Yeoman around the original spur giving access to Port Victoria station. This received two million tonnes of stone annually from Europe’s largest coastal ‘’Super Quarry’’ at Glensanda, in Morven Lismore, on the West Coast of Scotland. Due to the lack of both rail and road access at the latter, all material had to be conveyed between the sites by sea. Adjacent to Foster Yeoman’s terminal on Grain was a concrete works, this covering an approximate area of 735,150 m². Construction of this facility had commenced in 1986, after the signing of the ‘’Fixed Link Treaty’’ in February of that year in Canterbury. Formally opened on 23rd March 1988 by ‘’Transmanche Link’’ (TML), the work’s raison d’être was to manufacture concrete cast components, these of which would be used for lining within the Channel Tunnel. TML was a consortium of five British firms and five French companies which were contracted to bore and engineer the tunnel. Supplied by the adjacent aggregate site, the concrete works ceased operation after the completion of the Channel Tunnel, and TML disbanded after the official opening ceremony in May 1994. The aggregate terminal on Grain remained in operation: Foster Yeoman continued to ship in aggregate from Scotland for redistribution by road and rail after washing and screening the loads. All was not lost for the site of the concrete works, however, as the creation of a container port nearby would provide the area with a further use.

On 14th September 1990, ''Maritime Transport Services'' opened a deepwater container port along the southern coastline of the Isle of Grain. Comprising two berths since opening, to accommodate the huge container ships of the era, the seabed in the immediate vicinity was dredged some thirteen metres deep, allowing vessels to dock at any time, regardless of the tide. Christened ‘’Thamesport’’, the dock was flanked on its eastern side by the site of the disused concrete works, and a ⅔ mile-long spur, which branched off the Grain line before the Foster Yeoman Terminal was reached. This line, which fanned out into four parallel tracks for much of its length, was used for stabling TML’s concrete segment trains. Three of the four tracks were served by rail-mounted mobile cranes, which would lift heavy quantities of concrete from the storage area, into waiting wagon formations. When the concrete works ceased use, these lines, including the mobile cranes, were absorbed into the Thamesport operation, assuming a new use of loading and unloading containers. The container unloading area was later expanded, encompassing the whole area of TML’s former site.

From the outset this port was loss making, and with a £100 million debt looming over it for a number of years, it was subsequently bought-out in 1995 by ''Rutland Trust'' for approximately £52.5 million. Thereafter, the port became a profitable venture, but was, however, sold on again in December 1997 to ''Hutchison Ports'' for more than double the original purchasing price: £112 million. By mid-1997, the port was dealing with 450,000 containers annually, although in July of that year it was announced that new rail-mounted mobile gantry cranes were being installed onsite - five in total - which would see yearly traffic increase to 600,000 containers. The port has always been second-in-command to its nearby counterpart over the Thames, Tilbury, the latter having an illustrious history dating back to its opening in 1886. Indeed, much traffic has been diverted from Thamesport to Tilbury over the past decade and in recent times the general trend has been to shift all activities over to Essex, which may signal the end for Grain's container traffic. 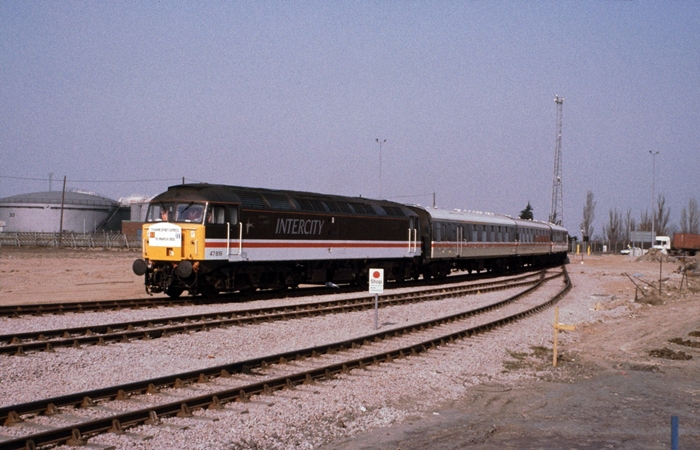 The official opening of the Thamesport Container Terminal, built on part of the former BP Kent Refinery site,

took place on 15 March 1993. Guests were conveyed to the event on a special charter train, the “Thamesport

Express”, which departed Victoria at 10:14 running as 1Z40. With ten coaches provided by the Inter-City Charter

Trains Unit in tow, 47819 is seen entering the terminal having just passed over ‘B’ Gate Level Crossing. 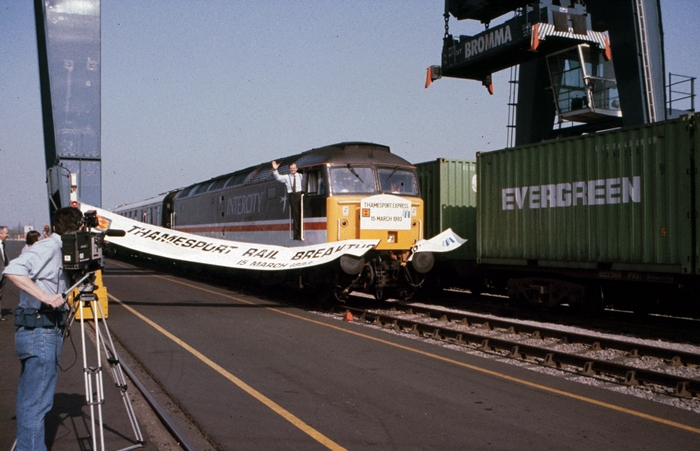 To conclude the opening ceremony, 47819 broke through a banner with Roger Freeman MP (and Minister for 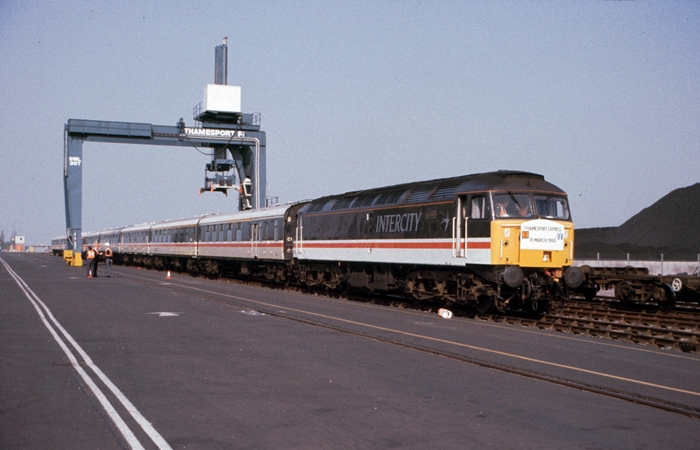 Whilst official guests toured the terminal, 47819 waits to run round the charter stock before departing as the 14:30

(1Z40) Thamesport to Victoria. Note also the large pile of coal in the background – at this time, a considerable quantity

of coal was still being used by the cement and paper industries in Kent, and Thamesport saw an opportunity to handle