This has for long been an important interchange station, sandwiched in-between junctions for Dover and Hastings to the east, and alternate routes to the capital to the west. Serious proposals for building a railway between London and Dover were made in 1825, and in that year, surveys of the County of Kent were made. Further surveying took place in 1832 and 1835, specifically the northern territories of the county, but problems were soon brought to the fore. No support for the scheme came from inhabitants of the towns within the northern parts of the county, and fierce, universal opposition to the railway came from landowners. In a ‘’General Statement of Projects’’ later published by the South Eastern Railway in 1846, it was recounted that of the railway, the ‘’system was not understood either in or out of Parliament. The powers of the Locomotive were little known, and it appeared that, to obtain in that direction the gradient then considered as the maximum surmountable by the engine, enormous expense must be incurred. The capacity of a Railway to compete successfully with the parallel Steam Navigation had not been brought to the test, and the results of such a competition were distrusted.’’ [South Eastern Railway: General Statement of the Position and Projects of the Company 1845 – 6].

The beginnings of the Dover trunk line lie with the London & Croydon Railway, formed by an Act of Parliament on 12th June 1835 to construct a line between its namesakes. This scheme met with little opposition, for the proposed route followed the course of a failed canal and did not make any incursion onto important private property. The line was subsequently built at a cost of £615,160 (£53,000,000 at 2008 prices), and was formally opened to traffic on 1st June 1839. For a matter of days, trains ran into the London & Greenwich Railway’s London Bridge station, until a dedicated terminus was provided on 5th June. The southern end of the route terminated at today’s West Croydon. Parliament decreed that only one railway should access London from the south, which meant that promoters of lines to Brighton and Dover had to use the L&CR as an outlet. The scenario was two-edged: firstly, sharing of one route by numerous companies would lead to obvious capacity problems and conflict of movements; secondly, however, much expense would be spared, for the first nine miles of line from London was already complete. Promoters of the South Eastern Railway, from London to Dover, first deposited a Bill in 1836 for a line which left the then proposed South Western Railway at Wandsworth. This would subsequently cut across south London to Croydon, where the existing line from London Bridge terminated. This was met with unwavering opposition from Parliament, which maintained that only a single rail outlet south of London was permitted. Thus, promoters revised their plans to begin the new Dover main line at Croydon, at the end of the L&CR.

A start point of Croydon naturally laid the foundations for a Weald of Kent main line. In contrast to the towns in the northern parts of the county, districts and influential landowners situated around the course of the proposed line strongly supported the railway. The line would cut through the central part of the county in a straight line, neatly positioned halfway between the Thames and English Channel. The line would also be characterised by shallow gradients, for the chosen route traversed the natural level. The ‘’South Eastern Railway Act’’ received Royal Assent on 21st June 1836. The company was authorised to raise a joint-stock capital of £1,400,000 (£110,000,000 at 2008 prices), and could take out loans totalling an additional £450,000 (£35,300,000 at 2008 prices). The SER Bill did not pass without competition, and two alternate independent railway schemes were also promoted at the same time. The first of these was the ‘’Central Kent Railway’’, which proposed a line from Deptford to Sandwich, passing over Cray, Darent, Medway, and Stour Rivers en route. The line was characterised by heavy earthworks and notable gradients, putting it at a distinct disadvantage to the SER scheme. A 4½-mile-long cutting, with average depth of 50-feet, was required at Wrotham; a second cutting, 3-miles and 16-chains in length and with an average depth of 21-feet, would have to be excavated at Charing. A lofty viaduct would be required over the Medway, and five heavy embankments were required, the latter of which were namely:

The second scheme was that of the ‘’North Kent Railway’’ (not to be confused with the later ‘’North Kent Line’’ of the SER), which proposed a line commencing nearby Hungerford and Waterloo Bridges in London, to Dover, via Blackheath, Woolwich, Gravesend, Rochester, Chatham, Sittingbourne, and Canterbury. Branches would also be sprouted to Deal, Maidstone, Sheerness, Faversham Quays, and Chilham, in addition to making a connection with an already authorised line to Ramsgate and Margate.

Construction of the Weald of Kent Line was slow to start, work finally commencing on 25th November 1837. The line began at Reigate, and the SER appointed William Cubitt as engineer. Works at Tunbridge commenced in the same month, and the first rails were delivered in May 1841. By 20th November of that year, three miles of finished line existed between Edenbridge and Tunbridge, and track laying between the latter and Staplehurst was also well-advanced. On 26th May 1842, through running between London Bridge and Tunbridge via Reigate commenced. Services were extended eastwards to Ashford on 1st December of the same year, and then on to a temporary station in Folkestone on 28th June 1843. On completion of Foord Viaduct, a permanent Folkestone station was brought into use on 18th December 1843 and, finally, through running to Dover began on 7th February of the following year. 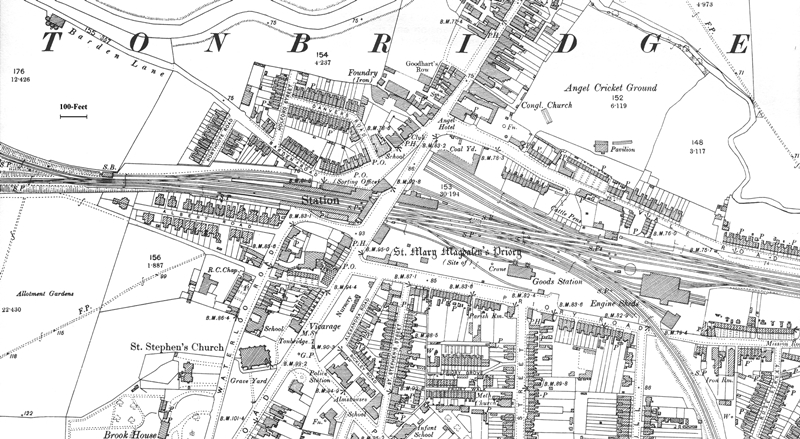 An Ordnance Survey from 1895 shows the station before the southern bay platform was converted for through running. The engine shed, to the right, is situated within the fork of the diverging Ashford and Hastings lines. To the left, the line through Sevenoaks veers northwards, whilst that to Redhill continues on an east to west heading. Click the above for a larger version. 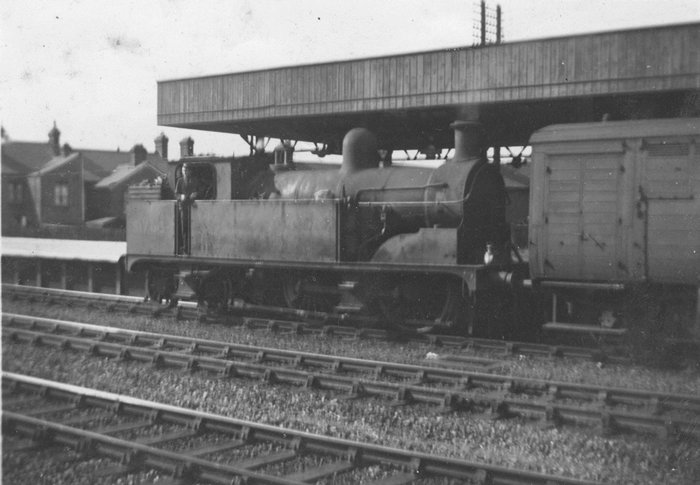 ''R'' Class No. 1703 (by this time BR No. 31703) was observed in the ''down'' platform loop at Tonbridge. The engine was still wearing the last carnation of the Southern Railway livery, complete with an ''S'' prefix before its number. The station canopy behind the locomotive dated from 1935 rebuilding work.  © David Glasspool Collection 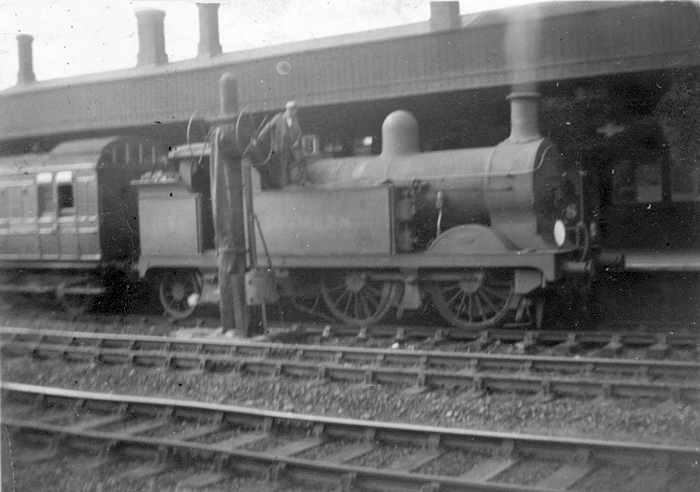 The fireman is seen refilling ''H'' Class 0-4-4 No. 31543 with water in the ''down'' platform loop. At this time, the engine still wore Southern Railway livery with ''Sunshine'' lettering. Behind the engine can be seen the distinctive end of an ex-SE&CR ''Birdcage'' carriage. © David Glasspool Collection 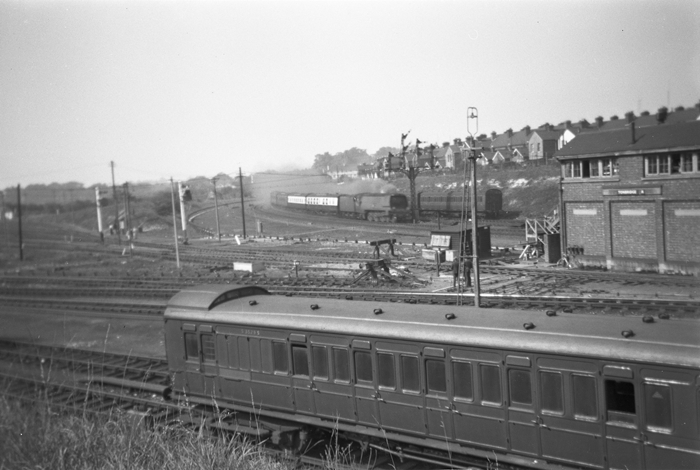 An Unrebuilt Bulleid Pacific rounds the curve at the west end of the station, fronting a named Victoria to Dover boat train via Orpington. The engine retains a high-sided tender, and a couple of Blood and Custard Bulleid-designed carriages can be seen trailing behind. The white signal posts just left of centre are on the throat of Tonbridge West Yard, and the sturdy SR-built ''A'' box is on the right. The sidings behind the Bulleid Pacific and in the immediate foreground can be seen holding ex-SE&CR ''Birdcage'' stock. © David Glasspool Collection