After reaching Dover in February 1844 from London Bridge via Redhill and Tonbridge, the South Eastern Railway was keen to expand its railway network further into Kent and the eastern areas of Sussex. Plans were being considered for the development of a North Kent route to link London with the Thames Estuary towns of Dartford and Gravesend, thence onto the Medway establishments. However, the next project on the agenda was the building of a line to Hastings to provide an alternative route to that of the Brighton, Lewes & Hastings Railway, which was subsequently absorbed into the London Brighton & South Coast Railway. In 1845 the SER received Parliamentary approval for the construction of a line to Hastings via Tunbridge Wells. Construction initiated in the year of the project's approval, the steeply-graded 5 ¾ mile double-track line to Tunbridge Wells, spurring off the Redhill to Dover route just east of Tonbridge Station, being built first. The line initially terminated at a temporary station known as ''Jackwood Springs'', on the northern perimeter of Tunbridge Wells, and was opened on 20th September 1845. The next half a mile of line from Jackwood Springs took over a year to complete as work involved boring an 823-yard long tunnel through ''Mount Pleasant'' to reach the proposed site of the permanent station. Completion came in November 1846 and services to the new station at Tunbridge Wells commenced on 25th of that month. The remaining 27¼ miles from Tunbridge Wells to Hastings was completed during a period of just over five years, through services finally commencing on 1st February 1852.

The station was not of the economical timber construction associated with many intermediate SER stops - quite the opposite. On the ''up'' side was provided an impressive two-storey station building of stone and red brick construction, certainly worthy of this spa town. The town had seen an influx of both new businesses and wealthy residents since the beginning of the century, and the SER station certainly reflected this. With a couple of goods sidings on the ''up'' side and a goods shed on the ''down'' side, many of the wagons were marshalled in to place by manpower during the station's early existence. Unusual this would seem, but in retrospect, not uncommon, particularly with the presence of individual wagon turntables at the time. When first opened, this station was provided with no ''down'' side for passengers, but the SER later reversed this situation by building an additional platform and more imposing buildings here. These most probably came into use with the extension to Hastings in 1852. This development more or less obliterated station goods facilities, although a clapboard signal box had been provided at the Hastings end of the ''up'' side by this time.

Meanwhile, the London Brighton & South Coast Railway was becoming concerned over the SER's extensive railway expansion southwards and with the latter reaching Hastings, then drafting plans for a line to Lewes, the former reacted. Consequently, the LB&SCR began planning its own line to Tunbridge Wells from East Grinstead, routed via Groombridge. This the company opened on 1st October 1866, originally intended as a terminating branch line. However, as a compromise for building the line, the Parliament Act of 1864 decreed that a connecting spur with the existing SER establishment must be put in place - and so it was. Little traffic traversed over the spur linking the mutually hostile companies in the early years, and through passenger services did not become a regularity until 1876, freight having initiated shortly before in a small form.

The Grouping into the Southern Railway of 1923 eliminated the hostility between the SE&CR and LB&SCR, bringing a number of changes. The SE&CR station gained the suffix ''Central'', whilst that of the former LB&SCR became ''West''. Major structural changes to Tunbridge Wells Central had already come to light: in 1911, the ''down'' buildings later installed by the SER were demolished and replaced by equally imposing, but impressive, red brick designs by architect A.H. Blomfield. Interestingly, however, the same SER canopy on the ''down'' side was retained, but the footbridge linking the two sides was modernised. The latter had been lattice in construction and roofed since the ''down'' buildings were installed, but further protection from the elements came when the bridge received glazing - the lattice pattern was also covered over. The Central station generally remained the more important of the pair in the spa town, particularly after the the decline of rail travel during the late 1950s and 1960s, compounded by the fact that compared with its former rival, it was on a main line. Tunbridge Wells West eventually closed on 6th July 1985, leaving Tunbridge Wells Central as the town's sole station. Despite closures, there were improvements: signalling upgrades, track renewal and installation of third rail from Tonbridge to Hastings saw electric trains serve Central station from May 1986 onwards.

In previous years, the stock employed on this line, even dating back to the days of steam, was interesting. Until diesel units came on the scene during 1957 and 1958, stock along the route was flat-sided Maunsell coaches, usually hauled by ''Schools'' class locomotives. The ''Hastings'' DEMUs which then replaced these formations from 1958 onwards were similarly treated, demonstrating the distinctive straight body sides. The tunnels along the route have been unusually narrow since opening - the original building contractor decided to undertake the job on the cheap. The tunnels were built to the correct dimensions, but utilising too few layers of bricks, this of which was discovered before line opening. Rather than completely rebuilding the tunnels, extra layers of brick were simply applied inside to strengthen the structures. As a result, this posed a restriction on the width of stock which could pass through. Since the 1986 electrification, however, standard width stock has traversed the route, this being achieved by singling of the sections of line through the tunnels. 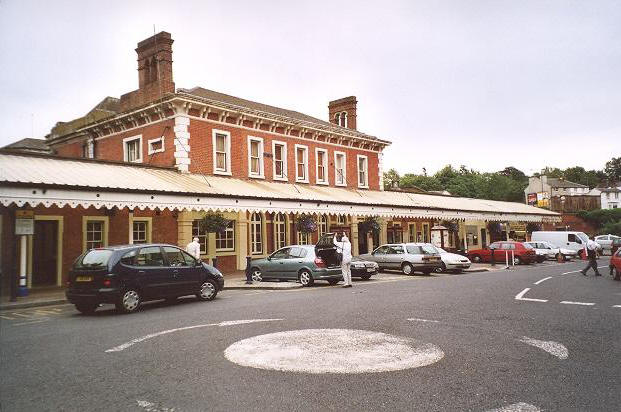 November 1846, the long canopy being a slightly later addition, although still of SER design. This

building originally served one platform face, despite the branch being double-track from the outset.

as a town. David Glasspool 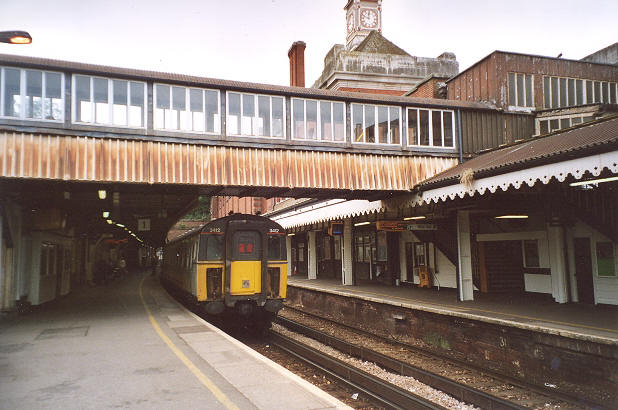 A common sight from May 1986 was the 1956-produced 4 Cep units, after the electrification

is seen terminating in the up platform after brining in a service from London Charing Cross.

The down platform, as seen on the right, is a mixture of SER and SE&CR architecture juxtaposed,

providing an interesting comparison. Above the footbridge can be seen the clock tower of the 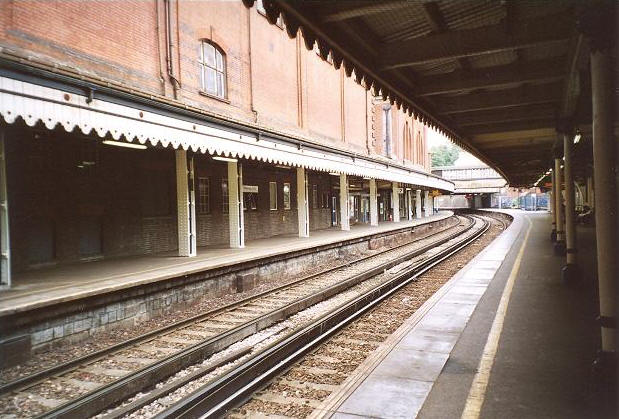 This southward view shows that this is an interesting station of architectural note, with the sheer

walls of the impressive station buildings dominating the scene. As can be seen in the distance, the

platforms and lines curve sharply to the left and plunge into yet another tunnel. Since the closure

of Tunbridge Wells West Station on 6th July 1985, all traffic to the town was transferred to the

Central station, even though it had fewer and shorter platforms. Two gypsum freights usually run

on this line every weekday. David Glasspool