With the completion of its Kent Coast trunk line between Redhill and Dover on 7th February 1844, the South Eastern Railway began spreading its network out into further areas of Kent by means of branch lines spurring off the aforementioned line. The first was that of Paddock Wood to Maidstone West, opening to traffic on 25th September 1844 and latterly extended northwards to join with the company's 1849-built North Kent Line, in 1856. The second of the concern's branches was that from Tonbridge to Tunbridge Wells, 5¾ mile miles in length and double-track from the outset, opening on 20th September 1845 to temporary accommodation at ''Jackwood Springs'', located on the town’s northern edge. This was then extended to what became ''Tunbridge Wells'' station on 25th November 1846, on completion of the ‘’Wells Tunnel’’ excavation. On reaching the town, alarm bells began ringing for the London Brighton & South Coast Railway; the SER's encroachment into this area, compounded by the fact that this company was now contemplating extending to Lewes, required immediate action. Thus, the LB&SCR set out to protect its interests and, if possible, rattle the SER by the planning of its own route to Tunbridge Wells. This began with the formation of the ‘’East Grinstead Railway’’ by an Act of November 1852. The independent concern laid a single-track line between Three Bridges and East Grinstead, this coming into use on 9th July 1855 - the company was subsequently absorbed by the larger LB&SCR. This was then followed on 18th October 1858 by the opening of a branch from Lewes to Uckfield, again built by an independent concern, this known as the ‘’Lewes & Uckfield Railway’’ (incorporated in 1857). The LB&SCR relied on the creation of local independent companies to forge its route to Tunbridge Wells. Two further concerns appeared on the scene in 1861 and 1862, these being the ‘’Brighton, Uckfield & Tunbridge Wells Railway’’ and the ‘’East Grinstead, Groombridge & Tunbridge Wells Railway’’ respectively. It was the single-track line of latter company which opened as the first branch to Tunbridge Wells (LB&SCR), such occurring on 1st October 1866. The line from Uckfield came into use on 3rd August 1868, joining the earlier branch at Groombridge, and both of the small companies had previously been absorbed by the LB&SCR in 1864.

The proposed site of the LB&SCR’s terminus was merely ¾ mile south west of the SER station, at the end of the 1866 branch from East Grinstead. Before the company submitted its proposals to Parliament for consideration, it had envisaged a terminus affair at the Spa town. However, Parliament had other ideas, and as a condition of passing an Act for the line in 1864, it was decreed that a single-track connecting spur between the LB&SCR site and the SER station was a must. By the time the LB&SCR had set the wheels in motion for line construction (having, as aforementioned, absorbed the independent companies in 1864), the SER’s station within the Spa town was already a sight to behold, with beautifully crafted canopies and an imposing clock tower. The LB&SCR had to better this, or at least equal it in aesthetic impact - this the company would do well in. The LB&SCR’s complex was a large one from the outset; therefore, it comes as a surprise that there were only two platform faces in evidence, and only one of which was used by the company’s own services. The single platform surface was positioned on the northern side of the site: the main face served those LB&SCR trains coming off the Oxted, Uckfield, and East Grinstead lines. The second platform face served an eastward-facing bay line, intended for use by SER shuttle services from the latter’s nearby station. However, despite Tunbridge Wells (LB&SCR) being a through affair as a result of the connecting spur, it was still operated as a terminus. No passenger services between the two were in evidence for an entire decade, and only the occasional freight train had been utilising the spur since 1867. The 1st February 1876 marked the beginning of limited passenger services between the rival companies’ networks via the spur, but it was not until the Grouping that any significant improvement in frequency transpired.

A single platform surface may have seemed somewhat meagre for a station aimed at rivalling its older neighbour, but there were certainly no half measures taken when it came to establishing an iconic station building. Looming over the platform was a structure resembling a Gothic manor house, formidable in appearance and demonstrating some of the best architectural characteristics of the era. The building was fundamentally constituted of three parts: the largest section in terms of area was two-storeys high, topped with a pitched roof, and was red brick in construction. This formed the ticket office and waiting rooms on the ground floor, with the Station Master’s accommodation being provided for upstairs. Attached to the western end of this was a two-storey extension, but incorporating a perpendicular pitched roof. The ground floor window frames were distinctly arched, featuring patterned brickwork, whilst the first floor counterparts were instead rectangular in appearance. Despite this, the latter still received pattern brickwork on their upper edges. The third and most recognisable section of the building was the clock tower, four storeys high at its tallest point and featuring arched windows on both ground and first floors. Aesthetically, it seemed to better its counterpart on the ‘’down’’ platform of the SER station. The latter was more simple in its construction, featuring fairly basic brickwork, this of which was lined on its corners with Portland stone. Furthermore, bell grills featured on the tower rather than the attractive patterned circles and window frames demonstrated by the LB&SCR’s work. It is worth pondering, however, over whether the LB&SCR would have still included a quite striking clock tower if such a structure had not been present at the SER site. Extending from the southern elevation of the LB&SCR's station building was an attractive canopy, demonstrating a ''spiked'' valance and supported by intricately detailed stanchions worthy of admiration. 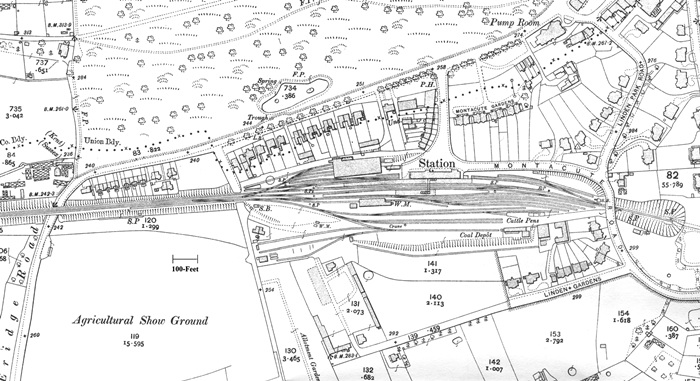 Ordnance Survey from 1907 of Tunbridge Wells (LB&SCR) at its prime. The tracks run from east to west. The engine shed in evidence replaced an earlier affair situated south of the running lines. To the east (right) of the map can be seen the single-track connection leading to SE&CR metals, through Grove Tunnel. Click the above for a larger version. 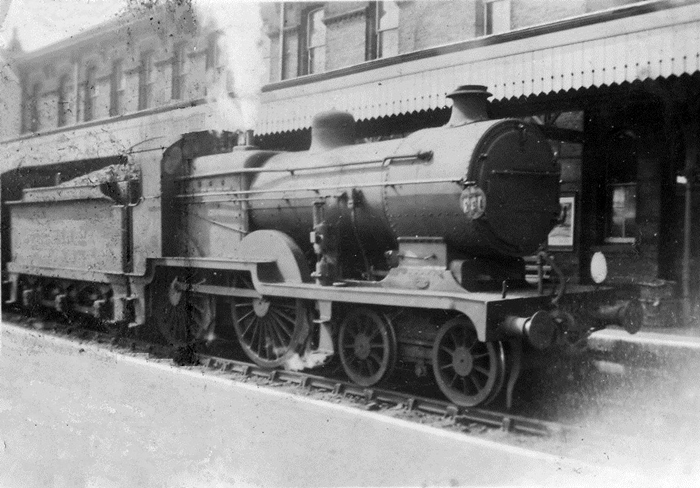 On 28th July 1949 E1 Class No. 245, still in the Southern Railway livery and numbering system, is seen alongside the main station building. These locomotives were the mainstay of Kentish routes until the end of steam in the county. © David Glasspool Collection 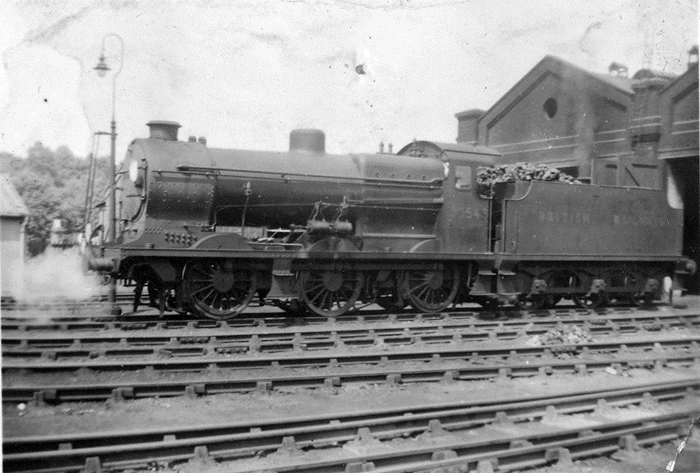 Q Class 0-6-0 No. 30543 is depicted outside Tunbridge Wells West shed on 28th July 1949, wearing the early ''British Railways'' legend. The Victorian roof design of the engine shed was replaced by British Railways in the 1950s by an asbestos equivalent. Also from 1951, BR Standard 2-6-4 Tanks, LMS Ivatt 2-6-2s and Fairburn 2-6-4s arrived in force. © David Glasspool Collection