One of the more elaborate stations on the Medway Valley Line, Wateringbury opened on 25th September 1844 with the first half of the route between Paddock Wood and Maidstone (SER): this was the South Eastern Railway's first branch line. Like its neighbour at Yalding, the stop was merely a selected location where passengers could join or alight from a train and no proper facilities were provided. Until the branch was doubled some two years later, passengers had to make do with wooden planks bridging the gap between the ground and the carriage - certainly economical! However, this situation soon changed - quite literally to the opposite extreme - and an imposing station began rising up above brick-built platforms. Mock Tudor in design with tall stacked chimneys, the structures in evidence were somewhat reminiscent of London & South Western Railway architecture later found west of Salisbury, but the station's design would no longer be unique on the opening of nearby Aylesford some twelve years hence. The fundamental style of the main building at Aylesford did in fact replicate the design of Wateringbury, but the difference between them is indeed obvious: the former was built from ''Kentish Ragstone'', but the latter constituted of red brick - it would feel at home in the environs of Hampton Court! There was also an interesting addition at Wateringbury, not found at local Aylesford when opened: a large two-storey Station Master's house. It is evident that the SER were endeavouring to create a favourable image among the travelling public, perhaps as redemption for the first meagre facilities!

The station was not without SER modesty, however, the platforms here being in a staggered formation and the ''down'' side playing host to a diminutive timber waiting shelter. Good facilities were also provided in the form of a double-track goods shed, which for many years handled considerable levels of traffic for the village's own ''Phoenix Brewery'', opened in 1843 by Fredrick Leney. Despite the grand nature of the buildings, the station was never provided with a footbridge, the track-level crossing sandwiched in-between the platform ends having been used from the outset. A signal box was not provided on the site either until about 1892, when Saxby & Farmer built an example on the railway company's behalf - manual level crossing gates had also been provided.

The station changed little over the years, although services to and from the North Kent Line were possible from 1856 onwards after an extension from Strood to Maidstone (SER) was opened. With the advent of electrification between these two locations on 2nd July 1939, most of the services were steam-powered push-pull between Maidstone, Paddock Wood and Tonbridge, all places of which connections could be made with main line trains. As part of the Kent Coast Electrification Scheme, installation of third rail along the Medway Valley began in 1960. It was deemed that now was the time to provide Wateringbury with a footbridge, in light of the hazards of crossing the line with third rail in close proximity. The footbridge was no architectural gem - in fact, it was plain and boring to the point of ugliness, emphasised somewhat by the splendour of the adjacent gabled station buildings. The Medway Valley Line became ''live'' on 12th June 1961, but goods traffic at the station lasted until at least 1963. For many years after the demise of steam, the route still had much charm, not only because the original station structures remained, but also due to the retention of semaphore signals. However, a line re-signalling programme got underway in earnest in December 2004 and by October of the following year, colour lights were controlling the line. 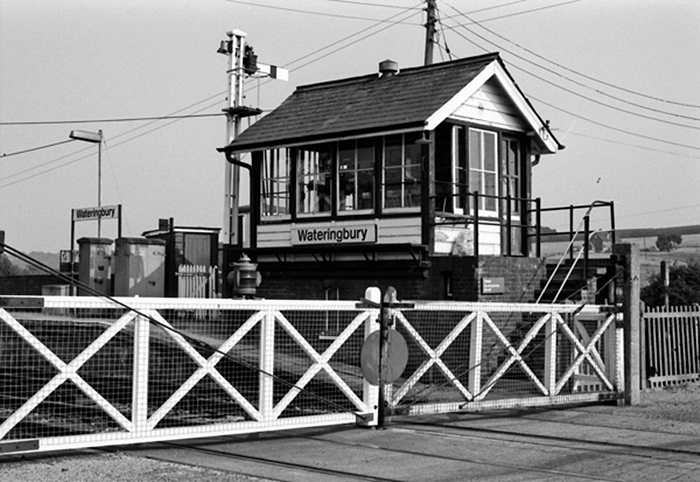 The splendid Saxby & Farmer signal box is witnessed in 1983, complete with manual level crossing gates and

the ''down'' Home Starter signal. Chris 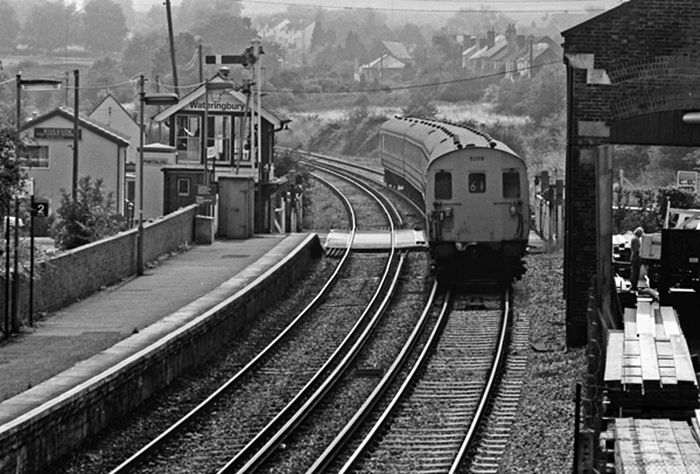 code 61). It appears that at this time, the goods shed was used by a timber merchant. Chris 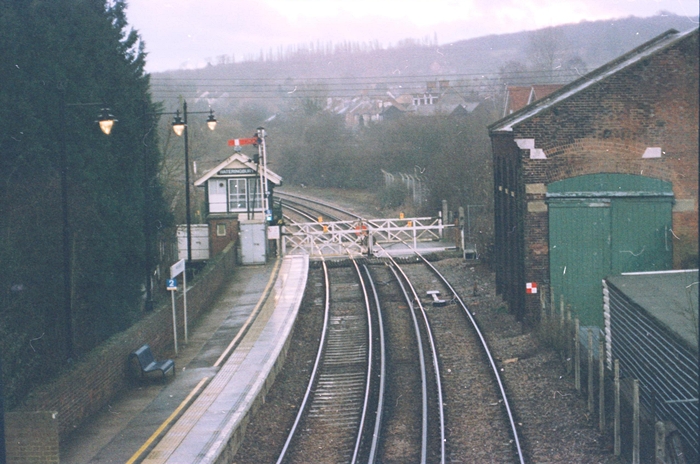 Fast forwarding to a very wet day in 2005, we see the quaint signal box still in existence, complete with semaphore

signal and manual gates. By this time, period lampposts had appeared on the platforms, and the signal box was