A decidedly rural landscape on the arrival of the railway, the most significant and, indeed, oldest feature in the vicinity was Lessness Abbey. Completed in 1178, the complex fell into disrepair over the subsequent 350 years, as a result of limited funds to maintain its upkeep. Rebuilt in the early 16th Century, its renewed existence was short-lived, for the dissolution of the monasteries under Henry VIII saw its closure and subsequent sale. It was the latter which resulted in the majority of the colossus being demolished and the stonework being reused in alternate structures, but its foundations remain in existence to this day. The Abbey was on a par with Rochester Cathedral – the bell tower, the steeple, and the main church were virtually identical in appearance. Naturally, the railway was of much later origin, and the original North Kent Line did not open until 30th July 1849, a station at Abbey Wood, as the locality was now known, coming into use on the same date. Through the area, the North Kent Line followed a course along land formerly submerged underneath the Thames. However, since the earliest days of the monastery, the process of reclaiming land was underway – indeed, drainage of water from the surrounding area was one of the Abbey’s largest costs. Compared to the former majesty and imposing nature of Lessness Abbey, the SER site was modest, if not insignificant, but at least the station had been provided at a time before the company’s ‘’economical’’ policy. Thus, noticeable brick content would be evident within the station’s construction, giving the site a more ‘’permanent’’ air about it.

Abbey Wood was an exposed location in the Victorian era, therefore the area’s then small population was treated to more than adequate weather protection at the station. The main building was situated on the ‘’up’’ side, was constituted of the customary SER yellow brick, and was single-storey with a pitched roof. Interestingly, the building entrance was situated on the side (eastern) elevation, rather than the more common rear doorway; this allowed a siding to run directly behind the station building. Attached to the main building’s northern elevation and covering the platform, was a flat-roofed canopy with an intricate valance, the latter to the same design as that which is still evident on the former goods shed at Appledore. The ‘’down’’ side was provided with a much smaller timber waiting shelter with an upward slanting roof, but even this demonstrated a canopy valance identical in pattern to that on the ‘’up’’ side. No footbridge was provided, but a level crossing, immediately to the east of the platforms, allowed passage over the lines. A lattice footbridge later came into use to the immediate east of this, but the platforms still did not receive such a structure.

Goods facilities merely consisted of the aforementioned westward-facing single siding, which terminated behind the main ‘’up’’ side station building. No form of goods shed was erected, but an additional refuge siding was in evidence. The latter was situated immediately east of the level crossing, leaving the ‘’up’’ track and, again, was westward-facing. Controlling this layout was a two-storey high all-timber signal box, of typical SER design with sash-style windows (see Snodland). This opened about a quarter of a century after the station.

The Southern Railway electrified the North Kent Line in 1926, but little else at Abbey Wood changed under this company’s ownership; it would be the British Railways era which would herald the greatest of alterations. In 1956, lengthening of the platforms at their London ends commenced, utilising prefabricated concrete delivered from Exmouth Junction works. This allowed the station to accommodate ten vehicle EPB formations on the verge of being introduced, to alleviate overcrowding - such train lengths came into use on the route during 1957. The platform extensions also brought electric lighting, supported on concrete bracket posts. Shortly after, on 5th December 1960, the sole goods siding behind the main station building was taken out of use. Unfortunately, circa 1968, the ''down'' side at Abbey Wood was to suffer from BR's ''modern image'' - the delightful SER waiting shelter was replaced by a soulless glazed bus shelter, this of which was virtually identical in design to that still in evidence on Bexley's ''up'' side. The main station building, the SER-designed signal box and, of course, the level crossing, remained as traditional features of the site. However, the advent of the Dartford Panel saw the SER cabin reduced to the status of a mere gate box, such occurring on 25th October 1970. 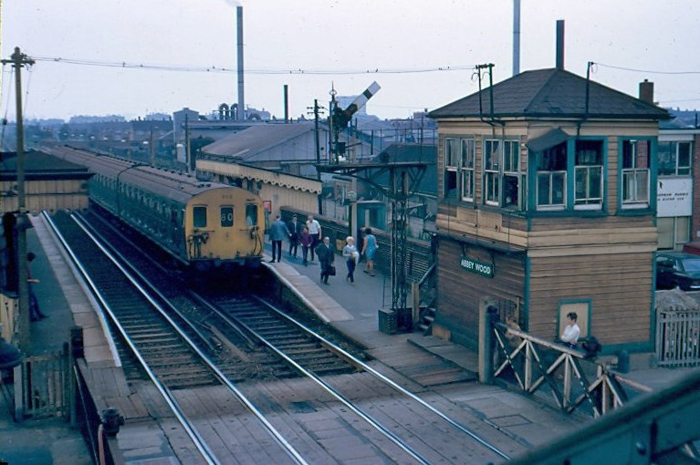 A scene which is unrecognisable compared with today, when traditional lattice crossing gates and semaphore signals still reigned supreme. A Bulleid-design 4-EPB is seen at the "down" platform with a service from Charing Cross, bound for Dartford - the "down" starter shows "clear" and the crossing gates are closed against the road, so our train is ready for the "off". The all-timber signal box was a typical SER creation, comprising this company's trademark sash-style windows and hipped slated roof. It appears that the signalman had a mirror affixed above the window nearest the level crossing, presumably used to check for pedestrians and traffic below. SER architecture also survived on both platforms at this time; the clover-patterned canopy valance of the "up" main building can be seen creeping in on the left, whilst the "down" side shelter is looking decidedly spruce. BR influence is evident on the platforms in the form of the concrete bracket lampposts and hexagonal lampshades, which were installed during 1956 platform lengthening. © Tom Burnham 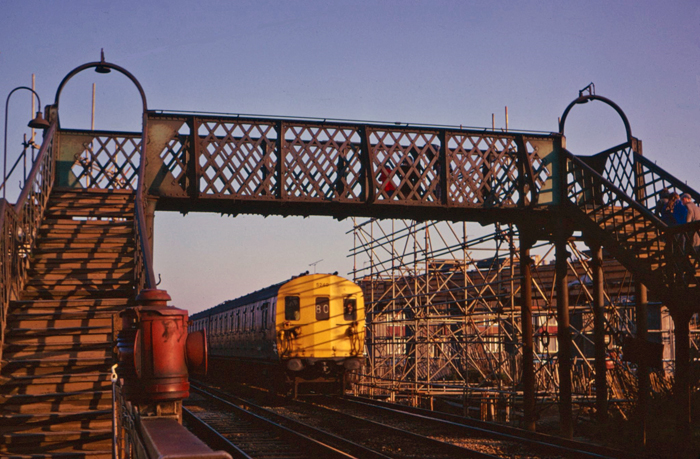 The scaffolding being erected behind the footbridge, at the eastern end of the station, was in preparation for the building of the level crossing's replacement: the Harrow Manorway flyover. Completion of this resulted in the closure of the signal box and level crossing on 13th July 1975. 4-EPB No. 5240 was forming a Dartford to Charing Cross via Greenwich service. © Tom Burnham 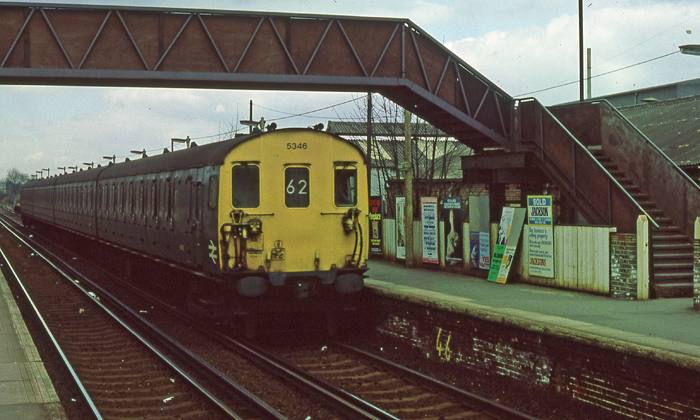 BR-designed 4 EPB No. 5346 is seen arriving with a Charing Cross to Gillingham service. The footbridge was a span salvaged in 1977 from the Blackfriars station rebuilding. Even this late on, Abbey Wood retained BR(S) Sausage Totems. © David Glasspool Collection