Until now this has been an unspectacular commuter station in the South East London suburbs, a 1992 rebuild of a rather more interesting SER site of 1849 origin. Soon, however, it will become a four-platform interchange between North Kent Line services and trains to Maidenhead, Berkshire. This, of course, is being made possible through the "Crossrail" project.

The Crossrail Bill was submitted to Parliament on 22nd February 2005, this of which finally received Royal Assent on 22nd July 2008:

During a consultation period in 2004, four areas of the Crossrail route were identified:

This encompassed that section of line from Maidenhead and Heathrow Airport to Royal Oak, the latter being the point where trains would enter/exit the proposed tunnel under Central London. Intermediate stations at Taplow, Burnham, Slough, Langley, Iver, West Drayton, Hayes and Harlington, Southall, Hanwell, West Ealing, Ealing Broadway, and Acton Main Line, would be served by Crossrail trains.

Newly-laid sidings at Old Oak Common and the former goods and coal yards at Maidenhead and West Drayton respectively, would be used to stable Crossrail stock. Given that the latter was of electric propulsion, that section of the Great Western Main Line between Airport Junction and Maidenhead would receive overhead wires.

This was defined as that part of the line within 14 miles of twin tunnel bores buried under the capital. New stations would be opened at Paddington, Bond Street, Tottenham Court Road, Farringdon, Liverpool Street, Whitechapel, and Isle of Dogs. In-between the latter two, the route would split into two lines, the Great Eastern and Kent Corridors.

As per its Great Western counterpart, Crossrail trains here would share the same lines as existing services. Access to the Central Area would be through a tunnel portal at Pudding Mill Lane, Stratford.

Sidings for Crossrail stock would be available at Gidea Park and Shenfield, and a new depot at Romford was proposed. Stations at Stratford, Forest Gate, Manor Park, Ilford, Seven Kings, Goodmayes, Chadwell Heath, Romford, Gidea Park, Harold Wood, Brentwood and Shenfield, would be served by the new trains.

The original proposals for this part of the route were cut back to the extent of almost non-existence. Initially, the line here was supposed to run from Custom House, after which it would dive under the Thames at North Woolwich, resurface in Plumstead, and make a connection with the North Kent Line at Abbey Wood.

Between Plumstead and Abbey Wood, the line would be four-track; the existing double-track North Kent Line would be flanked on either side by the Crossrail lines. Abbey Wood station would be completely rebuilt to accommodate an additional two platform faces, lifts, and escalators. Reversing sidings for Crossrail stock would also be laid here and overhead wires erected.

Beyond Abbey Wood, Crossrail services were planned to go as far as Ebbsfleet. Here, a new Crossrail station would be opened, providing an interchange with the international station on the CTRL's Section 2 (then under construction). Belvedere, Erith, Slade Green, Dartford, Stone Crossing, Greenhithe, and Swanscombe stations would be beneficiaries of the new Crossrail trains. New sidings were also proposed at Slade Green. 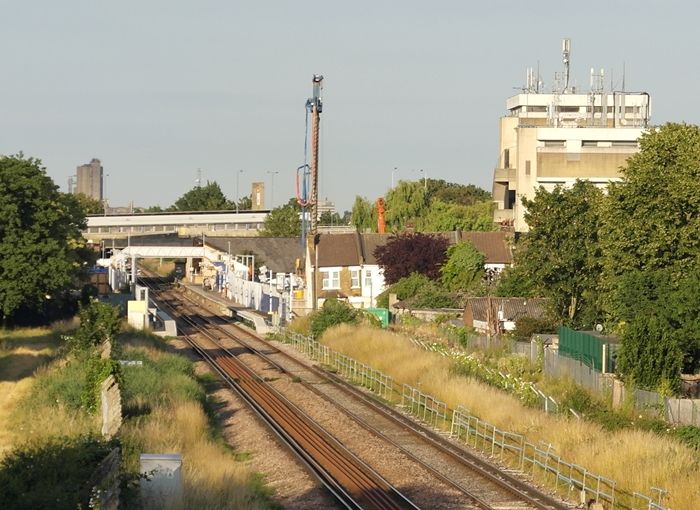 The tall drill in the centre of this eastward view is situated within the former station car park. This has been earmarked as the site of the temporary station during rebuilding works. The two houses at the end of the Victorian terrace are scheduled for demolition, to clear the way for additional lines. © David Glasspool 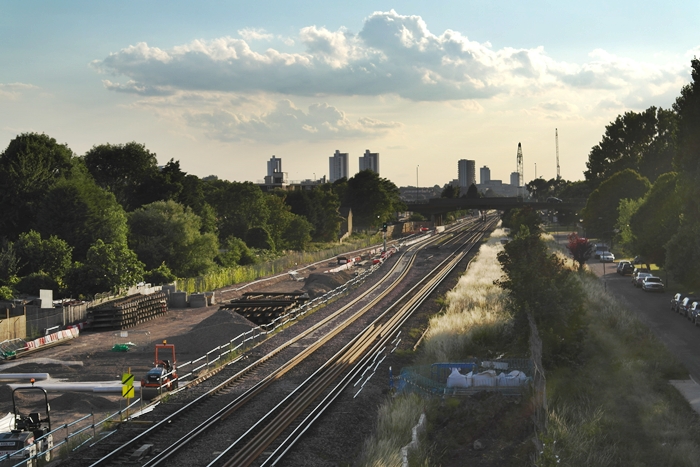 A westward view, looking towards Plumstead, shows track bed widening to have taken place on the ''up'' side. The ''up'' line has been slewed on a new, more southerly alignment. © David Glasspool 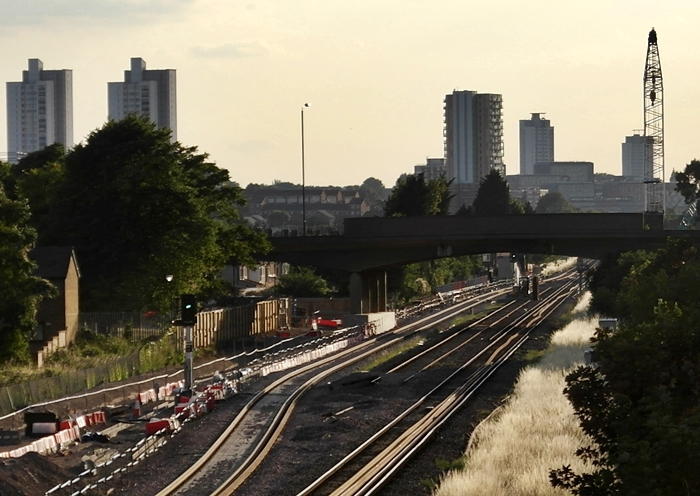 A second westward view shows the redundant track of the original ''up'' line still in situ. Beyond the bridge, the new track can be seen re-joining the existing alignment. Also in view, beyond the bridge, is one of the concrete supports of a new footbridge under construction. © David Glasspool