This station was at the end of a once important appendix of the SER's suburban system, and allowed this company to penetrate the boundaries of the LB&SCR's Croydon territory. The beginnings of the branch line to Addiscombe lie with the Mid-Kent Railway, formed on 23rd July 1855 to construct a 4¾-mile double-track line between the SER at Lewisham and the Farnborough Extension of the ''West End of London & Crystal Palace Railway'', at Beckenham. The company was authorised to raise a capital of £80,000 in shares, augmented by a further £25,000 in the form of loans, a total of £105,000. The line opened to public traffic on 1st January 1857 and under a clause of the original 1855 Act of Incorporation, a working agreement was made with the SER, whereby this company would run the services and maintain the line for 50% of gross receipts. The Mid-Kent and SER Companies would also equally share profits, and the agreement would last for a period of ten years, after which it could be extended by a further term of ten years or less, subject to the Board of Trade's approval.

In February 1862, the Mid-Kent Railway applied to Parliament to extend its line from Beckenham to Addiscombe, a distance of 3 miles and 40 chains. £35,000 was to be raised by the issue of shares, and the project mortgaged to provide a further £11,500. Royal Assent for the scheme was received on 17th July 1862, and on 13th July of the following year, the company was authorised to raise an additional £15,000 in shares and borrow another £5000. It was at this time that an agreement was made for the SER to purchase the Mid-Kent Company, on the conditions that the former paid the latter £120,000 for the existing share capital of £80,000 (thus, a £40,000 premium), in addition to taking on all preference shares and debenture debt. Thus, the Mid-Kent finally disappeared on 16th July 1866, as part of the ''South Eastern Railway (Mid-Kent Amalgamation Completion) Act, 1866''. In the meantime, the extension to Addiscombe had opened on 1st April 1864.

The terminus was commissioned as ''Addiscombe Road'' and began life as an unassuming affair, very much the typical rural station. Three platform faces and tracks were in evidence from the outset; two of these lines converged at the southern extremity of the site onto a turntable, an arrangement identical to those at the first generation Hayes and Bromley North stations. Crossovers at the northern ends of these tracks produced a run-a-round facility for terminating steam locomotives. The main station structures were positioned on the western (or, if you like, ''up'') platform, a third of the way down the surface, and well reflected the frugal character of the SER network at the time. Two buildings were erected side-by-side, one of yellow brick construction, the other of clapboard composition, and both had just a single-storey. The brick structure hosted a hipped slated roof and appears to have acted as the main booking office. It lacked a canopy, a feature with which its clapboard neighbour was so equipped, but even this was without the finesse of other SER canopies: it was a pitched-roof affair supported upon five cast-iron struts, and was provided with no decorative valance of any description. A waiting room and Gentlemen's toilet could be found within the wooden building, this of which also sprouted a pair of brick-built chimneystacks. This was a simple layout which lacked a goods yard and sidings, and was situated at milepost 11 from London Bridge.

By 1881 the station had been renamed ''Croydon (Addiscombe Road)'', and by 1890 there had been some additions to the site. A short siding, complete with catch points, now trailed off the ''up'' line, north of the platforms, and a pair of signal boxes had come into use. The first cabin controlled the aforementioned run-a-round loop, and was situated opposite the bay platform line, near the station buildings. The second cabin was a smaller affair, situated north of the platforms, and appears to have operated a trailing crossover between ''up'' and ''down'' lines, and controlled access to the short siding. During the 1880s, the fields which lined the terminus' western perimeter were partially given over to new housing development. By the turn of the century, further grassed areas were being built on, and passengers numbers at the station increased steadily.

The SE&CR Joint Managing Committee was formed in 1899, and in this year an earnest attempt was made to provide this north eastern suburb of Croydon with a stylish terminus. The existing Addiscombe Road station was wholly abolished, but the fundamental arrangement of just three platforms was retained. The station seemingly became a terminus proper with the construction of a new main building at the head of the platforms, which required the re-location of the turntable to the north of the site. Between the road and main building existed an attractive courtyard, lined on three sides by iron railings, the front section of which featured two pairs of imposing gates sandwiched in-between substantial brick columns. The architecture was typically SER: the new station structure was of red brick construction and demonstrated the same semi-circular window frames as those which could be found at Chislehurst, Ashford, and Waterloo Junction stations. The building was essentially formed of three sections, the central portion of which housed the main booking hall. This featured a prominent hipped slated roof, topped off with ornate ironwork, and each side it sprouted appendices housing the ticket office, parcels, and left luggage rooms. These two appendices each featured shallow hipped roofs surrounded by a brick border; thus, from ground level, these sections looked flat-roofed. Between the platforms and main building now existed a light and airy concourse, fully covered by a ridge-and-furrow roof, and protection from the elements thereafter was perpetuated by a pair of splendid canopies. Platforms were numbered 1, 2, and 3 from west to east (left to right facing London); Nos. 1 and 2 formed a terminating island surface, whilst No. 3 was a side platform lined at its rear by a two-storey-high yellow brick wall. Canopies were of ridge-and-furrow design, supported upon frames of lattice ironwork, and the timber valances demonstrated the SER's trademark, and intricate, clover pattern. The canopy over platforms 1 and 2 extended for a length of 350-feet, whilst that on platform 3 was shorter, at 220-feet long. 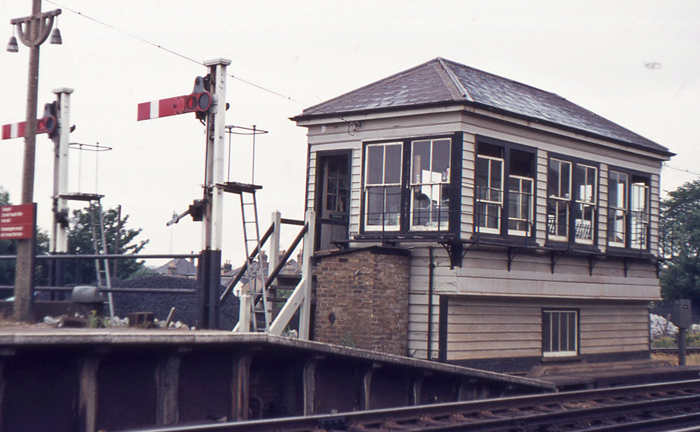 Addiscombe managed to avoid being absorbed into the control of the London Bridge Signalling Centre and, until 1996, retained its signal box of SER design and semaphores. This view includes a concrete double-bracket lamppost from the 1957 platform extension works and, alongside the signal box, a brick structure which is thought to have housed a staff toilet. © Roger Goodrum 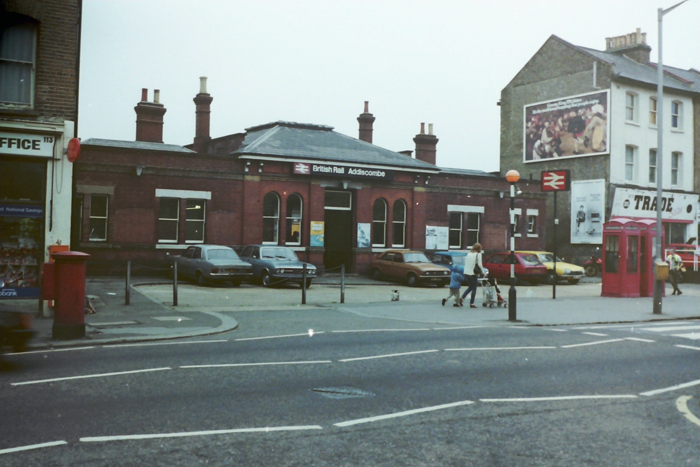 The main booking office dated from station rebuilding in 1899, but the architecture was familiar, showing traits of earlier, larger structures at Chislehurst and Ashford. © Kevin McArdell 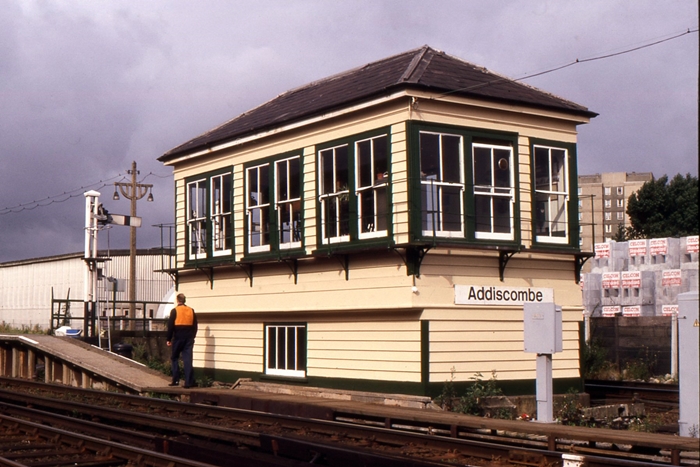 At its peak, the signal box was host to a 44-lever frame. It was tragically destroyed by an arson attack in March 1996, although no doubt would have met its destruction anyway as part of the station closure. © Roger Goodrum 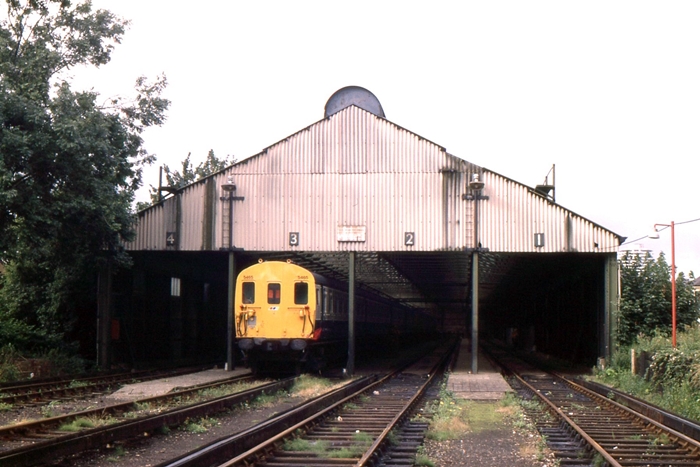 On this occasion, the carriage cleaning shed was host to 4 EPB No. 5465, which our photographer had just worked in empty from Charing Cross. © Roger Goodrum