In spite of track rationalisation and canopy removal, this remains a worthy station for the historic town of Battle. It came into use on 1st January 1852 when a six-mile southward extension from Robertsbridge opened, and was the temporary terminus of the route until through running to Hastings commenced exactly one month later. The main building was erected on the London-bound platform, and was a splendid Gothic affair built in sympathy with the nearby Battle Abbey. It was designed by the SER’s Surveyor, William Tress, who was not only responsible for all those stations which originally opened between Tonbridge and Hastings, but also those between the latter and Ashford. The structure at Battle was asymmetric, with a pair of two-storey pitched roof sections connected in the middle by a transverse roof with a dormer. Grey stone was used in construction throughout, as per sister buildings at Frant and Etchingham, and the narrow arched windows and Caen stone dressings made this look more like a church than a railway station.

In true SER fashion, the platforms here were staggered and in the early days, there was no platform weather protection on either side, save for the arched lobby of the booking hall. Passengers were also required to cross between platforms on the level. 250-yards north of the station existed a level crossing, Marley Lane, and for this a bungalow was built for the crossing keeper. This existed on the ‘’down’’ side of the line, on the south side of the crossing, and was near identical in design to that bungalow which still exists alongside the crossing at Appledore.

Goods facilities were spacious and seven sidings were spread around the layout. The goods yard was positioned on the ‘’up’’ side, behind the main building, upon what is today’s car park. Four northward-facing sidings existed here, running at about twenty degrees to the main line. One of these ran into a 55-foot-long goods shed, whilst a second was flanked to its west by coal staithes. The layout is illustrated in the below map, but it is worth mentioning that many of these sidings did at one stage incorporate small wagon turntables. There were six such turntables at the site: four in the goods yard, flanking the shed on three sides, and two either side of the track foot crossing.

Battle was temporarily closed on 8th March 1855 when Mountfield Tunnel, between there and Robertsbridge, partially collapsed. At this time, the SER discovered that the private contractor responsible for the work had severely cut corners. This prompted inspections of other tunnels along the line, and it was found that the contractor had lined the bores with too few layers of bricks. Remedial work on the tunnels by the SER allowed Battle to reopen to traffic on 30th June 1855, but thereafter remained a legacy of a very restricted loading gauge via Tunbridge Wells.

When the station first opened, a small timber hut at the northern end of the ‘’down’’ platform, alongside the track foot crossing, housed the signalman. Then, in about 1885, the SER re-signalled layout. The small timber hut was replaced by a pair of SER-designed signal boxes of clapboard construction, both of which featured this company’s trademark sash-style windows. One of these cabins was located 125-yards north of the previous timber hut, on the ‘’down’’ side of the line, whilst the second was erected next to the level crossing. They became Nos. 2 and 1 cabins respectively, and the re-signalling scheme also saw abolition of the wagon turntables.

As a result of more stringent Board of Trade legislation, footbridges had to be provided at numerous existing stations. A lattice example was erected at Battle circa 1890, linking both platforms at the site of the track foot crossing. About a decade later, further station improvements were made. An 85-foot-long canopy was erected on the ‘’down’’ side, built to the same arched profile design which still exists at Paddock Wood. Attached to it was a brick-built Gentlemen’s toilet, and between this and the lattice footbridge was also erected a store. This was single-storey, of red brick construction, with a hipped slated roof and sash-style windows. The ‘’up’’ side also received a nice new canopy, attached to the main building. This was 120-feet-long, complete with the trademark SER/SE&CR clover-patterned valance, and shared the same arched cross-section demonstrated by that on the ‘’down’’ platform.

A map of 1930 still shows the outline of cabin No. 2, but it is no longer marked ‘’S.B.’’, which suggests it was closed by the Southern Railway in the previous year. No traces of the signal box were in evidence by the time of the 1937 map. During the same decade, the SR also partially rebuilt the ‘’up’’ side canopy: the arched profile was replaced by a downward-sloping design, but the attractive clover-patterned valance retained. ‘’Target’’ platform signs were introduced, as were the SR’s splendid trademark Swan Neck gas lamps.

Naturally, the British Railways era was one of modernisation and gradual decline. Goods facilities were formally withdrawn on 2nd October 1966, but coal continued to be handled in the yard on the ‘’up’’ side, and the station held onto its sidings. It was around this time that the SR Swan Neck gas lamps were replaced by electric lighting, supported upon plain metal posts, and black and white name boards introduced. As of 1976, the station had lost just two sidings, both formerly serving the ‘’up’’ side goods yard. The yard still retained another pair of sidings, in addition to its shed, although tracks no longer entered the building. Refuge sidings continued to flank the running lines on both sides and both platforms retained all major infrastructure.

The scene had changed by 1984. All ‘’down’’ platform structures had been demolished, being replaced by a single ‘’bus shelter’’, and all sidings lifted. The goods shed was, too, demolished to make way for a car park, but thankfully the ‘’up’’ side station building, complete with canopy, remained untouched. The lattice footbridge and SER signal box also remained, but the level crossing had lost its lattice crossing gates in favour of lifting barriers. That, however, was not the end of the modifications and in 1985, preparations were made for electrification. This included the extension of the ‘’up’’ and ‘’down’’ platforms at southern and northern ends respectively, losing the truly staggered effect. Semaphore signals finally gave way to colour lights and on 22nd March 1986, Bopeep Junction signal box took over the functions of the cabin at Battle. Sunday 27th April 1986 marked the first day of electrified services to Hastings, via Tunbridge Wells. 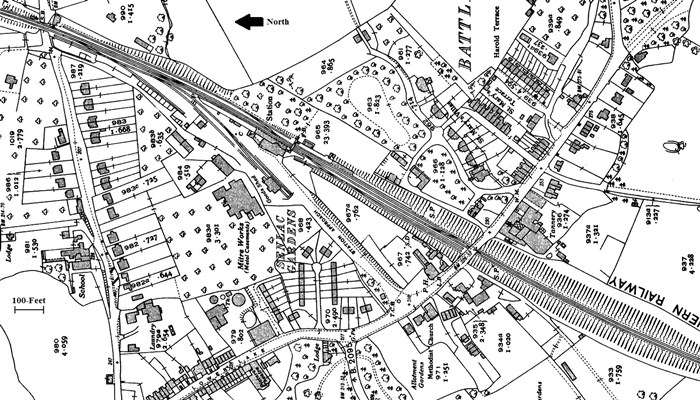 Battle station under the Southern Railway: click the above for a larger version. 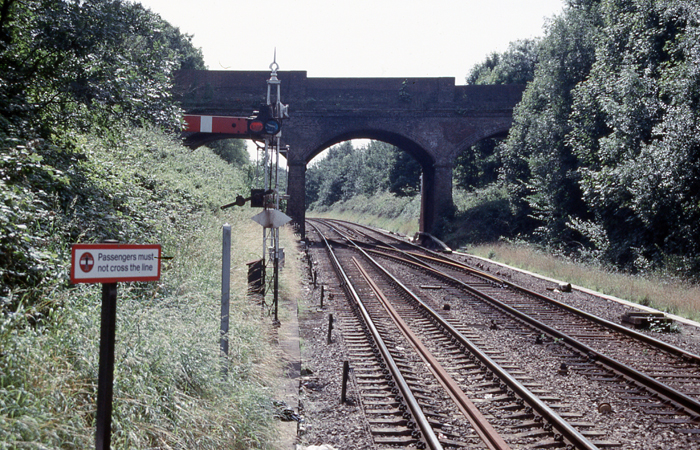 A southward view shows the trailing crossover and "down" starter semaphore signal, less than a year before the latter was made redundant by colour light operation. © David Glasspool Collection 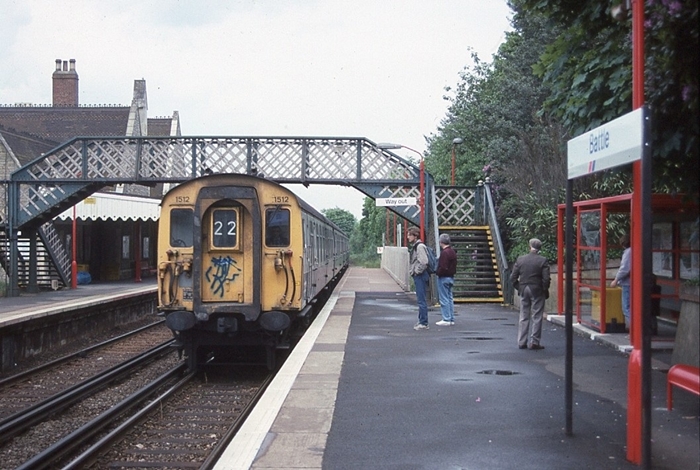 Wearing BR Blue and Grey, 4 Cep No. 1512 rumbles into Battle with a Hastings service. The bus shelter-style structure on the right stood upon the former site of a storeroom. © David Glasspool Collection 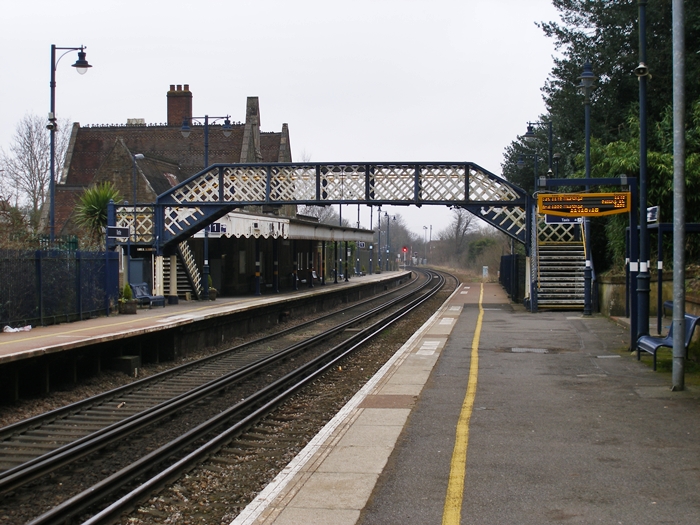 A northward view from the ''down'' platform shows the classic SER lattice footbridge and, naturally, the pitched roofs of Tress' masterpiece. The main building retains ornamental ironwork upon the top of each roof pitch, and keeps the canopy installed by the SE&CR, but modified by the SR. The later platform extensions are in evidence and period-style lighting, the latter installed in about 2004. In the distance is Marley Lane crossing. © David Glasspool