This was once an attractive and rather spacious terminus, located at the end of a 4½-mile-long branch line feeding off the ex-SER’s Hastings route via Tunbridge Wells. Bexhill-on-Sea had been served by the LB&SCR since 27th June 1846, during an eastward push from Brighton to Hastings, but the company offered a rather circuitous route to this part of the Sussex coast from London Bridge. The SER later forged the shortest line to Hastings, bypassing the long trip via Ashford and instead pursuing a more direct course southwards from Tonbridge. The direct line via Tunbridge Wells opened to through traffic on 1st February 1852, bringing London Bridge within 73-miles of Hastings, via Redhill.

Fast-forwarding to the late 19th Century, Charing Cross was 63-miles from Hastings, via Sevenoaks and Tunbridge Wells. This compared favourably to the mileage from Victoria, via Lewes, of 76. Indeed, it was not until this time that Bexhill-on-Sea started to develop as a holiday resort. The strip of coastal land through the locality was owned by Lord De La Warr, who commissioned a house building programme to put Bexhill firmly on the map. The development of the area advanced rapidly and as the town evolved into a holiday resort, the ‘’Crowhurst, Sidley & Bexhill Railway’’ emerged. A nominally independent concern, its Bill was deposited to Parliament on 30th November 1896 and the company was formally authorised on 15th July 1897. Lord De La Warr became Chairman and Arthur J. Barry was appointed engineer.

Five years passed by before the line was ready for use: formal opening occurred on 1st June 1902, the branch being worked by the SE&CR from the outset. The station was known as ‘’Bexhill-on-Sea’’ at this stage and no expense was spared on the construction of the line or terminus. From Crowhurst Junction to Bexhill-on-Sea, the double-track line descended 126-feet, dropping at 1 in 90 for the first mile. A mammoth feat of engineering was Crowhurst Viaduct, positioned 1½-miles from the junction with the SE&CR main line. This comprised seventeen 52-foot-wide arches within a length of 1,251-feet, carrying the rails to a height of 67-feet. Nine million bricks were reportedly used during construction, and its foundations were sunk into marshland. One intermediate station at Sidley was brought into use, one mile from the end of the line.

The terminus at Bexhill was of generous proportions, comprising four platform faces of 660-feet length. These were arranged in the terminating island fashion, with each pair of platform faces being separated from each other by three tracks. Interestingly, just one of these islands received a platform canopy; maps of the layout suggest that a second may well have been intended, but the surface was instead lined with lampposts. The canopy was 125-feet long by 35-feet wide, and was built to a standard design – indeed, virtually identical examples were in use at Addiscombe and London Bridge. A minor design difference was that the canopy valances at Bexhill did not feature the ‘’clover’’ patterned holes seen universally across the SE&CR network. The canopy backed onto a vaulted-roof concourse, 40-feet-wide by 130-feet-long, which in turn was attached to a neat symmetrical main building. This was perpendicular to the tracks, of red brick construction, frescoed with stone edges, and sported a centrally-positioned belfry. It featured a hipped red-tiled roof, and was not unlike those later, more modern constructions made by the Southern Railway at Broadstairs and Dumpton Park stations. Maps as early as 1909 show the western most platform, No. 4, without a track, which begs the question if it ever had one in the first place.

The terminus was host to spacious goods facilities and a plethora of sidings, which made it useful for rolling stock storage later in life. The goods yard ran along the eastern side of the station approaches, situated at about 40-degrees to the running lines. It featured a 140-foot-long goods shed, coal staithes, and cattle pens, all of which were served by lengthy sidings. The yard required a reversal manoeuvre to access, which was made possible by a double-track headshunt stretching the length of station. On the western side of the running lines, 175-yards north of the platforms, existed four carriage sidings. These were southward-facing and required a reversal in the station to access. Finally, also to the west of the terminus platforms could be found a two-road engine shed. This measured 125-feet by 35-feet, and was designed to house four tank engines. Of brick construction with a northlight-patterned-roof, the shed was accompanied by a water tank and offices along its western elevation. In addition, terminating engines could be rotated on a 55-foot turntable.

The Bexhill-on-Sea branch was signalled by contractor ‘’Evans O’Donnell’’, which erected three cabins along the line; one at Sidley and two at the terminus. The first at Bexhill was sandwiched in-between the station concourse and the terminating platform lines, and controlled the crossovers between these tracks. The second was an enormous affair, and would have looked more at home at a London terminus rather than at the end of a short Sussex branch line. It was 55-feet long, comprising a huge brick base and timber upper half, complemented with a slated pitched gabled roof. It housed 123-levers, the majority of which were spare, and could be found 440-yards north of the platforms, on the eastern side of the running lines.

Due to cutbacks made during World War I, the Bexhill branch was closed from 1st January 1917 to 1st March 1919, an economy inflicted on many stations network-wide. Pullman Kitchen Cars were introduced onto the Tunbridge Wells line by the Southern Railway in 1926 and for this, two gas cylinders were installed at the Bexhill terminus. These were sandwiched in-between the terminating platform lines and the smaller of the two signal boxes, and were used to refill the Pullman cars’ gas tanks. The station was renamed ‘’Bexhill West’’ by the SR in 1929 and remained the primary hub for Bexhill traffic for the time being. The emphasis changed in 1935, when electrification of those lines east of Brighton made the ex-LB&SCR Bexhill station the more important of the two, and services to the terminus started to decline. However, the SR’s primary line to Hastings was still considered as that from Charing Cross.

In November 1949, settlements were found in Bopeep Tunnel, between West St Leonard’s and Warrior Square stations. On 19th of that month it was decided to move forward with single-line working through the tunnel, to allow repairs to be made. The settlement quickly worsened, so much that it was decided to close the tunnel completely on 26th November 1949. Part of the tunnel was relined with cast iron segments and during closure, Hastings traffic from Charing Cross was diverted to Bexhill West, which still retained a turntable. Services on the Central Division line went as far as St Leonard’s West Marina, and from there buses linked all stations through to Ore. A rail shuttle service was also run between Crowhurst Junction and West St Leonard’s. Bopeep Tunnel was reopened to traffic on 5th June 1950.

For many years the branch relied on a push-pull shuttle from Crowhurst Junction, powered by ex-SE&CR ‘’H’’ Class 0-4-4 Tanks. This was then replaced by a diesel service in 1958, on the introduction of Hampshire/Berkshire multiple units. Previously, in November 1946, the SR had approved a scheme to electrify this branch and the main line to Hastings, as part of a much larger third rail project. However, this project was overtaken by nationalisation, and conversion of the Tunbridge Wells line to diesel operation was pursued instead. Sadly, continued decline was the order of the day for the Bexhill branch thereafter. The goods yard formally closed on 9th September 1963 and passenger services lasted less than a year beyond this date. The Minister of Transport approved closure of the line in May 1964, for a date which had yet to be specified at that time. This transpired to be the following month, and the last day of services along the Bexhill West branch was 14th June 1964.

Some traces of the line were quite quickly erased from the map – the track had been ripped up by summer 1965. Tragically, the splendid Crowhurst Viaduct was not saved for posterity and on 23rd May 1969, it was blown up with dynamite. At the terminus, the areas made vacant by the former platforms and approaches were swiftly converted into an industrial estate. The engine shed lost its ridge-and-furrow roof, but its brick walls survived. It was transformed into an industrial unit and still survives to this day. The main station building at the terminus has also been fortunate to creep into the 21st Century, and today the building houses both an auction house and restaurant. The platforms and canopy are long gone, but the vaulted concourse roof still remains intact. 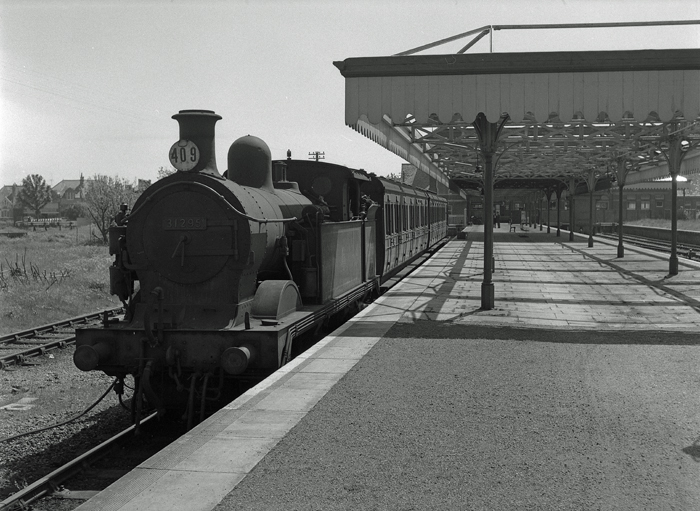 The canopy was built to very generous proportions, although in this view appears to be missing the roof. By the time of this photograph, a two-carriage shuttle service to Crowhurst, powered by an "H" Class tank engine (in this case No. 31295), was sufficient. Diesel-electric traction in the form of Hampshire/Berkshire units were introduced to the Bexhill West branch in the year of this photograph. The siding on the left was used to stable empty coaching stock. On the far right can be seen the long-disused second platform surface. © David Glasspool Collection 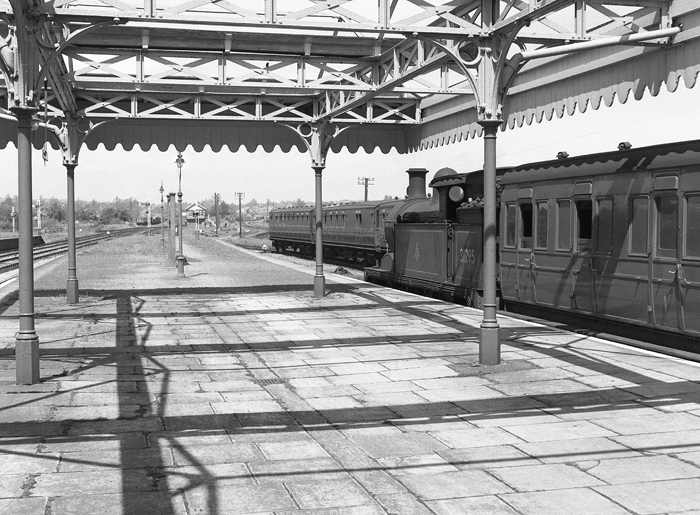 A north easterly view shows some fine canopy detail and station approaches akin to a main line terminus. Left of centre can just be glimpsed the end of the gigantic signal box. The goods yard is hidden behind the carriages stabled in the refuge siding beyond "H" Class No. 31295. © David Glasspool Collection 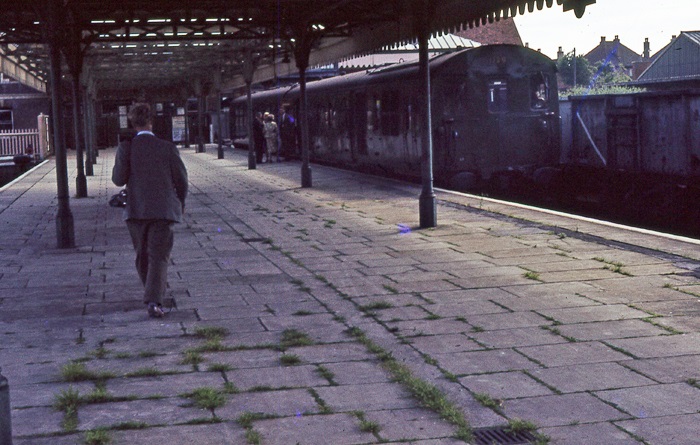 Steam traction had given way to Hampshire/Berkshire DEMUs by the time of this photograph, one of which is seen at platform 2. The long-disused second platform surface is hidden by the wagons on the right. © David Glasspool Collection