This was one of the busiest railway junctions in Britain, the modestly-sized signal box controlling over 100 train movements an hour during weekday peak times. Borough Market Junction was located at the eastern end of a tight triangle above the suburban rooftops, formed by the lines linking Charing Cross, Cannon Street, and London Bridge.

The South Eastern Railway (SER) had started operating out of London Bridge in May 1842, running trains as far as Tonbridge via Reigate Junction. A brief spell during 1844 saw the company use Bricklayers Arms as their terminus, during a financial dispute with the owner of London Bridge and its approaches, the London & Greenwich Railway (L&GR). The issue was remedied by the SER taking the L&GR out on lease, commencing midnight, New Year’s Eve, 1844. Thence, London Bridge remained the SER’s terminus for two decades until a short, expensive extension to Charing Cross was commissioned to public traffic on 11th January 1864.

The Charing Cross scheme was followed by another costly extension, under half a mile long, to Cannon Street. This opened to public traffic on 1st September 1866, the same day as the Dartford Loop Line via Sidcup. The SER now had termini in the heart of the West End and City of London, their construction no doubt being hastened by the rival London, Chatham & Dover Railway (LC&DR) reaching Victoria and Blackfriars (South Bank) in December 1860 and June 1864 respectively.

The triangle of lines created around Borough Market gave rise to the operating practice of reversing most Charing Cross services into Cannon Street, allowing a single train to serve both the West End and City. The triangle’s extremities were formed as follows: to the west, Cannon Street West Junction; to the north, Stoney Street Junction; and finally, to the east, Borough Market Junction. Three parallel-running tracks were laid on the eastern side of the triangle, two on the southern side, and three between Cannon Street West and Stoney Street Junctions.

On 28th July 1869, an eight carriage train (plus guard’s van) was passing over Borough Market Junction when the points changed, causing the two rear vehicles to derail, one of which toppled onto its side. In a Board of Trade Railway Department report of the accident, dated 10th August 1869, the set-up of the junction was described as follows:

The points and signals at the junction in question are worked on the locking principle and the signalman's hut, which is called the Borough Market hut, is provided with block telegraph instruments......

This train passed the Borough Market junction hut, which is about 20 yards west of the junction points, at 8:20 p.m.

Having looked at maps of the area dating back to 1875, your author cannot find reference to a signal hut just west of the junction. Rather, the maps show a signal box in the more familiar position 65-yards east of the junction, on the northern side of the triple track emanating from London Bridge. Maybe the location of the signal hut changed in the intervening years, or perhaps the map dates are not entirely accurate.

In 1895, a new signal box was commissioned at Borough Market Junction. This was positioned at the location just described: about 65-yards east of the junction, on the north side of the running lines upon the railway viaduct, 260-yards west of the platforms at London Bridge. This was a slim signal box, comprising a tongue-and-groove timber cabin with sash-style windows, built to an SER design, perched upon a brick base to afford a clear view over the tracks.

A Board of Trade collision report, dated 6th December 1910, notes the following:

Between London Bridge and Cannon Street there are four lines of way - two (on the south) for up traffic, and two for down. Towards Charing Cross, there is one up and one down line only.

Maps dated 1896 show three tracks in evidence, suggesting the laying of an additional set of rails took place during the intervening years (some sources suggest 1901).

In the face of London tramway competition, the LSWR and LB&SCR started electrifying their suburban lines and whilst the South Eastern & Chatham Railway (SE&CR) had proposals to follow suit, the company lacked the finance. Thus, this was left to the SE&CR’s successor, the Southern Railway, to enact. The first route on the ex-SE&CR network equipped with 660 volts DC third rail was that from Victoria and Holborn Viaduct to Orpington via Herne Hill and Bickley Junction, in 1925. Suburban lines serving the ex-SER termini of Charing Cross and Cannon Street were electrified in the following year. Public electric trains commenced from Charing Cross and Cannon Street to Orpington and the Hayes and Addiscombe branches on 28th February 1926. The North Kent routes followed on 6th June.

As part of the electrification scheme, the London Bridge area was re-signalled. Four aspect colour lighting was brought into use from Charing Cross and Cannon Street to Borough Market Junction on Sunday 27th June 1926. Signalling equipment for the scheme was provided by the "Westinghouse Brake & Saxby Signal Company". In 1928, an electro-mechanical locking frame of miniature power levers, accompanied by an illuminated diagram, was installed in the ex-SER signal box at Borough Market Junction, which at the busiest times required two signalmen to operate. The changeover was reported in The Railway Engineer, Volume 51, 1930:

The next change was made on June 17, 1928, and forms the subject of the present article. It resulted in the concentration in a new power frame of 35 levers in the existing box at Borough Market Junction.

Borough Market Junction’s power frame of 1928 remained in use for nearly five decades. The signal box's demise came as part of the project to rebuild London Bridge station, which commenced in 1972. This involved reconstruction of the platforms and a completely revised track layout, controlled by a huge signalling centre located on the southern side of the viaduct, overlooking the throat of the Central Division terminus platforms. Known formally as the "London Bridge Signalling Panel", it controlled an area from Charing Cross and Cannon Street termini in the west, to as far as Hayes, Bromley North, Elmstead Woods, New Eltham, Eltham, and Woolwich in the east. On the Central Division, the new installation covered lines from London Bridge to as far as Clapham, East Dulwich, and Anerley, it formally taking control of these routes on 20th July 1975. The Charing Cross and Cannon Street spurs were absorbed into the panel's control on 17th April 1976 (notably, Cannon Street was closed from 15th to 20th April for track alterations), which resulted in the abolition of signal boxes at Charing Cross, Metropolitan Junction, Cannon Street, Borough Market Junction, and London Bridge.

The London Bridge rebuilding works reduced the complexity of movements at Borough Market Junction by shifting the segregation of traffic bound for Charing Cross and Cannon Street lines to St Johns. At the latter, on 29th March 1976, a flyover and 1 in 45-graded single-track were commissioned as part of the track re-arrangements. In a Department for Transport report dated 12th July 1978, documenting a derailment at Borough Market Junction that occurred on 6th May 1977, the following was noted:

The main separation of trains for the two termini is now achieved at St. Johns where a new flyover has been constructed but, in order to retain flexibility, an emergency crossover has been retained between the Up Charing Cross line and the Up Fast Cannon Street line commencing at facing Points No. 715.

Borough Market Junction's timber cabin was rescued for preservation by the National Railway Museum, York. The large brick base was partially demolished, but around 50% of it is still evident at the signal box's former site. The location ceased to be a junction when the crossover between Charing Cross and Cannon Street lines was moved east of London Bridge station in 1991. 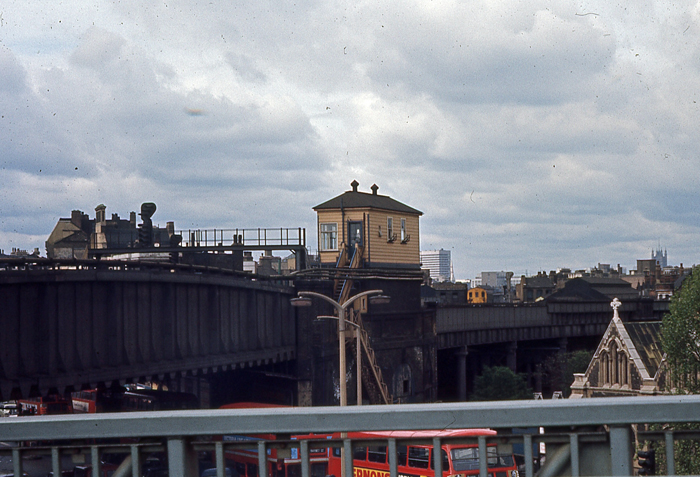 Looking in the Charing Cross direction, at the rear of Borough Market Junction signal box, it is evident that the cabin could be reached from street level via a long timber staircase. A Bulleid-designed EPB can be seen on the Charing Cross lines, whilst to the right of the train is the roof of the junction's namesake. Immediately beyond the signal box, the bridge span curving to the right carries the tracks to Cannon Street. © David Glasspool Collection 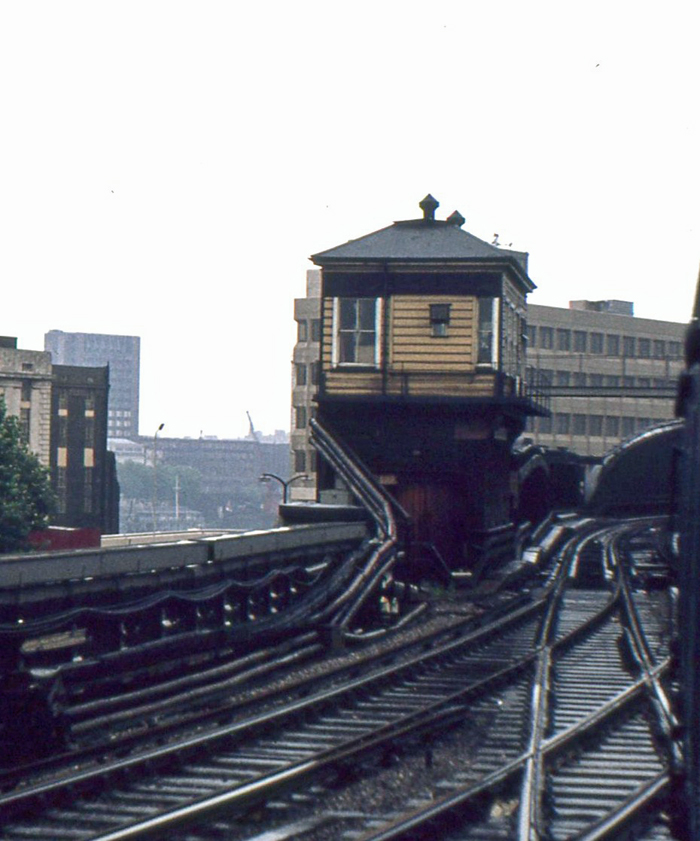 A view towards London Bridge shows Borough Market Junction signal box around the time of closure. Such was the complexity of movements through the junction and the tightness of the curves, that a 20 MPH speed limit was imposed at all times. The tracks curving to the left are those to Cannon Street. © Roger Goodrum