This became the first and, arguably, most successful all-Pullman service on the Western Section main line from Waterloo. Perhaps not quite reaching the same legendary status as the ‘’Golden Arrow’’ from Victoria, the ‘’Bournemouth Belle’’ nevertheless had a long and distinguished career. The story begins at the end of the 1930 summer season, when the Great Western Railway put its only seven Pullman vehicles into store at Old Oak Common. The company had ordered these carriages in 1928, and construction was subcontracted to Metropolitan Cammell, which delivered them in time for the 1929 summer timetable. The vehicles initially ran as standalone Pullmans within Ocean Liner Express trains of standard GWR stock, between Paddington and Millbay Docks, Plymouth. Then, on 8th July 1929, the ‘’Torquay Pullman Limited’’ was initiated. This was an all-Pullman service running two days a week between Paddington and Paignton, calling en-route at Newton Abbot and Torquay only. So low was the patronage of this service that it ended permanently in September 1930, and as earlier mentioned, the Pullmans were secreted in the depot at Old Oak Common. Initially, they were to be reused by the GWR the following season, but as it eventually transpired, the company decided it was best to rid itself of these carriages. On 1st January 1931, the seven Pullman cars made the short journey round the West London Line from Old Oak Common to the SR’s carriage sidings at Clapham Junction.

The SR already had Pullman vehicles operating out of its terminus at Waterloo, but as per the initial use of the 1928 carriages by the GWR, these were marshalled into trains of standard carriage stock. However, this situation was soon to change, and in a move which mirrored that of the GWR, the decision was taken to commence an all-Pullman service during the summer 1931 timetable. The arrival of the GWR carriages freed up a number of existing SR Pullmans, which could be pooled to form the new train. The ‘’Bournemouth Belle’’ was scheduled to run seven days a week throughout the summer, and motive power provided in the form of a ‘’Lord Nelson’’ engine.

The inaugural ‘’down’’ train was scheduled to depart Waterloo at 10:30 AM, run non-stop to Southampton West, arriving there at 11:59 AM, and reach Bournemouth Central at 12:39 PM. Finally, a departure from the latter was then made for Bournemouth West, the train terminating here at 12:52 PM. The first train ran on Sunday 5th July 1931, ‘’King Arthur’’ Class No. E780 ‘’Sir Persant’’ deputising for the intended ‘’Lord Nelson’’ engine. Whilst the Sunday service ran only as far as Bournemouth, the range of destinations increased for weekday running. During the train’s first season, weekday stops beyond Bournemouth included Poole, Wareham, Dorchester, and Weymouth. At Wareham, a connection was made with the branch line service to Swanage. The journey time between Bournemouth and Weymouth was 1 hour 4 minutes, the entire end-to-end trip taking 3 hours 13 minutes. The train typically comprised ten Pullman vehicles and on arrival at Bournemouth Central, the formation would be split in half: the first five carriages would continue onto Weymouth, whilst the latter portion would make the short trip down to Bournemouth West. The return weekday working of the train made for a 4:00 PM departure from Weymouth, to arrive at Bournemouth Central in 1 hour 4 minutes, again calling at Dorchester, Wareham, and Poole en route. Here, the five-coach train would be re-coupled to the portion from Bournemouth West, the latter of which had departed at 4:50 PM. Departure from Central station was scheduled for 5:10 PM, for arrival at Southampton West at 5:45 PM and, finally, at Waterloo at 7:18 PM. The composition of the inaugural train was as follows:

Car Nos. 81, 82, 83, and 84 were new builds, completed by the ‘’Birmingham Railway Carriage & Wagon Company’’ shortly before the service commenced. Car Nos. 83 and 84 had a short-lived career on the SR, and these carriages soon escaped to the LNER.

The Sunday ‘’Bournemouth Belle’’, which went no further than its namesake, had sufficient passenger loadings from the outset for the SR to continue the service into the 1931/1932 winter timetable. Sadly, patronage on the weekday service beyond Bournemouth was considered low, and after the end of the 1931 summer timetable, never again did this Pullman go to Weymouth. In the following year, the weekday ‘’Bournemouth Belle’’ recommenced during the summer season, terminating at Bournemouth West. This service enjoyed loadings similar to its Sunday counterpart and from 1st January 1936, the ‘’Bournemouth Belle’’ became a daily service throughout the year. In the peak, the train comprised a maximum of twelve carriages, whilst decreasing to a minimum of eight vehicles in the low season, and the train weight was not to exceed 400 tons. The Pullman stock for this service was berthed at Stewarts Lane on the Eastern Section, where a food depot belonging to the Pullman Car Company was used for supplies. The daily train ran behind ‘’King Arthur’’ and ‘’Lord Nelson’’ engines until 3rd September 1939, when war was declared and the SR’s Pullman services on all lines suspended.

On 7th October 1946 the ‘’Bournemouth Belle’’ recommenced, and ten Pullman vehicles, only one of which had featured in the inaugural train of 1931, appeared:

For the service, ‘’Lord Nelson’’ and ‘’King Arthur’’ engines had given way to more powerful motive power in the from of the Bulleid Pacifics. Merchant Navy Class No. 21C18 ‘’British India Line’’ was at the helm of the first post-war service, departing Waterloo at 12:30 PM and arriving at Bournemouth Central in 2 hours 5 minutes. The return working from Bournemouth Central to Waterloo was scheduled to be five minutes quicker than the outward trip, leaving the former at 7.25 PM and arriving at the latter at 9:25 PM. This initial ‘’flirt’’ with the new Pacific engines was interrupted by the advent of a trio of then new 1CO-CO1 diesel-electric locomotives. Also Bulleid products, Nos. 10201 to 10203 were completed jointly by Ashford and Brighton works between 1949 and 1954. These prototypes, alongside similar machines produced by Ivatt for the London Midland Region (Nos. 10000 and 10001), were frequently on the roster for the ‘’Bournemouth Belle’’ and non-Pullman ‘’Atlantic Coast Express’’ workings. By July 1955, all these diesels had left for a new permanent home on the Midland Region, and the ‘’Bournemouth Belle’’ once again became an all-steam affair behind Bulleid Pacific engines.

In February 1960, stabling of Pullman stock for both the ‘’Bournemouth Belle’’ and ‘’Golden Arrow’’ services moved from Stewarts Lane to Clapham Junction Carriage Sidings. New arrangements were made at Waterloo to supply the Bournemouth train with food.

In September 1964, the Minster of Transport authorised the electrification of the Western Section main line between Brookwood and Branksome, the latter just to the west of Bournemouth. At Branksome existed a triangular junction between the main line and the Bournemouth West spur. The triangle was formed to its north by Gas Works Junction, to its west by Branksome Junction, and to its east by Bournemouth West Junction. To permit advanced electrification works to take place, the triangular junction was temporarily taken out of use on 2nd August 1965, and ‘’Bournemouth Belle’’ passengers were conveyed between Central and West stations by a replacement bus service. A new inspection shed was erected alongside the Bournemouth West approaches and during the works, it was decided not to re-open the spur to passenger traffic. Thus, Bournemouth West formally closed on 4th October 1965, Gas Works and Bournemouth West Junctions being eliminated and the Pullman service being permanently cut back to Central station. The summer timetable of the following year saw diesel traction replace steam engines on Sunday ‘’Bournemouth Belle’’ workings. Indeed, the SR’s native D6500 series diesels (later Class 33 under TOPS) were drafted in, but to keep time, double-heading was required. Then, in January 1967, steam haulage of the luxurious service was nearly eliminated: Brush Type 4 Diesels (Class 47 under TOPS) were diagrammed for the working. This was a diesel breed which was not numerous on SR metals, and in the type’s formative years, reliability was poor. Thus, Bulleid Pacifics frequently stood in for the booked diesel.

Sunday, 9th July 1967 was booked to be the final day of both steam traction and the ‘’Bournemouth Belle’’ on the Western Section main line. In advance, British Railways’ Southern Region had announced that the last day of this long-standing Pullman train would feature steam haulage. At the eleventh hour, higher management thwarted this proposal, and the final ‘’Bournemouth Belle’’ services were hauled by Brush Type 4 No. D1924 (later Class 47 No. 47247). This left a somewhat bitter taste in the mouths of enthusiasts, and marked a sad end for this famous Pullman service. The last ‘’Bournemouth Belle’’ formation of 9th July comprised the following vehicles:

Pullman services returned to British Rail in quite large numbers, particularly on SR metals, as a result of the VSOE British Pullman operation. This was formally launched at London Victoria on 11th November 1981, and the inaugural run of the service was on 28th April of the following year. VSOE was a private venture wholly owned by the ‘’Sea Containers Group’’, and involved the restoration of vintage Pullman vehicles for use again on BR metals. Various all-Pullman excursions were run, and a notable series of workings took place during 1986. On summer Saturdays in that year, the ‘’Bournemouth Belle’’ recommenced from Waterloo, making use of authentic Pullman vehicles, albeit hauled by diesel traction in the form of a Class 33.

From the outset in 1931, the departure from Waterloo was at 10:30 AM, for weekday and Sunday services. When the train resumed after World War II in 1946, the departure time had been put back to 12:30 PM. Southampton Central was reached at 1:57 PM, and after a two minute stop there, the train carried on to Bournemouth Central, where it stopped at 2:35 PM. The service finally reached Bournemouth West at 2:46 PM, again including a two minute stop at the Central station. From 1948 onwards, the train was slowed by five minutes, thus it now arrived at Bournemouth Central at 2:40 PM.

As part of British Railways’ 1963 summer timetable, the ‘’down’’ working was in fact accelerated by ten minutes, providing a two-hour schedule for the all-Pullman service between Waterloo and Bournemouth. This change was made in conjunction with the slowing of non-Pullman services between London and Bournemouth, namely the 6:30 PM ‘’down’’ departure, where seven minutes were added to the original two-hour schedule to accommodate an extra stop at Winchester. In addition, the 2:30 PM departure from Waterloo to Bournemouth, again running to a two-hour schedule, was slowed significantly by 34 minutes. It effectively became a semi-fast service, now calling at Winchester, Brockenhurst, New Milton, Christchurch, and Pokesdown. Indeed, the two-hour schedule of the Pullman working was again lost after the summer of 1965, when advanced electrification works required the universal deceleration of services.

After World War II, the winter ‘’up’’ train, weekday and Sunday, departed Bournemouth West at 7:14 PM and arrived at the Central station at 7:23 PM. The train left the latter at 7:25 PM and maintained a two-hour run to Waterloo (including the stop at Southampton Central), arriving there at 9:25 PM. From summer 1947, the train was retimed for a much earlier departure from Bournemouth West, leaving there at 4:34 PM, arriving at Central station at 4:43 PM, and subsequently departing the latter two minutes later for a two-hour run to Waterloo, arriving at 6:45 PM. Deceleration of the ‘’up’’ train occurred as part of the summer 1948 timetable, adding six minutes to the journey time between Central station and Waterloo. As mentioned earlier, a two-hour schedule was reinstated as part of the summer 1963 timetable, for both ‘’up’’ and ‘’down’’ portions of the train.

With BR's Early ''Cycling Lion'' Crest on the tender, Rebuilt Merchant Navy Class No. 35022 ''Holland America Line'' makes a splendid sight at the head of the ''Bournemouth Belle'', as it awaits departure from Waterloo. Immediately behind the locomotive is one of the 1951-completed Pullman cars, identified by its square lavatory window. © David Glasspool Collection 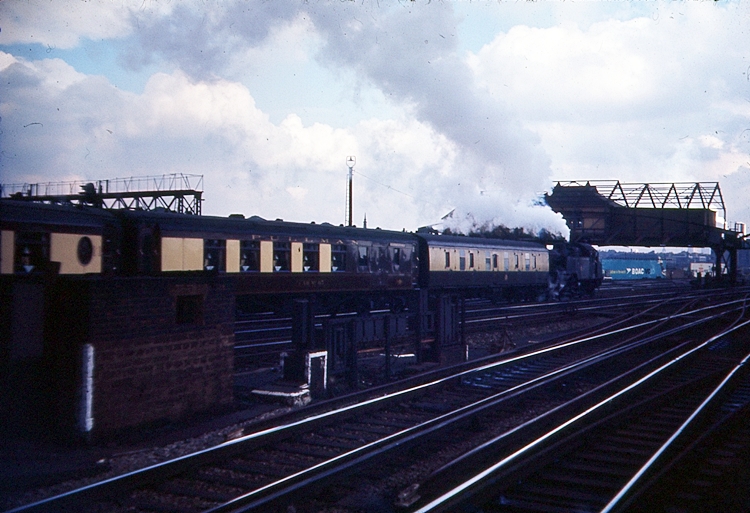 Nine Elms-allocated BR Standard Class 3 2-6-2T No. 82006 is seen hauling the stock of the ''Bournemouth Belle'' out of Clapham Junction sidings, heading to Waterloo. No. 82006 was withdrawn from service in September 1966. © David Glasspool Collection 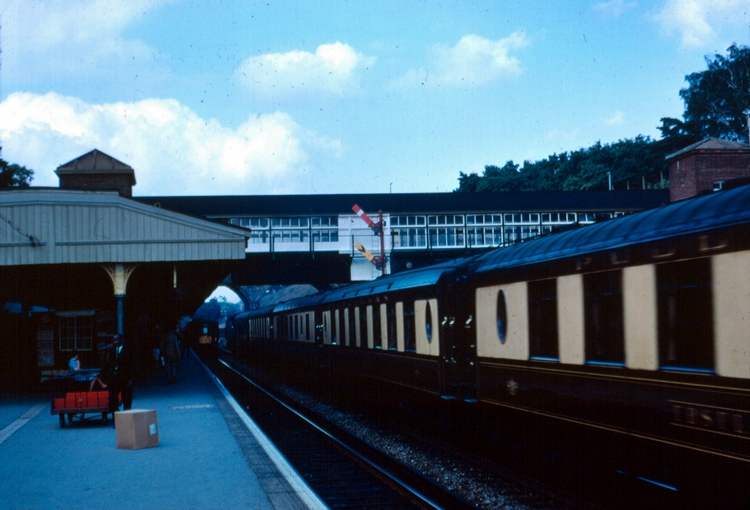 
Return to the Kent Rail Homepage or alternatively, check for Updates.