This was one of a series of substantial paper mills situated in North West Kent, bordering the edge of the Thames. Despite closing in 1973, and most of the buildings having long since been razed to the ground, there still remains a series of standard gauge railway tracks on this part of the Northfleet Embankment. As is so often the case, redundant railway lines at such sites far outlive the former industries which they once served; the fact that the rails are sunk into concrete makes it easier to leave them in situ, rather than dig up. However, given that this part of Northfleet is earmarked to be redeveloped in connection with the "Ebbsfleet Garden City" scheme, which aims to produce thousands of homes, not to mention the emergence of new industrial sites, remains could well disappear forever.

Perhaps the best known of Bowater's Paper Mills, at least from a railway perspective, were those in Sittingbourne and Kemsley. These possessed an extensive 2-foot 6-inch narrow gauge railway network, which linked them to Ridham Dock, the latter situated on the southern bank of The Swale. This operation, however, was not originally set-up by the Bowater Corporation; the company had come into ownership of the mills in 1936, after purchasing them from Edward Lloyd in a bid to boost newsprint output.

Bowater's first venture into newsprint manufacture began on the Thames embankment at Northfleet. By the turn of the 20th Century, the company was operating as a newsprint wholesaler based in the City of London under the auspices of "W. V. Bowater & Sons". A pre-war boom in newspaper circulation saw the company purchase, in May 1914, the site of a redundant dockyard, where it proposed establishing its first paper mill for the production of newsprint. The site was previously known as "Northfleet Dockyard", this having originally been commissioned in 1788 by one Thomas Pitcher.

Northfleet Dockyard covered an area of 18 acres and ran along the southern edge of the Thames for 960-feet. The first ship launched from here on 2nd November 1789 and the site grew to incorporate seven shipbuilding slips and a dry dock. The dockyard constructed numerous ships for the British Government during the Crimean War, in addition to sailing and steam vessels for overseas administrations and merchant navy shipping lines. The original proprietor, Thomas Pitcher, died in 1837 and one of his sons, William, took over the running of the business. He subsequently died in 1860, beyond which the dockyard ceased to operate. Part of the site was for a short time occupied by an engineering firm and bicycle manufacturer afterwards, but the shell of the dockyard, complete with building slips, was still in existence at the time of Bowater's purchase in 1914.

The outbreak of war in July 1914 stalled Bowater's plans for a mill at Northfleet and construction work did not commence until 1924. As part of the scheme, a new company by the name of "Bowater's Paper Mills Limited" was formed in the previous year. At last, the relics of the long-defunct dockyard were swept away and in its place grew a colossal operation, construction having been subcontracted to Sir W. G. Armstrong, Whitworth & Co Ltd. "Thames Mills", as the site became known, started producing newsprint in 1926, being equipped with two papermaking machines. At this time, the company was chaired by Sir Eric Bowater, the grandson of the founder, who also oversaw the opening of paper mills in Ellesmere Port, Cheshire in 1930, for which half of the capital was supplied by Lord Beaverbrook. This was followed in 1938 by Bowater's purchase of the "International Power and Paper Company of Newfoundland", Canada, which was subsequently renamed "Bowaters Newfoundland Paper Mills Ltd.".

Of particular interest to this section is, of course, the extensive railway system commissioned at Thames Mills, Northfleet, the complexity of which can be appreciated in the provided diagram. This system was linked to the Southern Railway's branch line to Gravesend West Street by a ¾-mile-long single track, a junction being formed at Rosherville Sidings. The connection with Thames Mills reused a tunnel through the chalk ridge underneath London Road, originally bored for the railway network of the defunct Red Lion Cement Works. In addition to Thames Mills, the single track also linked the Gravesend West Street branch with the London Portland Cement Works. The latter had been commissioned in 1868 under the name "Messrs. J. C. Gostling & Co", becoming the "London Portland Cement Company" in 1876 after a takeover. The works were situated on a large site just west of Thames Mills, the two being separated by allotment gardens.

As was seemingly standard in the paper manufacturing industry, Thames Mills' railway network was operated under the "fireless" locomotive principle. Traditional steam locomotives, which burnt coal (and, in some cases, wood or oil) to boil water, posed the risk of hot ash setting light to the finished product. Additionally, they also generated considerable exhaust emissions, which were problematic for industrial sites with poor ventilation, and their boilers risked exploding if the water level dropped below the minimum required level. Conversely, fireless locomotives were equipped with a cylindrical reservoir, into which pressurised steam could be pumped from a static boiler, and these were risk-free from explosion. Fireless locomotives still possessed pistons and connecting rods, as per standard engines, but produced no harmful emissions and, per unit, had lower purchase and maintenance costs. 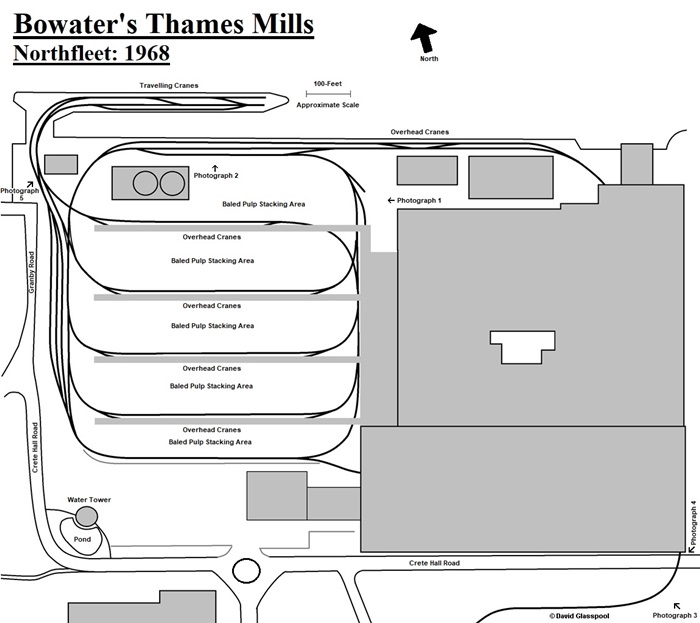 Photographs in this section are numbered, so their locations can be identified in relation to the track plan above. The general track layout seen here, including the jetty at the northern end of the site, date from the early 1950s. Click the above for a larger version. © David Glasspool 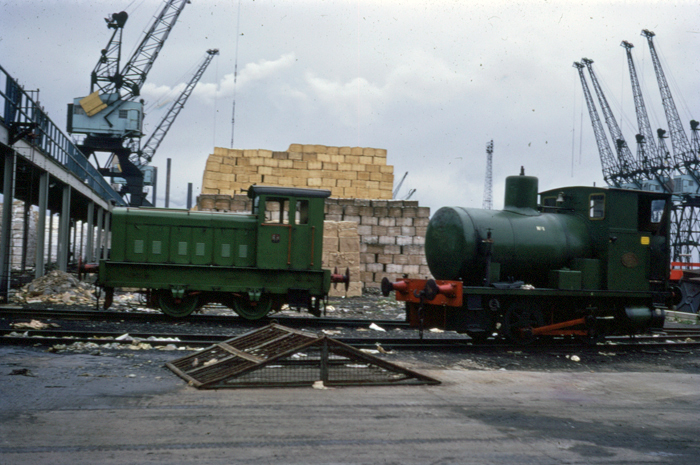 Photograph 1: Diesel and steam power. On the right is the mills' first ever steam locomotive, fireless 0-4-0 No. 1876 of "Andrew Barclay Sons & Co", which had been at the site since 1925. To the left is the Ruston & Hornsby Class 88DS four-wheel diesel mechanical shunter which arrived in 1957. Today, No. 1876 is in the care of the "Sittingbourne & Kemsley Light Railway", whilst the diesel is now far away in Oswestry on the Cambrian Railway, Shropshire. In the background can be seen stacks of baled pulp, whilst on both flanks are travelling cranes. © David Glasspool Collection 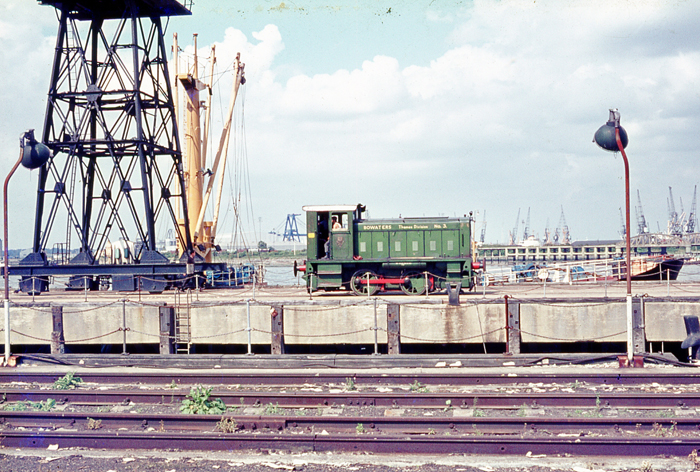 Photograph 2: The second diesel shunter of 1957 which worked at the site, Class 165DE of Ruston & Hornsby (works No. 416209), is seen upon the concrete jetty in the Thames. It was here where bale was unloaded from docked ships and packed into railway wagons, for conveyance to the mills. On the left is the huge base of one of the travelling cranes, whilst in the distance, across the water, is Tilbury Docks. © David Glasspool Collection