Brasted was the epitome of a quiet, unassuming station, deep in rural territory, having come into use with the 4¾-mile long Westerham branch line on 7th July 1881. The route had originally received Parliamentary approval on 24th July 1876, and was built under the auspices of the nominally independent ‘’Westerham Valley Company’’ (WVC). Leaving the Tonbridge Cut-Off Line at Dunton Green, the branch was single-track from the outset, comprising just two stations: Westerham and Brasted. The SER’s influence during the construction programme was obvious, for the buildings erected at these sites conformed to the company’s prevalent ‘’economical’’ policy, which endeavoured to produce new station structures at a ‘’modest’’ cost.

The layout at Brasted was simple: a single-track was served by one platform surface, the latter of which was positioned south of the line. No passing loop was provided here, and the very fact that the line was single-track in nature meant that a token system was employed. To proceed along the branch, the driver had to be in possession of a token, supplied by the signal cabin at Dunton Green. Under the SE&CR, an aerial ropeway across the main line tracks at the latter was installed, to allow conveyance of the token from the ‘’down’’ side signal box to the branch platform, this of which was located on the ‘’up’’ side. Reversals of services, and locomotive run-a-rounds, took place at Westerham, which resided a mere 1½-miles to the west of Brasted. The station building at Brasted was virtually identical to that erected at Westerham, albeit with a slightly reduced width: 70-foot in length, it was a single-storey affair fabricated from tongue-and-grove timber, built upon a wooden frame, complete with a slated pitched roof. The building was erected upon a shallow brick base, and a pair of chimneystacks emerged through the roof. A platform canopy ran the length of the structure, supported by seven stanchions, and was built to the same basic design as that at Westerham – the example at Brasted, however, demonstrated a marginally wider spiked valance. Furthermore, Brasted’s porch canopy, attached to the building’s southern elevation, demonstrated a sloping roof (as per those examples still in existence at East Farleigh), whilst its counterpart at Westerham was flat-roofed. The platform surface was illuminated by Victorian diamond-shaped gas lamps, and the Station Master was accommodated in a spacious two-storey house, 40 yards south of the station building. The house was completed two years after the line opened, at a cost of £560 (£40,420 at 2007 prices).

The goods yard here was surprisingly spacious, given the site’s close proximity to the end of the line. Three eastward-facing sidings fed off a single connection with the running line, east of the station. One of these sidings terminated behind the eastern end of the platform surface, alongside a row of coal staithes; the remaining two trailed off at about 25 degrees to the branch line, and one terminated alongside an elevated loading platform. No signal box was ever erected at the site, and sidings here were operated by manual ground levers.

Around the turn of the century, the platform surface was heightened with additional layers of brick, but little else changed at this rural outpost until the advent of the Southern Railway. In about 1935, this company’s distinctive swan neck gas lamps, complete with ‘’Target’’ name signs, replaced the earlier diamond-shaped lamp variant. Concurrent with this, metal fencing was installed along the rear edge of the platform surface, replacing the existing timber fabrication. The goods yard became host to an ex-LB&SCR wooden van body at this time, which was used as a store.

Like so many stations, decline at the site began under British Railways ownership. In 1955, service rationalisation occurred, which saw a drastic reduction of those branch line trains running outside of the peak hours. As a result of this, staffing at Brasted ceased, but the station layout remained unchanged. Reportedly operating at an annual loss of £26,000 a year (approximately £430,232 at 2007 prices), the Westerham branch’s days were numbered. The case for closure was compounded by proposals for a London Orbital Motorway, which required portions of the track bed site. In spite of opposition, the final passenger services along the line ran on 28th October 1961. All was not lost, however, and during 1962, Brasted station was taken out on lease by the ''Westerham Valley Railway Association'' (WVRA). The group had been formed in March of that year with the aim of purchasing the Westerham line, including infrastructure, in the hope of running its own private railway services. As detailed in the Westerham section, spiralling financial costs saw the whole effort fall on stony ground, and demolitions at the terminus commenced in 1966. The station building and platform at Brasted remained in existence, albeit derelict, until 1978, demolition finally occurring as construction of the London Orbital (M25) reached an advanced stage. A notable survivor of the motorway works was the Station Master’s house, which now serves as a private residence. The Brasted station site remains undeveloped, and the outline of the goods yard can still, today, be traced out. 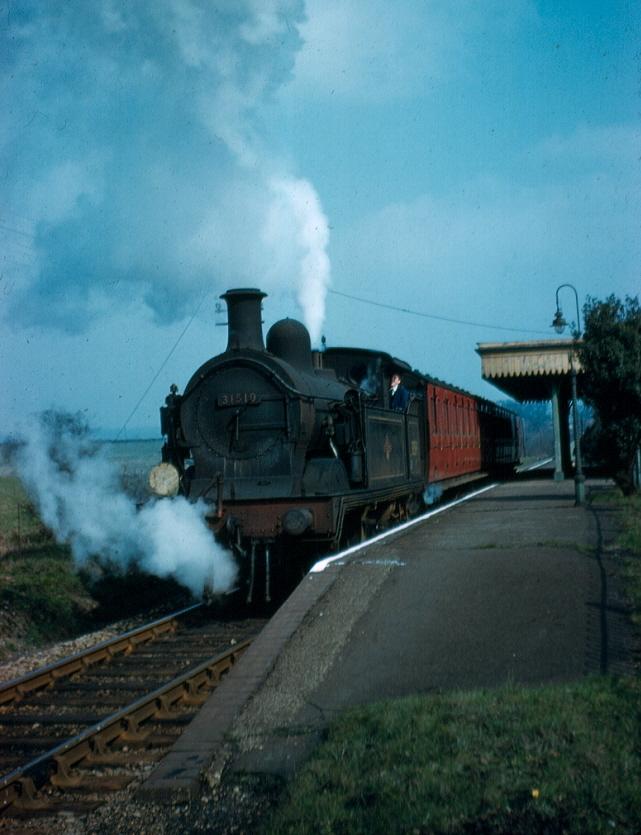 This delightful portrait depicts ex-SE&CR ''H'' Class 0-4-4 No. 31519 departing Brasted for Westerham, with push-pull stock in tow. This view clearly shows the single-track and the sole platform surface. Also in evidence is the spiked canopy valance and one of two swan neck gas lamps installed by the SR. © David Glasspool Collection 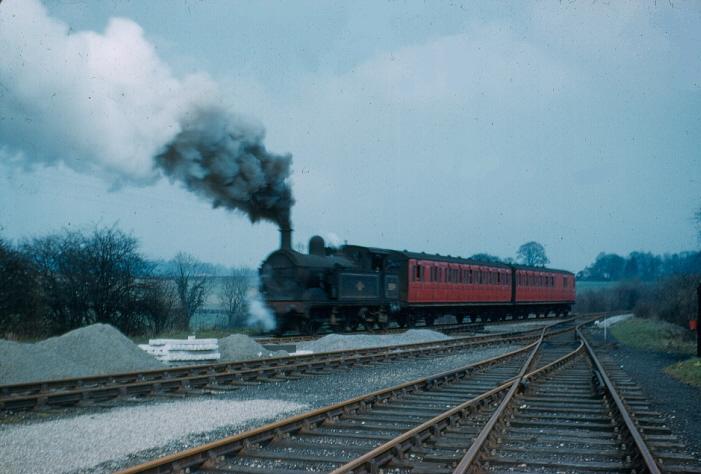 We see No. 31519 again, but this time on the return working to Dunton Green. The locomotive, which was withdrawn in February 1961, is seen propelling its stock away from Brasted. Fanning out in the foreground are the three sidings of the goods yard - of note is the white-painted manual lever, alongside the nearest set of points. © David Glasspool Collection 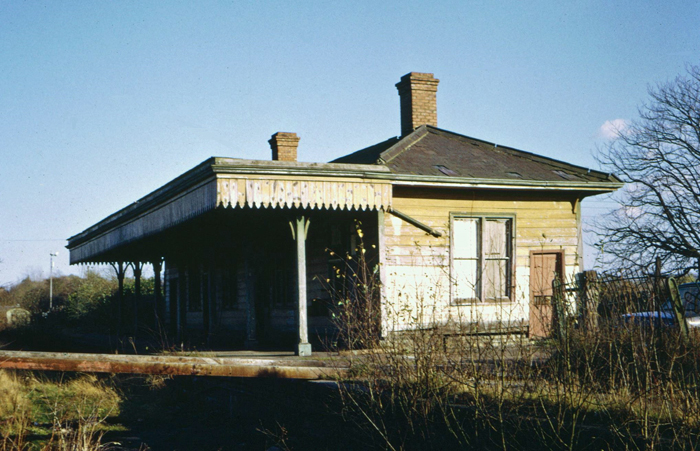 Seen eleven years after closure, the track has gone, but the main building looks remarkably complete, right down to its spiked canopy valance. Of tongue-and-groove timber construction with a hipped slated roof, the structure finally succumbed in 1978. © Tom Burnham