At first look, it may seem strange to include this station within the main index, for it is neither in the County of Kent, nor on that area formerly considered the South Eastern Division. Indeed, Brockley can be found on the London Bridge branch of the Brighton Main Line, deep within Greater London, firmly on the network which once made up British Rail's Central Division. However, when the station here was opened in 1871, Brockley was still part of Kent, not being absorbed into the County of London until 1889.

Briefly recapping, the origins of the line through this South London suburb lie with the ''London & Croydon Railway'' (L&CR), which was formed on 12th June 1835 by an Act of Parliament. This company built a nine-mile double-track route, which terminated in the south at what is now West Croydon, and in the north joined the existing "London & Greenwich Railway" (L&GR) metals at what became Corbetts Lane Junction. The line cost £615,160 to build and opened to traffic on 1st June 1839, intermediate stations being commissioned at New Cross, Dartmouth Arms (latterly renamed Forest Hill), Sydenham, Penge, Annerley (subsequently "Anerley"), and Jolly Sailor (Norwood Junction). From 12th July 1841, the "London & Brighton Railway" started running over the route, followed by the "South Eastern Railway" on 26th May 1842. The L&BR absorbed the L&CR in 1846, as a result becoming the "London, Brighton & South Coast Railway" (LB&SCR) on 27th July of that year.

Previously, in October 1844, work had started on laying a third set of rails on the original L&CR route between Croydon and Forest Hill. These were dedicated to atmospheric-powered trains, trials of which commenced on 22nd August 1845, the first public services running on 19th January 1846. Reportedly, it was cheaper to lay a single atmospheric line than a double-track locomotive line, and the former was extended through to New Cross, officially being opened to public traffic on 14th January 1847. On 4th May of that year, under the management of the LB&SCR, the atmospheric scheme was officially abandoned.

The line between Bricklayers Arms Junction and Norwood Junction was quadrupled with standard locomotive tracks over the 1853 to 1854 period, to accommodate the increasing traffic generated by the LB&SCR and SER main lines which fed it. From 1st May 1868, this entry to London ceased to be a main line for the SER, which diverted its Kent Coast traffic to the Tonbridge Cut-Off via Sevenoaks. The expansion of suburban London continued apace, much of this taking place around the London Bridge approaches and the SER's exit to the North Kent Line. As for that southwards, house building had reached Brockley by 1870, this being a spillover from those developments of New Cross which encroached from the northeast. This culminated in the opening of Brockley station on 6th March 1871, 3¾-miles from London Bridge.

The station which emerged was a spacious two-platform affair, located in a wide clay cutting through which the quadruple line passed. The tracks were paired by direction, the platforms serving the outer "slow" lines. On the "up" platform was erected a two-storey-high house for the Station Master; this was of yellow brick construction with slated pitched roof sections, and similar examples once existed at Penge (West) and Anerley. Just to the north of this was a single-storey tongue-and-groove timber building, about 50-feet in length, which featured a hipped slated roof. Linking both of these structures was a splendid downward-sloping canopy, 165-feet-long, supported upon cast-iron stanchions and sporting a timber valance. The "down" side also featured a single-storey wooden building with a hipped slated roof, this of which had a canopy of 75-foot-length. Passengers crossed the tracks by means of an 80-foot-long lattice footbridge, positioned immediately north of the canopies.

No goods facilities were ever established at Brockley, no doubt the yard at New Cross, barely ¾-mile to the north, being the railhead for the area. However, a signal box was present at the site, being set into the cutting behind the southern end of the "down" platform. This comprised a brick-built base and timber upper half, topped off with a hipped slated roof sporting a decorative valance, and maps suggest this predated the station. Indeed, it was built to the LB&SCR's own in-house design, an identical example emerging at Honor Oak Park, and the two are likely to have been products of the LB&SCR's nearby Cold Blow Signal Works at New Cross.

In June 1872, a second station was provided in the locality, going by the name "Brockley Lane". This was no more than 80-yards northeast of the "down" side entrance of the LB&SCR's station and had been opened by the London, Chatham & Dover Railway (LC&DR) on its Greenwich Park branch. This double-track line had come into use for public traffic on 18th September 1871, leaving the 1865-opened Crystal Palace (High Level) branch at Nunhead, and terminated at Blackheath Hill. Trains did not reach a Greenwich Park terminus, ½ further on, until 1888. The branch crossed the four-track Brighton Main Line on a bridge at the northern end of the LB&SCR's Brockley station and the opening of a set of platforms by the LC&DR was no doubt an attempt to take local traffic away from the London Bridge line. Brockley Lane was 6 ¾ route miles from Victoria, in the West End, and about 6 ⅓ route miles from Ludgate Hill, in the City. Indeed, as mentioned previously, the Brockley station of the LB&SCR was just 3¾-miles from London Bridge, although this neither brought passengers into the West End nor the City, a transfer onto SER services being required for termini at Charing Cross and Cannon Street.

By the Great War period, a public footbridge had been built across the four lines at Brockley, sandwiched in-between the main station structures and the existing passenger footbridge. As part of the works, the "up" side staircase of the passenger footbridge was reversed, so it now descended in a northerly direction; that on the "down" side retained its original southward-facing position.

The line from London Bridge through to Coulsdon North saw its first public electric services on Sunday 17th June 1928, the Southern Railway having adopted the ex-LSWR's 660 Volts DC third rail system. Previously, the LB&SCR had started electrifying its suburban lines by using an overhead wire system rated at 6,700 volts AC. The South London Line between London Bridge and Victoria was so converted in 1909, followed by Victoria to Crystal Palace (Low Level), Norwood Junction, and Selhurst via Streatham Hill, in 1911. The last section to be commissioned for wires was that between Peckham Rye and West Norwood, in 1912. In 1926, the SR confirmed abandonment of overhead electrification; the routes affected thus far were converted to third rail operation, and the latter system was taken forward on subsequent electrification schemes by the company.

Under British Rail auspices, a number of the original stations on the main line between London Bridge and East Croydon suffered particularly badly, downgrading very much being the order of the day. The worst hit were Brockley and Forest Hill which, in the early 1970s, were razed to the ground, dreary prefabricated CLASP structures coming into use as booking offices. That at Brockley was erected on the "down" platform, being a two-storey-high structure which hugged one corner of the footbridge, a similar arrangement to that which came into use at Charlton around the same time.

Sadly, Brockley is today deprived of nearly all the architectural interest for the railway historian. Indeed, the brickwork of the platforms and the main span of the lattice footbridge are the only steam-era station relics to be left at the site, although are little consolation for what has been lost. True, there remain a couple of elderly bridge spans immediately to the north, carrying the Nunhead line and Endwell Road, but this station is a sorry state of affairs when viewed in light of its previous guise.

The station entered a new era in 2009 when, on 20th September of that year, it was leased from Network Rail by Transport for London, along with sites at New Cross Gate, Honor Oak Park, Forest Hill, Sydenham Hill, Crystal Palace, Penge West, Anerley, Norwood Junction, and West Croydon. This was in connection with the opening of a rebuilt East London Line and the start of the "London Overground" network, which saw the introduction of direct trains between Dalston Junction and West Croydon. The East London Line reopened with a limited service between Dalston Junction and New Cross Gate on Tuesday 27th April 2010; this was extended through to West Croydon on Sunday 23rd May of that year. As part of these works, step-free access was provided at Brockley by making an inclined approach to the top storey of the CLASP booking office and, on the "up" platform, building a lift shaft which opened out onto the footbridge. A new shelter housing ticket barriers was also erected on the "down" side, at about 45 degrees to the platform, just south of the booking office. 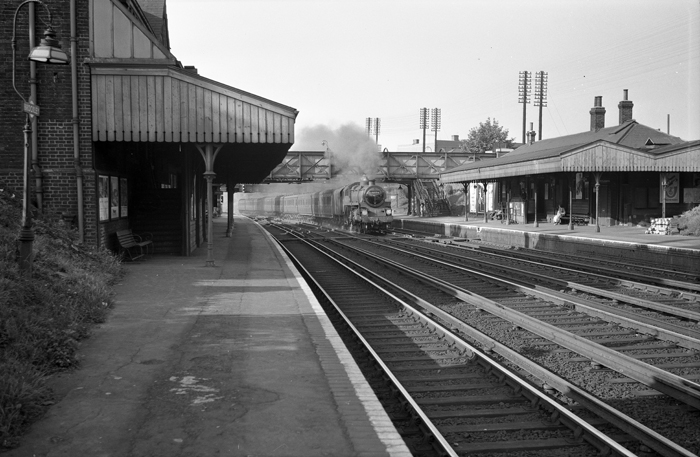 This northward view from the "up" platform shows the generous canopy provision once in evidence at this station. Note in the foreground, on the left, the SR-style Swan Neck lamppost with "Target" name sign, which was replaced by a concrete bracket post with "Sausage" Totem a few years later. The bridge span in view was that carrying a public footpath, whilst the staircase seen below, on the "down" platform, was that of the station's footbridge. At this time, the struts of the latter were still painted in wartime stripes. Underneath the "up" canopy, immediately behind the bench, were stairs which led to the elevated booking hall and entrance on that side of the station. Passing through on the "down" fast is the 5.25 PM London Bridge to Reading service, hauled by Standard Class 4 2-6-0 No. 76056. The journey through to Reading, via Reigate and Guildford, was scheduled to take 2 hours 34 minutes, and carriages were detached at Redhill to be taken onward as part of a service to Tonbridge. © David Glasspool Collection 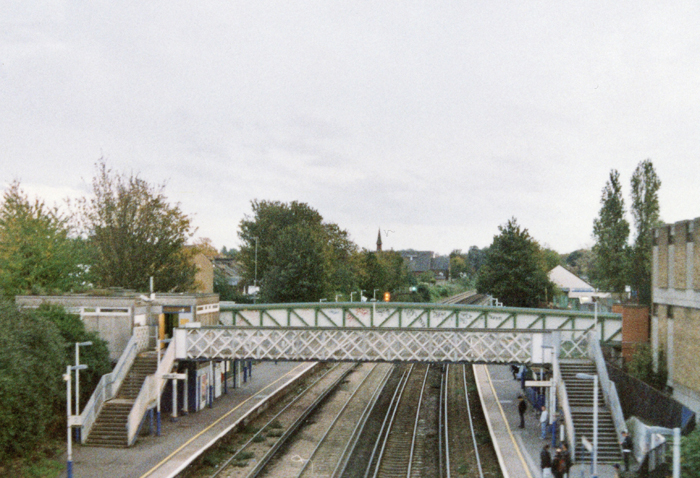 A southward view from the Lewisham to Nunhead line shows the only structure of LB&SCR origin remaining, that of the lattice footbridge. Behind is the public footpath, which had received a new bridge span since the 1955 photograph. On the left is the two-storey-high CLASP station building, dating from the early 1970s. © David Glasspool