Oliver Vaughan Snell Bulleid joined the Southern Railway as Chief Mechanical Engineer (CME) in November 1937, after a move from the LNER. He had originally joined the Great Northern Railway in 1911 as assistant to Nigel Gresley, whom at the same time had just been made CME. The ethos at the SR was very much that of electrification – services had already been electrified on the Brighton Line, and conversion of the SR suburban network to electric working was at an advanced stage. As a consequence, there had been a lapse in the design of modern, powerful steam locomotives for the SR, and on assuming office Bulleid had a race against the clock to make his mark. The first of his designs to emerge was that of the ‘’Merchant Navy’’ Class Pacific, which had been developed in response to an Eastern Section requirement outlining the need to maintain an average speed of 60 MPH, from start to stop, on 600-ton boat trains between Victoria and Dover Marine. The first engine of what eventually became a production run of thirty, was completed at Eastleigh Works on 18th February 1941, formally being named ‘’Channel Packet’’, with ceremony, on 10th of the following month. The then Minister of Transport, Lieutenant-Colonel J.T.C. Moore-Brabazon, conducted the nameplate unveiling, and is quoted as saying that Bulleid ‘’was not only an engineer, but an artist’’. The locomotive became No. 21C1 under Bulleid’s unique numbering system:

The engine was, without doubt, essentially an express passenger type. However, to avoid economical restrictions of World War II stifling his efforts, Bulleid introduced the ‘’Merchant Navy’’ Class under the ‘’mixed traffic’’ heading. This would at least ensure a smooth production run, with minimal intervention. Engines had a tare of 84 tons 14 cwt, and were destined for the trunk routes of the Western and Eastern Sections. For those secondary routes where the locomotives were out of gauge, a lighter, more numerous variant was procured. Dubbed ‘’Lightweights’’, this second breed of Pacific engine was essentially a scaled-down Merchant Navy, demonstrating a reduced tare of 77 tons and having a length of 67-foot 4¾-inches buffer to buffer – this was 2-foot 3-inches shorter than the MN engines. The Eastern Section had again been borne in mind during the design of this second class: it was intended for the engines to be within the highly restricted loading gauge of the Tonbridge to Bopeep Junction (Hastings) route, via Tunbridge Wells Central, in addition to the lines of the SR’s ‘’Withered Arm’’. Eastleigh Works was still in the thick of MN Class construction, therefore assembly of all but six of the Light Pacifics took place at Brighton; tenders were assembled on the Eastern Section at Ashford. The first ‘’Lightweight’’ emerged in May 1945 and became No. 21C101 under Bulleid’s aforementioned numbering scheme. After a trial period of running throughout this month, the engine was formally placed into traffic in June. This was followed on 10th of the following month by an official naming ceremony for the engine at Exeter Central. The locomotive was stabled in platform 1, the eastward-facing bay on the southern side of the station, and the area was packed with spectators. Notable figures present at the naming were Bulleid and Eustace Missenden, the General Manager of the Southern Railway. The engine was Christened ‘’Exeter’’ (hence the location of the ceremony), and unveiled upon No. 21C101’s side was a shield depicting the towers of Rougemont Castle, superimposed on the City of Exeter Coat of Arms. The castle is situated upon the hill immediately east of Exeter Central station.

As per their larger MN sisters, the most striking feature of the Light Pacifics was the air-smoothed casing surrounding the boiler. This not only aimed to provide a modern, revolutionary look for the SR’s new fleet, but also allowed the locomotives to be cleaned automatically in a carriage washing facility, rather than by hand. Much room was also created between the boiler and the outer casing, giving greater flexibility as to where pipes and external boiler fittings could be placed, without worrying about aesthetics. The boiler itself was lagged with copious amounts of fibreglass and the air-smoothed casing left plenty of internal room for expansion. The wheels were of a style never before seen on the Southern: called ‘’Bulleid-Firth-Brown’’, these were based on the North American ‘’Boxpox’’ type of wheel. Rather than following the customary practice of constructing wheels with spokes, the ‘’Boxpox’’ approach involved bridging together individual plates of metal. This aimed to produce an improved distribution of stresses over the wheel, compared with the spoked variety, and also sought to reduce potential weight by a tenth. For the technically minded, the absence of reciprocating balance weights from the driving wheels aimed to reduce the ‘’hammer-blow’’ damage effect on the track.

Locomotives comprised three 16-inch diameter cylinders, one of which was located inside, all driven by separate valve gear and connected to the middle coupled axle. Linking the valve gear with the main driving axle were a series of chains – a Bulleid innovation – all housed within a 40-gallon oil bath. Physically, there was no room to install conventional Walschaerts’ valve gear, which, on the plus side, allowed patents to be avoided. The concept of the bath was novel, for it saw that inaccessible moving parts were constantly oiled automatically, avoiding the need for manual lubrication at various points around the engine. However, with the new developments also emerged major faults: once in service, the chain-driven valve gear became troublesome. Essentially, deficiencies in welding saw that the oil baths leaked, which caused track adhesion issues and, in some cases, resulted in the fibreglass boiler cladding catching light. Bulleid’s Pacifics employed a high level of welding, for it reduced overall construction time. Having been developed during World War II, economies had to be taken during the design of the valve gear: originally, a propeller shaft arrangement, complete with gears, was to be employed, but parts would have been difficult to source. Consequently, oil consumption remained abnormally high until rebuilding of the locomotives took place (more of later).

The MN Class were the first English steam engines to be completely lighted by electricity. All Bulleid Pacifics were equipped with a 24-volt electrical generator to power headcode lights, cab lights, and lights underneath the air-smoothed casing to facilitate servicing. Unfortunately, even the revolutionary casing gave rise to its own set of problems. Maintenance teams found it difficult to remove and refit, and unlike traditional-looking engines, its very presence saw that the Bulleid locomotives lacked stepboards alongside the boiler, further hindering access to parts during repairs. 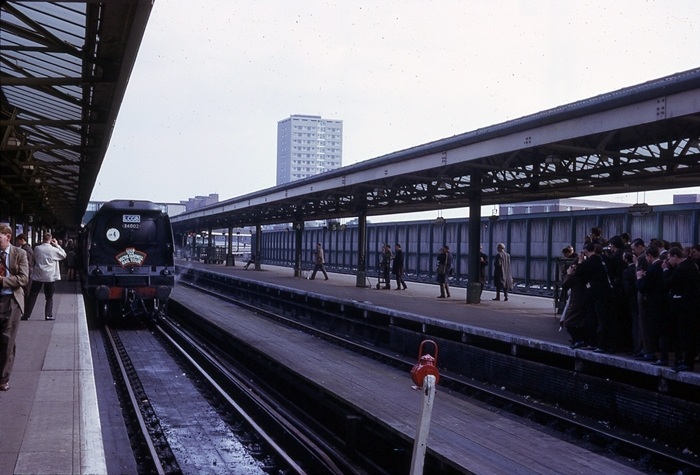 No. 34002 ''Salisbury'' is seen at Portsmouth Harbour's platform 3 on 3rd October 1965, after arriving with ''The Vectis Farewell Rail Tour'', organised by the ''Locomotive Club of Great Britain''. This ran via Chichester and also involved a return journey between there and Lavant, hauled by ''Coffee Pot'' Nos. 33020 and 33027. After a ferry crossing to the Isle of Wight, the tour continued and traversed the remaining lines of the island, before returning to Waterloo from Portsmouth behind Standard Class No. 73155. As for No. 34002, this locomotive was withdrawn April 1967. © David Glasspool Collection 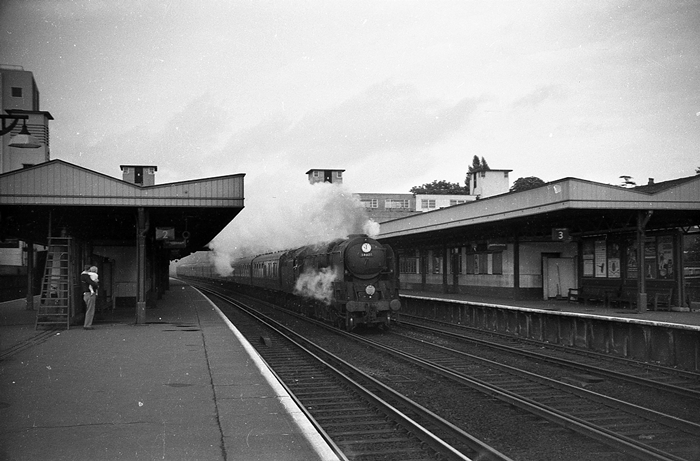 The distinctive environs of Surbiton station are seen in this view of rebuilt No. 34003 ''Plymouth'', as it races through non-stop on the centre line with a train for its namesake, in about 1963. This engine was rebuilt in September 1957 and was immediately re-allocated to Bricklayers Arms (73B) from Exmouth Junction. For three years it worked Kent Coast expresses out of Charing Cross and Cannon Street, before electrification saw it re-allocated again, this time to Salisbury. It was one of the earlier Pacific withdrawals, being taken out of service in September 1964 and scrapped in December of the same year. Many of the Bulleid engines had been made redundant at that time by dieselisation of the lines west of Salisbury. © David Glasspool Collection 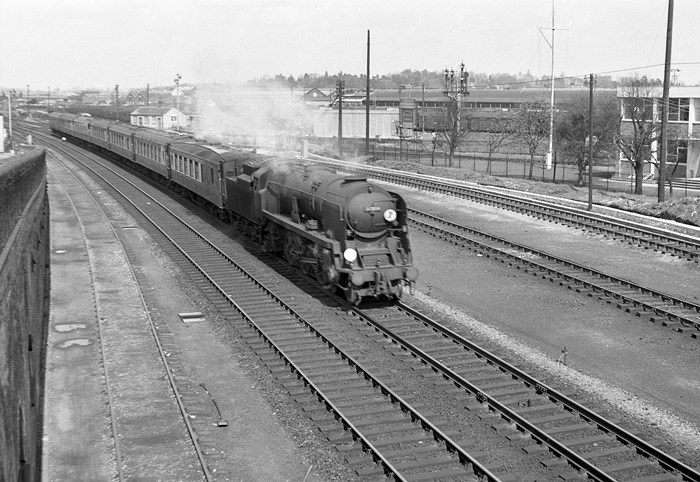 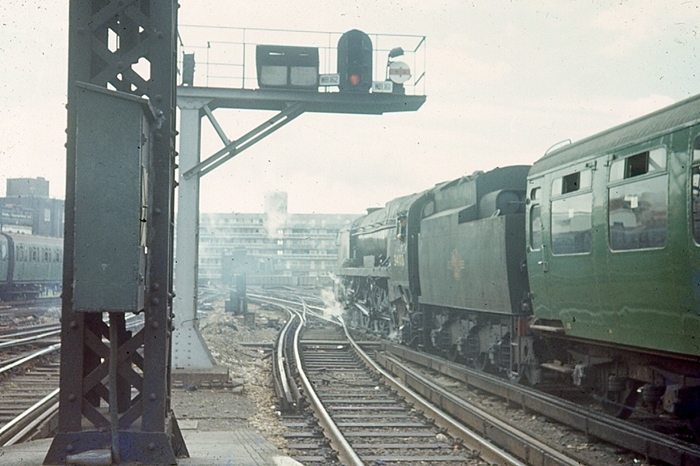 The end is nigh: in 1967, No. 34013 ''Okehampton'' departs Waterloo, the first vehicle in tow being a remarkably clean Bulleid-designed coach. No. 34013 survived right until the end of steam on the South Western Division, in July 1967. By this time, it had been in its rebuilt state for nearly a decade, having been so converted in October 1957. © David Glasspool Collection