In 1968, brewer H. P. Bulmer announced their intention to open a railway centre at the company's Hereford factory. The cider producer had been based at the same site since it was founded in 1887 and the premises also had a direct connection with British Rail. Ex-GWR 4-6-0 "King" Class locomotive No. 6000 "King George V" was chosen as the star attraction and was going to be in the company of five Pullman cars purchased by H. P. Bulmer from BR. Together, the locomotive and coaches would form an exhibition train to tour the country promoting the company's history and product range, and the first year of operation was envisaged to be 1969.

"King George V" was withdrawn from BR service in December 1962, the entire "King" class being displaced by diesel hydraulic traction. The locomotive was presented to Swindon Council for preservation and remained for a short period at Swindon Works. No. 6000 moved to Stratford in East London for storage on 4th November 1964, when it was towed from Swindon whilst coupled to withdrawn ex-Taff Valley Railway 0-6-2 No. 28 (later GWR No. 450 and also now preserved).

In 1968, Swindon Council agreed to lease the "King" to H. P. Bulmer. The locomotive was subsequently moved to an engineering firm in Newport, South Wales, which the cider firm had contracted to undertake a full overhaul at a cost of £250,000 (£4,259,000 at 2018 prices). The fully restored engine re-emerged at Bulmer's Railway Centre in November 1968 and was looked after on behalf of the company by the "6000 Locomotive Association".

No. 76 was renamed "Eve" and converted into a combined bar and exhibition carriage to showcase the products of the Bulmer Group. "Aquila" was largely restored to its original condition, except livery (more of later). Car No. 83 was converted into a museum carriage, detailing the story of the cider industry in Herefordshire, and renamed "Prinia". No. 36 was renamed "Morella" and turned into a cinema coach. Finally, No. 64 was going to remain in its existing guise, at least internally, but be renamed "Christine".

The names of the carriages were reportedly those of the wives of H. P. Bulmer's directors. The livery applied to the carriages was green, white, and red. The red and green replaced the original Pullman Umber at the top and bottom of the carriages respectively, whilst white was used in place of cream. Indeed, to the untrained eye from a distance, the Bulmer scheme looked like the standard Pullman livery with a red bar below the roof line.

BR had imposed a ban on steam traction across its entire network after the last engines were withdrawn from service in August 1968. The BR Board's mentality at the time was that they did not want out-of-date technology of private owners running on their main lines. The exception to this rule was No. 4472 "Flying Scotsman" which, through an agreement between the locomotive's then owner, Alan Pegler, and BR, was permitted to run on the latter's rails until 1971. However, No. 6000 was prevented from being used on the exhibition train across BR network, limiting it to operating on Bulmer's own railway metals at its Hereford base, which comprised approximately three track miles.

In 1971, No. 6000 broke the BR steam ban after Bulmer successfully negotiated to run their exhibition train, fronted by the "King", on BR's lines. The inaugural run was on 2nd October of that year, comprising a return trip from Hereford to Tyseley, Birmingham. This was followed on Monday 4th October by a run from Birmingham Moor Street to Kensington Olympia, the train being stabled at the latter until the 9th. No. 6000 used the Greenford Triangle on 4th October to face in the opposite direction for the return trip.

Since No. 6000 had been built to the generous proportions allowed by the GWR's former Broad Gauge lines, the locomotive was out of gauge for the majority of BR's network. No. 4472 "Flying Scotsman" was drafted in to replace No. 6000 on those lines which the latter was unable to run, although BR specified only a handful of routes that steam traction could operate. No. 4472 had returned to the UK in February 1973 after a financially disastrous tour of the USA which had left the locomotive stranded on the other side of the Atlantic in the hands of creditors. The former owner, Alan Pegler, had been declared bankrupt and No. 4472 was subsequently purchased from the creditors by William McAlpine, a director of civil engineering firm Sir Robert McAlpine Ltd.

No. 6000 was based at Bulmer's Railway Centre, Hereford, until late 1987, when the company's lease expired. The locomotive was returned to Swindon Council, which put it on static display at the railway works in 1988. The Cider train of five Pullman cars was sold to VSOE Ltd (owned by "Sea Containers Services Ltd"); the carriages were to become candidates for use in the "British Pullman" train, which had been inaugurated in November 1981. None of the carriages became permanent members of the VSOE fleet and were subsequently sold on. 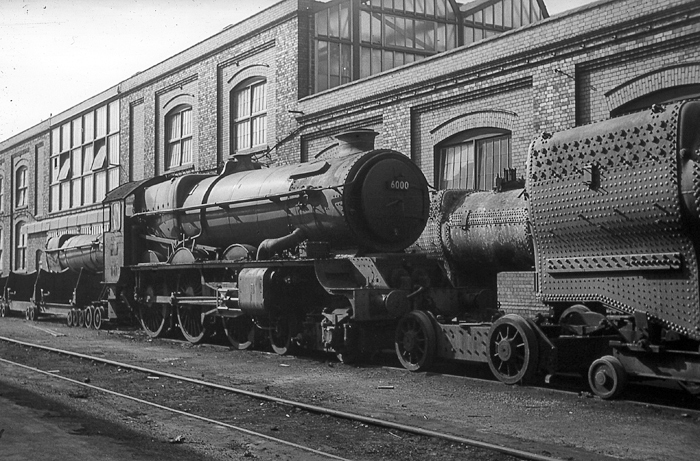 Nine months after withdrawal, No. 6000 is depicted outside of Swindon Works lacking a tender. The bell had also gone, as well as nameplates and cab side cast plates, but the smokebox door retained a number for identification. © David Glasspool Collection 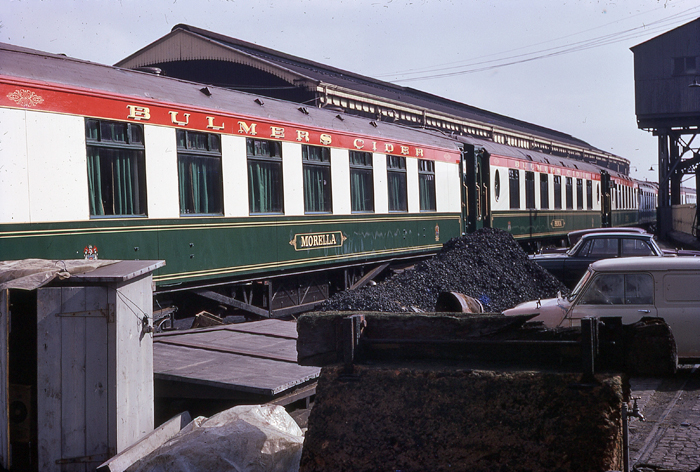 The refurbished Pullman cars are seen parked in the goods yard at Brighton during an outing in 1969. Cinema carriage "Morella" (formerly No. 36) can be seen with curtains drawn, so perhaps a film was showing at the time. Beyond is "Prinia" (ex-car No. 83), the museum carriage. The formation of five Pullmans was also joined by a couple of BR Mk 1 carriages and, given BR's steam ban, the train had presumably been diesel-hauled from Hereford. © David Glasspool Collection 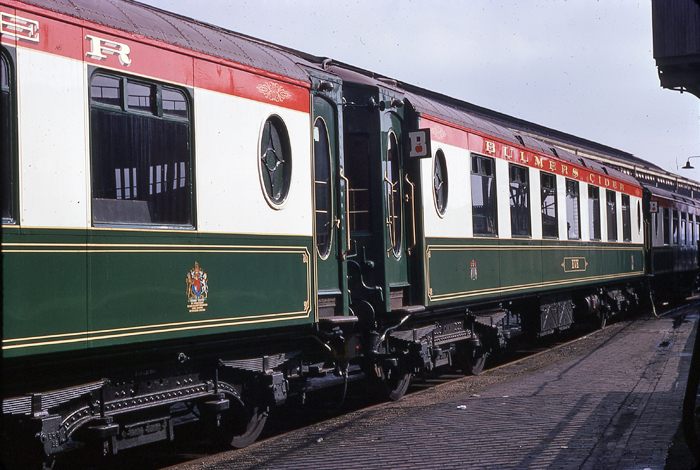 The text below the crests on the carriages read "By appointment to Her Majesty the Queen, cider makers, H. P. Bulmer Limited". The decorative lining of the carriage was as per the previous Pullman scheme. Indeed, to the untrained eye, the red line below the roof is the only stand out difference of Bulmer's livery. Note the "B" door signs on pullman car "Eve". © David Glasspool Collection 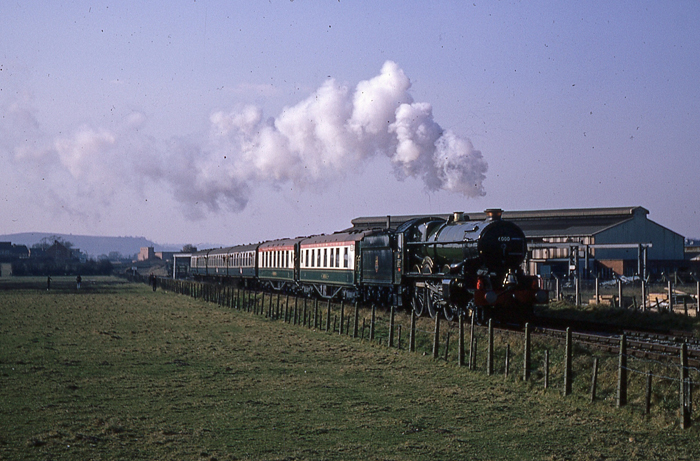 A gleaming No. 6000 is seen on the demonstration line at Bulmer's site in Hereford, with two Pullman cars (the first being "Aquila") and three BR Mk 1 coaches. The "6000 Locomotive Association" looked after the engine on behalf of H. P. Bulmer. © David Glasspool Collection 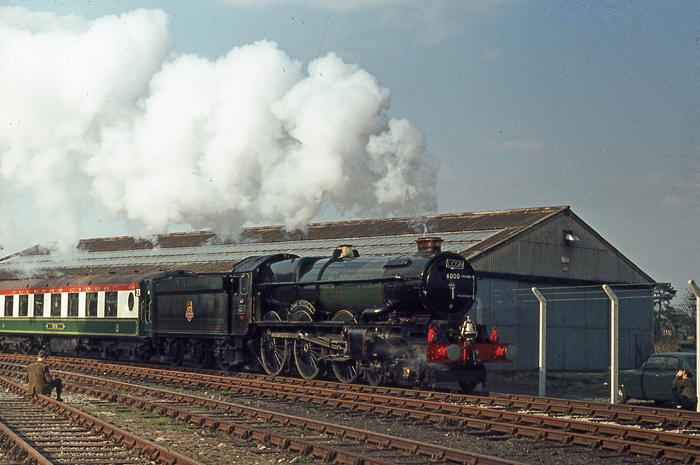 The "Locomotive Club of Great Britain" (LCGB) and "Great Western Society" (GWS) organised a rail tour from Paddington to Bulmer's Hereford site, the outward trip running via Didcot, Swindon, Severn Tunnel Junction, and Abergavenny. A diesel hydraulic "Western" locomotive, No. 1047 "Western Lord", covered the round trip from Paddington, but "King" Class No. 6000 was at least able to run on Bulmer's tracks, as seen above. Behind the locomotive is Pullman car "Eve", formerly No. 76 of 1928. © David Glasspool Collection