In 1846 the South Eastern Railway had been granted permission by Parliament to construct a 22½-mile line from London Bridge to Dartford, Gravesend and Strood, which would latterly form the backbone of the North Kent suburban rail network. Completion came in July 1849 as services commenced along the SER's line on 30th that month. The SER had experienced much fierce rivalry when it was compelled to run trains over the lines of the London & Brighton and Croydon Railways between Redhill and London Bridge on its trunk line to Dover, thus the company deemed that having its own exclusive access to the capital for its North Kent line was a must. Therefore, the SER took out a 999 year lease on 1st January 1845 on the whole of the London & Greenwich Railway's line from London Bridge, providing the company with non-rivalled access to the capital's first terminus.

Another of the SER's competitors in Kent was the London Chatham & Dover Railway, the company of which had constructed a number of duplicate routes in a bid to threaten the existing SER presence. When the LC&DR was near to reaching the West End of London, the SER knew that it had to gain its own access north of the river, the position of London Bridge no longer being adequate. Any extension to the West End would not be an easy task and like the London & Greenwich Railway, would be undertaken at a huge cost upon a series of viaducts, carrying the railway over the existing dense urban areas. Furthermore, the SER needed to locate a suitable area to construct its new London terminus, the site of a local marketplace being the eventual candidate. The area of land was ideally placed along the Strand, with prime access to Parliament and Buckingham Palace, but it was heavily restricted in comparison with its counterpart at Victoria, therefore it would never be a terminus numerous in platforms. To undertake the task of building, the SER instigated a supposedly independent concern known as the ''Charing Cross Railway Company’’, which would be supported by the SER and was, unsurprisingly, later absorbed into the larger company on 1st August 1864. The work initiated in 1859 as permitted by an Act of the same year, the most difficult and laborious task being the building of the viaduct from London Bridge to the South Bank. This was required to form a track bed of just over 1⅓ miles, although its exit from London Bridge was to be a rather circuitous one, negotiating through the heavily built up area of Southwark. The viaduct was shortly followed in 1860 by the assembling of a lattice iron girder bridge, designed by Sir John Hawkshaw and weighing 7000 tons, to stretch the gap over the Thames to the station site. Some bridge supports of the existing suspension bridge, designed by famed GWR and Bristol & Exeter Railway engineer Isambard Kingdom Brunel, were reused. Having originally opened on 1st May 1845, the earlier structure was subsequently dismantled and re-erected on the outskirts of Bristol, at Clifton; it had hitherto been used by pedestrians traversing between the South Bank and Hungerford Market. Building of the station was gruesome, for it involved excavating some 7000 corpses from a cemetery which the line made an incursion on; these were subsequently conveyed on the Funeral Train by the London Necropolis & National Mausoleum Company from Waterloo, for reburial at Brookwood, near Woking. The whole extension cost the SER £4 million, which, at 2005 prices, equates to £264½ million.

Opening of the station commenced on 11th January 1864 for those services to Hayes and Greenwich, but all structures had not been wholly completed by this time and it would be another year until the SER's purpose-built hotel, backing onto the Strand, would open for business. Commuter services from the North Kent Line via Dartford and those from the Medway Valley Line arrived at the terminus on 1st April 1864, whilst those to Tonbridge and beyond started on the 1st of the following month. The whole station had been erected on a succession of arches to bring the platforms and concourse to street level, these subsequently being used for storage. The hotel finally opened on 15th May 1865 and from the outset received more custom than its poorer relation which was to open at Cannon Street a year later. The hotel complemented a graceful curved overall roof covering six wooden platforms and a modest concourse area. The trainshed had been designed by Sir John Hawkshaw, perhaps better known for his later work at Cannon Street in 1866. Originally, four lines were accommodated on Hungerford Bridge, these of which fanned out into seven tracks on the northern bank. With the platform numbering ascending from south west to north east, the seventh track was sandwiched in-between the lines of platforms 2 and 3, forming a rolling stock storage siding. Immediately where Hungerford Bridge met the northern bank, a signal box was suspended across the quadruple track upon a lattice bridge, this in turn upheld by brick supports. Interestingly, it was not of the more common SER design, but was instead installed by contractor Saxby & Farmer (whose work is seemingly more common on LC&DR lines). Approximately 30 foot in length, one-storey high and with a pitched roof, the cabin was of all timber construction to reduce potential weight. Upon its roof, it also supported early semaphore posts of decided curiosity. Three wooden signal posts, of equal distance apart, each consisted of four semaphore arms and a pair of lanterns. Whilst these elevated signals were readily visible from all platforms on a clear day, deciphering them became a nightmare when fog prevailed. 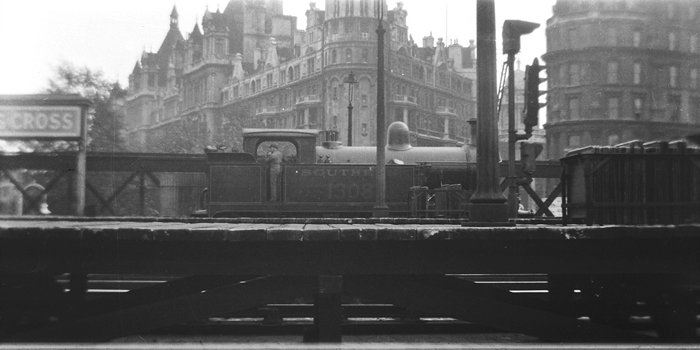 A view from about 1938 shows ex-SE&CR ''H'' class No. 1308 stabled at the platforms - the train shed and buffers are to the right, beyond the limits of the photograph. The colour aspect lights date from 1926, when a new signal box was opened across the tracks, at the end of the platforms. This view is in fact little changed today: in the background, on the far right, can be seen the ''Hôtel Métropole''. To the left of this, and taking centre stage, is the huge Gothic colossus, housing the ''National Liberal Club'' and ''Whitehall Court''. The engine, No. 1308, became No. 31308 under BR, and remained in service until December 1962. © David Glasspool Collection 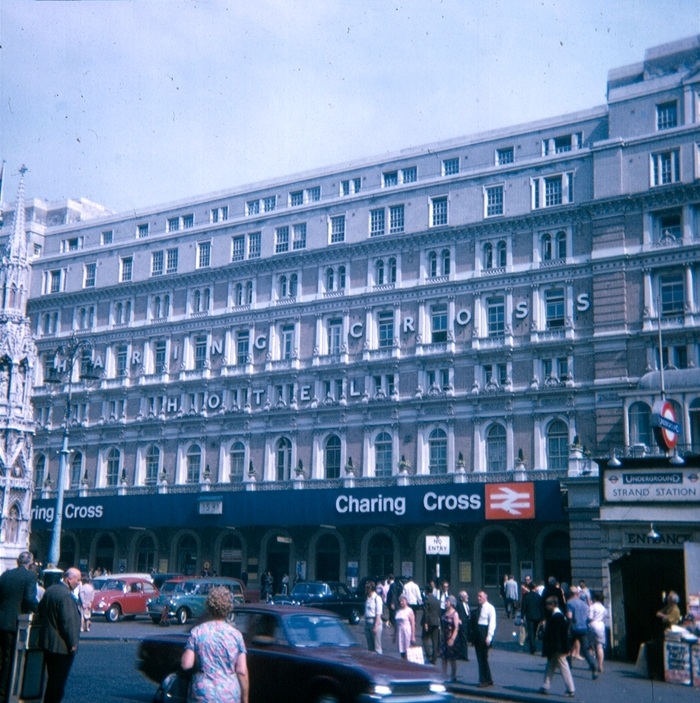 At the time of this picture, the Charing Cross Hotel was run by ''British Transport Hotels'', a subsidiary of the British Railways Board. In the car park can be seen a Morris Minor Van and a Volkswagen Beetle. Notice at this time that the Underground station was known as ''Strand'', a name it retained until 16th June 1973. © David Glasspool Collection 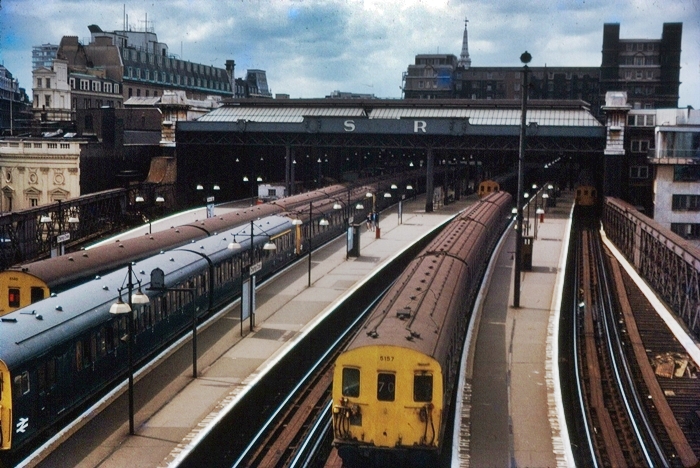 A splendid panorama, viewed from the SR signal box, shows the terminus full of suburban units. In the immediate foreground is Bulleid-designed 4 EPB No. 5157, seen departing with a Dartford service via Bexleyheath. This view shows the full extent of the SE&CR ridge-and-furrow trainshed roof, in addition to the rear of the British Transport Hotel. Hexagonal lampshades are plentiful upon the platforms. Also note the ''SR'' lettering on the trainshed and the shields which flank either side. © David Glasspool Collection