Ashford has an illustrious railway heritage dating right back to 1842, when the first rails were laid in the area. On 1st December of that year, the first revenue paying passengers were conveyed from London and until the extension to Folkestone in June 1843, Ashford served as a terminus. In 1847 the South Eastern Railway had established a locomotive and carriage works here and by the 20th Century, an engine shed was on site, in addition to five routes radiating out of the town.

Chart Leacon is of much more recent origin and one of the resultants of the Kent Coast Electrification Scheme. In connection with the electrification of the ‘’Chatham’’ line, the engine shed at Ramsgate was scheduled for conversion into a heavy maintenance depot for the then new EMU fleets coming into service. The full electric timetable came into operation on 15th June 1959, but Ramsgate was not completed until 1961, it having only closed to steam in December of the previous year. However, the former carriage cleaning shed had received third rail by this time, as had the former rolling stock sidings north of the station. An electric depot had also been built within the maze of lines at Stewarts Lane, this being ready when the ‘’juice’’ was turned on. Ramsgate eventually became the main EMU depot for the ‘’Chatham’’ main line and a similar dedicated facility was also destined for the ex-SER main line via Tonbridge. As part of the electrification scheme’s ‘’Phase 2’’, which included the extension of third rail from Sevenoaks Tubs Hill to Dover, a heavy maintenance EMU depot was planned for construction at Ashford. At this time, both the engine shed and works were still active, which meant that no room was vacated on original railway land for the facility. Thus, it was decided to position the complex a mile west of Ashford station, on the site of a swamp on ‘’up’’ side of the trunk line to Tonbridge. The accelerated electric timetable on the Tonbridge route came into use on 18th June 1962, but Chart Leacon was commissioned in time for the Maidstone East to Ashford electrification on 9th October 1961. The complex was eastward-facing and fundamentally constituted of two parts: a heavy repair / maintenance depot and an inspection shed. The former, consisting of four pitched-roof sections and clad with asbestos, housed nine terminating tracks, each laid above an inspection pit. The latter, attached to the heavy repair building’s northern elevation, contained four tracks, these also equipped with inspection pits. 220 foot in width, the heavy repair depot was 612 foot 8 inches at its longest point, and equipped with a pair of fifteen ton lattice-patterned aerial cranes, these supported over a double track on wall-mounted rails. The cranes were accompanied by a dozen small turntables, incorporated to allow transference of bogie sets between repair lines. The inspection shed’s dimensions are considerably smaller than the repair depot’s, standing at 69 foot 6 inches in width, with a length of 320 foot: its northern side is also flanked by an additional seven exposed sidings. It is worth noting that this depot also had facilities for refuelling the Southern Region’s DEMU fleets. Stock - EMU and DEMU - was overhauled here after every 100,000 miles, and day to day maintenance was also carried out on diesel and electric locomotives. For these tasks, Chart Leacon employed no less than 400 people.

Ashford’s shed closed to steam in 1963, but until 1968 was used for stabling diesel locomotives, thereafter being demolished. Ashford Works remained in operation until its closure in 1981, which left Chart Leacon as Ashford’s only depot (excepting the stabling sidings for engineers’ vehicles and EMUs to the east of the station). In July 1994, with privatisation in full swing, Chart Leacon was put up for sale, along with the maintenance depots at Doncaster, Eastleigh, Glasgow, Ilford, and Wolverton, and a number of companies – which were required by the government to sign confidentiality agreements concerning the precise details of the items for sale - were offered to place bids. ABB Customer Support Ltd eventually won the day, the sale of Chart Leacon being made final on 5th June 1995 at a price of £19.46 million. On this day, the same company also purchased Doncaster and Ilford Maintenance Depots for identical prices.

From April 2014, Chart Leacon ceased to be a rail depot. By this time, the depot had been operating under the ''Bombardier'' name; the original buyer, ABB, had been acquired by ''DaimlerChrysler Rail'' in 1999, which in turn was bought out by Bombardier in 2001. All the remaining Bombardier staff were transferred to Ramsgate and are now South Eastern employees.

With thanks to Adrian Rand for providing 2014 closure information. 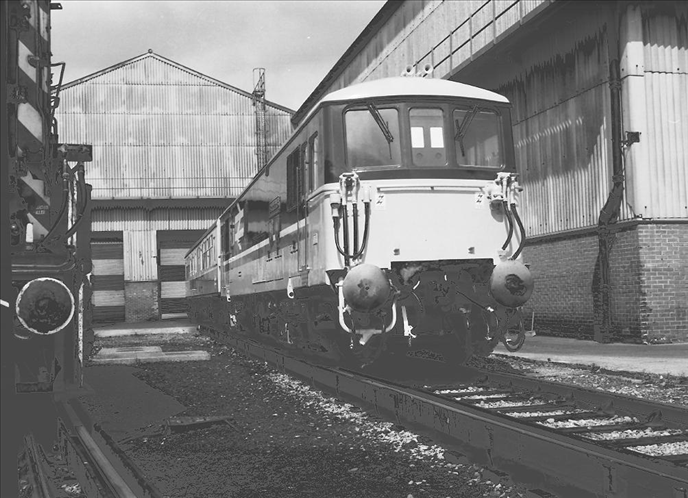 On 7th June 1986, Class 73 No. 73142 ''Broadlands'' was on display at a Chart Leacon Open Day. It was residing on those tracks not visible from the running lines. The Electro -Diesel was seen pairing with former ''Hastings'' unit buffet car No. S60755. The buffet vehicle formerly belonged to ''Hastings'' unit No. 1036, having been removed from this formation in 1964. In 1969, it re-emerged as an inspection saloon for the General Manager of the Southern Region. © David Glasspool Collection 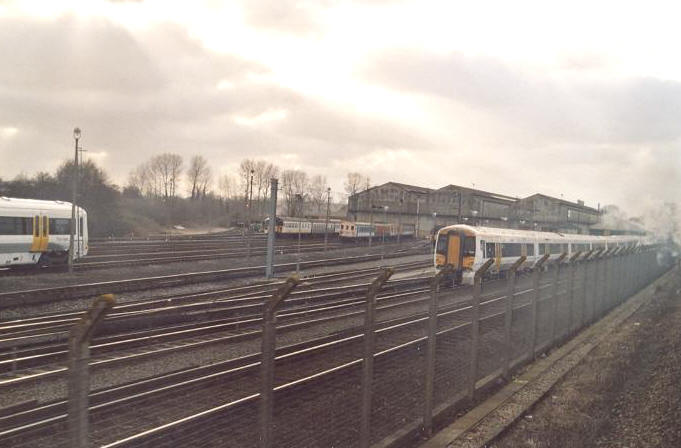 The whole complex is seen here on 25th February 2006. The four-road inspection shed can be seen on the far right and the same slam-door units are on show, although the nearest is mostly obscured by Class 375 No. 375630. © David Glasspool 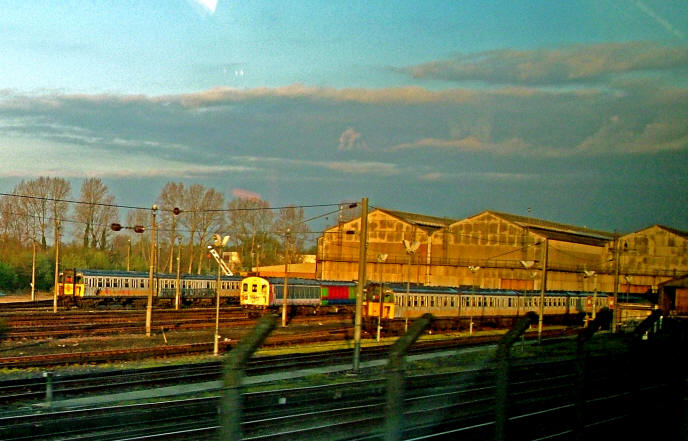 This view, captured on 28th April 2006 by Ted Hamer, shows three of the four main pitched roof sections of the heavy repair depot and, especially in light of the date, an interesting array of stock. A 2 EPB formation, now in departmental use, is flanked by a pair of 4 Veps. The last scrap movement of slam-door stock from Ramsgate was on 3rd November 2005, which suggests the 4 Vep units shown here are from the Central Division. They were still in evidence in June 2007. © Ted Hamer