Significant increases in traffic along the route, particularly after the completion of the line to Thanet (through running between Victoria and Ramsgate being possible from 5th October 1863), saw the cramped layout at Chatham become increasingly congested. Consequently, in 1886, the LC&DR instigated a comprehensive rebuilding of the station, which sought to improve platform capacity. There was no possibility of expanding the layout in any direction, for tunnel portals existed on two sides of the cutting, whilst to the north and the south the station was flanked by residential development. The solution to this was, at the time, novel, and to make better use of the layout’s existing width, the 1886 plans saw the demolition of the existing ‘’down’’ side station building, which resided at platform level. This was replaced by an attractive ‘’high-level’’ station entrance, which straddled the tracks and faced onto a rebuilt road bridge. The replacement station building measured about 130-foot-long by 35-foot-wide, was single-storey, and of crème brick construction. The building incorporated a slated pyramid-shaped roof, and demonstrated arched-shaped orange window frames – a feature synonymous with the LC&DR. The top of the roof was frescoed with ornate ironwork, and the Hackney Carriage forecourt was equipped with a 60-foot-long flat-roofed canopy, attached to the station building. A two-storey-high appendix, which sprouted up from the platforms, to road bridge level, existed on the northern side of the high-level entrance.

Down at rail level, demolitions were extensive: all existing platform surfaces were swept away, and both goods and engine sheds were razed to the ground, but the turntable remained. A completely revised track layout saw the provision of five platform faces serving four lines: two island surfaces had been produced, in addition to one side platform, and the northern-most track was served on both sides by a platform face. Both islands, which were linked by a fully enclosed 55-foot-long footbridge, comprised timber-built platform offices, and these in turn were protected by lengthy pitched-roof canopies, demonstrating a wooden valance. The northern side platform was reached by means of a staircase within the aforementioned two-storey high appendix to the main ‘’high-level’’ building. Strictly speaking, there was a sixth platform face, and a dock line, both located along the southern perimeter of the site, but these were used exclusively by goods traffic for the military. Much of the company’s goods traffic for the Medway Towns was handled at a then recently commissioned goods depot in Rochester.

Signalling had become much more advanced since the early days of the EKR, and contractor Saxby & Farmer was hired by the LC&DR to signal the new layout, with a full complement of semaphores. A pair of elongated two-storey-high all-timber signal boxes appeared at the station, one positioned at the London end of the ‘’down’’ island, the other at the ‘’country’’ end of the ‘’up’’ island. These were built to a standardised Saxby & Farmer design, complete with a pyramid-shaped roof, and smaller examples had also come into use at Farningham Road and Swanley Junction. Part of the first Chatham station is still in existence to this day, however: the lattice footbridge went to Kearsney.

Before moving on, it is worth reflecting, if only briefly, on the SER’s station which shared the town’s name: ‘’Chatham Central’’. The company had begun contemplating operating services to Chatham by means of running over LC&DR lines from Strood. However, a non-cooperative LC&DR forced the SER to rethink its plans, and as a result, the company embarked on the construction of its own route to the Naval town (perhaps the former was getting its own back for the SER’s stubborn attitude in 1858). A 220-yard-long lattice girder bridge was assembled by the SER over the Medway, parallel with the existing LC&DR double-track structure, and a short branch built to as far as the Rochester station of the rival company; total completion coincided with the latter's opening on 1st March 1892. The SER named its then new terminus ''Chatham Central'', although it was neither central in Chatham, nor within the town's boundaries at all! Naturally, this needless branch met its fate on 1st October 1911, and the ex-LC&DR station resumed its status as the sole station purporting to serve the town. The SER's expensive undertaking had not been totally in vain and from 29th June 1919 onwards, all trains were handled exclusively by the former company’s lattice girder bridge over the Medway. 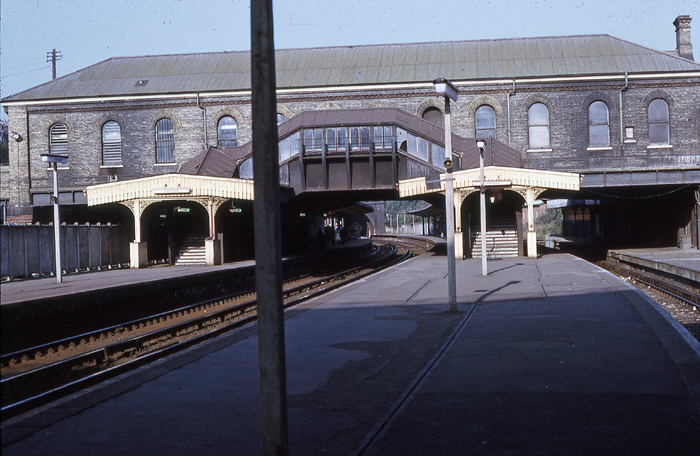 A London-bound view shows that after rationalisation of the layout as part of Phase 1 of the Kent Coast Electrification Scheme, part of the "down" loop was retained as a south east-facing siding to serve an adjacent parcels depot. The connection at the London end had been taken out to permit extension of the platforms up to the portal of Fort Pitt Tunnel. The siding still had a platform face either side and the LC&DR canopy valances remained in-front of the footbridge entrances, but had been replaced beyond the main building. Note the still extant steam-era canopy on the right-most platform surface, under the bridge. © David Glasspool Collection 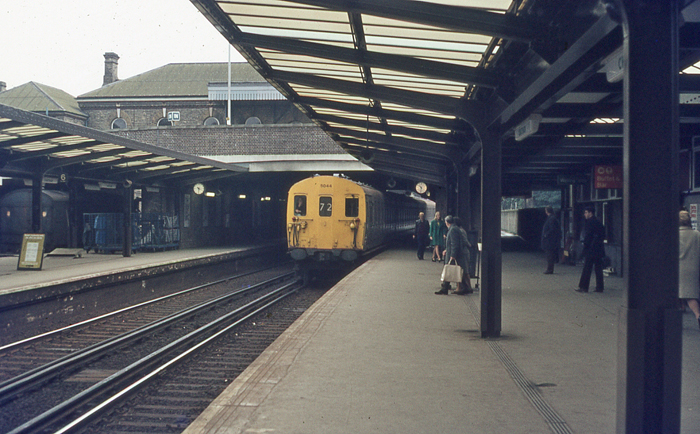 A Gillingham to Charing Cross service in the form of a Bulleid-designed 4 EPB is seen at platform 1. On the left can just be seen the end of a parcels van in the "down" siding, formerly the "down" platform loop. The canopies here date from 1959. © David Glasspool Collection 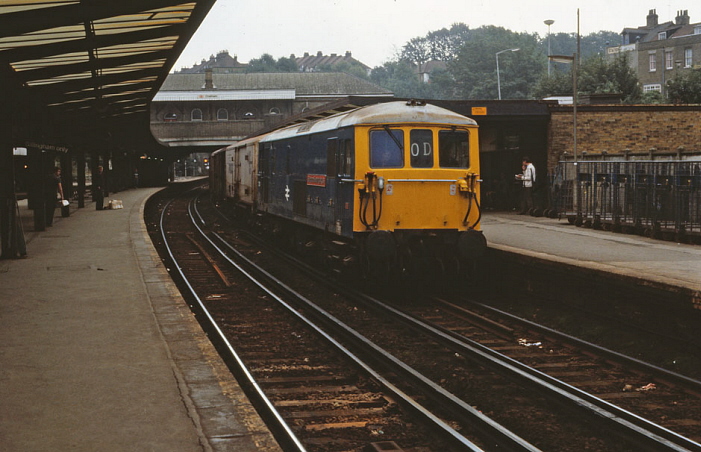 Class 73 No. 73101 ''Brighton Evening Argus'' is seen passing through Chatham's ''up'' platform, with a train of ferry vehicles, the first of which is an ''Interfrigo''. This view not only shows the canopies and offices of the Kent Coast Electrification modernisation to good effect, but also reveals, on the far left, the two platform faces which still served the truncated single track parcels siding. The main building's roof still lacks ornate ironwork, a feature which will be seen in subsequent views. © Chris 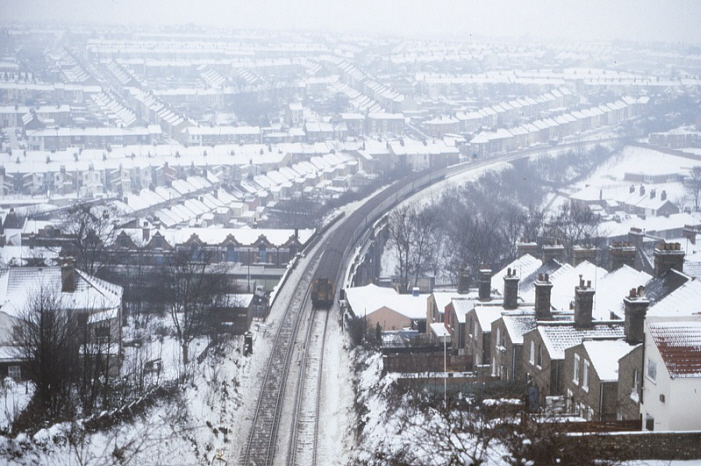 A coast-bound formation, led by a 4 CEP, is depicted passing over Luton Arches, between Chatham and Gillingham, in this wonderfully wintry scene from 1985. The train will shortly pass through Gillingham Tunnel, 897 yards in length © Chris 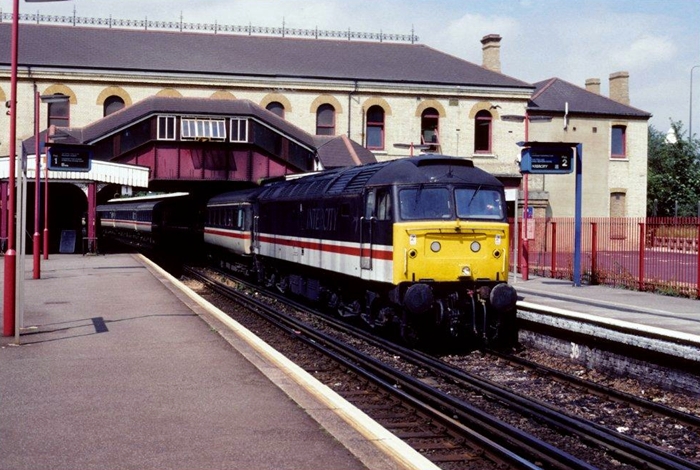