Once a typical rural SER station located within the Stour Valley, Chilham today presents a rather Spartan scene to the waiting passenger. A pair of tiny glazed shelters upon the platforms are the only offering of comfort from the elements, and the most significant structure is a prefabricated concrete footbridge from the days of the Kent Coast Electrification Scheme.

8¾-miles from Ashford, Chilham opened with the line between the former and Canterbury on 6th February 1846. Double-track from the outset using 70lbs/yard rail, subsequent extensions of the line by the South Eastern Railway (SER) to Ramsgate and Margate were opened on 13th April and 1st December of the same year respectively. Unlike at Wye, where the SER went to the trouble of providing a large Gothic station building, the company adopted its more familiar economical approach at Chilham. Indeed, the main building - situated on the Canterbury-bound ("down") platform - was a single-storey structure of tongue-and-groove timber construction, with a hipped slated roof. This had a canopy affixed to its forecourt elevation, but lacked one over the platform and, unusually, the structure was fiited with casement windows rather than the SER's preferred sash-style type. Finally, an annex at the building's Ashford end housed gentlemen's toilets.

The Ashford-bound ("up") platform was equipped with a waiting shelter, also of tongue-and-groove timber construction. This had a backward-sloping roof, wraparound sides, and rivalled the "down" side main building in length. Both platforms were adorned with diamond-shaped gas lamps upon barley-twist posts. As was the case at Wye and the latterly-opened station at Chartham, no footbridge was provided at Chilham, a track foot crossing at the Canterbury end of the layout being used for passage between the platforms. The latter were lined at their rears by iron railings.

For a station of its size, goods provision at the site grew to quite impressive proportions, with sidings being present beyond either ends of the platforms. Agricultural traffic was likely an important source of receipts, but an adjacent gas works, opened in 1868, saw that coal was handled by the railway here, too. The track layout is illustrated in the below diagrams, but worth noting is the brick-built goods shed at the Canterbury end of the layout, on the "down" side and, at the Ashford end of the site, the dock platform terminating some way short of the main station building.

In 1893, the primitive signalling at the station was replaced, for which the SER drafted in Saxby & Farmer. One of this contractor's attractive gabled signal boxes was built beyond the Canterbury end of the "up" platform. Identical cabins were erected by the same contractor at Wye, Sturry, and Grove Ferry stations, but the signalling at Chartham and Canterbury was kept in-house by the SER.

By 1907, the forecourt canopy of the main building had been reduced in size, so much that it was not much wider than a double-door entrance. South of the station, a trailing crossover had also been inserted between the running lines - one to the north had existed since the earliest years. Further alterations were made by the Southern Railway, which included removing the diamond-shaped gas lamp shades, but retaining the original barley-twist posts, to which were subsequently attached this company's trademark Swan Neck heads. It seems that during this company's tenure, a curious partial rebuild of the "up" platform's waiting shelter was carried out, whereby the lower half was reconstructed in brick. SR "Target" signs appeared, but beyond this, the station retained its SER guise.

Typically, as was the case at so many stations, the British Railways era was one of marked decline at the site, albeit combined with service modernisation. Of importance is Phase 2 of the Kent Coast Electrification Scheme, which affected 132 route miles of line and encompassed that section from Ashford to Minster via Canterbury. As part of this, a prefabricated concrete footbridge was completed between the platforms at Chilham in 1960. Electric services running to steam timings from Maidstone East to Ramsgate, via Canterbury West, commenced on 9th October 1961, and the full accelerated electric timetable came into use on 18th June of the following year.

Whilst the Kent Coast Electrification Scheme saw the abolition of multiple mechanical signal boxes and the introduction of colour aspect lights in the county, both routes to Canterbury, via Faversham and Ashford, remained as pockets of semaphore signalling. Chilham's Saxby & Farmer cabin soldiered on, partly to control the goods yard, this of which eventually closed to public traffic on 15th August 1966. The signal box was taken out of use on 27th October 1968, but cabins remained in operation at neighbouring Wye and Chartham. Happily, however, Chilham's signal box was spared destruction and instead, was dismantled and re-erected at Tenterden, on the preserved Kent & East Sussex Railway. The station there had lacked a proper signal box; given that the line was built to Light Railway standards, such features were deemed an unnecessary expense.

From 14th April 1969, the station was formally unstaffed and shortly afterwards, all platform structures, bar the footbridge of 1960, were demolished, reflecting an era when historic buildings were deemed surplus to requirements. Electric lighting was introduced to the station at this time, but indeed, a very small consolation for the structural economies.

In about 1990, somewhat token enhancements were made at Chilham by the installation of curved glazed "bus shelters" on either platform. These were replaced about fifteen years later by a new standardised shelter design. Whilst Chilham lost its bygone charm long ago, there today remains notable survivors of the SER period: the iron railings which continue to line the rear edges of both platforms.

Track plan after addition of trailing crossover between running lines at the Ashford end of the station, and construction of signal box. Click the above for a larger version. © David Glasspool

The only change to the track plan over the intervening five decades was the diverting of the "down" siding at the Ashford end of the layout into a saw mill complex. Click the above for a larger version. © David Glasspool 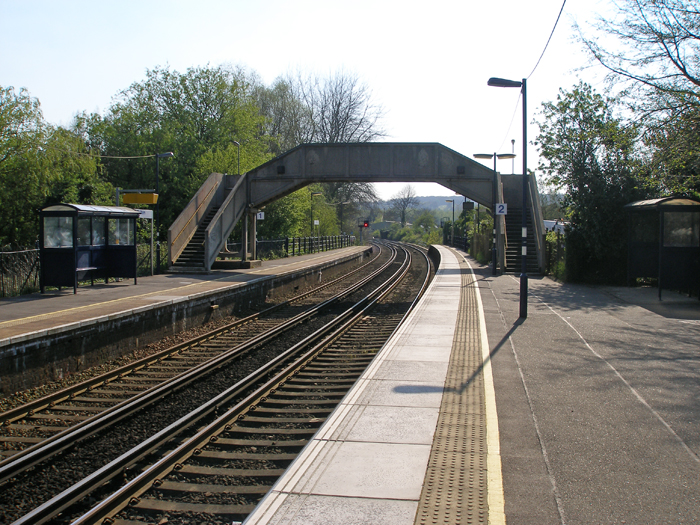 Nothing much to see here in this Ashford-facing view. The prefabricated concrete footbridge of 1960, now part of an increasingly endangered species, is the most substantial structure at the station, and is flanked on either side by small glazed shelters. However, the bricks of the platforms date from the earliest years, as do the iron railings behind each shelter. © David Glasspool 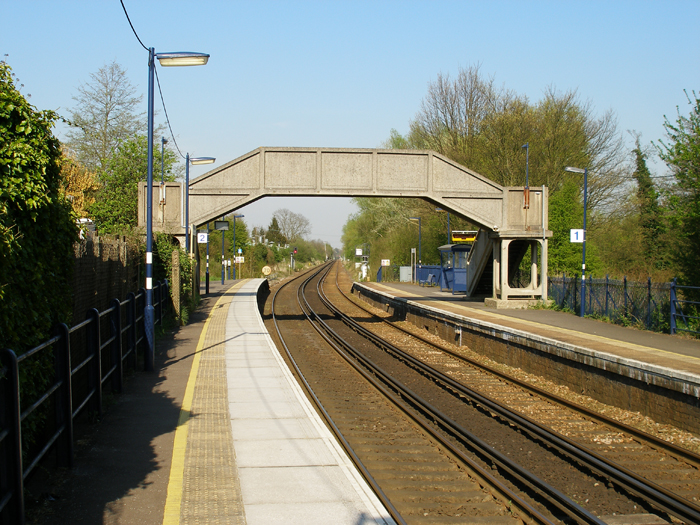 Looking towards Canterbury, we can see that the former sites of the sidings on either side of the running lines have returned to nature. About ⅓-mile distant on the 70 MPH section of track is Chilham Road Level Crossing, the original keeper's house of which still exists as a private residence. © David Glasspool