On 22nd July 1861, LC&DR trains began running between London and Dover by means of a much shorter route than the existing line of the SER’s. To level the playing field, the SER’s only option was to shorten its circuitous Dover line by eliminating the need for trains to be routed via Redhill. Significant steps towards this began with the successful acquisition of Royal Assent on 30th June 1862 for a twenty-four mile cut-off line between what is now St Johns, and Tonbridge. The distance to Tonbridge and beyond would be reduced by some 12½ miles, and the SER would no longer have to share metals with the LB&SCR from London Bridge. 1500 workers ensured the line was opened to traffic as far as Chislehurst by 1st July 1865. The first station here was a temporary affair, named ‘’Chislehurst & Bickley Park’’ (the suffix after the woodland to the west), existing as the end of the line for just under three years. When Sevenoaks Tubs Hill was reached on 2nd March 1868, a new station was provided at Chislehurst, 600 yards south of the existing platforms. Two platform faces were in evidence, coupled with a large single-storey red brick building with three pitched roof sections, the latter located on the ‘’down’’ side. This attractive structure is that which is still in evidence today and is of typical SER design, with similar examples appearing at Ashford and Tonbridge in the same year. What is interesting to note, however, is that both Orpington and Sevenoaks were subject to cheap clapboard structures – Chislehurst’s brick building perhaps reflected the likely clientele it would have received, there being a small number of large properties in the area. A marginally smaller version of the main building was also provided on the ‘’up’’ platform, sitting directly opposite its ‘’down’’ side counterpart. The ‘’Bickley Park’’ suffix did not last beyond the life of the first station, its removal coinciding with the opening of the Dartford Loop Line on 1st September 1866. Passenger trains finally began running through to Tonbridge and beyond from 1st May 1868.

The goods yard here was located on the ‘’up’’ side, next to the former site of the first station, and opened when the latter closed in 1868 and saw its platforms shifted 600 yards southwards. Five northward-facing sidings were in evidence, these controlled by a SER-designed signal box, positioned opposite the yard, on the ‘’down’’ side. The sidings were joined ten years later by one set of semi-detached cottages for railway workers. The 1868 station did acquire a single northward facing siding on its ‘’down’’ side, which terminated behind the platform. It seems appropriate to mention here that freight was the first type of traffic to commence along the whole of the Tonbridge cut-off line, such trains running from 3rd February 1868 onwards.

The SE&CR was formed in 1899, and this company appeared to act quickly in implementing a route upgrade programme. This followed in the footsteps of the LC&DR’s earlier quadrupling of its main line between Bromley and Bickley in 1894, and four tracks were to be put into use between St Johns and Orpington. Begun in 1900, this laborious project saw the total reconstruction of some stations, the opening of a new one, and direct connections being made between the ex-SER and ex-LC&DR main lines. At Chislehurst, the ‘’down’’ building remained, but that on the ‘’up’’ side was demolished to permit widening of the track bed. The advent of four tracks saw the creation of an identical number of platform faces, two of which constituted an island; all were linked by a subway. Like the ‘’down’’ side, the ‘’up’’ side acquired a northward facing siding which terminated behind the platform, and also became host to a new station structure, built in sympathy with that of 1868 (albeit having a shorter length). Protection from the elements was without doubt copious, with large canopies being present on all platform surfaces. These were built to the same design as those which had previously been installed at the rebuilt Shorncliffe (Folkestone West) station in 1881, utilising the valance pattern which had first been pioneered by the SER. The services of signalling contractor Saxby & Farmer were enlisted during the quadrupling scheme – this company had also been responsible for the re-signalling of the Charing Cross approaches in 1901. At the southern end of the island platform, a quite imposing signal box of this company’s emerged, it being virtually identical to that still in existence at Gillingham. The cabin was responsible for Chislehurst Junction, this of which came into use on 19th June 1904 on the completion of two single-track connecting tracks between the ex-SER and ex-LC&DR lines: one for the ‘’up’’ line and one for the ‘’down’’ line. Four track running between Elmstead Woods (at which there was no station) and Orpington had become a reality on 6th of the same month. Orpington Junction, which provided northward-facing single-track connections with the ‘’Chatham’’ line, had been in operation since September 1902.

''Schools'' Class No. 30909 ''St Paul's'' is seen speeding through platform 1, Charing Cross-bound, from Hastings. Swan neck gas lamps on barley twist posts abound, whilst we can also see the ''up'' side buildings of 1901 on the right, now sadly demolished. SR ''Target'' name signs are still in evidence, as are the black and white World War II stripes on the station run-in board. The hipped roof of the signal box can just be seen above the locomotive tender. © David Glasspool Collection 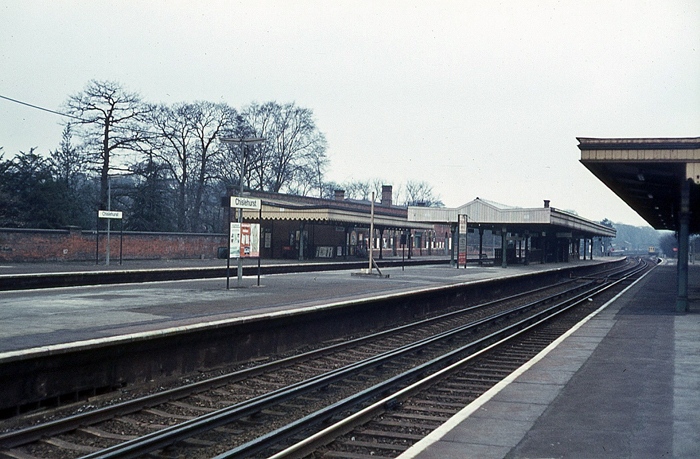 A London-bound view in 1971 shows that the main station building of the little-used "up" fast platform, commissioned as part of the 1904-completed quadrupling, was still in existence at this time, although the length of its canopy had already been halved. The island platform canopy had been subject to similar economies, the plain end valance being obvious, and had also lost some offices. © David Glasspool Collection 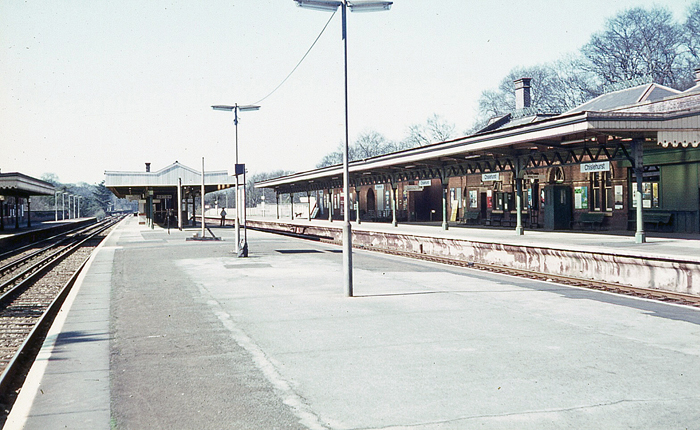 Looking towards London again, this time from the island, it is evident that the "down" main building retained the full extent of its canopy. However, most of the valance had disappeared, presumably because it was an obstruction for viewing signals. © David Glasspool Collection 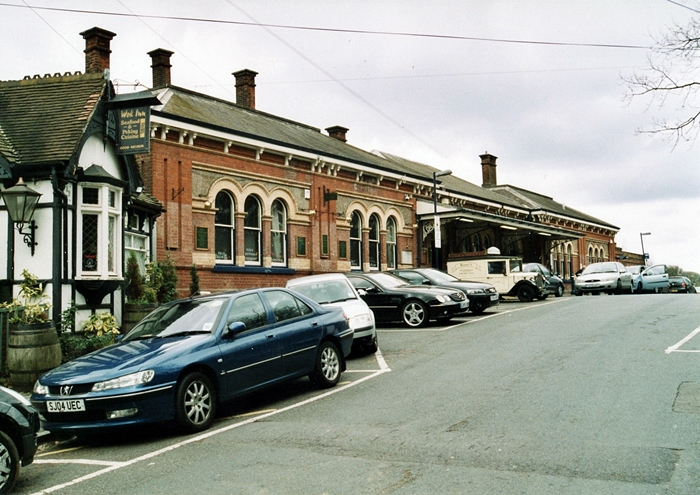 Although the ''up'' side buildings have succumbed, the original ''down'' side SER entrance still survives, in splendid condition. Virtually identical structures once existed down the line at Ashford, but were abolished during Kent Coast Electrification Scheme rebuilding works. © David Glasspool