Kentish steam was virtually eliminated within a period of three years. The Kent Coast Electrification Scheme saw accelerated timetables come into use on both ‘’Chatham’’ and ex-SER main lines on 15th June 1959 and 18th June 1962 respectively. However, beyond this time, pockets of steam haulage remained in West Kent, where the Redhill to Tonbridge and Tunbridge Wells West lines escaped third rail treatment. BR Standard 2-6-4 Tanks were still trundling along these decidedly rural routes in 1964, but it was indeed in this year that a replacement for steam was sought for the Redhill line. By this time, a number of the then relatively new ‘’Hastings’’ six-vehicle DEMUs were already surplus to requirements. Rather than simply deploying the complete units between Tonbridge and Redhill and, naturally, up to Reading, it was instead decided to reform the sets into smaller, more numerous trains. The ‘’6S’’ variant of the Hastings fleet was selected. To re-cap, these units featured vehicles of 58-foot length and were originally ordered as locomotive-hauled stock. This was at a time when locomotive haulage from Charing Cross to Hastings was being pursued. Vehicle lengths were crucial, to ensure an entire train of six carriages, in addition to a diesel locomotive, fitted into platforms 5 and 6 at Charing Cross. When the DEMU option was eventually settled on, later batches of vehicles were built to a greater length of 63-foot 6-inches, platform accommodation for a locomotive no longer being required (these units were designated ‘’6L’’). Unit Nos. 1002, 1003, and 1004 were selected for conversion, and their vehicles separated.

It was decided to use the disbanded ‘’Hastings’’ vehicles in conjunction with a second class of unit, this time the electric 2 EPB sets. On 7th January 1963, dieselisation of the erstwhile electrified Newcastle to South Shields suburban line released fifteen 2-EPB units to the Southern Region. These, like their SR counterparts, were Eastleigh-built, and initially all arrived on the South Eastern Division. In conjunction with the Redhill to Tonbridge dieselisation, 2 EPB unit Nos. 5701, 5704, 5708, 5709, 5710, and 5711 – all formerly on Tyneside – were disbanded. Their Driving Trailer Second vehicles were sourced for re-use with the aforementioned stock of the dispersed ‘’Hastings’’ units. Whilst the main passenger accommodation would be housed within the carriages of the latter, the trailers from EPB units were essentially to become baggage cars. The Tyneside 2-EPB units comprised a spacious luggage area tailor-made to the type of traffic conveyed between Newcastle and South Shields, and this was a feature which their SR counterparts lacked. Despite this, three more seating compartments were gutted to provide more luggage space. Thus, the rolling stock reshuffling exercise produced a ‘’new’’ class of three-vehicle units, six-strong, numbered 1201 to 1206. The units were designated ‘’3R’’, where ‘’R’’ stood for both Redhill and Reading, and they comprised:

Since the EPB trailer was noticeably wider than the pair of ‘’Hastings’’ vehicles in the formation, these units were appropriately nicknamed ‘’Tadpoles’’. The DMBS retained all original power equipment during transition from ‘’Hastings’’ unit to ‘’Tadpole’’. An English Electric 4-Cylinder diesel engine, producing 500 HP at 850 RPM, powered a pair of axle-hung English Electric traction motors. The latter were of the same type used in EPB, CEP, CIG, and VEP electric multiple unit fleets. The class had a top operating speed of 75 MPH and were finished in all-over BR Blue. Allocation of the type was to St Leonards Depot, and the second class-only ''Tadpole'' service between Tonbridge, Redhill, and Reading commenced on 4th January 1965. 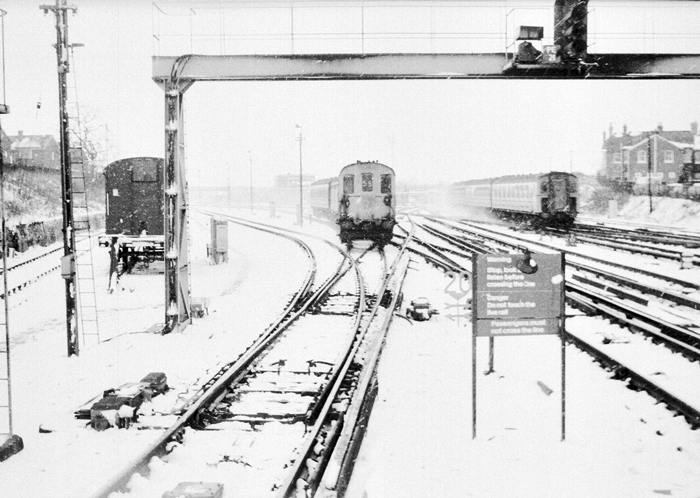 During blizzard conditions Class 206 “Tadpole” No.1205, arriving off the Redhill Line at Tonbridge, is overtaken

by Class 423 4-VEP No.7769 heading a Charing Cross to Ashford service. The stabling sidings on the left were

removed as part of the re-modelling works prior to commencement of Channel Tunnel services, but for some

reason the buffer stop behind the parcels van was not removed and in 2012 it still remains in position. 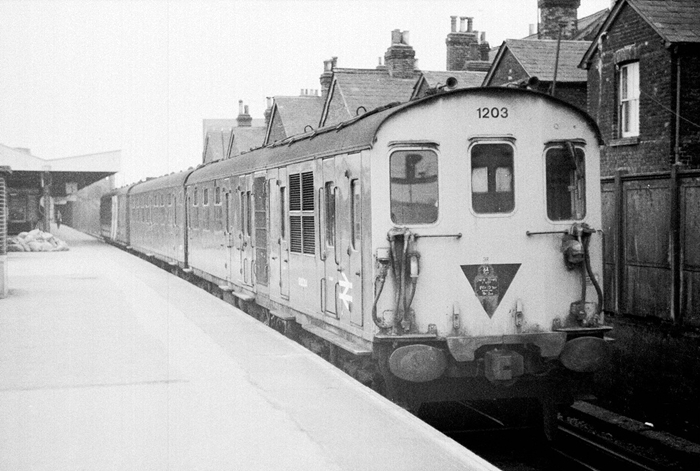 bags has already been thrown onto the platform from the former 2-EPB coach farthest from the camera. At

the services to Redhill and Reading conveyed significant volumes of mail. During particularly busy periods

even the seating bays of the ex 2-EBP coaches were filled almost to the roof with mail bags, the seat 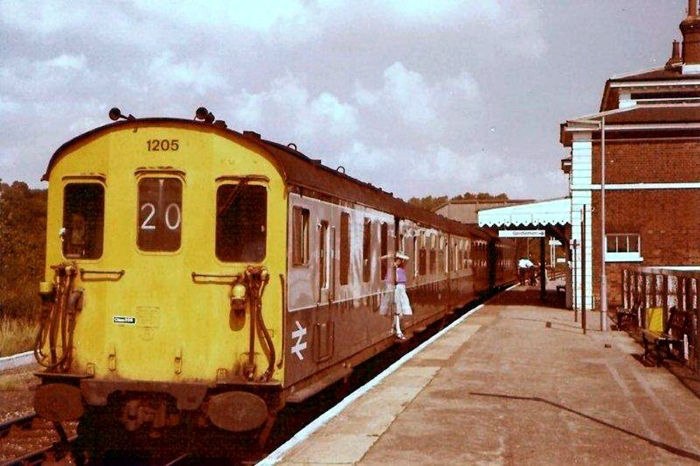 at Rye, with an Ashford to Hastings service. The route between Appledore and Ore had been singled in the

previous year, but a passing loop was retained at Rye. The Late Brian Relf, courtesy of and © Colin Relf