This is a type which has enjoyed only a brief association with the South Eastern Division, the fleet's premature demise having been brought about by a decision to switch mail distribution from rail to road on cost grounds. However, a reversal of Royal Mail's policy, instigated by the opportunity to partner with a freight company offering to operate the fleet at a lower cost than a previous contractor, granted the Class 325 units a reprieve. Unfortunately, however, we are unlikely to see them on Kentish lines again.

In 1993, Royal Mail committed £150,000,000 to the development of a new mail distribution network. This included the opening of a series of rail-served terminals, the commissioning of a main hub at Willesden, and the procurement of new dedicated railway rolling stock for the operation. Rail-borne mail traffic was at this time managed by "Rail Express Systems Limited" (RES), a British Rail business sector which also operated Queen Elizabeth II's Royal Train. Dedicated mail trains had for long been a feature of the railway although, traditionally, much of this traffic was also carried on standard passenger trains. The latter arrangement virtually ceased on the advent of RES in 1991, when a new contract was agreed between British Rail and Royal Mail.

In December 1995, well into the privatisation of BR, a one-third stake in RES was purchased by US-based "Wisconsin Central Railway" for $13,000,000. This company christened itself "English, Welsh & Scottish Railway" (EWS) on this side of the Atlantic and, through its purchase, took over the Royal Mail contract and became owner of the dedicated rolling stock carrying this traffic. By this time, construction of the new train fleet enshrined in Royal Mail's 1993 plan was already over half way through and, unlike the former RES stock, this was to be wholly-owned by the company.

Derby-based ABB Transportation was selected as contractor for the new Royal Mail fleet, which was to comprise sixteen four-car electric multiple units capable of operating from 25kV overhead wires and 750 DC third rail. Derby was the former works of British Rail Engineering Limited (BREL), the division of which ABB purchased in 1994. The then new trains were designed to carry containerised mail, thus were not Travelling Post Offices (TPO), and were a hyrbid of previous BR designs. They were intended to replace the majority of the existing locomotive-hauled mail stock on West Coast and East Coast Main Lines.

The body shells were of steel fabrication, based on the same profile as the 1988-introduced Class 319 "Thameslink" units, and construction of these was subcontracted to "Bombardier Prorail" of Wakefield, West Yorkshire. Traction systems and the running gear was also largely adopted from the earlier Class 319 series, although cab fronts were based on those of the Class 465/466 "Networker" fleet introduced on North Kent suburban routes in 1992. The units were equipped with buckeye couplings and standard buffers, which meant they could not run in multiple with any other unit outside the class. However, this arrangement did make locomotive-haulage of the fleet possible, for which they were fitted with the relevant jumper cables. Each unit was formed as per the below:

The MPMV housed the traction gear and inset to the roof was a pantograph for overhead wire pick-up. The front bogies of each DTPMV were equipped with third rail pick-up shoes for the fleet's foray onto ex-Southern Region territory (more of later). The body sides were equipped with sliding doors and, unlike the existing stock, mail in these units was to be carried in plastic trays rather than traditional mail sacks. The fleet was built with a view to permit future conversion to passenger-carrying trains, should the need arise, and was capable of 100 MPH running.

In 1995, Royal Mail opened the Princess Royal Distribution Centre at Willesden, which became the company's main rail hub and replaced an earlier facility based at Crewe. To operate in conjunction with Willesden, six regional rail hubs were also commissioned at Bristol, Doncaster, Glasgow, Newcastle, Tonbridge, and Warrington. Tonbridge was already the location of a large sorting centre adjacent to the main line between there and Ashford and traditionally, mail by rail traffic had been handled in the BR station's bay platform. The 1993 scheme altered this, whereby the sorting centre acquired a dedicated platform fed by an electrified loop from the main line.

The then new type became "Class 325", numbered 325001 to 325016, and a mock-up of a driving cab became available for inspection at the National Railway Museum. Units were finished in bright red Royal Mail livery and each vehicle carried a large Royal Mail crest centrally-aligned on their body sides. Unfortunately, introduction to service was not as smooth as Royal Mail had hoped for and much struggle ensued with the then recently established "Railtrack". The latter was the organisation set-up by the government in 1994 to take control of British Rail's infrastructure as part of the privatisation process, and it was floated on the London Stock Exchange in May 1996. From the outset, Railtrack began setting out new safety criteria which made it difficult for types which had been ordered under the previous BR regime, but not yet completed, to adhere to. The Class 92 is perhaps one of the more well known examples, this type being barred early on from its intended key routes as a result of new signalling interference legislation laid down by Railtrack, which was impossible for the type to adhere to. As for Royal Mail, it was stated in the Commons in May 1996 that fifteen months had been spent trying to satisfy Railtrack's safety assessment for the Class 325 fleet, but still approval was not granted for the type to run. This culminated in the then Chief Executive of Royal Mail writing to both Railtrack and the Secretary of State for Transport with considerable frustration, demanding that the issue be resolved. This action managed to get the ball rolling for driver training, just a single four-car unit being used on one of the intended routes, but general introduction of the type was not until September 1996.

For those non-electrified routes which carried mail traffic using more traditional rolling stock, EWS procured a fleet of thirty diesel electrics capable of 125 MPH running. The Royal Mail diagrams were reportedly the toughest on the National Rail network, requiring trains to arrive and depart within very small time windows. The new fleet, which became the "Class 67", was to provide EWS with the required level of reliability to adhere to the tight schedules but, like the comparatively new Class 325 units, their tenure in this role was to be somewhat short-lived.

Royal Mail publicly announced on 6th June 2003 that the carriage of mail by rail would cease in March of the following year. The operation, which involved 49 trains daily, was to be transferred to a road-based network, with some of the longer-distance traffic being handled by aircraft. The decision had come about by a failure of agreement on a revised contract between the company and the then freight operator, EWS. It was stated by Royal Mail that EWS was unable to offer the range of train services required at a price which was agreeable. The original RES contract, which EWS had assumed in 1995, was supposed to run through to 2010. The last Travelling Post Offices ran on the night of 9th January 2004.

What now for the Class 325 fleet? Although their construction invited the potential to be converted into passenger stock, subsequent safety legislation would have no doubt made this prohibitively expensive, the cheaper alternative for any interested party being to have brand new trains built. That was coupled to the fact that the units were not owned by a rolling stock leasing company, but instead were Royal Mail assets. However, all was not lost and soon after the running of what was thought to be the last mail train, a new opportunity emerged on the horizon.

EWS had largely monopolised rail goods traffic since BR privatisation, buying out most of the former shadow freight operations, bar "Freightliner". However, new players have since broken onto the scene, one of these being "Great Britain Railfreight" (GBRf), which ran its first operations as early as 1999. In April 2004, it emerged that Royal Mail was in talks with GBRf (by this time owned by "FirstGroup") about the possibility of resuming a number of mail trains, albeit not on the previous scale. On 1st December 2004, it was announced that GBRf had been awarded a four month contract to operate Royal Mail's Class 325 fleet, in time for the Christmas period. At the end of the contract period in March, Royal Mail was to review the performance of the rail operation with an intention to extend its agreement with GBRf. Sadly, as far as Kent interest went, Tonbridge would not see rail traffic under the new regime, the services being limited to the West Coast Main Line, running between the main hub at Willesden and Shieldmuir (near Glasgow) via Warrington.

Evidently, the revived operation ran smoothly, for in May 2005 Royal Mail signed a new contract with GBRf for the running of two trains each night between Willesden and Shieldmuir. That was originally to last until March of the following year, but subsequent extensions thereafter took the contract up until 2010, although still limited to the two nightly trains compared to the forty-nine which ran prior to 2004. Then, on 1st June 2010, the Royal Mail contract was awarded to EWS' successor, DB Schenker, this time for the running of seven mail trains on the West Coast Main Line, with scope to increase this number should demand be sufficient. This was renewed on 1st June 2015, DB Schenker being contracted to run six daily services on the West Coast Main Line and two on the East Coast Main Line.

During the various exchanges of contracts, there have also been fleet changes. Naturally, since the original operation ceased in early 2004, there has never been the demand for all units to be in service. Therefore, when repairs became due, these could not be justified and rather, cannibalisation was the order of the day. Unfortunately, this fate befell No. 325010, which was last used as part of the EWS contract, subsequently being stored and raided as a source of spares to keep other units going. It had an uneconomically short working life of just over seven years, its redundant shell being sent for scrap in March 2012. The motor coach was salvaged for use in unit No. 325009, the original traction equipment of the latter being in need of major repair. Other members of the class also had traction gear requiring attention; for a time, this saw certain units reduced to three cars on removal of the motor vehicle, these powerless formations being locomotive-hauled. 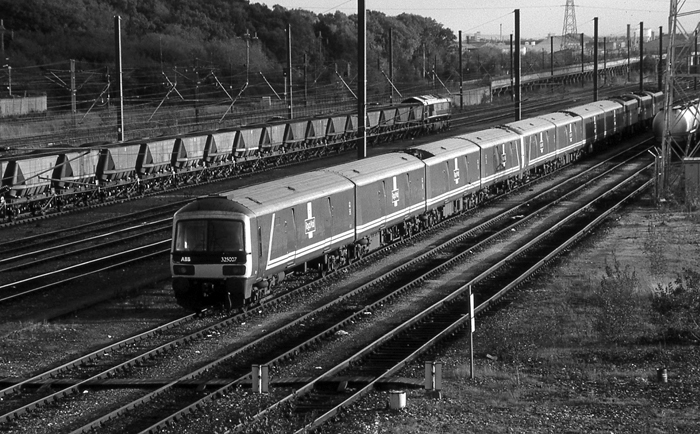 No. 325007, showing manufacturer's "ABB" logo, is seen stabled under the wires at Tyne Yard, Gateshead, with classmate No. 325016 coupled behind. Note the sliding doors, inset pantograph, and Networker-style cab. © David Glasspool Collection 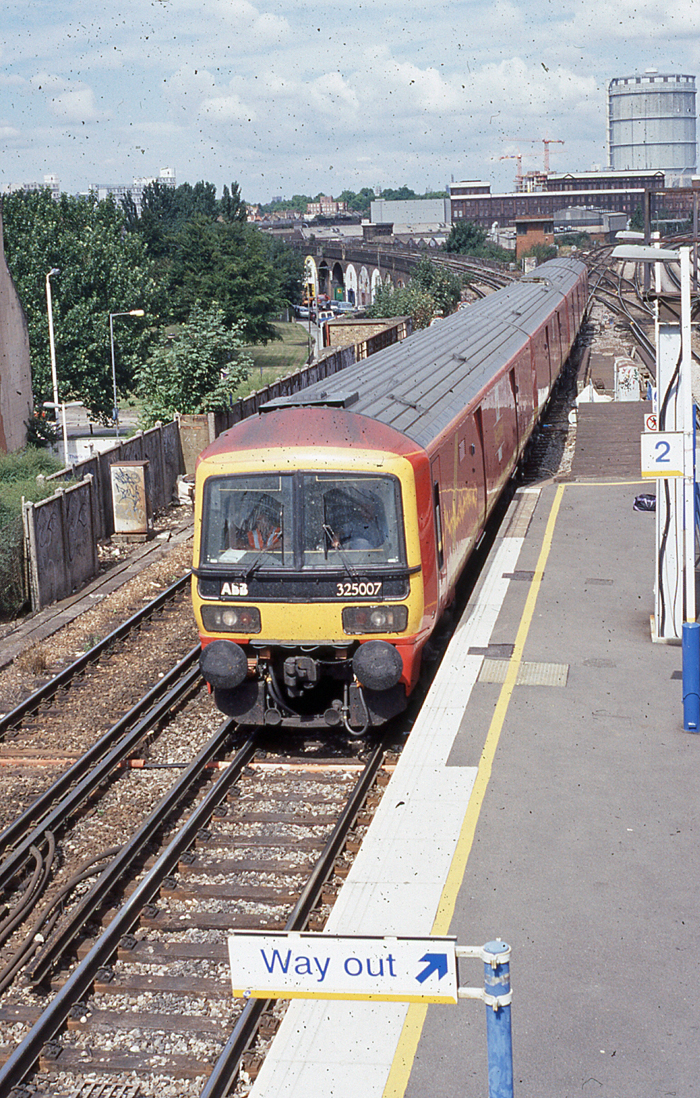 We see No. 325007 once again, but this time down south on a Tonbridge diagram. Having just come off the connecting line between Clapham Junction and Factory Junction, the unit is seen entering Wandsworth Road. © David Glasspool Collection