The ‘’London Overground’’ brand first emerged in February 2004 and was promoted as the ‘’surface’’ equivalent of the Underground system. The intention was to bring a number of inner suburban railway routes under the control of Transport for London, to replace the existing franchise operating the lines and develop an integrated orbital rail service around the capital. The ‘’London Overground’’ (LO) brand was officially launched on 5th September 2006, and the following routes were targeted:

Services on these lines were formally taken over by TfL on 11th November 2007 – the ‘’Silverlink Metro’’ franchise, which had up until now run the trains, had come to an end in the early hours of that morning. The new TfL arrangement aimed to add an extended East London Line to the above list, which would see trains from Dalston Junction go as far south as Croydon. Furthermore, the entire LO network was to witness a rolling stock transformation: new diesel multiple units were earmarked for Gospel Oak to Barking services, whilst the electrified lines would receive a new wave of electric multiple units. TfL set the ball rolling in August 2006, when it entered into a contract with train builder ‘’Bombardier’’ for the construction of no less than forty-four new electric multiple units. Assembly would take place at Derby Litchurch Lane, and TfL’s order had come with impeccable timing: Bombardier had faced the prospect of scaling back its production lines through lack of orders for new trains. Totalling 152 vehicles at some £223 million, twenty-four units were to be built as dual-voltage three-car sets, and twenty were to be designated D.C. only. The latter would be strengthened with a fourth trailer, requiring lengthening of platforms along the North London Line, and this in turn led to a follow-on order for an additional 24 vehicles. The extra carriages, formally designated ‘’Motor Open Standard’’ (MOS), were destined for the aforementioned three-vehicle units, which were to be augmented in 2011. In review, the orders stood as follows:

With reference to Batch 4, these units were scheduled for a 2011 delivery, to meet forecasted traffic growth on LO routes.

Bombardier had earlier built thirty-six 5-car EMUs for the Kent commuter lines, originally ordered through the ‘’Connex South Eastern’’ franchise. Eventually to become the Class 376, the first examples of this type were delivered in May 2004, and it was indeed this breed of unit which formed the basis for LO’s new rolling stock. The latter have become Class 378, and although this variant shares a virtually identical aluminium body shell to its Class 376 sister, the differences between the two types are in fact numerous. Externally, design alterations begin with the cab front. As inner suburban stock, there is a lack of end gangway connections on both designs, which prevents passage between two coupled units. However, where the Class 376 features a three-piece windscreen, the opportunity was taken to instead incorporate an emergency door into the Class 378 cab front. This met safety criteria concerning train breakdown in tunnels, whereby passengers would be able to escape from the units at their very ends, should side exit not be possible. Readers may be aware that this type of situation was a major bugbear of Class 395 ‘’Javelin’’ operation through the unusually slim bores of Shakespeare Tunnel. The streamlined nature of the high-speed units precluded the installation of end gangways, which required tunnel modifications to meet safety standards and allow operation through to Dover. Passengers may be relieved to know that in the unlikely event of their driver falling unconscious in such a scenario, the Class 378 emergency end doors can be operated by the travelling public. On activation of the emergency door, a spotlight – affixed to the cab front – illuminates the tunnel. The spotlight sits in the company of a pair of filament headlamps and two LED taillights.

The motor carriages are each equipped with three traction motors, supplied by Bombardier’s Swedish branch. These, combined with the gearing ratio, gives the Class 378 fleet a top speed of 75 MPH, and a swift acceleration suitable for the frequent stop-start service patterns the units will be deployed on. Again, the top speed statistic is shared with that of the Class 376, although the latter features one less traction motor per power vehicle, which in turn provides a slightly slower rate of acceleration. Both classes, however, feature regenerative braking. As mentioned in the Class 465/466 ‘’Networker’’ section, this form of braking involves reversing the direction of the electric motors to slow the train down, which allows wasted electrical power to be returned to the National Grid. The regenerative braking capability is controlled through the use of Global Positioning Satellites, and this same system is also used to automatically work the Class 378 units’ selective door opening (SDO), whereby sets of doors are prevented from opening where platforms are too short. Interior equipment also comprises a trio of radio communication systems:

·        Cab Secure Radio (CSR): This analogue radio system allows train driver and signaller to speak to each other concerning safety critical information, over a secure channel. CSR is used mostly, but not exclusively, on driver-only-operated (DOO) units.

·        National Radio Network (NRN): This is a second, albeit more insecure, analogue radio system which allows a train driver to access the ‘’Railway Telephone Network’’. The latter is an in-house telephone network linking all major departments of the railway system, from individual trains and local offices, to regional and national headquarters.

·        Global System for Mobile Communications – Railways (GSM-R): This will eventually become the standard system of radio communication, and replace the earlier CSR and NRN. It is a new, more secure system for communication between train and signalling centre, and features improved transmission quality and cheaper, more efficient operation.

Externally, the Class 378 has the appearance and dimensions of a standard National Rail electric multiple unit, but inside, the design is very much geared to that of a London Underground train. During the earlier Class 376 design phase, it was decided to incorporate large standing areas at the expense of seats, allowing units to physically accommodate more passengers during peak periods. The Class 378 design team have gone one better, and there is a total absence of seating along the middle portion of the trains. Instead, Tube-style longitudinal seating, lining both sides of carriages, has been installed, creating a wide thoroughfare and large vestibule areas. The ‘’Underground’’ feel is augmented by the presence of grab rails and straps, but unlike those units which traverse the capital’s tunnels, the Class 378 units are fitted with air-conditioning. There are particularly wide gangways between individual carriages, with no doors separating each vehicle’s seating area, which allows one to see from one end of the unit to the other. It is hoped that this design feature will help tackle anti-social behaviour – indeed, each carriage is equipped with four security cameras.

This first three-vehicle unit was formally unveiled at Litchurch Lane works on 16th September 2008. By 4th June of the following year, four units had been delivered to Willesden Depot: Nos. 378001, 378005, 378007, and 378015. On 13th July 2009, the Class 378 was officially launched at Willesden Junction by the Mayor of London, Boris Johnson. It is intended for the fleet of new units to wholly replace the existing Class 313 stock on LO routes by May 2010. Of the latter, it is proposed to cascade up to twenty units down to the Portsmouth – Brighton – Hastings route. 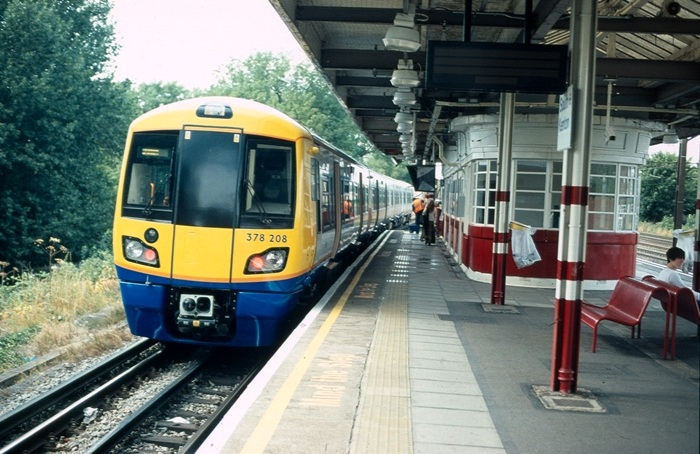 No. 378208 is seen departing northbound from South Kenton, in-between Wembley and Harrow & Wealdstone. Unlike its Class 376 counterpart, the Class 378 has an all-yellow cab surround and lacks a third centrally-positioned window. © David Glasspool Collection 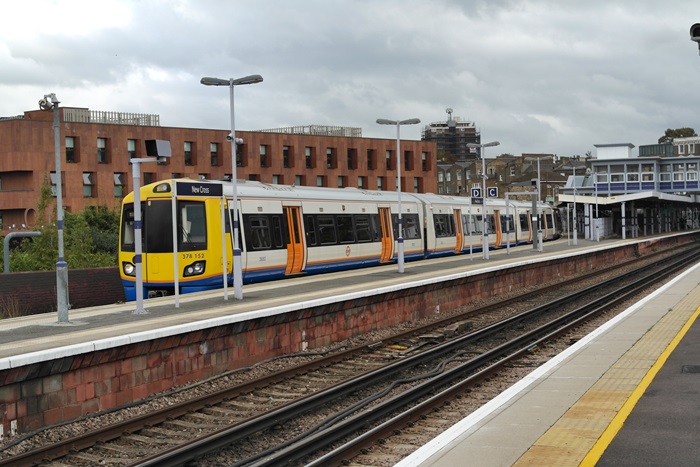 No. 378152 is seen at New Cross shortly before departure to Dalston Junction. On the far right can be seen the station's new footbridge, complete with lifts, at an advanced stage of construction. © David Glasspool