This was a class designation which covered quite a range of varied stock formations. Up until the outbreak of World War II, Southern Railway suburban electric rolling stock was generally flat-sided, and the largest carriage compartments accommodated a maximum of ten passengers, sitting in two rows of five across. Much of this had been converted from ex-steam stock, and subsequent new builds were also constructed to these profiles. In 1939, the company decided to address overcrowding and the ever-increasing peak-time traffic on its London suburban network, which had been instigated by electrification. The SR’s Annual Meeting in February of that year brought to light the possibility of seating no less than six passengers in a row, thus twelve to each compartment. To accomplish this, the profile of the carriages would be to a design which later became famous on the rolling stock produced by O.V.S. Bulleid: curved steel sides, welded into place, could produce additional width above underframe level, whilst remaining within the required loading gauge. In the following year, a prototype carriage based on these parameters was completed at Eastleigh Works. The SR’s Chairman visited the Hampshire complex to experience first-hand the six-across seating arrangement in the vehicle, and was favourably impressed. By September 1941, a complete four-vehicle set was available for service, comprising 456 seats, 60 of them First Class. The formation was equipped with four English Electric motors, each generating 275 HP, and these were split between the two driving vehicles. English Electric was the SR’s exclusive supplier of traction equipment, the two parties having signed a ten-year agreement in 1936. The unit was fitted with an air braking system supplied by contractor Westinghouse Brake & Signal Company Ltd, and the control gear was wired for the electro-pneumatic system. Finally, the formation was numbered 4101 and designated 4 SUB – i.e. four vehicles Suburban. From the outset, the prototype 4 SUB worked exclusively on the South Eastern Division, being confined to the Victoria to Orpington route. As mentioned at the beginning of this section, the ‘’4 SUB’’ term did not refer to a specific type of unit, but rather, was a general description for all those suburban formations which consisted of four vehicles.

On 6th October 1941, all SR suburban services became third class only, and World War II also ensured that a heavily reduced service was operating on the network. On the plus side, the SR now had no shortage of stock, with surplus units being stored out of use during the skeleton timetable. However, the Board concluded that the capacity of those three-vehicle units which were deployed should be enhanced by the addition of a fourth vehicle. This extensive stock reformation programme was begun in 1942, with eighty-one ex-LSWR 1201 series units being dispatched to Eastleigh for the insertion of a compartment trailer. This produced a batch of forty-one units with a total seating capacity of 353, and a second group of forty units accommodating 350 seats, numbered in the series 4131 to 4171 and 4195 to 4234 respectively.

In 1944, a second newly-built four-vehicle suburban unit, externally and mechanically identical to No. 4101, emerged from Eastleigh. Numbered 4102, this unit comprised just Third Class accommodation, in light of the 1941 decision, which gave a total of 468 seats. In January of the following year, a short production line of identical four-vehicle units began, and by April, eight had been produced, these being numbered in the 4103 to 4110 series. A note should be made that all new-build 4 SUB formations considered so far were built with dome-shaped cab fronts, complete with a pair of the distinctive square cab windows associated with pre-1939 SR electric stock. After completion of the latest new batch, attention was again turned to bolstering existing three-coach stock with an additional trailer. By the end of 1945, Eastleigh Works had converted twenty-six ex-LSWR 1285 Class units to four vehicle formations. Indeed, with World War II now over, normal service could now be resumed, thus the surplus stock situation no longer presented itself. Furthermore, air raids had seen over fifty SR suburban EMU vehicles destroyed. Therefore, the strengthening of the 1285 Series units differed from previous exercises; rather than receiving redundant trailers from disbanded units, Eastleigh works produced new trailers. These were built to the wider curved profile used in 4101 to 4110 series, thus comprised ten twelve-seat compartments. Consequently, the inserted vehicles immediately stood out as an afterthought, their curved profile being distinctly wider than the flat sides of earlier trailers. Twenty-nine 1496 Class units were similarly treated, and were numbered in the 4326 to 4354 range, the final examples emerging from Eastleigh in 1946. 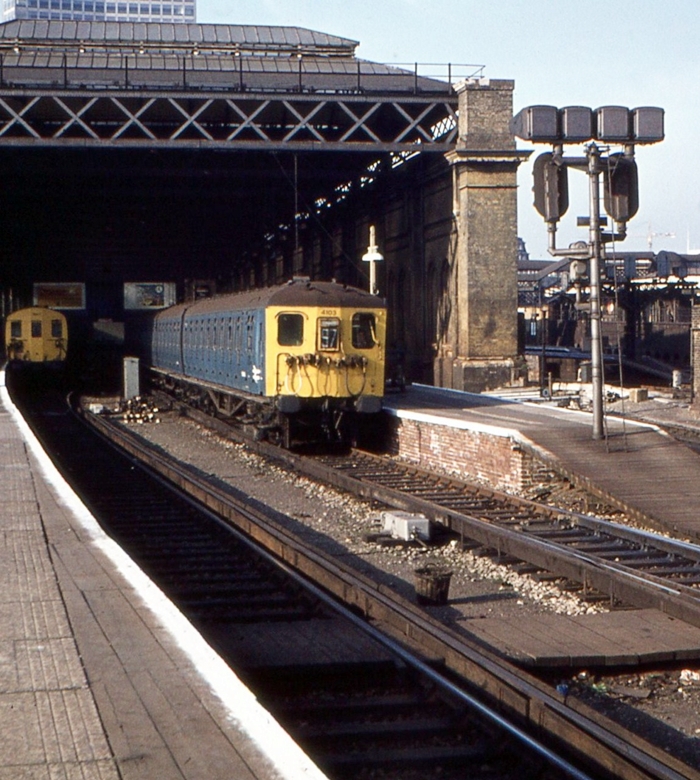 One of the ''First Series'' 4 SUB units with dome-shaped cab, No. 4103 is seen departing London Bridge ''Low Level''. Note, on the right, the covered lattice footbridge of the ''High Level'' station. © Roger Goodrum 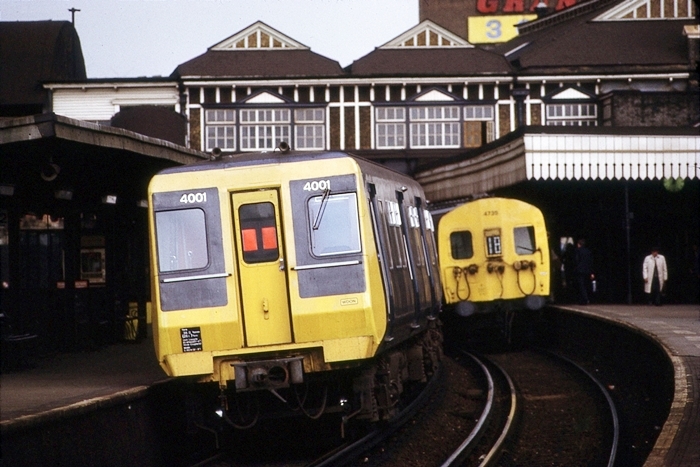 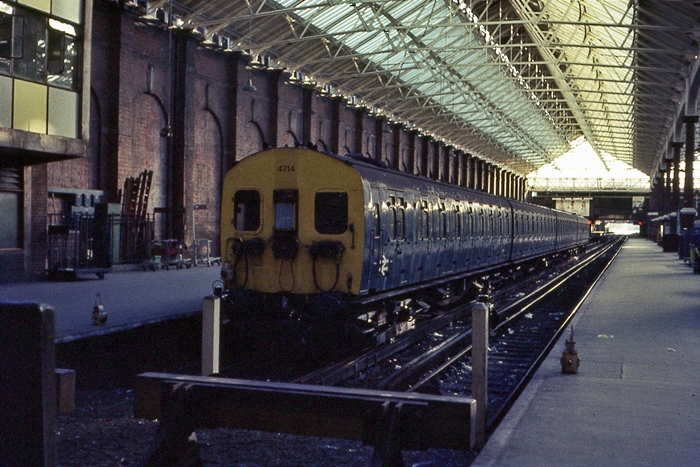 No. 4714 is seen at the buffer stops at Victoria, under the ''Brighton'' trainshed of 1908, prior to this area having a shopping centre built over the top. In the background is Ecclestone Bridge, beyond which the trainshed continued. © David Glasspool Collection 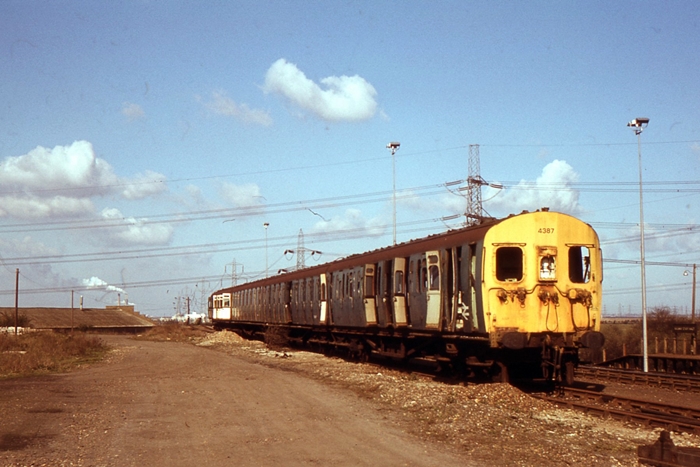 No. 4387 is seen in the ''up'' yard at Hoo Junction, awaiting scrapping. This unit still appeared on the active stock list in 1975, but no longer featured by 1978, which at least helps to roughly date this photograph. Notice on the far right the Staff Halt, which still possessed an old-style name board at this time. © Roger Goodrum