In 1979, the Southern Region’s South Western Division became host to the Class 508 four-vehicle EMU fleet, which were ultimately destined for the 1977-completed Merseyrail underground system. These could solve a temporary stock shortage on the Southern lines until the first Class 455 units were delivered. This allowed for the accelerated withdrawal of the 4 SUB fleet, which were wired for 660V D.C. operation. With all 4 SUB units withdrawn, the entire third rail network could be upgraded to 750V D.C. Such work had been hitherto done in stages, as a result of 660V-wired units still being in use. 1983 marked the first year of Class 455 operation on SW Division suburban services out of Waterloo, which permitted Class 508s to be released to Merseyrail. Over the subsequent five years, it became clear that numerous services diagrammed for single unit operation provided inadequate passenger accommodation. Conversely, however, proposals had come to light outlining the reduction of several eight-vehicle formations to six vehicles, where it was deemed that too much passenger accommodation was available. A balance needed to be struck: where four vehicles were too few for a service, eight vehicles were seen as too many. Thus, the solution devised by Network SouthEast in 1988 was to have a new fleet of two-vehicle EMUs, which could work in multiple with the existing Class 455 stock. This would permit six-vehicle formations to be run, increasing capacity on overcrowded suburban diagrams, but also removing wasted space on those services which were not intensive enough to warrant eight-vehicle trains.

In 1989, BREL York was awarded the contract for the construction of twenty-four EMUs of two-vehicle formation. Later to become ‘’Class 456’’, like their marginally older Class 319 sisters, the type was based around the BR Mk 3 coach profile, complete with automatic sliding doors. Interestingly, Classes 455 and 456 were designed with cab-front coupling pipes when working in multiple with each other. This is somewhat of a peculiarity since sister units, Classes 313/317/318/319 and 320, lack these, but are still able to work in multiple without them. Pipe connecting adapters were also created to allow the Class 455/456 to work in multiple with BR Mk 1 slam-door stock, such only being required in an emergency. With a top speed of 75 MPH and accommodation for 152 Standard Class seats, the first examples of the SW Division’s then new two-vehicle 500 HP Class 456 fleet were to be ready for the beginning of 1991. A major complaint after the introduction of the Class 455 fleet in 1983 was the fact that the units lacked toilets. Thus, such facilities were incorporated into the Class 456 design.

In the meantime, Network SouthEast had a tactical change of heart. The Business Sector had instigated a network-wide policy of replacing Mk 1 slam-door stock as soon as possible, particularly on suburban diagrams. Government purse strings were tight, and although money was eventually secured for the ‘’Networker’’ project on the South Eastern Division, acquiring further funds for Central Division rolling stock renewal was not easy. Indeed, the Class 319/2 order of twenty-six units in 1989 was only secured by NSE masquerading the stock acquisition as an improvement of the ‘’Thameslink’’ service, when in fact it formed part of a cascading exercise to get newer units onto Central Division suburban lines. Consequently, as Class 456 production began, it became clear that the Central Division’s stock renewal need was greater than that of the South Western’s. The decision was taken to divert all twenty-four Class 456 units to the former. This allowed the accelerated withdrawal of 2-HAP units to occur, and for the transfer of the majority of remaining 2EPB units to Slade Green, on the South Eastern Division, where they would eventually be replaced by the Class 465/466 ‘’Networker’’ fleet. On the Central Division, the Class 456 units would be able to work in multiple with the area’s allocation of Class 455s, in addition to operating in solo. Unfortunately for SW Division passengers, toilet facilities on Class 455-diagrammed suburban runs did not materialise! 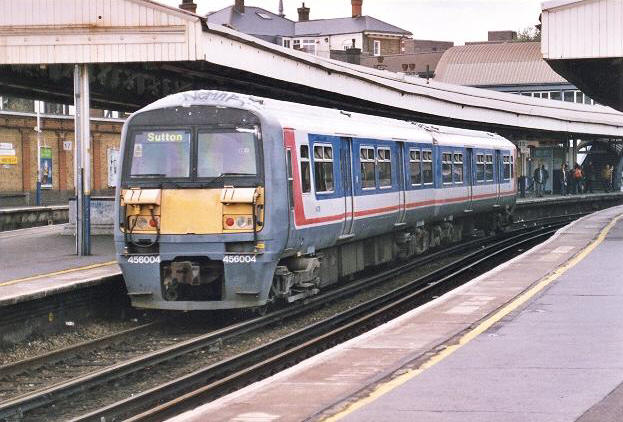 Victoria to Sutton service, complete with its faded Network SouthEast scheme of 1990. Similarities in

appearance can be drawn between the fleet and that of the Class 319. David Glasspool 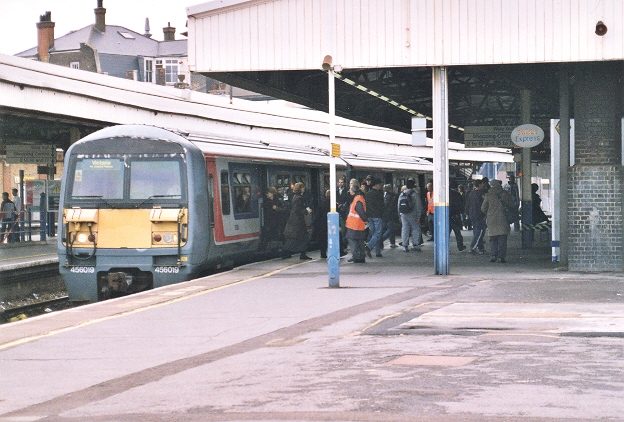 Also seen at Clapham Junction on the same day as the previous view was No. 456019, on this

occasion having arrived with a Sutton to London Victoria via Crystal Palace service. All units

except No. 465024 still wore their original colours at this time. David Glasspool 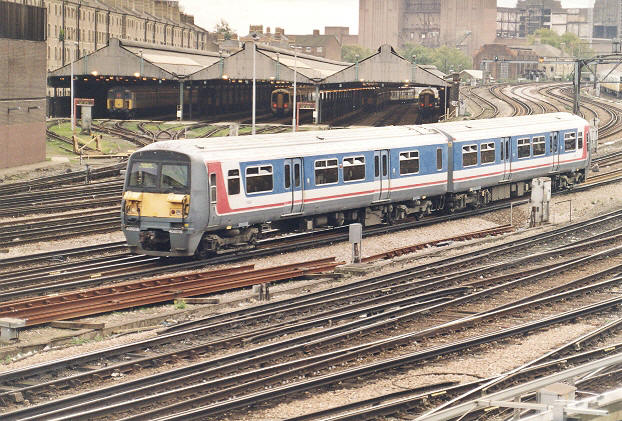 With the nine-track carriage shed in the background, No. 456018 is seen on the Victoria approaches