The Class 58 derives from a need for the provision of extra motive power to cope with the 1970s-projected increase in coal traffic. It was envisaged that this increase would be substantial, to the extent that BR decreed the existing freight-hauling diesel fleet on offer was insufficient in numbers to deal with it. This was despite the recent introduction of the Class 56s which had been built for handling coal loads; the type had, however, experienced major reliability issues since their deployment and with huge potential income gains from greater traffic, the procurement of a new locomotive began, Doncaster at the forefront of the design and construction.

The design was well though out: the large removable side panels gave accessibility to major components to a degree only ever before seen in the Class 20 of the 1955 Modernisation Plan, thus internal walkways were not required (and could not be physically incorporated). Its basic construction was simple, making use of interchangeable modular sections based upon a straightforward underframe, allowing it to be built more cheaply than the Class 56: it would also be considerably less expensive to maintain. In its export role, the locomotive had the potential to be single-cabbed, as per its operators requirements, or even AC electric, owning to the ease of exchanging components. The traction equipment incorporated was that featured in the Class 43 and 56, and the engine was almost identical to that in the Class 37, but boasted nearly twice the output (the type would also have equivalent power to the Class 56s, but be firing from fewer engine cylinders). The contract for the construction of thirty-five of these locomotives was naturally awarded to BREL at Doncaster and building of the first examples began in 1979, after which time BR placed a second order for the production of a further fifteen of the type, bringing the order total to fifty. The first locomotives of the batch were ready for testing in 1983, by which time sectorisation had taken place and all builds were bound for Railfreight. Thorough acceptance testing ensued throughout 1984 and by early 1987, every Class 58 had been delivered.

The class soon hit trouble as a result of the 1984/1985 coal miners' strike: the traffic they had been built for was now severely lacking and with closures of mines to follow thereafter, their intended merry-go-round work from the pits to the power stations was vanishing quickly. Their early misfortunes were further added to with the rising American locomotive export market, which saw Class 59s land on British soil from 1986 onwards. These had unprecedented reliability (a figure of 95% having been specified by Foster Yeoman at the order stage) and tremendous pulling power, which sadly killed off the possibility of the hoped-for Class 58 export orders.

Despite the decline in coal traffic, all fifty Class 58s were allocated to the TrainLoad Coal sector after further divisions within Railfreight were made in October 1987, and allocation of the fleet remained at Toton. Subsequently, in 1994, the whole class came under the shadow franchise ''Mainline Freight'' in the run-up to privatisation.

Now looking at the type's South Eastern Division interest. The Toton-based Class 58 locomotives were regularly diagrammed on MGR coal trains to Northfleet BCI almost from new. However, as these trains (2-3 per day) operated mainly at night with LMR crews, they were not often noticed or photographed. Following the decision to train Hither Green drivers on Class 58s, various members of the class were out-based from Toton for crew training and gauge clearance tests during the early months of 1994, and it is believed that regular use on local services in North Kent commenced from the May 1994 timetable change. Such workings included coal trains to Ridham Dock, for Bowaters Paper Mill, and Sheerness Steel diagrams. Trains which once required double-heading Class 33s could now be hauled single-handedly by a Class 58.

By the mid-1990s the Class 58s had become the most reliable diesel fleet, and although then new freight operator English Welsh & Scottish initially took interest in perpetuating with the type, the orders and subsequent influx of Class 66 locomotives from 1998 onwards proved that in their current function, they were doomed. Withdrawals of the type began in earnest as locomotives became due for expensive overhauls, and remaining active examples were subsequently transferred to the South Eastern and South Western Divisions as new Class 66s arrived at Toton. By this time their freight-hauling scope had been broadened and workings such as aggregate and oil were as frequent for the class as diagrammed coal workings. For a time Hither Green appeared to be the depot of old second-hand types: Class 33s were still in evidence (at least until the end of December 1998), displaced Class 31s, 37s and 58s arrived on the scene, not to mention the Class 08/09 shunters and native Class 73 Electro-Diesels with a strong presence - in short, very interesting times. Class 59s were acquired by EWS from National Power on 1st April 1998 and with greater numbers of Class 66s arriving, the Class 58 soon became a small non-standard class, not cost-effective to keep going. Hither Green had received its first ''official'' Class 58 allocations in October 2000. Compared to their American / Canadian counterparts, their pulling power was somewhat deficient as a result of poor mechanical grip and by 2002, all had been withdrawn from the South Eastern, the last working examples being those based at Eastleigh.

With thanks to David Morgan for notes on South Eastern Division workings. 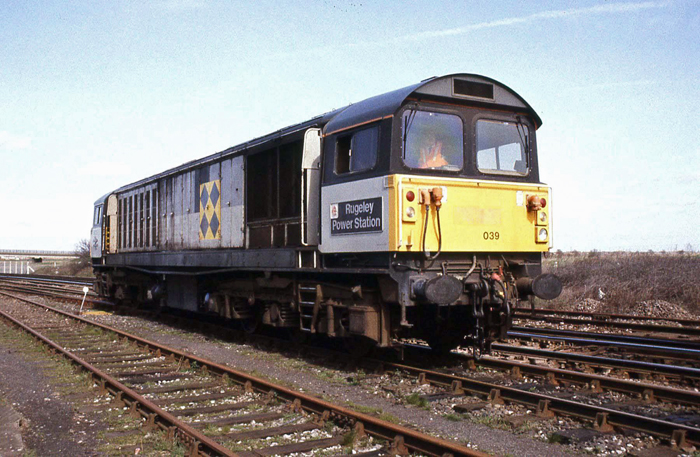 The first Class 58 on the Isle of Sheppey, No. 58039 "Rugeley Power Station" - wearing Trainload Coal livery - is seen in Queenborough Yard whilst on a gauging trial prior to the wider use of the class on the South Eastern Division from the May 1994 timetable change. The loco was built at Doncaster Works in 1986 and eventually became the property of "EWS" following privatisation of the BR freight companies. However, with the introduction of Class 66 locomotives and a reduction in traffic, the loco became surplus to requirements and was taken out of service at the end of 1999. Remarkably in 2003, the loco was restored to operational condition and shipped to the Netherlands, where it was hired to "Afzet Container Transport Systeem" (ACTS) for use hauling container services, operating as ACTS No. 5811. Following completion of the hire contract in 2009, rather than returning to the UK, the loco was transferred to Alizay Depot near Rouen, France, where it still remains stored in 2016. © David Morgan 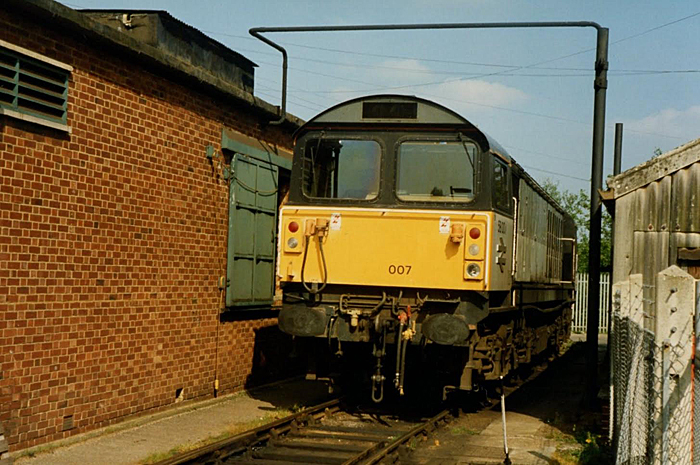 No. 58007 is seen at Hither Green Depot wearing two-tone grey livery. It was in the year of this photograph that the type had been introduced on coal trains to Ridham Dock, for Bowaters Paper Mill, and Sheerness Steel diagrams. To the left is the old sand plant, the contents of which was used to fill locomotives' sand boxes by means of a purpose-built hand scoop. © Roger Goodrum 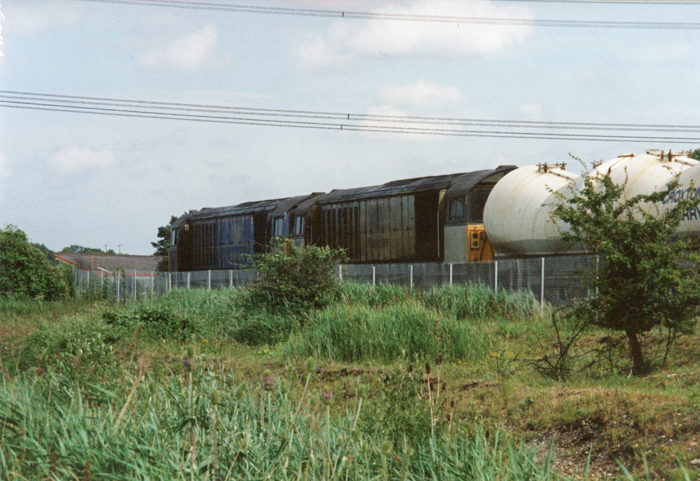 A double-header working: No. 58032 in ''Mainline'' blue livery is seen piloting another Class 58 wearing the grey derivative of the scheme. The pair are in the vicinity of Hoo Junction as they haul a rake of Croxton Garry chemical tankers. Calcium carbonate was a typical commodity carried under the ''Croxton Garry'' name. No. 58032 was subsequently redeployed in France. © Mike Glasspool 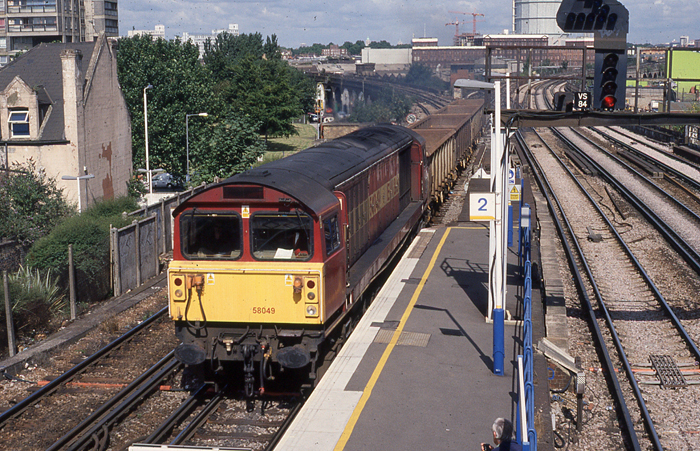 Having just come off Factory Junction, No. 58049 "LITTLETON COLLIERY" is seen heading south through Wandsworth Road. The locomotive was susbequently redeployed in France in November 2004 with "Travaux du Sud-Ouest" ("Work of the South West"), for use on ballast trains during construction of the LGV EST high-speed line. © David Glasspool Collection