This was one of no less than twelve level crossings that were a feature of the K&ESR between Robertsbridge and Headcorn Junction. The ‘’Rother Valley (Light) Railway’’, as it was initially known, was the first railway in the country to take advantage of the ‘’Light Railways Act’’ of 1896. This permitted a number of economies to be taken during the construction of the line, and this included minimal provision of infrastructure at stations and level crossings. As a result, right up until its closure to through running passenger services in 1954, the K&ESR boasted a few level crossings that lacked both gates and keepers. Thus, trains would proceed, naturally sounding a warning ‘’whistle’’, and the locomotive driver would literally hope for the best!

Cranbrook Road Crossing is located half a mile west of Tenterden Town, and all infrastructure seen at the site today is from the post-preservation era. All level crossing gates on the K&ESR have either been built from scratch, or salvaged from elsewhere and brought to the line, the original gates having been removed by British Rail. Cranbrook Road Crossing was rebuilt during January 2003, outside of operating season, to provide a new crossing keeper’s hut. Hitherto, a diminutive pitched-roof hut of tongue-and-groove timber construction was positioned immediately east of the crossing gates, on the northern side of the single track. This was subsequently replaced by an equally small structure, although the latter was of corrugated metal construction, and positioned to the west of the crossing gates, south of the single-track. The crossing keeper’s hut here has a direct telephone line with the signal boxes at Tenterden Town and Rolvenden stations. Operational safety regulations in force along the line require that all trains have to make a stop at each of the six level crossings that still exist on the preserved route between Tenterden and Bodiam inclusive. This requirement is relaxed at Cranbrook Road and Tenterden Town Crossings for services ascending the steep 1 in 50 gradient in-between the two locations, but only if a crossing keeper is on duty. Such trains are limited to a top speed of 10 MPH over the level crossing at the former. 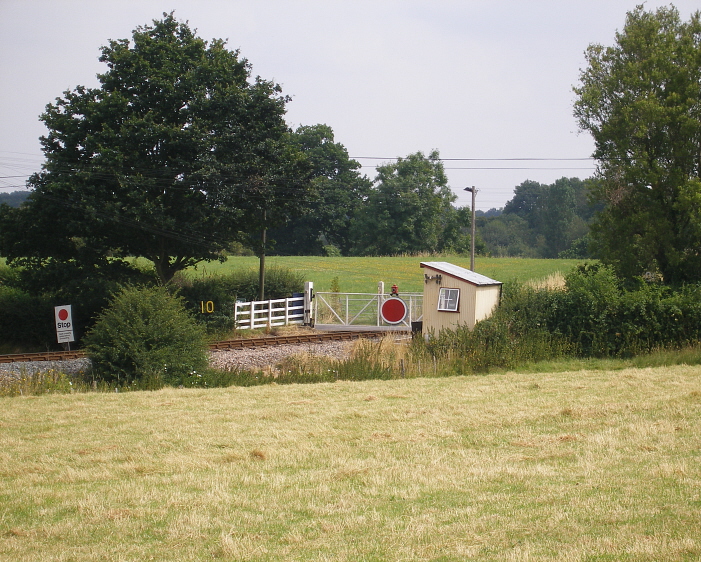 The open window of the hut indicates that a crossing keeper was on duty on this day. The telephone wire attachment can be seen above the window, to the left. This corrugated hut has replaced a timber structure which resided on the opposite side of the crossing. © David Glasspool