In an issue of The Railway Gazette dated 14th September 1945, the following was reported:

At Crayford, S.R. ..... a double-line chord connection was brought into use on October 11th, 1942, between the Dartford Loop Line and the North Kent Line.

Merely 630-yards-long and known as the "Crayford Spur", the electrified connecting line was commissioned by the Southern Railway (SR) to provide direct rail access to Woolwich from the London direction via Sidcup, avoiding a reversing manoeuvre at Dartford. Woolwich was strategic, for the Royal Arsenal there had scaled up the manufacture of munitions since the declaration of war in 1939. This had followed a period of decline for the site post World War I, during which it had faced a proposal of complete closure. The Arsenal's importance was nevertheless reduced compared to the World War I period, given that munitions manufacture was now spread across the country.

On the North Kent Line, the chord diverged at "Crayford Spur A Junction", which was situated a mile south of Slade Green station, Dartford station being 1,390-yards to the east. On the Dartford Loop Line via Sidcup, the junction was named "Crayford Spur B", residing 1,600-yards west of Dartford station. At both junctions, sturdy square signal boxes of brick construction were commissioned.

The Crayford spur was retained post-1945. It became a useful route for empty stock movements between the Dartford Loop Line and Slade Green Depot. Notably, the spur developed into a core route for freight flows to and from Angerstein Wharf. The latter was a single-track branch which linked a plethora of commercial sidings on the Thames' south bank with the North Kent Line, a junction between the two existing 380-yards west of Charlton station.

The signal boxes at Crayford Spur "A" and "B" Junctions were taken out of use on 1st November 1970, when semaphore signals were replaced by colour aspect lights controlled from the Dartford Panel. Stanham Farm Level Crossing, which was 200-yards east of "B" Junction and intersected by four tracks, was closed by Railtrack in about 1999. The site thereafter became a restricted access entry point to the line for the permanent way gang.

As far as your author can recall, the use of the Crayford Spur for regular scheduled passenger services only occurred post-2000. These have mainly been in the form of the Cannon Street circular trains, travelling via Greenwich, Woolwich, and Sidcup. 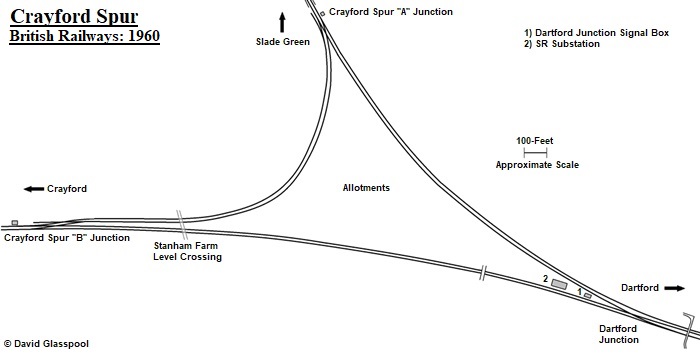 Click the above for a larger version. © David Glasspool 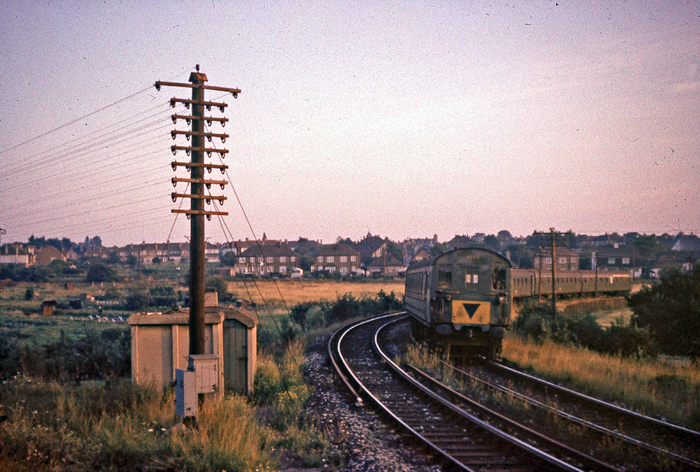 A southward view shows a formation of 2-HAP units rounding the curve of the spur, heading towards the camera and about to join the North Kent Line at Crayford Spur "A" Junction. Allotments occupy the land on the left, whilst on the right of the track is Stanham Farm. © David Glasspool Collection