This is a station which suffered particularly badly at the hands of its former owner, British Rail, that it today presents a somewhat desolate scene to the waiting passenger. Crowhurst is located 4⅔-miles from Hastings on the main line via Tunbridge Wells, immediately beyond milepost 57½ from Charing Cross via Chislehurst. The station came into use on 1st June 1902, just over fifty years after through running between London and Hastings commenced on the route. Its raison d'être was to serve as an interchange point between the main line and the 4½-mile-long double-track branch to Bexhill-on-Sea (known as "Bexhill West" from 1929), which opened to passenger traffic on the same day. Until this stage, so uninhabited was the area that there was never any call for a station at this site - the recorded population of the village of Crowhurst was 591 in 1861.

The SE&CR spared no expense at this rural location, no doubt the company's optimism regarding traffic levels along the Bexhill branch playing a part, and an opulent air was achieved by creating a spacious layout with generous provision of platform structures. The arrangement at Crowhurst was not unlike that at Ashford: two "through" platform faces, 630-feet-long, were fed by loops off the main line, thus were separated by a total of four tracks. Additionally, two outer platform faces each served south-easterly-facing bay lines which had direct connections with the diverging Bexhill branch. The SER became known for quadruple track layouts at stations, such arrangements having also come into use at Tonbridge, Paddock Wood, Canterbury, and even Gravesend.

The main station building at Crowhurst was situated on the "up" platform and its design was based on those structures which had earlier come into use at Ashford and Shornecliffe Camp (Folkestone West). The main part of this was 75-feet by 20-feet, accompanied by a 15-foot appendix on its eastern side, and was built from yellow brickwork. Single-storey and with a hipped slated roof, it featured sash-style arched windows and comprised a 25-foot-long canopy over the forecourt entrance. To the immediate west of the main building was a small structure of the same construction, no greater than 18-feet by 12-feet, which became a lamp room. The "down" side was also provided with a single-storey building, although this was of smaller dimensions than its "up" side counterpart, being roughly half the width and having a standard pitched, rather than hipped, roof. Splendid canopies, of about 85-foot length and each supported upon four stanchions, were attached to "up" and "down" buildings. These comprised ridge-and-furrow roofs frescoed with intricate clover-patterned timber valances, an SER trademark. Finally, passengers crossed the line by a 75-foot-long lattice footbridge at the London end of the layout, although barrow crossings did exist at this point and midway down the platforms.

Given that this station was primarily a passenger interchange point between main and branch lines, goods facilities here were limited. These comprised a pair of sidings adjacent to the "up" bay line and, as the below track diagram shows, they could only be accessed by means of a head shunt manoeuvre. The presence of the branch line did call for a water tower to be built, this being situated next to the goods sidings.

The Bexhill line was closed to passenger traffic on 1st January 1917 as a wartime economy, a cutback which was made to a series of branches at the time. Crowhurst station remained open and, indeed, Bexhill was still reachable by the LB&SCR's route from Victoria via Lewes. Passenger services between Crowhurst and Bexhill-on-Sea resumed on 1st March 1919.

Track plan of Crowhurst prior to rationalisation. Click the above for a larger version. © David Glasspool 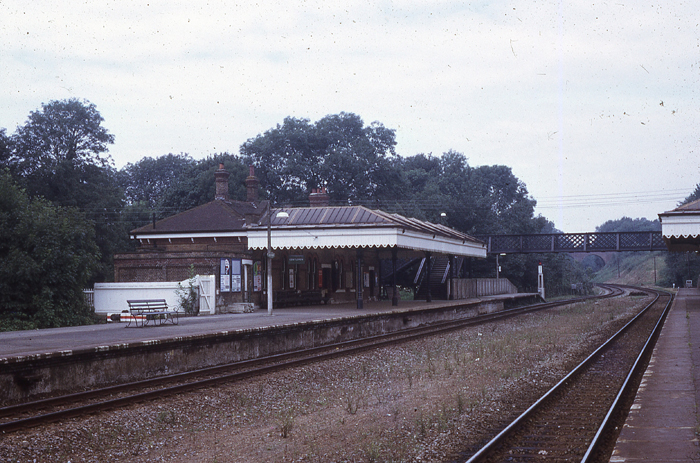 A westward view shows the "up" side main building, by then 70 years old, complete with hipped roof canopy and splendid clover-patterned valance. The canopy of the "down" building can just be seen emerging from the right. The buffer stops of the former "up" bay, on the left, were still sporting a smart coat of paint, and BR "Sausage" Totems remained in evidence. The gap where two tracks once laid is obvious. © David Glasspool Collection 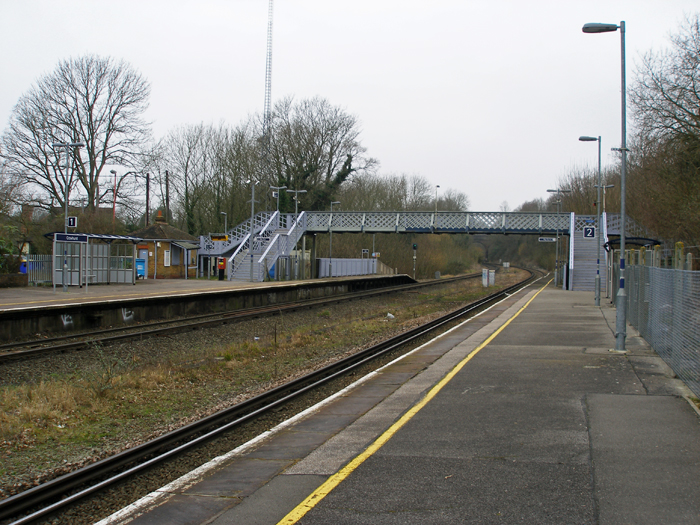 Fast-forwarding to 2009, it is evident that there have been a lot of changes. Canopies and main buildings on both platforms have disappeared, leaving the lattice footbridge as the site's most significant structure. The concrete platform extension beyond the footbridge dates from 1957, when lenghtening took place in preparation for twelve-car DEMU services. © David Glasspool 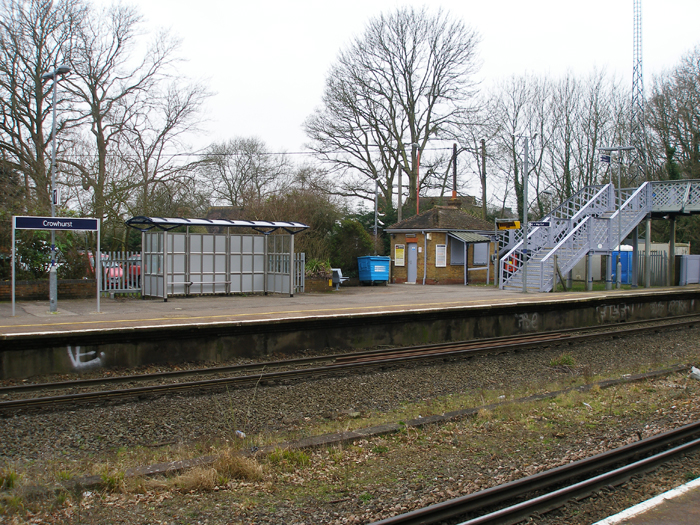 In addition to the footbridge, a small hipped roof standalone structure survived demolition. Formerly being a lamp room, it is now used as a ticket office, and can be seen on the map sandwiched in-between the main "up" building and footbridge. © David Glasspool