As mentioned in the Wandsworth Road section, electrification of the entire LB&SCR network was sanctioned in 1903, based on an overhead wire system carrying 6,700 Volts A.C. The South London Line effectively became the guinea pig and during 1908, lattice gantries were erected along the route’s entirety. Naturally, only the southern pair of platforms at Denmark Hill were straddled by these structures, and the wires became ‘’live’’ in the following year, public electric services commencing between London Bridge and Victoria on 1st December 1909. As part of this scheme, a trailing crossover was installed between South London Line tracks at the eastern end of the Denmark Hill site, in-between the platforms and the portal of Grove Tunnel.

Under the Southern Railway, it was eventually decided to abandon the ex-LB&SCR’s overhead wires and standardise on the 660-volt D.C. system pioneered by the LSWR. Public electric services on the South London Line changed over to D.C. operation on 17th June 1928, but the gantries remained in situ for some time afterwards. Many of these lattice structures were eventually recycled, some being shipped over to the Isle of Wight in 1930 to form the framework of a new engine shed at Ryde St Johns Road. At the same time, a light changing exercise occurred at Denmark Hill, whereby the Victorian gas lamps were replaced by electric lights, the latter sporting the SR’s trademark hexagonal shades and ‘’Target’’ name signs.

A series of signalling alterations took place under British Railways, instigated by the Kent Coast Electrification Scheme. Colour light signals came into use on ‘’Chatham’’ metals between Factory Junction and Croton Park on 8th March 1959. On the same date, colour lights replaced semaphore signals on the South London Line between Factory Junction and Denmark Hill. Thereafter, Denmark Hill signal box controlled the South London Line tracks through the station only. The cabin even ceased in this function and closed on 16th December 1962, when the section of line between Denmark Hill and Peckham Rye (of which was 1650-yards distant) was brought under the control of three-aspect colour lights.

Far into the BR era, Denmark Hill remained a fine example of an original South London Line station, complete with its substantial main building and splendid platform canopies. Indeed, the same could be said of Battersea Park, which, too, retained much of its original finery. Even Peckham Rye had managed to keep its enormous main building, although the station’s platforms had been completely rebuilt during 1961. However, in March 1980, disaster struck when Denmark Hill’s high-level building was gutted by fire through an arson attack. Apparently, no railway building was insured at that time against fire, because of the high cost of premiums. The British Rail culture had for long been one of dispensing with historic buildings of a bygone age, thus it was left to the 1970-formed ‘’Camberwell Society’’ to campaign for a restoration to take place. £150,000 was eventually raised through a mixture of donations from the Camberwell Society, British Rail, Southwark Environment Trust, the Historic Buildings Council, and the Greater London Council. It was decided to convert the majority of the booking hall into a pub, and this opened in June 1984. The latter was part of the ‘’Firkin’’ chain of pubs, and was named the ‘’Phoenix & Firkin’’. In addition to restoration of the station building, alterations were also made at platform level. The canopies were reduced in length by 70-feet and the timber valances simplified. Period lighting was installed on all surfaces, swan neck lamps – reminiscent of the SR era – making an appearance on the ''down'' platform of the ''Chatham'' lines. These installations replaced Southern Region concrete bracket lampposts, which dated from the early 1960s.

The 21st Century was set to bring a new wave of changes to Denmark Hill, in a strive by Network Rail and local authorities to bring step-free access to station platforms. In 2011, a scheme got underway to erect a new glass and concrete footbridge at the eastern ends of the platforms, attached to a trio of lift shafts. The new structure came into use in August 2013, resulting in the abolition of many of the period lampposts which were installed as part of the aforementioned restoration.

2 EPB No. 5673 is seen on a Bromley North to Victoria working, as passengers embark. Note the timber platform offices on the island platform, complete with sash-style windows, now no longer evident at the station today. © David Glasspool Collection 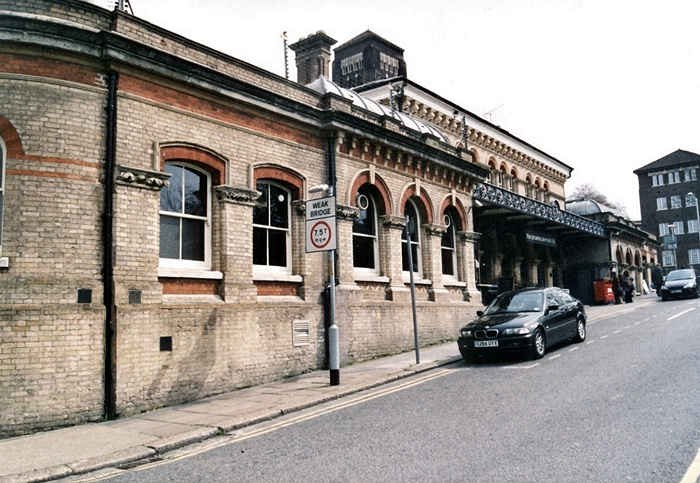 After a fire gutted much of the interior in 1980, British Rail was keen to demolish the main ''high-level'' building. Happily, it was instead splendidly restored, the majority of the structure becoming a pub. Architecture of this ilk still exists at ex-LB&SCR stations Peckham Rye and Battersea Park. © David Glasspool 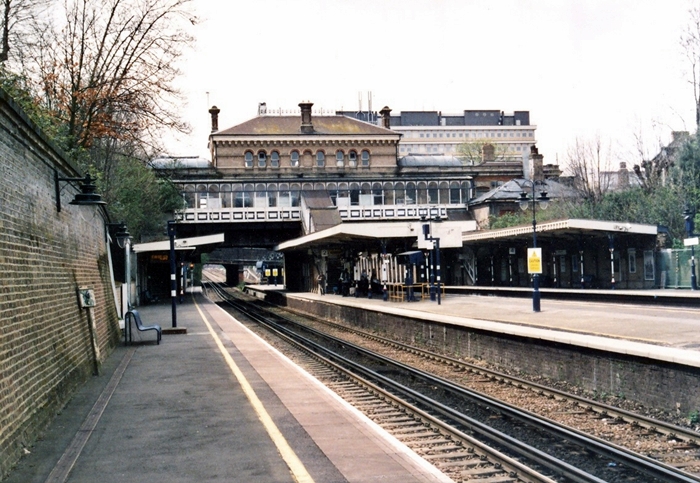 This unobstructed westward view is no more after the completion of a glazed footbridge across the platforms' eastern ends. In the background, the four lines can be seen ascending through Denmark Hill Tunnel, towards Cambria Junction. © David Glasspool