This interesting site is located far out on Kent’s southernmost point, in the United Kingdom’s only desert and Europe’s largest shingle foreland. It lies at the end of the remnants of a single-track branch line dating back to 1881. Briefly re-capping, a line across the Romney Marsh between Ashford and Hastings was brought into use by the SER on 13th February 1851. By Act of 8th April 1881, the nominally independent ‘’Lydd Railway Company’’ was formed to build a ten-mile single-track line across the bleak peninsula to Lydd and Dungeness. This left the Ashford to Hastings line at Appledore, and the section of line between there and Lydd was opened to passengers on 7th December 1881 – beyond, to Dungeness, was initially goods only. Passenger services were extended to Dungeness on 1st April 1883. On 19th June of the following year, a three-mile single-track line was opened to passengers from ‘’New Romney Junction’’, 7¾-miles south of Appledore, to New Romney.

We now fast-forward to 4th July 1937, when the Southern Railway opened a re-aligned branch line to New Romney. It left the Appledore to Dungeness line 1¼-miles south of the original ‘’New Romney Junction’’, at ‘’Romney Junction’’, and had been re-sited closer to the sea to entice holidaymakers to the shingle wasteland. As a result, the last passenger trains served the diminutive station at Dungeness the previous day, but the short stretch of track beyond Romney Junction remained in use for goods traffic. In this capacity the short stub ceased in May 1953, and the track to Dungeness was lifted. Ordnance Survey Maps confirm that the junction was completely abolished, but the name retained as a reference point.

In July 1960, construction of Dungeness’ ‘’A’’ nuclear power station commenced. Reactor 1 started supplying electricity to the National Grid in September 1965, full power operation being achieved in November of that year. By this time, the branch line to Lydd and New Romney was in terminal decline – at least for passenger trains. A stone terminal was brought into use at Lydd in 1965 and became a railhead for aggregate trains. Passenger services to Lydd and New Romney ceased on 6th March 1967, and the 1937-opened branch line to the latter was lifted.

A short stub of the New Romney branch, little more than 250-yards in length, was retained, and a 200-yard-long stretch of the former Dungeness spur was re-laid. Upon the latter was established a secure compound where nuclear waste from the nearby power station could be loaded onto ''Flatrol'' wagons and subsequenly dispatched to Sellafield, Cumbria.

Generally, the original schedule saw that one train a week ran between Dungeness and Sellafield – at the latter, the waste delivered from the former was re-processed. This involved splitting up waste fuel into its various individual components, such as uranium and plutonium, so that in some cases, it could be re-used to produce new nuclear fuel. In 1984, Dungeness ‘’B’’ became operational, construction having started as long ago as 1965.

Track plan of 1977, showing run-a-round loop and the short remaining section of the New Romney branch. Drawn by David Glasspool

Track plan of 2005, by which time the New Romney stub had gone. Drawn by David Glasspool 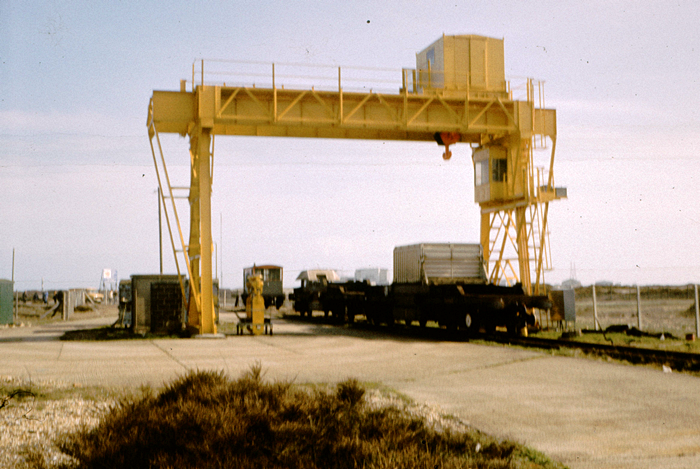 A view of the gantry crane at the Lydd CEGB Siding used for transferring nuclear flasks between rail wagons and road vehicles for movement to and from Dungeness A & B Power Stations. As the crane could only raise or lower and traverse sideways it was necessary for wagons to be positioned centrally under the gantry, therefore during BR days a shunting tractor was kept on site to enable the positioning of wagons without the use of a locomotive. BR also used the crane for handling other special traffic from time to time, such as railway footbridges and heavy loads for the nearby MoD Lydd Ranges. © David Morgan 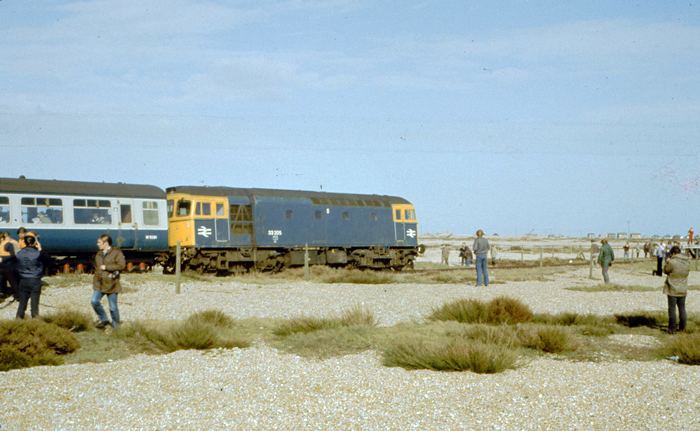 33205 stands amid the shingle surrounding the remaining stub of the former New Romney Branch, having hauled the Hertfordshire Rail Tours “Dungeness Pebbledasher” charter from Ashford. This train had originated from Reading and traveled via Grain, Dover Western Docks and Folkestone Harbour. Just visible on the far right is the buffer stop located at milepost 74. © David Morgan 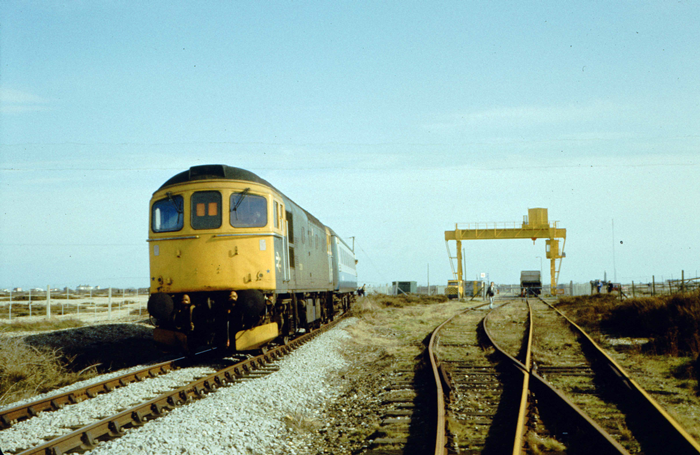 33201 stands on the remaining stub of the former New Romney Branch whilst bringing up the rear of the Hertfordshire Rail Tours “Dungeness Pebbledasher” excursion from Reading. On the right is the Lydd CEGB Siding, access to which was via a ground frame-worked connection. Just visible by the crane is a shunting tractor that was used for re-positioning wagons when no locomotive was present. © David Morgan