This is yet another station on the South Eastern Division which tells a depressing story of decline, degrading, and ‘’modernisation’’. Dunton Green came into use with the Chislehurst to Sevenoaks section of the SER’s Tonbridge cut-off line on 2nd March 1868. Surrounded by green fields, the station was built to the SER’s standard, modest clapboard architecture, which was similarly implemented at nearby Chelsfield and Sevenoaks Tubs Hill. With two platforms in evidence, the main clapboard building was positioned on the ‘’up’’ side, demonstrating a virtually identical appearance to the structure still in evidence at Hildenborough (excluding, of course, the latter’s modifications made by BR). The ‘’down’’ side was graced with a large waiting shelter which demonstrated the same flat-roofed canopy design of the main station building (with a valance comparable with that still in evidence at Plumstead). The shelter came complete with wrap-a-round sides for protection from the elements, and the length of the structure matched that of the ‘’up’’ side canopy. It is worth noting at this point that a very similar waiting shelter to the one just described can still be found at New Eltham, albeit with a modified BR canopy. As per usual with earlier SER stations, Dunton Green lacked a footbridge from the outset, although such economical measures were later reversed at many stations when the Board of Trade began tightening standards near the end of the 19th Century.

Goods provision here was frugal, and just one siding was in evidence, this trailing off the ‘’up’’ line in a south-westerly direction, to the north of the platforms. Insignificant this track may have been when first laid in 1868, it would later see an upsurge in the traffic which would use it, but not necessarily in the coal capacity it was originally intended for.

On 24th July 1876, a concern known as the ‘’Westerham Valley Company’’ was formed, when Parliamentary approval was received for the construction of a 4¾-mile long branch from Dunton Green to the organisation’s namesake. The branch, single-track in nature, brought an array of improvements to the existing Dunton Green site. Contractors ‘’Stevens & Sons’’ were drafted in by the SER to re-signal the layout, which provided the station with its first signal box, immediately beyond the northern end of the ‘’up’’ platform. This was an all-timber affair, towering at three-storeys in height. The goods siding, mentioned earlier, was subsequently converted into a through line, forming the beginning of the Westerham branch, and a third platform, a curved affair, came into use alongside it. The latter featured an ornate flat-roofed canopy, harmonious in design with the existing structures. Substantial earthworks immediately west of the ‘’up’’ platform took place, which included widening the embankment to accommodate a trio of new northward-facing goods sidings, in addition to the formation of a completely new embankment to carry the branch line. Whilst the ‘’down’’ side remained unchanged during these works, the original ‘’up’’ side saw its canopy roughly double in length, thus matching the extent of the then new structure on the third platform. These alterations were combined with the installation of a covered footbridge, identical in style to that at nearby Chelsfield (bearing a resemblance to a cross between a lattice design and a prefabricated concrete structure) – the aforementioned lengthening of the ‘’up’’ side canopy provided a covered walkway all the way up to the footbridge’s flight of stairs. It was the presence of the footbridge which required the signal box to be three storeys high, permitting the signalman an unhindered view across the whole layout. Lastly, a subway appeared, which passed underneath the Westerham line and linked the forecourt of the main station building with a footpath to the west. The Westerham branch finally opened on 7th July 1881.

Between 1900 and 1905, the SE&CR undertook a modernisation and upgrading programme on its suburban network, to improve London commuter services. Quadrupling and re-signalling of the line took place between St Johns and Orpington inclusive, such involving station rebuilds and the opening of completely new sites. Orpington, Grove Park, and Hither Green stations were wholly transformed, and a new set of platforms at Elmstead Woods opened as a consequence of the works. Re-signalling of the route also included that section through Dunton Green, and here, the three-storey high signal box of Stevens & Sons was abolished. A conventional two-storey-high SE&CR cabin, based on an earlier Saxby & Farmer design, appeared on the ‘’down’’ side, at the northern end of the platform. The location of the later signal cabin placed the signalman on the opposite side of the main running lines to the branch line. Therefore, in order to exchange the token for the single-track Westerham branch, a series of ropes were suspended across the main line, between the signal box and branch platform, for the token to traverse along. During these five years, a new signal box was not the only feature to arrive at Dunton Green: a replacement footbridge also emerged. This came second-hand from Grove Park, which had been subject to complete rebuilding, and follows in the footsteps of a similar recycling act undertaken by the LC&DR. Indeed, when this concern rebuilt its Chatham station, the original footbridge was dispatched for reuse at Kearsney.

The Southern Railway’s tenure of the station can mainly be associated with electrification of the route. Quite soon, the SR began installing third rail on ex-SE&CR suburban lines to improve service speed, efficiency, and frequency. Consequently, in 1934, the company extended the southern end of Dunton Green’s ‘’down’’ platform with prefabricated concrete, in preparation for the commencement of electric services the following year. Scheduled electric formations subsequently began running through to Sevenoaks from 6th January 1935 onwards, as a result of third rail extension from Orpington (the latter of which had been host to electric services since 1925, via Bickley Junction).

Naturally, the British Railways era marked the beginning of the decline for this station. By 1960, both ‘’main line’’ platform canopies had been rebuilt with plain valances, and the footbridge had lost its roof and glazing. The branch platform retained its ornate canopy, presumably because it was known that the Westerham line itself was not long for the world. True this was, for the final services along the line ran on 28th October 1961. Closure of the branch was followed just over five months later by the decommissioning of the trio of goods sidings behind the ‘’up’’ platform. Circa 1968, drastic economies were taken, and the dreaded ‘’CLASP’’ modular system appeared. All ‘’down’’ side platform structures were demolished and replaced by a single, featureless CLASP waiting shelter. The main ‘’up’’ side building survived, complete with canopy, but a CLASP shelter still appeared immediately to the north of it. Unsurprisingly, all platform structures relating to the now closed branch line were obliterated, but the subway, complete with brick surround and roof, remained intact. The signal box was the next casualty, this last operating on 2nd August 1973, its control transferring to the ‘’power box’’ at Sevenoaks. Finally, in the ten years spanning from 1986 to 1996, much original SER clapboard on the South Eastern Division was demolished, as station modernisation programmes took hold. Within the latter part of this period, the last remaining structure from the Dunton Green of 1868 – the main station building – was razed to the ground, leaving just the featureless CLASP shelters, the lattice footbridge second-hand from Grove Park, and the subway entrance of 1881. By this time, the station building was already devoid of its canopy and featuring boarded up windows. 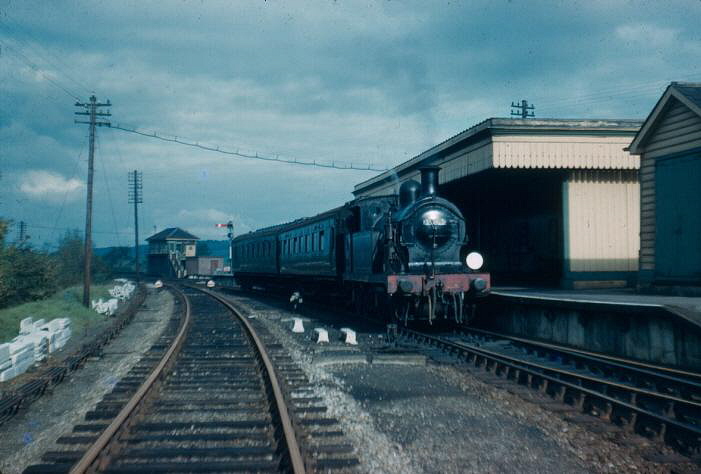 A 1960 view depicts ''H'' Class Tank No. 31263 stabled at the branch line platform at Dunton Green, fronting a Maunsell push-pull set bound for Westerham. In the background can be seen the SE&CR-built signal box, which replaced a Stevens & Sons cabin perched upon the apex of the branch and main line ''up'' platforms. © David Glasspool Collection 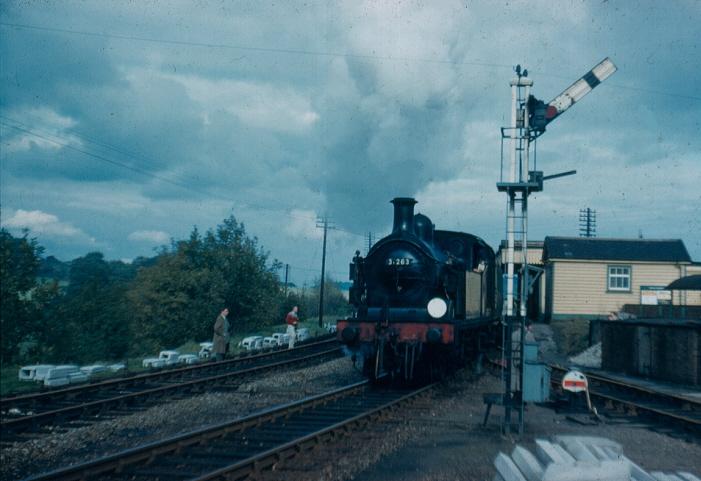 No. 31263 is seen departing for Brasted and Westerham. This photograph affords a view of the spur to the goods yard, on the right, and also in evidence are piles of new concrete channelling. © David Glasspool Collection 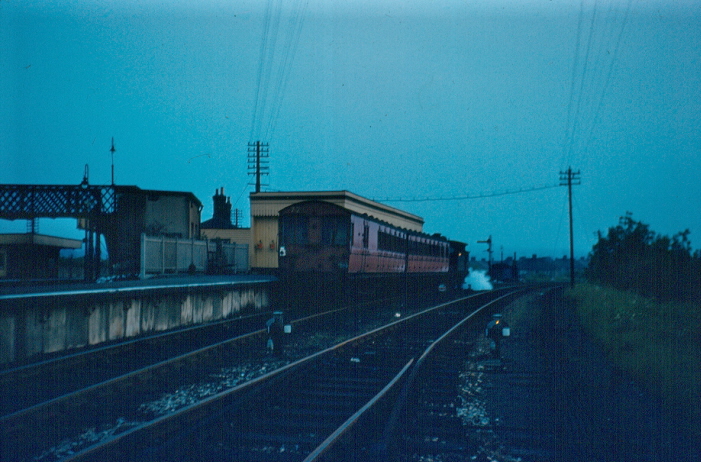 Although of poor quality, this view of the diverging Westerham branch includes the lattice footbridge, formerly in use at Grove Park, and the chimneys of the main ''up'' side building. On the far left can be seen the waiting shelter of the ''down'' platform. The two-storey-high rectangular concrete structure, immediately adjacent to the footbridge, is an electricity substation, which came into use with the Sevenoaks electrification of 1935. © David Glasspool Collection