Today, only a staggered platform arrangement remains as testament to SER practice at this station, later British Rail modernisation having taken its toll. Edenbridge came into use with the Reigate Junction (Redhill) to Tonbridge section of the SER’s Dover trunk line on 26th May 1842, and became a station typical of the route. Track laying between Edenbridge and Tonbridge had earlier been completed in November of the previous year.

The SER standardised architecture at its small intermediate affairs along the route. The company was able to erect stations quickly and cheaply by extensive use of timber components for main buildings. In fact, in their first years, several of the earliest SER stations lacked any major buildings and, in a number of cases, were even without platforms – passengers embarked on services by means of stacked up wooden planks! Thankfully, for users of Edenbridge, the station developed into a ‘’proper’’ site, complete with the aforementioned staggered platforms, which were linked together by a track foot crossing. As mentioned elsewhere on the website, the SER arranged station platforms in a fashion which ensured that passengers using the track foot crossing always passed behind a stabled train. Edenbridge’s main building was positioned on the ‘’down’’ platform, and was a familiar architectural feature: it was a modest, single-storey affair, comprising tongue-and-groove timber throughout, set upon a brick base, and was host to just a single chimneystack emerging through a slated pyramid-shaped roof. The building was not without finesse, and a small porch canopy was in evidence on both northern and southern elevations of the structure, covering the respective entrances – it is likely, however, that these were later additions. Mention should also be made of Edenbridge’s ‘’up’’ platform. This was equipped with a single, basic, tongue-and-groove waiting shelter, complete with wrap-a-round sides, and lacked any form of canopy. It was virtually identical in appearance to the timber waiting shelter which has been a feature of Appledore’s ‘’up’’ platform in recent years. For long, Gentlemen’s toilets existed on the ‘’down’’ platform, within a wooden-clad appendix affixed to the western elevation of the main building.

Not only was architecture at many intermediate stations standardised, but so too were the track layouts (this was not a unique SER practice). Doubling up with the track foot crossing was a single track which linked a pair of wagon turntables, each situated on opposite sides of the running lines. These were common features of SER goods yards in rural Kent, and they were in turn fed by lengthy sidings which flanked the platform lines. Of particular note was this station’s goods shed. The structure was positioned on the ‘’down’’ side of the layout, just west of the platform and wagon turntable. Unusual was the fact that the building was of all timber construction, rather than the more customary brick composition. Comprising a pitched roof, the building accommodated a single track (although was wide enough to take at least three), the latter of which passed through the building to reach the ‘’down’’ side wagon turntable. Immediately adjacent to the goods shed's western elevation was a raised platform, which became host to cattle pens. The layout west of the platforms is sufficiently complex to warrant a track diagram, of which is illustrated below.

Initially, all points were controlled by immediately adjacent levers, and the signalman was housed in a small timber hut located end-on to the track foot crossing, on the ‘’up’’ side of the tracks. Even this diminutive structure was able to command a set of the SER’s sash-style windows! This arrangement was greatly improved upon circa 1885, when a re-signalling scheme saw the erection of a larger, two-storey-high signal box at the western end of an extended ‘’up’’ platform (the ‘’down’’ platform was similarly lengthened). This was built to the SER’s own in-house design, complete with clapboard sides, a pyramid-shaped slated roof, and sash-style windows. The original signal hut, however, remained in existence, albeit not in the capacity of signal box.

Further to the 1885 modifications, these also included the addition of a second waiting shelter on the ‘’up’’ side, mid-way along the platform. This was somewhat more stylish than the existing waiting shelter, which itself was retained. Of all timber construction, the new fabrication featured wraparound sides, a backward-sloping roof, and was to a similar design as those shelters which later came into use with the wooden-built Leigh Halt in September 1911. Further additions under SE&CR auspices included the building of a crème brick wall lining the rear of the ‘’down’’ platform, the installation of metal railings along the rear of the ‘’up’’ platform, and the abolition of the wagon turntables. The Southern Railway made its own mark at Edenbridge. This appears to have included the building of a prefabricated concrete extension beside the ‘’up’’ side Gentlemen’s toilets. Swan neck gas lamps and ‘’Target’’ name signs, SR trademarks, were installed along the platforms, and the original ‘’up’’ side waiting shelter of the SER also acquired a canopy concurrent with this.

This track plan can be viewed in two formats. Click the above image for a full length version of 2500 x 564 pixels. Alternatively,

click here to display the plan in a trio of sizeable chunks. Drawn by David Glasspool 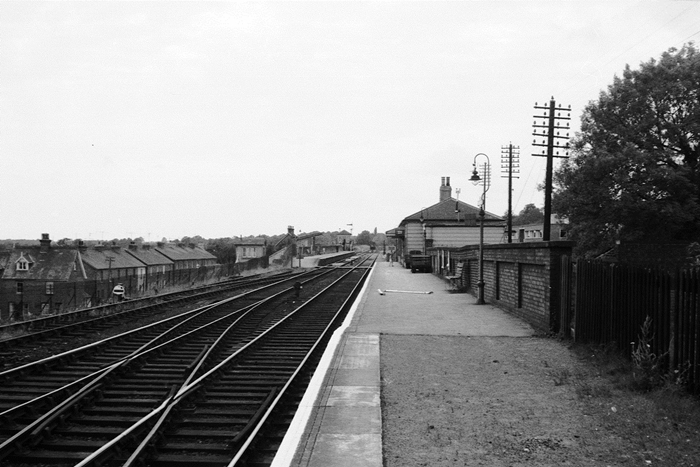 A steam-hauled service is disappearing off into the distance in this westward view of Edenbridge, taken from

the ''down'' platform. This view shows the original SER station in its entirety: on the right is the tongue-and

-groove timber single-storey main building, which was flattened in June 1971. On the left, immediately before

the ''up'' platform and in line with the track foot crossing, is the original SER signal box, which was superseded

by that at the far end of the station circa 1885. We can also see the ''up'' side timber waiting shelter with its

sloping roof and, behind the main station building, on the right, the factory which has since given way to 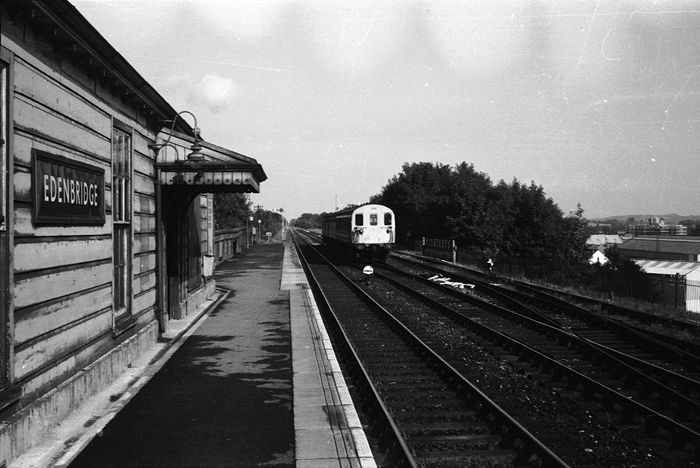 ''Tadpole'' unit No. 1201 is seen approaching with a Tonbridge to Reading service, two years before the SER

building was flattened. The latter can be seen on the left complete with sash-style windows and SR Swan Neck 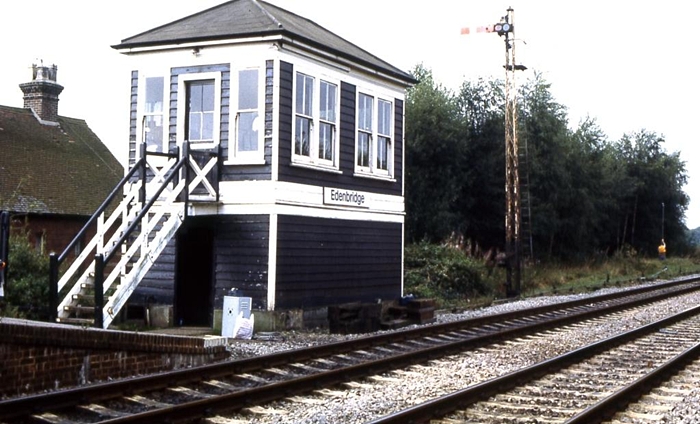 Peter Gibbons has kindly submitted the following photographs for inclusion, depicting Edenbridge at a time

when semaphore signals stilled reigned supreme. The quaint SER-designed signal box could once be found at

the Redhill end of the ''up'' platform, wearing an unusual colour scheme. © Peter Gibbons