Although the victim of extensive bomb damage during World War II, the station at Elephant & Castle has managed to retain much of the brickwork laid by the company under which it was commissioned, the London Chatham & Dover Railway. The station opened on 6th October 1862, when the first 3¾-mile section of the LC&DR's double-track City spur from Herne Hill came into use. For this, it temporarily served as a terminus until a northward extension to a Blackfriars station, on the Thames' South Bank, was opened. The line formed part of the 1860-authorised "Metropolitan Extension", the other critical portion of which sanctioned the LC&DR to construct a line from Beckenham to Stewarts Lane (Battersea), via Herne Hill.

Elephant & Castle was perched above the South London suburbs upon a viaduct, on top of which two timber-planked platforms were laid to keep weight down. Passengers were given ample protection from the elements by a pitched roof trainshed measuring 75-feet-wide by 160-feet-long. This comprised a light iron framework supported on either side by brick walls, the latter of which were built from the LC&DR's favoured light brickwork. The walls were frescoed with this company's distinctive parti-coloured arched window outlines, and similar trainsheds were also brought into use at Canterbury, Sittingbourne, and Dover.

When the initial section of the City spur was opened in 1862, the first services simply ran between Victoria and Elephant & Castle, for which traffic receipts were stated in "The Bromley Record" (1st September 1863) to average £90 a mile a week (£7,766 at 2015 prices) for the first six months of operation. These trains had to endure a tedious reversal at Herne Hill for the first seven months after the line opened, until a spur was brought into use between Brixton and Loughborough Junction on 1st May 1863, allowing continuous through running.

Expansion occurred early. The line was extended northwards over the Thames in 1864, after the City Corporation had finally come to a decision on the design the railway bridge across the river should be. Public services to a temporary station on Earl Street, on the north side of the Thames, commenced on 21st December of that year, and the original Blackfriars became a through affair. Earl Street was replaced by a permanent station at Ludgate Hill on 1st June 1865 and finally, on 1st January of the following year, the last section of line from there to Farringdon, where the metals of the Metropolitan Railway were met, opened.

In conjunction with the works to open through to Farringdon, quadrupling of the line from Herne Hill to the southern approaches of Blackfriars station (thence northwards already being four-track) was undertaken, completion coming in 1866. As part of this, Elephant & Castle received a further two platform faces on its western side, upon a parallel-running viaduct. For decades, these platforms always looked like an afterthought, given that the trainshed of 1862 was retained over the original two lines whilst the later additions received standard canopies. Of the latter, that canopy on the eastern side of the new viaduct was attached to the brick wall supporting the western side of the trainshed, and ran for the same length of 160-feet. The second canopy, on the western extremity of the layout, also 160-feet-long, was mildly backward-sloping and, given that it was equipped with timber wraparound sides, was essentially a giant waiting shelter. Both canopies sported an intricate timber valance and the pattern deployed here can still readily be seen today at Margate, in spite of the latter being nearly sixty years younger.

The station's first "proper" signal box came into use in about 1885. This was an all-timber cabin built by Saxby & Farmer, with a hipped slated roof, and was situated at the northern ends of platform Nos. 2 and 3. Combined, platform Nos. 2 and 3 formed a timber-planked island in-between the tracks commissioned in 1862 and 1866. 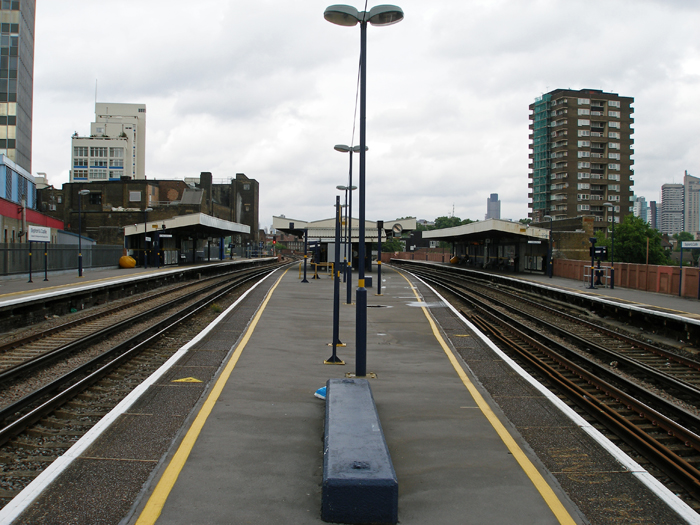 A northward view from platform Nos. 2 and 3 has the double tracks of the lines of 1862 and 1866 on the right and left respectively. On the far left is the 1965-completed shopping centre, through which passengers accessing/exiting the station on this side must pass through. © David Glasspool 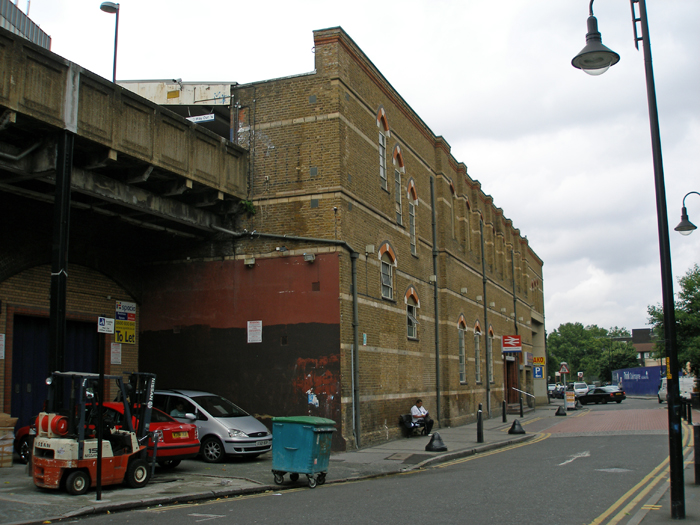 Still showing bomb scars from World War II, the unmistakably LC&DR brickwork with parti-coloured window arches has survived the test of time remarkably well. The same window design can still be witnessed at nearby Herne Hill and deep into Kent at Maidstone East. © David Glasspool 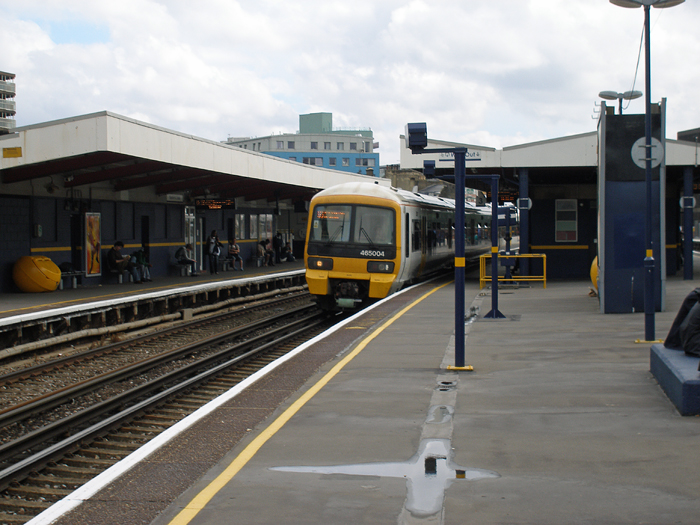 Class 465 No. 465004 is seen Blackfriars-bound at platform 3, upon that part of the station which opened in 1862. The platform canopies date from BR's partial rebuilding in 1948. © David Glasspool