This is a site which has witnessed much change, both to its railway connections and platform structures, the latter partly courtesy of the Luftwaffe. At Elmers end, passengers once had the option of interchanging between trains for three separate routes: branch lines to termini at Addiscombe and Hayes, and a through route which connected to the Oxted line at Selsdon. Today, the scene is very different: the former British Rail lines to Selsdon and Addiscombe have long since been erased from the map, and the station at Elmers End is now shared with a standard gauge light rail line, better known as the "Croydon Tramlink". Indeed, should the ambitions of the proposed southward extension of the Bakerloo line ever be fully realised, the Lewisham to Hayes National Rail route will also be no more.

On 1st January 1857, the Mid-Kent Railway opened a 4¾-mile double-track line between the South Eastern Railway's (SER) North Kent Line at Lewisham and the Farnborough Extension of the ''West End of London & Crystal Palace Railway'' (WEL&CPR) at Beckenham. This was followed on 1st April 1864 by the opening of a 3-mile 40-chain double-track southward extension to Addiscombe, Elmers End coming into use at this time. The line had been authorised on 17th July 1862 and built under the auspices of the "Mid-Kent Railway", the latter of which was formally absorbed into the SER on 16th July 1866.

The first station at Elmers End was a simple layout comprising two platforms around the double-track line, between which passengers used a track foot crossing. The "down" platform was host to a substantial house, which encompassed the booking hall and Station Master's accommodation. This structure was two-storeys-high, of creme brick construction, comprised gabled pitched roof sections covered with slate tiles, and inset to its western elevation was a short platform canopy. By comparison, the "up" side lacked any platform structures.

Elmers End was nestled in flowing green fields, a very rural affair. Goods traffic at the station was of no importance, for not a single siding was provided from the outset. However, this was set to change on the advent of the West Wickham & Hayes line, which the SER opened to public traffic on 29th May 1882. The junction for the 3¼-mile-long double-track branch was made immediately south of the platforms at Elmers End. As a result, the station was greatly enlarged, which included the provision of sidings on the "up" side to handle coal traffic, no doubt to serve those houses which had started to emerge north and east of the station.

Additionally, as part of the 1882 Hayes works, southward-facing bay lines on both sides were afforded by the extension of the platforms in that direction; lengthening also took place northwards. A new main building was erected on the "up" side of the line, upon the then new northward platform extension. This was a single-storey structure of creme brick construction, about 90-feet-long, with a hipped slated roof and sash-style windows. It was built to a standard design, akin to the "high-level" structure which can still be seen today at Clock House, and attached to its platform-facing elevation was an attractive canopy, 65-feet-long. The latter was of a curved roof design, as per that which still exists at Knockholt, and featured the SER's trademark clover-patterned valance. The "old house" of 1864 was retained during rebuilding, and its canopy was extended both northwards and southwards. At the same time, the track foot crossing between platforms was superseded by a roofed lattice footbridge. Finally, the revised layout was controlled from a clapboard SER-designed signal box situated within the fork of the diverging Hayes and Addiscombe routes. Track revisions over the years can be seen on the accompanying diagrams.

Under the Southern Railway, electrification of ex-SE&CR suburban lines using the 660-Volts DC third rail system pioneered by the LSWR was swift. Cannon Street and Charing Cross to Addiscombe, Hayes, Orpington, Bromley North, and Beckenham Junction electric services were earmarked for a 1st December 1925 start, but power supply problems pushed this back to 28th February of the following year. As part of the works, an electricity substation was built at Elmers End, beside the "down" side bay line used by Hayes trains. This was of a standard design, comprising a steel frame surrounded by red brick, and housed three rotary converters rated at 1,500 kW. The converters stepped down electrical current supplied by Deptford Power House to 660 Volts DC. It was also around this time that the SR's trademark swan neck lamps upon barley-twist posts were installed along the platforms.

Track layout after general rebuilding in connection with the opening of the Hayes line. Click the above for a larger version. © David Glasspool 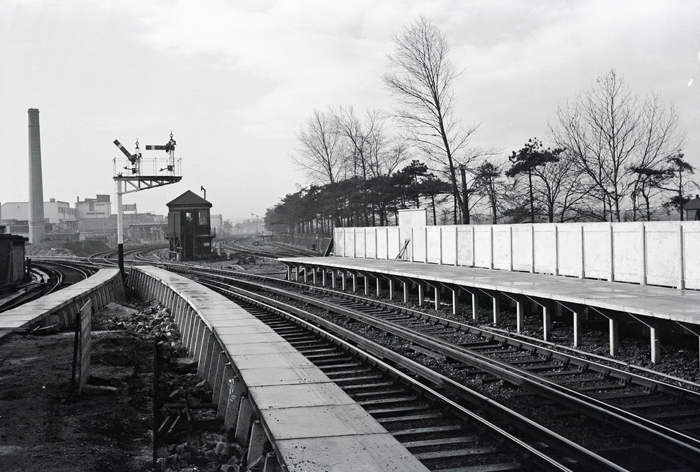 A southward view in 1957 shows extension of both platforms in progress. The Addiscombe line had recently been re-routed to the left of the signal box, but connections to the "up" side goods yard remained to the right of the cabin. Note the catch points on the "down" bay line. © David Glasspool Collection

Track layout after the connection between the Hayes branch and "up" bay line had been taken out and the southern approaches simplified. Click the above for a larger version. © David Glasspool 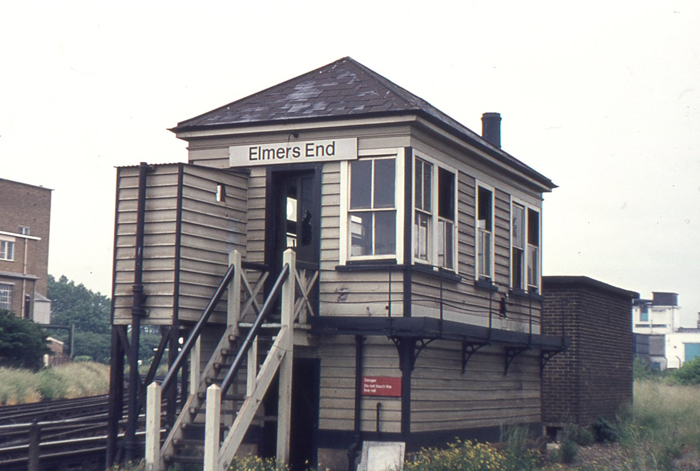 The signal box is seen shortly after closure, a smashed door window evident, having been superseded by colour light signals controlled by the "London Bridge Signalling Centre". Note the typical SER features of sash-style windows and clapboard. The junction between Hayes and Addiscombe branches is behind the signal box. © Roger Goodrum 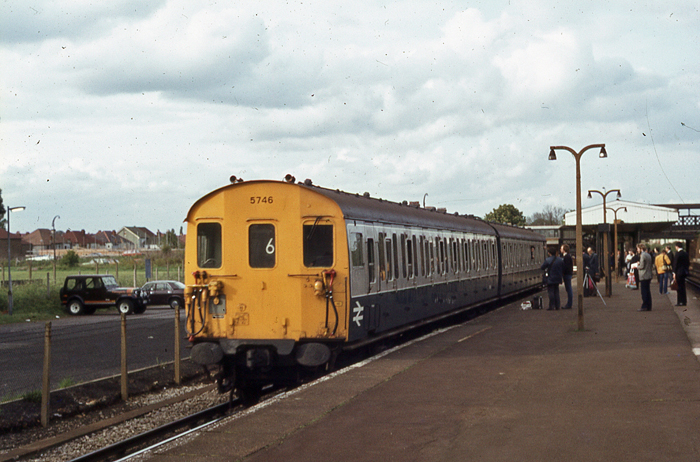 2 EPB No. 5746 is seen in the "up" bay line on the last day of services on the Woodside to Selsdon line. The canopy valance and concrete lampposts date from 1961. The car park on the left occupies the former site of the goods yard. © David Glasspool Collection