Having been in operation for ninety years, today there is no trace of this station having ever existed, the site having fallen foul to a road widening scheme. "Well Hall", as the station was first known, was the subject of two closure attempts during its lifetime - the second of which succeeded - and came into use with the 8¼-mile Bexleyheath Line on 1st May 1895. The name "Well Hall" derived from that of a former Tudor mansion, which resided on a site surrounded by a moat, located 160-yards north of the station. The mansion was demolished in 1733, save for a barn, and replaced by a smaller property located outside of the moat.

The Bexleyheath Line was double-track from the outset and, except for the layout at Barnehurst, stations along the route were built to the same standard design. Well Hall was located exactly nine miles from Charing Cross upon an 86-chain curve, descending at 1 in 120 in the London direction. The station building was located on the London-bound platform and was a familiar SER design, being a single-storey timber structure with a hipped slated roof, the main part of which was 60-foot length . Attached to the building was an arched-roof platform canopy with clover-patterned valance, a style which is still evident today at Paddock Wood. The "down" platform was equipped with a timber shelter sporting a backward-sloping curved roof; happily, an example of this design is still in use today at Welling.

A small goods yard was situated behind the London end of the "up" platform, comprising two sidings, one of which terminated at a "dock" platform. In the earliest years, a trailing crossover between the running lines was evident within the limits of the platforms. The layout was controlled from a signal box positioned beyond the London end of the "down" platform; this was the product of contractor "McKenzie & Holland", which signalled the Bexleyheath Line. The design of the cabin at Well Hall was repeated at all those stations which opened with the route in 1895, and examples can be seen on the website's Barnehurst and Bexleyheath pages.

By 1908, Well Hall had acquired a footbridge between the platforms, east of the main building and waiting shelter. A track foot crossing for staff remained in place, this of which was situated roughly midway down the platforms and required climbing on small steps to access. A second trailing crossover between the running lines had been installed 50-yards east of the platforms, and the goods yard acquired a further two sidings and a shed (although, as per that at Bexleyheath, rails did not pass through it). More significant was the opening of "Shooters Hill & Eltham Park" station, a mere 41-chains to the east of Well Hall. Ultimately, the later station was intended as a replacement for Well Hall, allowing the SE&CR to close the original site, but legal problems prevented this, as noted in 1973 by Alan A. Jackson in Semi-detached London: Suburban Development, Life and Transport, 1900-39:

"The railway company, ever anxious to turn the odd penny, had planned to close [Well Hall] until they discovered they were under a statutory obligation to keep it open and so did not rate their chances of overcoming the opposition very highly."

From 1st October 1916, the station was known as “Well Hall and North Eltham”. In 1927, yet another renaming occurred, the Southern Railway designating the site as “Eltham (Well Hall)” from 26th September. On the Dartford Loop Line via Sidcup existed “Eltham & Mottingham” station; this was subsequently renamed plain “Mottingham” on 1st October of the same year. Sometime between these two renaming occurrences, the goods yard acquired a five-ton crane.

In the meantime, the Bexleyheath, Dartford Loop, and North Kent Lines were electrified using the SR’s favoured 660-Volts DC third rail system. Temporary public electric workings operated down all three routes between 10th and 16th May 1926 inclusive, as a result of the General Strike, steam-hauled passenger trains briefly resuming afterwards. Electric services ran again from 6th June 1926, and the full suburban electric timetable through to Dartford commenced on 19th July 1926.

Further modernisation was the order of the day in 1931, when stations at Bexleyheath, Welling, and Eltham (Well Hall) were rebuilt. All three acquired a new main building, replacing the SER timber structures on their “up” platforms. The same design came into use at all three stations: a single-storey red brick structure with a hipped tiled roof, complemented with an upward-sloping canopy with plain valance. Single-storey they may have been, but these were substantial main buildings for these intermediate stations, extending for 145-feet in length, with widths of 20-feet and 25-feet at their narrowest and widest points respectively. It will be noticed on those structures which still survive at Bexleyheath and Welling that their wider, 25-foot portions also demonstrate a higher hipped roof section. Notable survivors of the 1931 rebuilding at all three stations mentioned were the SER timber waiting shelters. At this time, Well Hall gained concrete lampposts with the SR’s trademark hexagonal lampshades. The SR also re-faced the platform sides with prefabricated concrete supplied by their factory at Exmouth Junction, Devon.

On the morning of 14th November 1944, a V2 rocket impacted a site on Sherrard Road, just 80 yards to the south of Well Hall station’s main building. Your author surmises it was during this incident that the “up” side platform canopy was damaged. This occasion aside, the station survived the war years intact.

As part of British Railways’ ten-car suburban train scheme, which aimed to boost capacity on South Eastern Division commuter lines, Well Hall’s platforms were lengthened at their eastern ends in 1955 using prefabricated concrete components. This took the platforms beyond the bridge which carried the running lines over Well Hall Road, and a new entrance was opened between the latter and the station’s “down” platform, by means of a staircase upon the embankment. Well Hall Road had accommodated a tramway route until July 1952, when all such services within London were withdrawn.

Decline at Well Hall started when the goods yard ceased to handle coal traffic, in December 1964, followed four years later by the withdrawal of public goods facilities on 7th October 1968. Another steam-era system to go was the mechanical signalling, semaphores and the cabin going out of use on 14th March 1970, when four-aspect colour lights, controlled from a temporary panel at St Johns, came into use. The Bexleyheath line became fully track-circuited at this time and, in the same year, a check rail was laid west from Well Hall station, along what was known as the “Well Hall Curve”. The latter had a twelve-chain radius, curving sharply to the right after Well Hall station for the 1 in 75 descent towards Kidbrooke, and had a permanent speed restriction of 20 MPH.

On Sunday 11th June 1972 at 21:36, disaster struck. A ten-coach excursion train, the 20.05 Margate to Kentish Town, hauled by Brush Type “4” No. 1630 (latterly Class 47 No. 47048), came off the rails. It had entered the 20 MPH-restricted Well Hall curve at an estimated 65 MPH. The incident resulted in four fatalities on site, including the driver, with two further passengers dying of their injuries months later. The cause of the crash was concluded to be intoxication of the driver.

In the Electric Railway Society Journal in 1981, the following was reported:

In that year, the Greater London Council (GLC) published proposals for the “Rochester Way Relief Road”, today known as the “A2”. A concrete-lined cutting accommodating a dual-carriageway was envisaged, this of which would run parallel with the Bexleyheath Line for about a mile in the vicinity of Eltham, before passing under the railway at Well Hall. The scheme required the demolition of Well Hall station, for it partially resided on the site required for the trunk road, but also gave rise to the closure of Eltham Park station and the provision of a brand new set of platforms in-between the two. It was suggested at the time that the closure of both existing Eltham stations and the provision of a new, single set of platforms would save British Rail £45,700 (£158,400 at 2018 prices) per year in operating costs. The closure of Eltham Park in connection with the road scheme was formally approved on 26th March 1984.

Closure of Eltham Well Hall and Eltham Park stations was scheduled for Saturday 2nd March 1985, when the new platforms east of the former would be brought into use with a huge interchange with bus services. Poor weather hampered construction and pushed back the commissioning of the new station, both the existing sites lingering on until Saturday 16th March 1985. The last train to call at Eltham Park and Well Hall stations was the 23:43 Charing Cross to Dartford. Whilst the original main building of 1908 and sections of platform remain in evidence today at the former site of Eltham Park, at Well Hall not a brick remains. 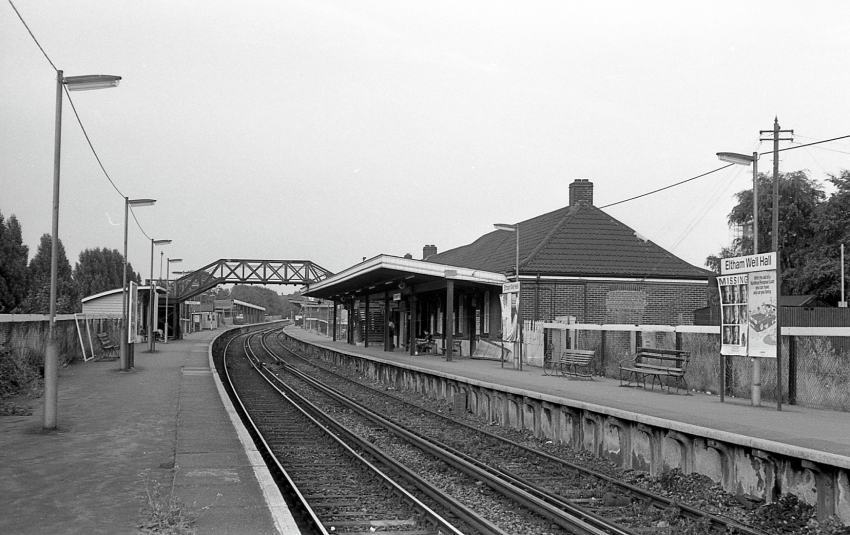 Eltham Well Hall is seen in this Dartford-bound view less than a year before closure. In the background can be seen the structures of the replacement station, today's "Eltham", taking shape. The overgrown area behind the fence on the right was formerly the goods yard. The station comprised a hybrid of structures: a main building from 1931, a waiting shelter from 1895, and a footbridge from about 1907. Between the footbridge and the new station structures, on the left, can just been seen the exit from the "down" platform to Well Hall Road. The "up" platform still had vintage style benches, and it is evident that a window had been bricked up in that wall of the main building nearest the camera. © David Glasspool Collection