A second railway network, again comprising a narrow gauge double-track line, ran from the jetty to the mill. This was elevated upon a steel structure and was dedicated to the transportation of coal from ships to the mill's boiler house. It used a rake of wagons on an electrically-driven cable system, which took coal from a 100-foot-high unloading tower on the jetty and subsequently dumped this into hoppers.

The third railway network, of which arguably this section focuses on most, is that of the mill's standard gauge line. This began to develop over the five years subsequent to the complex's opening and was physically connected to the branch from the North Kent Line. Initially, the mill had just one steam locomotive, originally built by Orenstein and Koppel in Drewitz, Germany, in 1906. However, the locomotive could not produce its own steam; it was fireless. This was a traditional-sized industrial engine, of 0-4-0 wheel arrangement, but the innovative ''fireless'' concept meant it was ideal for paper mills, eliminating the fire risk posed by standard steam engines' hot ash. In brief, steam which had already been pressurised would be pushed into the main reservoir (which was in place of a traditional boiler) and power the locomotive's mechanics, these of which worked on exactly the same basis as a typical steam engine. The Koppel locomotive was joined by a second fireless engine in 1917. The latter had been built by Andrew Barclay of Kilmarnock, East Ayrshire, Scotland, and was purchased second-hand from the Royal Ordnance Factories. Both locomotives were charged with steam at a pressure of 160 lbs per square inch and could work up to three hours before re-charging was required.

Mention should also be made of another resident of this part of the Thames at Greenhithe, that of Thames Nautical Training College HMS Worcester. This originally opened at Blackwall Reach on 4th August 1862, upon a converted Royal Navy vessel loaned from the Admiralty. Eighteen cadets entered the college in this month, each paying 35 guineas (£3,063 at 2014 prices) a year to attend. By September, cadet numbers had increased to 22 and, by July of the following year, this figure had further grown to 54 individuals. Numbers entering the college was on a steady increase, but a change of location was afoot: on 8th September 1863, HMS Worcester left Blackwall and was subsequently towed to a new mooring at Erith, where it remained for the most part of six years. Previously, from July 1863, the cadets enjoyed a swimming pool built within the hull of the ship – indeed, at this time there were no onshore premises owned by the college.

The mooring at Erith was relinquished in June 1869, when another change of location took the college to Southend, where HMS Worcester was stabled at the end of the 1⅓-mile-long pier. This was a somewhat short-term affair, for in the autumn of 1871, the ship was once again towed to a new, and what would ultimately become the final, mooring: that at Greenhithe.

By 1876, the college had expanded to the extent that it was accommodating nearly 150 cadets; the committee came to the conclusion that a larger ship was required. Again, the Admiralty was approached for the loan of a vessel of greater capacity, and in 1876 the college took charge of the ‘’Frederick William’’, a 110-gun ship which had been made redundant by the advent of iron-hulled vessels. The ship was renamed "Worcester" and moored at Greenhithe, in front of Ingress Abbey's gardens, in 1877.

Now back to railway matters of the paper mill, which had been taken over by "Associated Newspapers Limited" in 1922 and renamed "Empire Paper Mills". The Whiting Cement Works closed in the late 1920s, which resulted in the railway connection between Greenhithe Town Wharf and the paper mill being lifted, although the latter's link with the North Kent Line remained. It was also during this decade that the 24-inch gauge electrically-powered endless cable railway at the mill ceased to function. By this time, the mill possessed six rail-mouted steam cranes which ran on the standard gauge tracks; these were used on the main jetty to unload materials from ships and could also be found handling goods within the main mill complex. Finally, the mill's standard gauge network received a southward extension of about 260-yards circa 1929, when a track was laid to a paper store warehouse. This had been built to house newsprint imported from Newfoundland, Canada, after the mill's owners purchased the "Anglo Newfoundland Pulp and Paper Mill Limited".

During World War II, the paper mill experienced a downturn in production, partly as a result of raw materials becoming scarce, but also because air raids, particularly at night, forced part time working. Hundreds of tons of ration paper was made at the mill during the war years and, perhaps more interestingly, sections of fuel tanks for fighter aircraft were also manufactured. Of the latter, these were the long-range extender fuel tanks which were affixed to the underside of each wing of aircraft. The front and rear tapered sections of these tanks were made at Empire Paper Mills, whilst the central section was produced at Edward Lloyd's Paper Mill, Sittingbourne.

Before moving on futher, a quick update on the Thames Nautical Training College is in order, if only brief. In 1938, the former tea clipper Cutty Sark arrived at Greenhithe, having been moved from its previous location in Falmouth, Cornwall. It was moored alongside the Worcester, becoming an appendix of the college until the advent of World War II, when the operation was transferred to land-based premises at Foots Cray Place, a mansion house near Sidcup, Kent. Both ships remained docked at Greenhithe for the duration of the conflict, the Worcester being used by the Royal Navy as a training vessel for the duration, whilst the Cutty Sark was still visited by college cadets. After the war, it was deemed that both ships were in dire need of overhaul. The decision was taken to return the existing Worcester (formerly named ‘’Frederick William’’) to the Navy, from which it was still on loan, and a replacement vessel was sought in 1946 in the form of the iron-hulled "Exmouth". As for the Cutty Sark, this was gifted to the Natonal Maritime Museum, subsequently being preserved in a dry dock in Greenwich.

In 1952, Empire Paper Mills was bought by Albert E. Reed. A series of improvements to the site were made to modernise the mill, which included adding new drives to all the machines. As far as the railway network was concerned, change began in about 1958 when the connection with the North Kent Line ceased to be used. The cutting was subsequently reused, at least in part, for an access road to the then new Merchant Navy Training College. The latter was built immediately to the west of Ingress Abbey and, on opening in 1968, replaced the Thames Nautical Training College upon HMS Worcester. However, the vessel remained at its Greenhithe moorings until 1978, when it was towed down the Thames and across the Channel for scrapping in Belgium.

There was a variety of motive power changes on the paper mill's internal railway network in a short space of time. The fireless locomotives were joined in 1967 by a traditional steam engine comprising its own boiler and firebox. Built in 1935 by Peckett & Sons of Bristol, numbered 1880 and named "Nelson", this locomotive was purchased from Aylesford Paper Mill, but its tenure at Greenhithe was brief, the engine being scrapped in 1969. Diesel traction started to creep onto the scene in 1968, the first such locomotive being a second-hand shunter built by Andrew Barclay & Sons. This was joined in 1970 by a Ruston & Hornsby diesel electric shunter purchased from a paper mill in Darwen, Lancashire. Finally, the internal combustion ensemble was completed by the arrival of two more Ruston & Hornsby diesel electric shunters in 1971, which had become available after the closure of the New Northfleet Paper Mills, located two miles to the east.

Diesels having arrived in force, the fireless locomotives were taken out of service and scrapped in 1971. The Andrew Barclay & Sons shunter, which had arrived in 1968, was found to be very unreliable and it, too, was scrapped in 1971, the trio of Ruston & Hornsby diesel electric shunters continuing to work the yard well into the following decade.

The beginning of the end was signalled in 1988, when Reedpack Ltd, the owner of the Empire Paper Mill, announced 120 redundancies at the site. At that time, the workforce totalled 493, based on a site of 39 acres. The mill closed in 1992, prior to which plans had already been submitted to Dartford Borough Council to redevelop the entire Ingress Gardens area into a housing estate. This included that part occupied by the Merchant Navy Training College, which closed in 1988. Redevelopment work commenced in 1997.

Further recommended reading: The history of Empire Paper Mills 1908-1983 / by Walter Smith. A collection of papers held at Dartford Library. 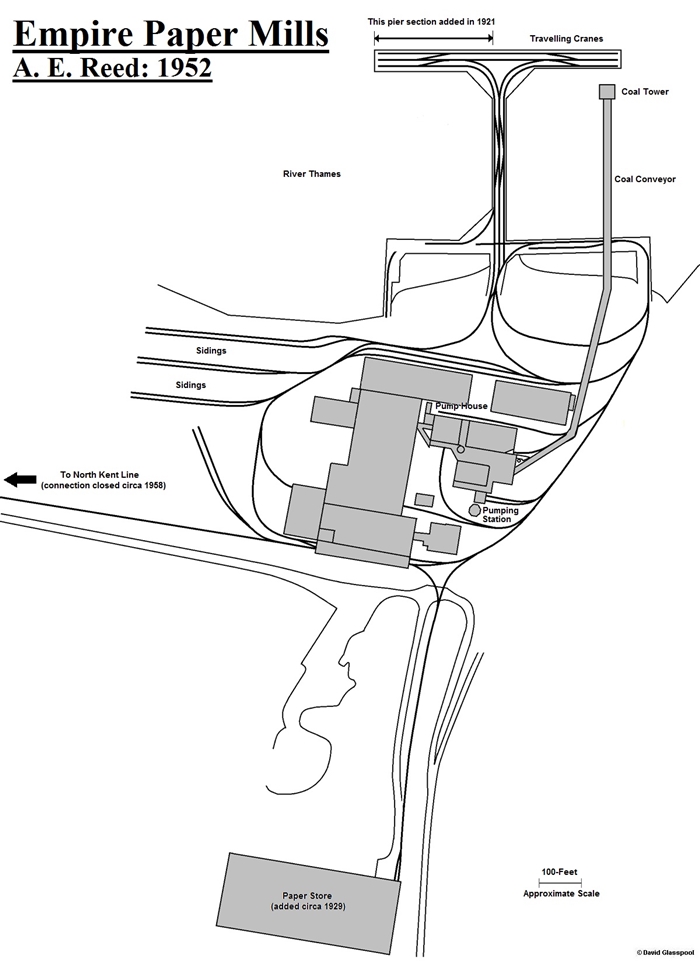 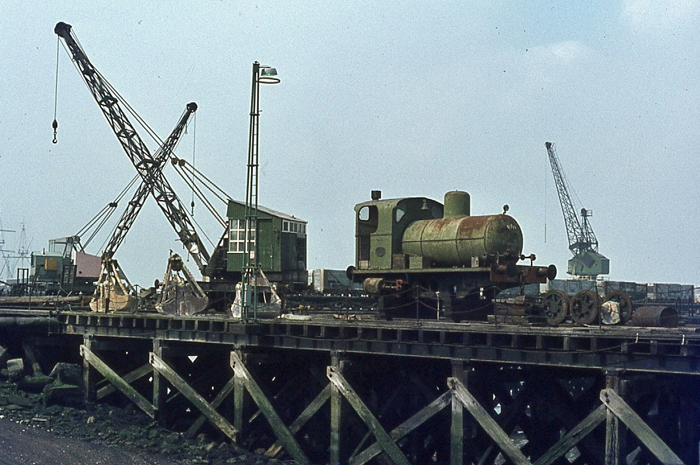 End of the line. Wheels removed, one of the fireless locomotives is seen up on wooden blocks on that eastern arm of the wharf nearest the shore, amongst rail-mounted cranes. The wheels can just be seen in front. On the extreme left can be seen the masts of HMS Worcester. © David Glasspool Collection 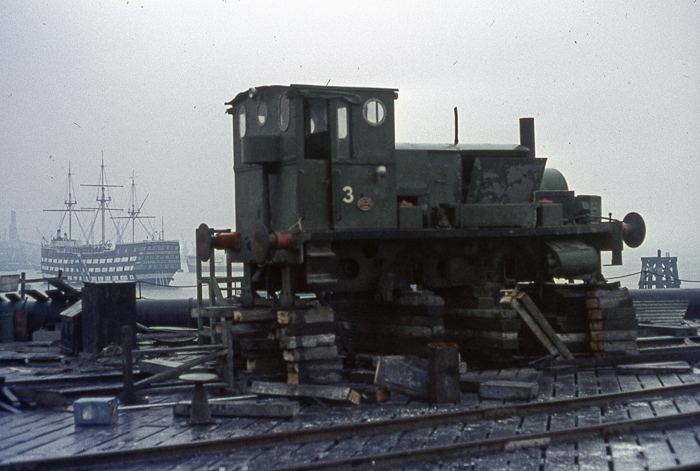 Also without its wheels and upon wooden blocks, we see the shunter which was a cross between a steam and diesel locomotive on the wharf, at the end of its working life. This upstream view of the wharf includes the splendid HMS Worcester, which remained at Greenhithe until 1978. © David Glasspool Collection 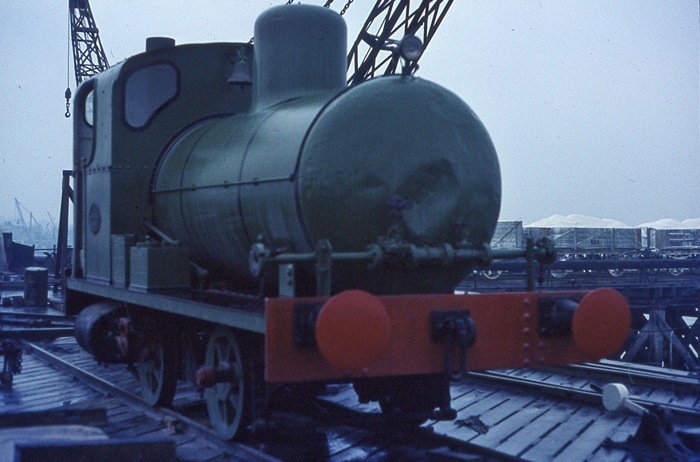 Wagons loaded with china clay can be seen in the background of this view, which shows one of the redundant Andrew Barclay "fireless" locomotives on the timber pier. The connecting rods have been removed and the locomotive has suffered a blow to the front of its reservoir casing. Note the white lever at the bottom right, used for changing the points. © David Glasspool Collection