The South Eastern Railway (SER) started operating passenger services to Folkestone on 28th June 1843, having opened a temporary station at the end of an extension from Ashford. A permanent station, by the name of "Folkstone" (note the missing "e"), opened on 18th December of the same year, on an eastward extension which crossed the engineering feat of the nineteen-arch Foord Viaduct. Services through to Dover started running from 7th February 1844, and on New Year's Day 1849, the Folkestone Harbour branch came into use for railway traffic.

The "permanent" Folkstone station of December 1843 became "Folkestone Junction" in January 1852, reflecting the connection with the Harbour branch. The first engine shed arrangement at the site comprised a brick-built dead-end structure, serving a single track entering from the west. If Ordnance Survey maps of the time are to be believed, this was joined by a second shed building, constructed directly behind (north east of) it, which was also dead-end and served a single track. The pair were sturdy brick-built structures, positioned on the "up" side of the running lines beyond the Dover end of the station, and the north eastern one of these sheds could only be accessed by locomotives which reversed into the Harbour Branch exchange sidings.

As soon as the Joint Managing Committee of the South Eastern & Chatham Railway (SE&CR) was formed in 1899, improvements to engine facilities at Folkestone Junction were made. The pair of sheds dating from the earliest years were demolished, their tracks being absorbed into the spaghetti of sidings which had developed around the junction, and a new depot established on the opposite side of the running lines. The latter was a north east-facing dead-end structure, being brick-built with a slated pitched roof, which accommodated three parallel-running tracks. Attached to the shed's northern side was a water tower of very sturdy brick construction, and the shed tracks were accessed by a trailing connection with the "down" main line.

The shed was coded "19" under the SE&CR's depot numbering system and, from the outset, became synonymous with the tank engines used for banking heavy boat trains up the fierce 1 in 30 gradient from Folkestone Harbour. The locomotive allocation comprised James Stirling's "R" Class 0-6-0 tanks, twenty-five of which had been built for the SER at Ashford between 1888 and 1898 inclusive. Between 1910 and 1922, thirteen of these shunting engines were rebuilt by Wainwright with domed boilers and were subsequently classed as "R1". A small shed, hosting just a single tank engine, was also present at Folkestone Harbour.

The depot was not equipped with a turntable from the outset, but one had been installed by the end of the SE&CR era. The turntable was of 64-foot 10-inch diameter, located about 55-yards to the north east of the shed building, and had a trailing connection with the "down" main line.

Under the Southern Railway (SR), the shed lost independent status and became subordinate to Dover, presumably when the new, large depot was opened at the latter on partially reclaimed land in 1928. At that time, Dover received an allocation of Maunsell's "Z" 0-8-0 tank engines, which were powerful locomotives designed for heavy shunting in marshalling yards. An economical drive by the SR was briefly pursued, where it was thought that one of these tanks could do the work of at least two "R"/"R1" Class tanks – possibly even four – on Folkestone Harbour branch banking duties. Before this idea could be realised, the swing bridge on the throat of the Harbour station had to be replaced to accommodate the heavier engines, and the curves through the platforms eased, modifications of which were completed in 1930. Folkestone Junction's allocation was set to change from Victorian tank engines to the latest motive power the SR had to offer. However, it was not to be:

"As for the class "Z" tanks, they struggled manfully and as best they could with trial runs of always fewer coaches until it became abundantly and gloriously clear that it was going to take as many of them to carry a boat train up the hill as it did the old 0-6-0s. The Stirling Tanks returned in triumph…." Henry Maxwell, The Railway Magazine, December 1953

On the advent of British Railways (BR), the shed remained sub to Dover and was brought under the latter's then new depot code of 74C in February 1950. The alphanumeric shed code system had been pioneered by the London Midland & Scottish Railway (LMS) and subsequently applied to every region of BR.

In February 1958, boundary realignment saw a series of lines within the Western Region's scope come under Southern Region control, which included engine sheds at Weymouth and Yeovil Pen Mill. With this change came a fleet of "5700" Class 0-6-0 Pannier Tanks, these of which were formally transferred to SR lists in January 1959 and soon drafted to other parts of the SR to replace elderly pre-Grouping locomotives on shunting duties. In that year, Pannier Tank No. 9770 was tested on the Folkestone Harbour branch and, unlike the "Z" Class from the 1930 attempt, the engine proved its suitability for the line. After the trial runs, No. 9770 was allocated to Nine Elms for empty carriage movements, but Dover received an allocation of six of the type: Nos. 4601, 4610, 4616, 4626, 4630, and 4631. A seventh, No. 3633, arrived in April 1960, and all were destined for working the Harbour branch.

Previously, in 1958, Dover's shed code had changed from 74C to 73H, when all remaining South Eastern Division sheds came under the umbrella of Stewarts Lane (73A) in the run-up to electrification. The full electric timetable came into use between London and Dover via Chatham on 15th June 1959, but steam on the ex-SER lines via Ashford continued for a few more years. Electric working to existing steam timings between Charing Cross, Cannon Street, and Dover, via Tonbridge and Ashford, commenced on 12th June 1961, which marked the closure of sheds at Dover and Folkestone Junction. The full accelerated electric timetable came into operation on 18th June 1962. After demolition, the former site of the engine shed became a car park for an adjacent works.

Transitional year at Folkestone Junction, with electrification works in full swing. The section of track highlighted in red approximates the former site of the previous engine shed buildings. © David Glasspool 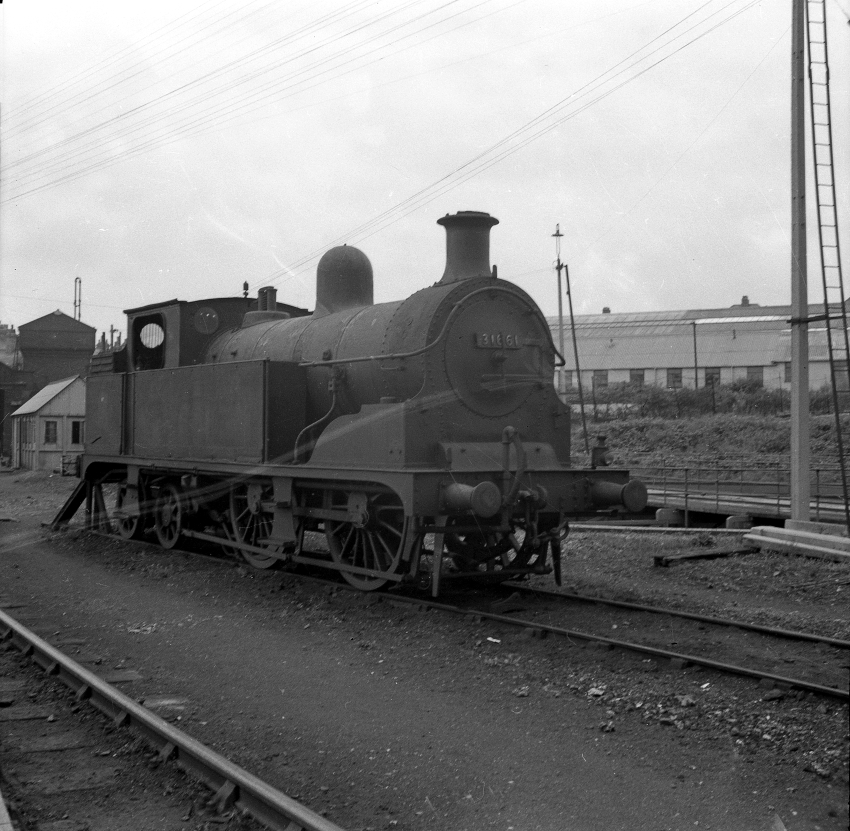 This view is from about 1955 and depicts ex-LC&DR "R" Class No. 31661 around the time of the locomotive's withdrawal from service. To the right of the engine is the turntable, whilst in the background, to the left, can be seen the water tank of the shed building. © David Glasspool Collection 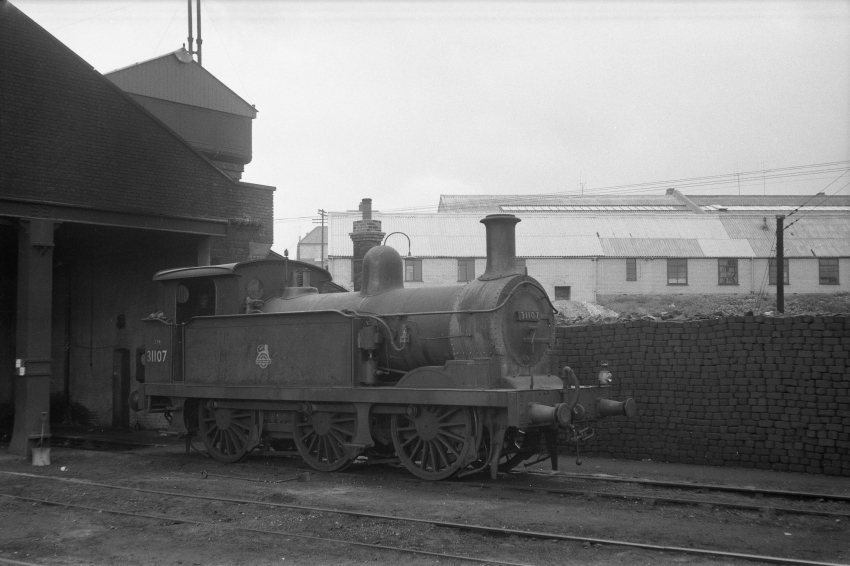 "R1" Class 0-6-0 No. 31107, with "pagoda" style cab and early BR "Cycling Lion" crest, is seen stabled on that shed track furthest away from the running lines. Note the water tank, behind the facade of the shed, which was host to a pitched roof. The shed was at milepost 71 from Charing Cross via Tonbridge and Ashford. The "down" platform of the adjacent station extended right alongside the depot and is from where this photograph was taken. No. 31107 was withdrawn little under two years after being seen above, having been ousted by the Pannier Tanks acquired from the Western Region. The large building in the background encompassed joinery and eletroplating works. © David Glasspool Collection