Located at the very tip of the freight-only branch line from Hoo Junction, the origins of this aggregate terminal lie with the Channel Tunnel construction programme. In 1986, TransManche Link (TML), the consortium formed to build the Channel Tunnel, awarded a contract worth £6,200,000 to Foster Yeoman to supply the vast quantities of aggregate required for the tunnel linings. In conjunction with this, a tender worth £9,000,000 was won by Blue Circle to provide the cement required for the operation, supplied by its large works in Northfleet.

In October 1986, TML received approval for the construction of a large concrete works on the Isle of Grain, where tunnel lining segments would be cast. This was upon a site formerly occupied by storage drums belonging to BP's Kent Oil Refinery, which had ceased production in 1982. The site was accessible by both rail and sea, which meant that road traffic movements could be kept to a minimum.

Adjacent to TML's Grain concrete works, Foster Yeoman was authorised to commission an aggregate terminal, again on former refinery land. This was built around a collection of railway sidings which formed the very end of the freight-only branch line across the Hoo Peninsula. The terminal's ultimate source of aggregate supply was the granite "Super Quarry" at Glensanda, Morven Lismore, on Scotland’s West Coast, which Foster Yeoman had started to develop in 1980 and subsequently opened six years later. Glensanda lacked both rail and road access, the site being situated high up in the Scottish Hills, thus all aggregate traffic had to be shipped out by sea. The first shipments were dispatched from the quarry in August 1986, which included large amounts of aggregate destined for Texas, United States.

The first tunnel lining segments were completed by TML on the Isle of Grain in September 1987. Foster Yeoman's nearby terminal started to receive two million tonnes of stone each year, all by sea, most of which was destined for the Chunnel works. When the aggregate was unloaded from vessels, it was conveyed along a 151 metre-long pier to the main site, and subsequently washed and screened at the terminal before being sold on for commercial use.

TML's segment-making plant dispatched its last rail-borne consignment in May 1991, bringing production at the site to an end. Soon afterwards, planning and development for a gas-fired power station on part of the redundant area commenced, but Foster Yeoman's aggregate terminal remained in operation. This has since become the main distribution point for aggregate for the South East England market, and can handle over 2,000,000 tonnes of the product annually. Having also supplied material for the Channel Tunnel Rail Link project through the terminal on Grain, Somerset-based Foster Yeoman was bought out by "Aggregate Industries" in 2006 for £300,000,000. 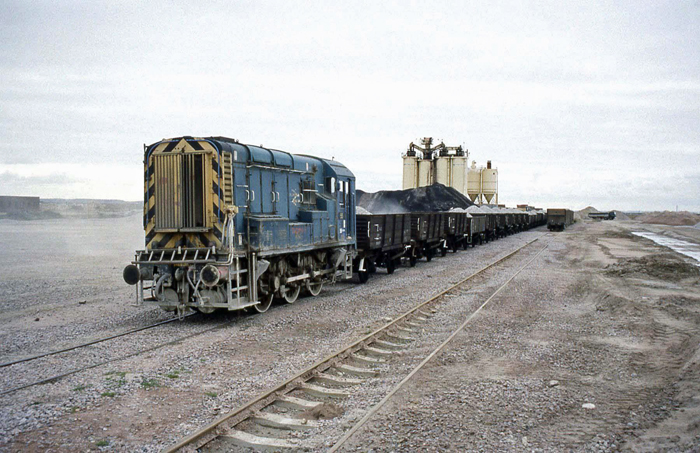 Foster Yeoman No. 55 "Thomas" patiently waits for a long rake of engineers' 2-axle open wagons to be loaded with stone within the terminal. The loco was built at the former Lancashire & Yorkshire Railway’s Horwich Works in 1959, entering service as D3817, renumbered to 08650 in 1973 under the TOPS scheme, and eventually being withdrawn from BR service in 1989. © David Morgan 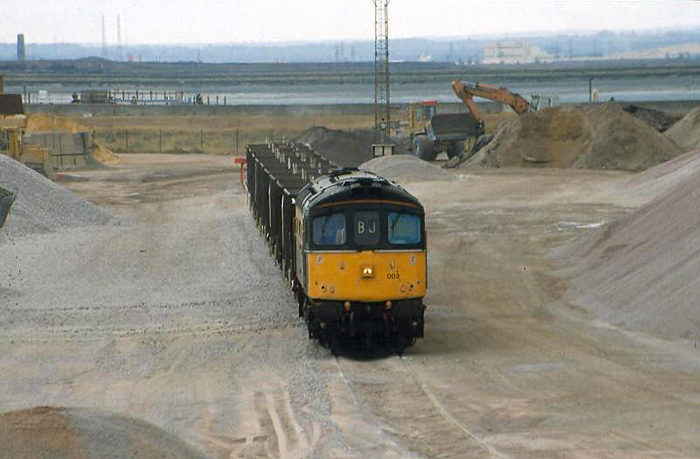 Dutch-liveried Class 33 No. 33002 is seen at the eastern-most extremity of the line across the Hoo Peninsula, within the aggregate terminal, awaiting its train of wagons to be loaded. The red buffer stops can just be seen emerging from behind the rear of the formation, the track thereafter to the former Port Victoria station site having since been lifted. The derelict wooden struts of Port Victoria pier are still in existence: they are positioned out of view in the above picture, to the left of the jetty seen in the background, and emerge at low tide. As for No. 33002, the locomotive managed to last in private EWS ownership for a year, being withdrawn in February 1997. The locomotive finally found a permanent home in preservation at the South Devon Railway, arriving there in January 2005. © David Glasspool Collection