To a railway passenger from 1858, there would be nothing recognisable at today’s Gillingham station. Subsequent expansion and rebuilding of the layout has eliminated virtually all traces of the original arrangement. Once, however, this was a modest rural affair comprising standard EKR buildings and two platform faces, set around a double-track formation upon a gentle curve. The station opened with the line between Chatham and Faversham on 25th January 1858 and was known as ‘’New Brompton’’ from the outset. The name derived from a northern hamlet within the Parish of Gillingham – the original village of Gillingham resided about a mile to the east of the station.

The main building was situated on the ‘’down’’ platform and was a variation of the design used at Farningham Road, Adisham, and Rainham stations, to name but a few. These were tidy two-storey-high structures, fabricated from the EKR’s favoured crème brickwork, with slated pitched roofs and sturdy chimneystacks. From a very early stage, many of these buildings had the external brickwork of the upper floor rendered and painted white, a finish which can still be seen on a number of the structures which survive today. Incorporated within these houses were both the booking office and the Station Master’s residence (the New Brompton Station Master in 1862 was recorded as one Mr Barratt). In addition, a single-storey appendix attached to the eastern side of the building at New Brompton housed Gentlemen’s toilets. A timber waiting shelter was provided on the ‘’up’’ side and passage between platforms was by means of a track foot crossing. A level crossing existed about 450-yards to the east and beside this, on the ‘’down’’ side of the running lines, could be found a house for the Crossing Keeper. This was built to a standard design, with identical examples also coming into use at a number of crossings between here and Faversham.

A goods yard was established on the ‘’down’’ side, to the east of the station. This comprised two eastward-facing sidings trailing off the ‘’down’’ line, one of which terminated behind the platform, just before reaching the station house. The second passed through a 45-feet-long goods shed, the latter of which was brick-built and comprised a slated pitched roof.

Single instruments were employed on the line between Chatham and New Brompton for the transmission of messages between these two stations for ‘’up’’ and ‘’down’’ trains. One Mr Rudall was noted in 1862 as being responsible for the electric telegraph along the line. Consideration was given to making use of a separate needle instrument for each line, and at that time, operation between Chatham and New Brompton was in accordance to Rules 20 and 20A.

20: Every train or engine, without exception, must be telegraphed in its progress between station and station, and the times of forwarding and receiving code messages relating to it duly entered under the respective headings in the train signal-book supplied for that purpose. In order to carry out this rule, the station-master must arrange so that some person is always in the office to attend to the telegraph from the departure of the first train in the morning until the arrival of the last train at night.

Constant attendance in the office and prompt attention to calls on the instrument are essential to the efficiency of the telegraph without which it cannot be depended upon. Any remissness on the part of the clerks or persons appointed to attend to the telegraph will be strictly dealt with.

20A: No train or engine is to be allowed to pass or leave a station, up or down, until the due arrival of the preceding train or engine has been telegraphed back from the next station, to ensure the line being clear.

An Act of Parliament dated 27th June 1876 authorised the construction of a branch line to Chatham Dockyard. Opened on 16th February of the following year, it was single-track, 1-mile 63-chains long, and made a trailing connection with the ‘’down’’ sidings of an enlarged goods yard, about 300-yards east of the platforms. A signal box was also opened within the fork of the junction between the branch line and the goods sidings. This was followed in 1884 by plans for an engine shed to be built on the ‘’up’’ side of the line, on a large site between the station and level crossing. This was a substantial brick-built structure, 255-feet-long by 50-feet-wide, with a slated pitched roof. Opened in 1885, it housed three westward-facing dead-end tracks. Attached to its northern elevation were stores, offices, mess rooms, and a three-storey-high water tower. Locomotives could be rotated on a 50-foot turntable located 155-yards west of the shed.

During this time, alterations had also been made at the station. A footbridge was erected immediately west of the main station building, linking both platforms with a footpath on the ‘’up’’ side. The platforms had also been subject to extensions at both ends, and the ‘’down’’ side goods shed had gained a small canopy along its northern elevation. The yard had also acquired a 5-ton crane by this time. In May 1886 the name boards gained a suffix, the station becoming ‘’New Brompton (Gillingham)’’. The station became plain ‘’Gillingham’’ from 1st October 1912. 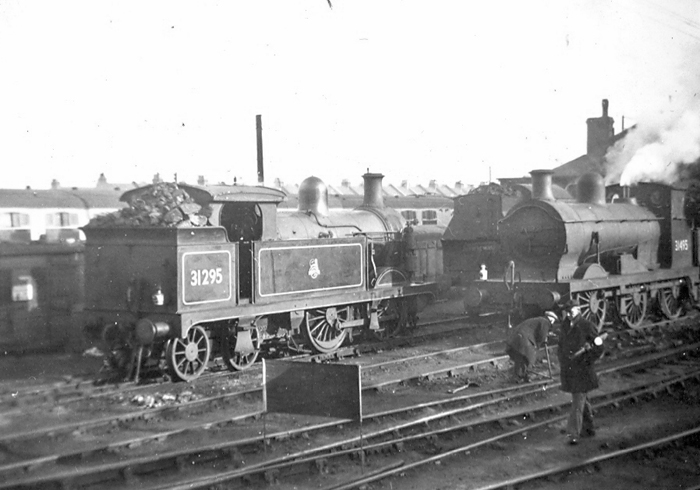 The coal bunker of "H" Class No. 31295, wearing early BR "Cycling Lion" crest, is packed to the height of the cab roof in this view at the western end of Gillingham shed. In front of No. 31295 can be seen the bunker of an Ivatt "Mickey Mouse" Tank, whilst alongside is "C" Class No. 31495. Blood and Custard coaching stock can be seen in the background. © Barry Diplock, courtesy of Bob Poole 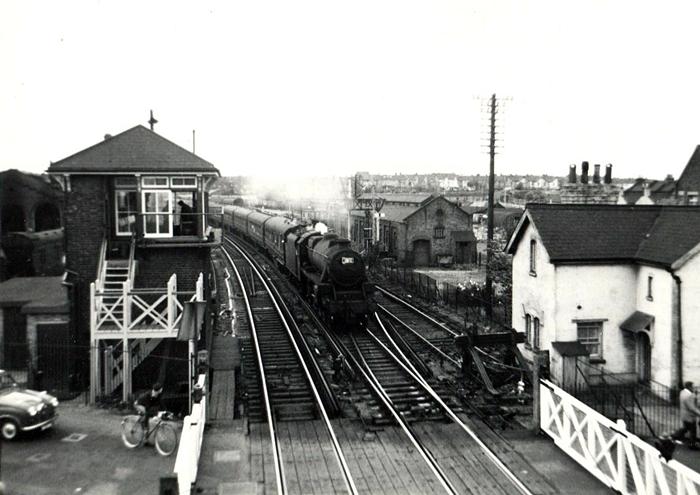 A ''Black Five'' is seen approaching the level crossing, fronting an inter-regional express of ex-LMS carriage stock. Note the traditional lattice crossing gates and, on the right, the whitewashed Crossing Keeper's cottage. On the left is the 1913-opened ''B'' Box. Behind this can be seen the end of the engine shed and an ex-SE&CR ''Birdcage'' carriage. The pitched roof brick building, situated to the right of the running lines, was once the railway stables, and was demolished in the 1970s. © Roger Goodrum Collection 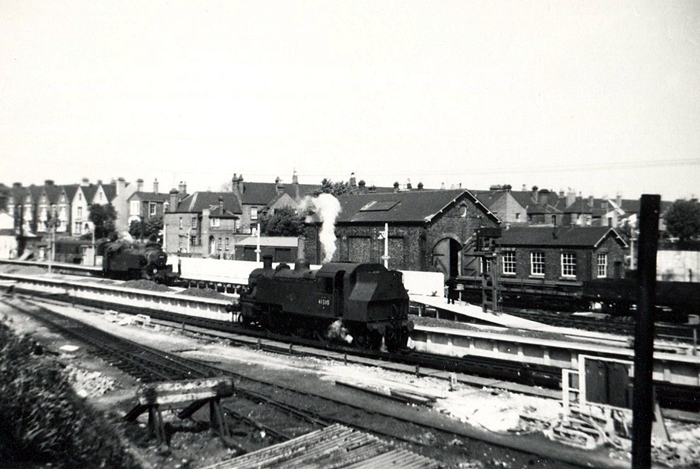 Electrification works are in full swing in this view, both platform surfaces being in the process of receiving prefabricated concrete extensions at their eastern ends. The goods shed can be seen at the back, whilst in the foreground are the entry lines to the engine shed. Two ''Mickey Mouse'' Ivatt Tanks are in view, that nearest the camera being No. 41310, which was at this time allocated to Faversham. © Roger Goodrum Collection 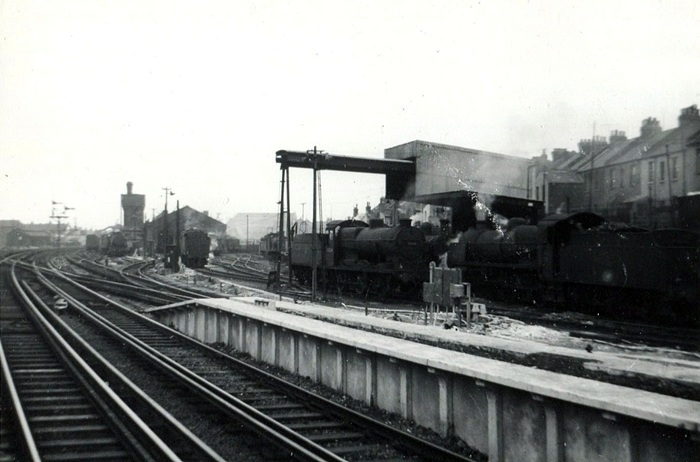 An eastward view from the ''down'' platform shows plenty of steam activity. The engine shed can just be seen in the background, alongside which is the prominent water tower. The contraption straddling the engines just right of centre is the 1955-installed coal gantry, around which can be seen ''Q'' and ''N'' Class engines. Note that the extension of the island platform has yet to be in-filled. © Roger Goodrum Collection