Sadly, this was one of many stations vandalised by its owner, British Rail, to the extent that just a footbridge of the previous site remains in existence. Consequently, today, Godstone is a barren station. Until recently, glazeless bus shelters added to an atmosphere of general dereliction. Once, however, this was a typical SER rural affair, which was tastefully modernised by the SE&CR early in the 20th Century.

Godstone, perched upon an embankment, was opened with the Reigate Junction (Redhill) to Tonbridge portion of the SER’s trunk line to Dover on 26th May 1842. The station was situated over two miles south of the village it purported to serve, and was 26½-miles from London. Unlike its counterparts along this part of the route, the platforms here were only partially staggered, but a track foot crossing was still in evidence. This was positioned at the eastern end of the ‘’up’’ platform, at the bottom of ramp, and given the staggered nature of the surfaces, intercepted the ‘’down’’ platform at its mid-point. Architecture was standardised along the line, and upon the ‘’down’’ platform could be found the main building. This was a tongue-and-groove timber affair set upon a shallow brick base, as per those structures at Edenbridge and Penshurst. The ‘’up’’ platform was host to a small shelter of similar construction, and both platforms were lined at their rears with timber fencing.

Goods facilities here were extensive from the outset, and sidings spread over the station site for about 900-yards from east to west. On the ‘’down’’ side, behind the platform, could be found a trio of westward-facing sidings. One of these was a short stub which terminated at a dock platform, upon which could be found cattle pens. The yard was also used by local coal merchant ‘’Varnham’’, and in-bound coal wagons would be unloaded at the end of the longest siding behind the ‘’up’’ platform. As was often the case, the goods yard could only be accessed through a reversing manoeuvre, for which a lengthy head shunt was provided, running parallel with the ‘’down’’ running line. To the east of the station, beyond the bridge which took the railway over Eastbourne Road (A22), were a further two sidings. That on the ‘’up’’ side had a trailing connection with the adjacent running line, and was of great proportions. Its sheer size meant that for little under 500-yards in length, the embankment east of the station accommodated a triple-track formation. The second siding could be found on the ‘’down’’ side of the line, about 140-yards in length, and was afforded a trailing connection with the adjacent line.

The first signal box here was a small clapboard timber hut, situated at the eastern end of the ‘’up’’ platform, end-on to the track foot crossing. Identical huts came into use at Edenbridge and Penshurst stations, and these appear to have merely housed the signalman – there were no levers or cables emanating from the cabin. Instead, the track was controlled by manual levers positioned immediately alongside sets of points. In 1893, works were undertaken to re-signal the layout and provide a proper signal box. The task was subcontracted to the ‘’Railway Signal Company’’, which erected an attractive two-storey-high cabin alongside the existing hut at the eastern end of the ‘’up’’ platform. The signal box was built to a standardised design, featuring a brick base, tongue-and-groove upper half, and a slated, gabled pitched roof. A similar cabin was installed by the same company at Penshurst, whilst the signal boxes at Crowhurst Junction South (just east of Godstone station) and Edenbridge were provided by Saxby & Farmer and the SER respectively. The Godstone re-signalling saw the insertion of trailing crossovers between the running lines at the eastern and western ends of the platforms, and the earlier SER signal hut was retained for staff use.

In 1914, the SE&CR commenced rebuilding Godstone station, which sought to eliminate the track foot crossing from passenger use, in addition to providing an improved main building. The SER timber structure on the ‘’down’’ side was flattened and in its place rose a solid single-storey brick building, with a tiled hipped roof and a trio of chimneystacks. Flat-roofed canopies with attractive clover-patterned valances (a design used by the SER in the previous century) extended from the building’s northern and southern elevations. The platforms were, too, extended, reducing their staggered effect. A lattice footbridge was brought into use over the site of the track foot crossing, the latter of which was thereafter retained for staff use. The ‘’up’’ platform became host to a new timber shelter: this was of clapboard construction and built to a standardised design, identical examples having earlier come into use at Leigh Halt. After rebuilding work was completed, remnants of the earlier SER station included the small signal hut on the ‘’up’’ side, and a tongue-and-groove waiting shelter on the ‘’down’’ platform, immediately east of the footbridge. The latter was quite possibly the original ‘’up’’ side shelter transferred to the ‘’down’’ platform – Ordnance Survey maps certainly concur with this.

Enter the Southern Railway. In fact, little changed under this company’s auspices, for when it was formed in 1923, Godstone existed as a modern rebuild of an earlier Victorian station. Indeed, the SR’s trademark Swan Neck gas lamps, complete with ‘’Target’’ name signs, appeared, but this still remained very much an SE&CR station. Thus, it was left to British Railways to implement the most drastic alterations at the site, and severe these were indeed. Minor cosmetic changes involved the replacement of ‘’Target’’ name signs with BR ‘’Totems’’. The first significant economies were made on 4th May 1964, with the closure of the goods yard behind the ‘’down’’ platform. Then, in November 1967, Godstone became an ‘’open’’ station, no longer being staffed – steam haulage had earlier ceased in January 1965. Much worse was to come in 1971, when all platform structures – bar the footbridge – were razed to the ground. Soulless rectangular glazed bus shelters came into use on both platforms, but at least the signal box of 1893, plus semaphores, remained to break the boredom. At the same time, the SR’s Swan Neck gas lamps were taken down and replaced by electric lighting. 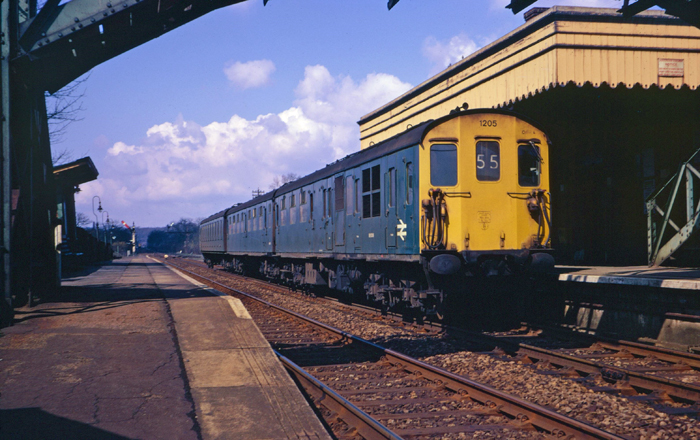 A westward view, including 3R "Tadpole" unit No. 1205 on the 09.22 ex-Reading General, provides a glimpse of the SE&CR station structures of 1914. The platforms were still adorned with SR-style swan neck gas lamps at this time. The "up" starter signal in the background is an SER timber post which, at some stage, has been modified with an upper quadrant arm. In the following year, the main station building and waiting shetler were demolished, the footbridge and signal box being left standing. As for "Tadpole" No. 1205, this remained in service until 1982, having originally been introduced to the route in 1965. © Tom Burnham 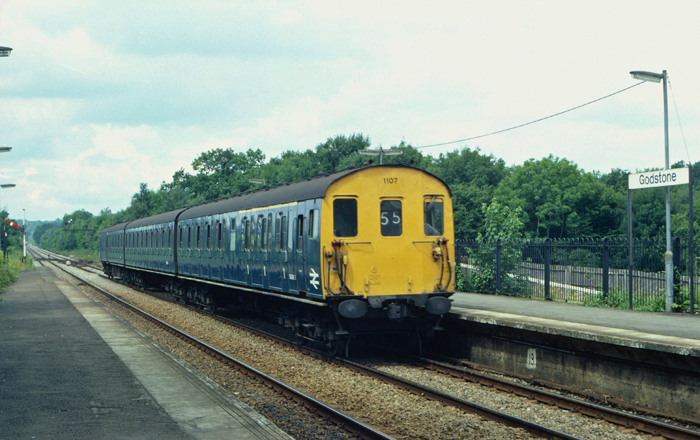 "Hampshire & Berkshire" DEMU No. 1107 is seen arriving on the 10:26 from Reading, Tonbridge-bound. The main buildings and Swan Neck gas lamps had gone, but a nice complement of semaphore signals remained. On the left is the "up" starter, which since the previous photograph had become a tubular post with the arm mounted half way up, at about the same height as previously. © Tom Burnham