This station had a somewhat brief working life, enjoying a passenger railway service for just ten years before closure. A small, single-storey brown brick structure, formerly the main station building, still exists as the last remnant of this short-lived site. However, whilst today there still remains an interesting collection of sidings on the Isle of Grain, primarily to serve Thamesport and an aggregate depot once operated by "Foster Yeoman", to the untrained eye it is difficult to picture a railway station having ever been here.

The station's origins are with the Anglo-Iranian Oil Company, which examined four sites in the Thames Estuary area for the construction of a refinery in the late 1940s. The ideal scenario was to find a large enough area of land suitable for construction, which was of no great farming importance and was accessible to large vessels even at the lowest of tides. The marshes of the Isle of Grain were identified as meeting this crieria, and the company purchased an area of 2,000 acres, which encompassed the site of Port Victoria station, at the end of the branch line from Hoo Junction.

The entire project was priced at £40,000,000 (£1,236,000,000 at 2015 prices) and refinery construction began in June 1950. Of the 2,000 acres of land purchased, the refinery was to cover 600, and have the capacity to process 4,000,000 tons of crude oil anually. Building work was completed in 1954, this having been hampered by the East Coast Floods of January 1953, which engulfed much of the Thames Estuary. The works had been built under the name of a new subsidiary company created by Anglo-Iranian Oil, called the "Kent Oil Refinery Ltd".

A new railway station, primarily to serve the refinery, came into use on 3rd September 1951, replacing existing sites at Grain Crossing and Port Victoria, 300-yards west and 1-mile to the east respectively, the latter of which had earlier closed on 11th June of the same year. The new station comprised a 650-foot-long island platform built from prefabricated concrete, components of which were supplied by the ex-LSWR works at Exmouth Junction. The platform was lit for its full extent by lamps upon concrete bracket posts, topped off with hexagonal lampshades, but no protection from the elements - not even a small shelter - was provided upon the surface. A small, single-storey brick-built station building was evident at the Port Victoria end of the layout, this of which was linked to the island platform by a level crossing. In spite of this seemingly Spartan arrangement, the track layout here was extensive: as shown on the below diagram, there were seven parallel-running lines at the station site, two of which served the platform. The station's layout was controlled from a two-storey-high signal box, of brick construction and built to the BR standard design of the time, situated at the northern end of the site. A twin-bracket semaphore signal post was erected at the Hoo Junction end of the island platform.

The branch across the Hoo Peninsula was mostly served by push-pull steam-powered workings from Gravesend Central, the majority of these trains terminating at Allhallows-on-Sea rather than continuing onto Grain. Criticisms of the branch line's service focused on the fact that the timings of the trains were not convenient for making London connections at Gravesend. It was suggested that when timetable alterations were made for the electric service to London, no efforts were made to bring the branch trains in line with these. The refinery similarly complained about the frequency and timing of trains along the branch, highlighting that they were not run at helpful times for workers nor visitors. Then, in 1960, came the seemingly inevitable notice by the British Transport Commission of the line's closure. Reportedly, the passenger service cost £25,000 a year to run, with receipts amounting to only half this sum. The last passenger services to Allhallows-on-Sea and Grain ran on Sunday 3rd December 1961.

The redundant signal box at Grain was not demolished until the 1970s, but the island platform lingered on until the mid-1990s before being flattened, leaving the small station building as the last fragment of the long-closed site. In the meantime, the oil refinery had grown in capacity and by 1960, had an output of 11,000,000 tons of refined oil. The works had been brought under the "British Petroleum" brand in 1956. Refining apparatus at the site had its swansong in 1982; by this time, large quantities of refined oil was arriving from the United States. However, storage of oil continued on Grain, and the last rail-borne delivery from the site ran in 1999.

Track plan of Grain station after closure. The grey line marks the boundary between British Rail and British Petroleum. Click the above for a larger version. © David Glasspool 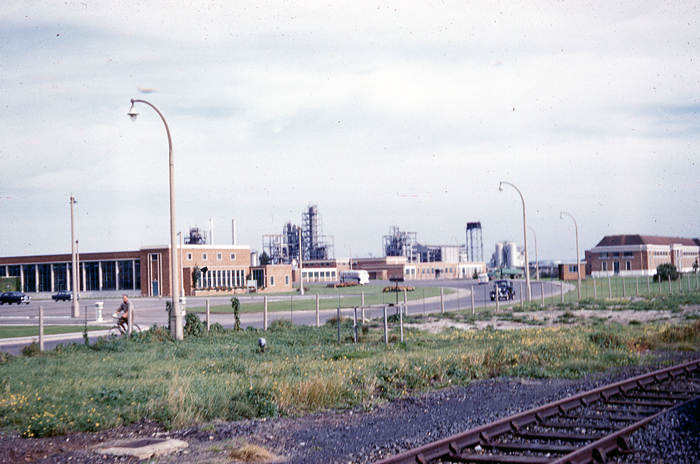 This photograph was taken from the south eastern extremity of the island platform and shows Grain Road curving through brown-brick structures which had been commissioned with the refinery in 1954. © David Glasspool Collection 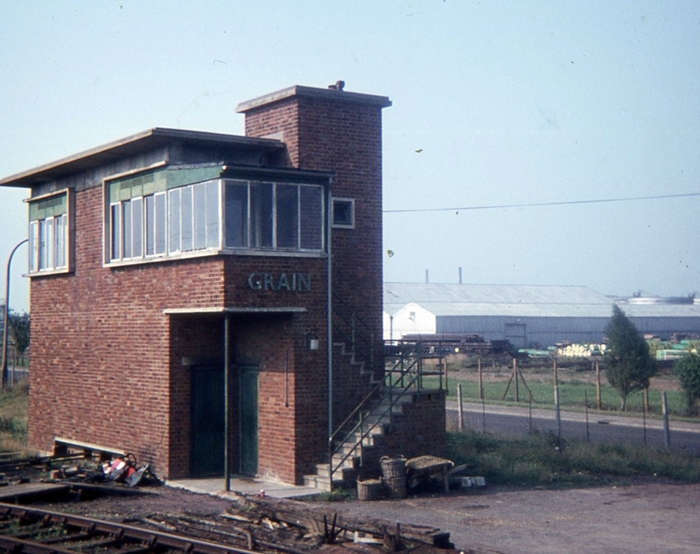 Grain signal box, which controlled the throat of the station built primarily for use by oil refinery workers, is seen not long before demolition. This was built to a standard BR design, a similar example later coming into use at Appledore in 1954. © Roger Goodrum 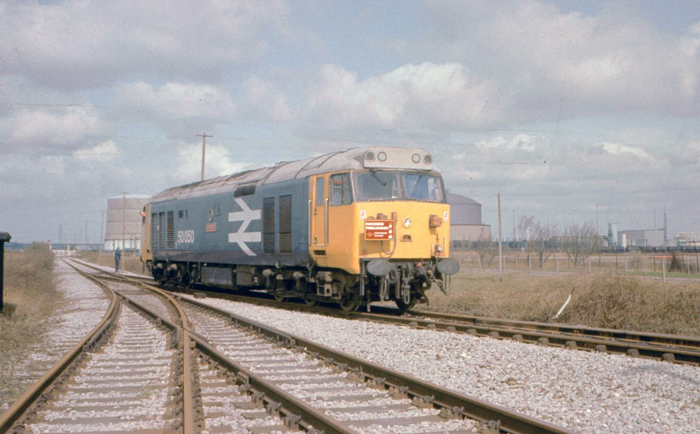 The Grain Branch was a regular destination for charter trains and in this view, Class 50 No. 50050 "Fearless" is seen at the western end of the former Grain station whilst running round the "Dungeness Pebbledasher" charter train promoted by "Hertfordshire Railtours". This particular train had originated from Reading, and following a trip down the Grain Branch it also visited Dover Western Docks, Folkestone Harbour, and Dungeness. In the left foreground is the connection leading into the BP Refinery Exchange Sidings, which saw little use after closure of the refinery in 1982. The gates of Grain Level Crossing can be seen further along the line, whilst in the distance on the far right, a rake of bitumen tank cars can be seen in Yantlet Sidings, which served another part of the BP Refinery. © David Morgan 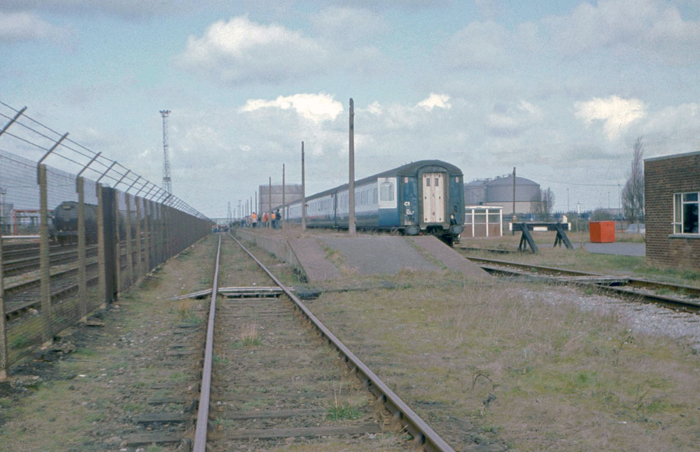 Opened in 1951 as a replacement for Grain Crossing Halt and Port Victoria, the former Grain station platform - seen looking towards Hoo Junction - appears little changed since passenger services were withdrawn in December 1961, although the SR concrete lamp posts have lost their lights and most of the platform coping slabs have been removed, possibly for use elsewhere. Subsequently, the whole platform structure was removed as it presented an obstacle to staff undertaking train preparation and inspection duties. Hertfordshire Railtours' "Dungeness Pebbledasher" charter train from Reading is standing adjacent to the platform whilst the loco runs round. BR infrastructure at the end of the Grain Branch comprised a loop either side of the platform together with a single siding, seen on the right, which for many years was used by "Marcroft Ltd" as a wagon repair siding. A few tank cars can be seen in the BP Exchange Sidings beyond the security fence, whilst on the far right is the end of the brick built former station building, latterly used as a base for shunting staff. © David Morgan 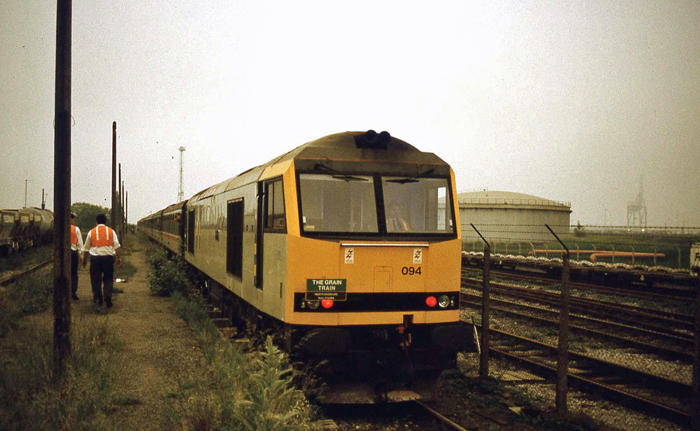 After running round its train, Class 60 No. 60094 "Tryfan" awaits departure from the overgrown Grain station with the late running 1815 (1Z39) to Victoria via London Bridge (Central). Advertised as "The Grain Train" and promoted by Hertfordshire Railtours, this charter train had originated from Euston and eventually reached Grain by way of Folkestone Harbour and Dover Western Docks. On the far left, aggregate hoppers and tank cars await attention from "Marcroft Ltd" in the wagon repair siding, whilst through the fence on the right, a rake of container flats, outstabled from Thamesport, can be seen in the BP Exchange Sidings. © David Morgan 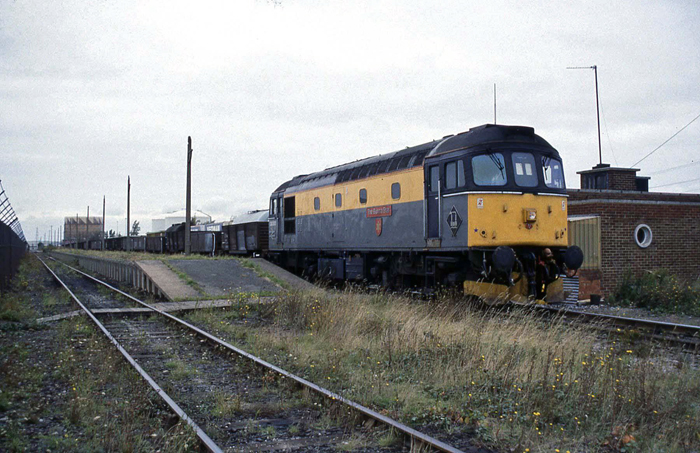 Class 33 No. 33202 "The Burma Star" stands in the former Grain Station with the 0800 (7T62) Tonbridge West Yard to Grain Foster Yeoman Sidings, conveying empty engineers' wagons for re-loading with stone. In the far distance the gate at Grain Crossing can be seen closed across the Grain Branch, whilst to the right of the loco is the former Grain Station building. © David Morgan