The Hoo Peninsula’s first oil refinery was that of Berry Wiggins. Opened in 1932 on the site of a former airship base at Kingsnorth, it had an annual refining capacity of 190,000 tons at its zenith. However, this was to be bettered substantially by a nearby complex owned by British Petroleum (BP). In the late 1940s, the Anglo-Iranian Oil Company secured the Isle of Grain as the proposed site for a huge oil-refining complex, one which would have nearly twenty-four times the annual capacity of the Berry Wiggins operation. Construction began in 1950, with the first crude oil being processed in 1953. From the outset, this complex could refine 4,000,000 tons of crude oil annually, the majority of which was shipped in from the Middle East. Smaller quantities of the product were also delivered from Libya, Nigeria, Venezuela, and South America. In total, there were twelve jetties available to serve sea vessels: nine of these could accommodate the largest oil tankers of the era, such ships being up to 80,000 tons (dead weight). Three jetties served smaller craft, the largest of which were generally 19,000 tons.

The oil industry became the saviour of the Hoo Peninsula branch line. Port Victoria had already been in decline before the closure of its deep-water railway pier in 1916, and the Southern Railway’s 1932-opened spur to Allhallows-on-Sea had never been the lucrative venture originally envisaged. First used to convey Royalty to and from boats, the route’s raison d'être was now to serve oil flows. Furthermore, a new station was brought into use, simply called ‘’Grain’’. A terminus, it consisted of a single prefabricated concrete surface, with a platform face on either side. This replaced the earlier-conceived Grain Crossing Halt and Port Victoria, formally coming into use on 3rd September 1951. There was no form of weather protection in evidence on this platform, but since it was merely used as an alighting point for refinery workers, rather than the general public (although the latter could certainly use it), this was trivial. The station itself was north-westward facing, and its layout was controlled by an all-brick two-storey high signal box, positioned on the ‘’up’’ side, at the London end of the platforms. This was of the typical functional design of the period, near identical examples emerging at Belvedere and Appledore during the same era. Immediately to the west of the station laid four parallel ‘’loading’’ sidings. Here, pipes were suspended above the tracks on gantries; when tanker wagons were stabled underneath, refined oil could be transferred to them. It would appear likely that these rails were not in use from the outset, instead appearing during the site’s expansion (which will soon be touched upon). As of 1970, Britain's oil wells produced 83,000 tons of crude oil, against imports which totalled 101,000,000 tons.

The final day of passenger working along the marshy route, to both Allhallows-on-Sea and Grain, was on Sunday 3rd December 1961, but the refinery had continued to go from strength to strength. Subsequent expansion of this already large complex between 1956 and 1960 increased the annual refining capacity to a staggering 11,000,000 tons (58 times the capacity of nearby Berry Wiggins). During the process, quite a maze of lines had been created between the various oil drums. By 1956, the Anglo-Iranian Oil Company had become BP, and four oil refineries were on offer:

Grain was the largest refinery of those listed, but its sheer size did not prevent its decline. By 1980, large quantities of refined oil was arriving from the United States, and in 1983, the refining apparatus at Grain was deemed obsolete. Whilst refining may have stopped, shipments to the site continued, and the purified product was stored within holding drums before despatch. The last rail oil flow from Grain ran in 1999, but storage drums were retained on the island, despite the sidings being allowed to fall into a state of dereliction. Since, the branch had acquired yet another new lease of life: container flows had commenced along the route in 1990, with the opening of Thamesport, and the former site of Port Victoria station had become a rail-served gravel works. The future of the western-most section of the branch from Hoo Junction had been secure since 1961; in this year, a spur opened to the Portland Cement Works at Cliffe, this of which itself became a gravel operation from 1969 onwards. 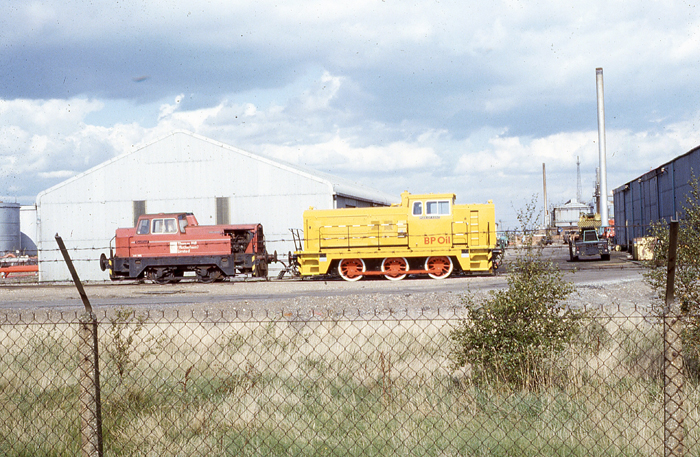 On the right, in BP's all-over yellow livery with red lettering and wheels, is diesel hydraulic 0-6-0 "Man of Kent", which had been delivered new to the refinery in the year of this photograph. The 60-ton shunter had been built by "Thomas Hill" of Rotherham and was equipped with a Rolls Royce engine. After closure of Grain Refinery, the locomotive was moved to BP's Hamble Refinery in Hampshire and was renamed "Hamble-Le-Rice". Its final move took place in 1997, when it was transferred to BP's Coryton Refinery in Essex, a mere eight miles away from its original Grain base as the crow flies. On the left is works No. 10260 Rolls Royce Sentinel shunter, on hire from "TH Kilnhurst" of South Yorkshire. © David Glasspool Collection 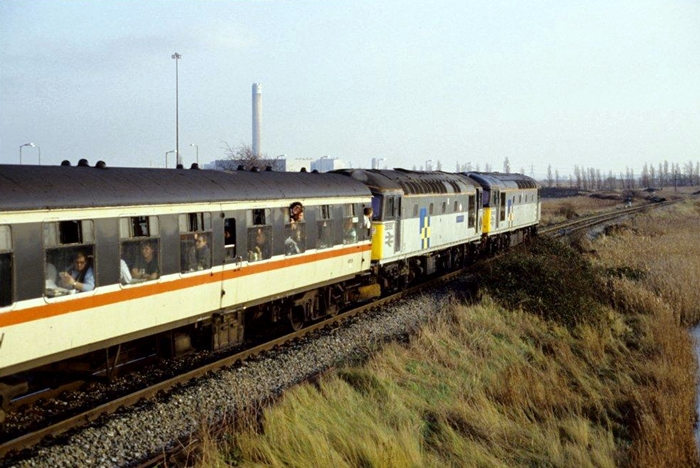 On the way to Grain: Class 33 Nos. 33063 and 33050 ''Isle of Grain'' (with TML logo above name) are seen fronting the ''Crompton Constructor'' rail tour. This ran from Wolverhampton to Dover Western Docks, taking in the Grain and Sheerness-on-Sea branches en route. In the background can be seen Grain power station. © Wayne Walsh