As part of the Kent Coast Electrification Scheme, a series of depots were made available for stabling electric traction. The four-track shed at Ramsgate, originally built by the Southern Railway (SR) for cleaning steam-hauled stock, received third rail in 1959 to house the electric multiple units then being introduced. Similarly, Grosvenor Road carriage shed, alongside the "Chatham" approaches to Victoria, was so converted in 1961, and covered rolling stock accommodation at Stewarts Lane was extended. In addition to these and the existing suburban EMU depots at Slade Green and Gillingham, a new covered facility for electric stock was authorised at Grove Park.

A large area of land was identified for the then new depot, 250-yards north west of Grove Park station, which hitherto had been used as allotment gardens. Located just beyond milepost 8½ from Charing Cross, twelve parallel-running London-facing sidings were laid, six of which were covered by a shed. This was 820-feet-long, comprised a lattice steel frame clad with asbestos, and was afforded direct connections with all four tracks of the main line and the "down" sidings of Hither Green Marshalling Yard.

The depot's third rail went "live" on 25th May 1959. The site was used for stabling and cleaning EMU (suburban and mainline) stock only; a dedicated facility for heavy maintenance was opened at Chart Leacon, a mile west of Ashford station, in addition to a light repair shop at Ramsgate. An automatic carriage washer was installed 175-yards north west of the depot building.

In 1991, the EMU stabling capacity around Grove Park was greatly increased. As part of the "Networker" programme, which sought to introduce new passenger rolling stock for South Eastern Division suburban lines, the "down" side of Hither Green Marshalling Yard was remodelled. This involved replacing a series of redundant freight sidings with electrified berthing loops. Eight "loop" sidings were laid, capable of accommodating twelve-vehicle EMU formations; to the east of these, five new freight loops were provided, and both sets of lines were illuminated by floodlights mounted on seven gantries. The automatic carriage washing apparatus was moved 720-yards in the London direction at this time. Additionally, on the ''up'' side, all freight sidings of Hither Green Marshalling Yard, including the continental freight depot, were abolished: the northern portion of the site was given over to residential development, whilst the southern part became host to a further eight London-facing electrified berthing sidings. Finally, ten years later, the dreary asbestos cladding of the 1959 shed was replaced by corrugated metal.

Track plan of Grove Park Depot as of 1970. Click the above for a larger version. © David Glasspool 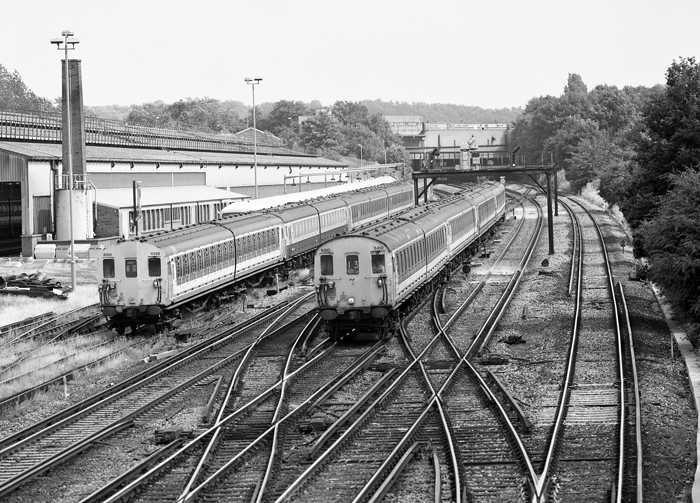 BR-designed 2 EPB No. 6410 is seen leading another three units of the same class on an Orpington to Cannon Street service. On the left can be seen a line of 2 EPB units stabled at the depot, that on the end being Bulleid-designed No. 6326. This unit has window bars, which suggests it was once deployed on the North London Line. Just behind can just be seen the roof of a then brand new Class 465 "Networker" four-car unit. © David Glasspool Collection 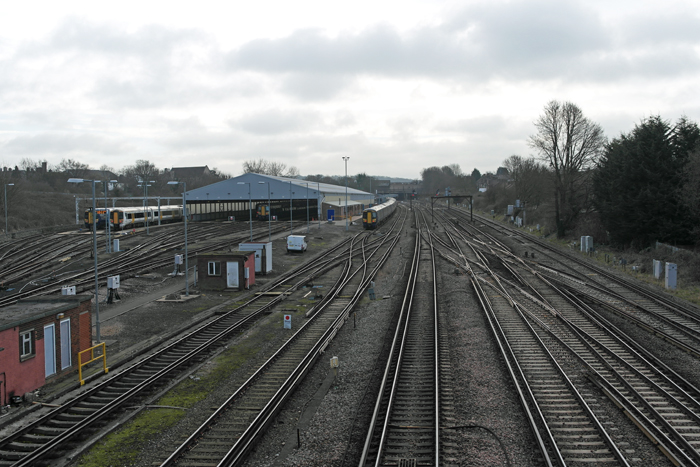 The four-track "Tonbridge Cut-Off" main line is on the right of this Orpington-bound view. The double-slip has been a feature of the depot since the earliest days. The automatic carriage washing apparatus was formerly positioned just out of view, to the bottom left, but was moved 720-yards towards London on the commissioning of the additional berthing sidings on the site of Hither Green Marshalling Yard. © David Glasspool 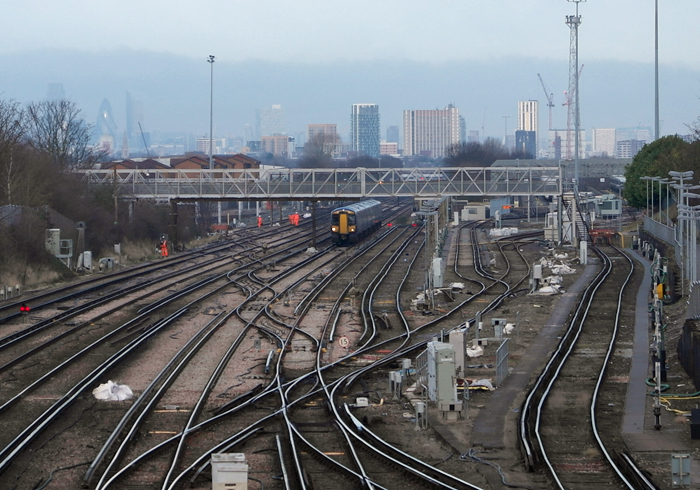 Looking towards Hither Green, a southbound Class 375 is seen stuck at signals - a broken down train at Orpington was causing severe delays. The entrance to the freight sidings is marked by the second track from the right, which lacks a conductor rail. © David Glasspool 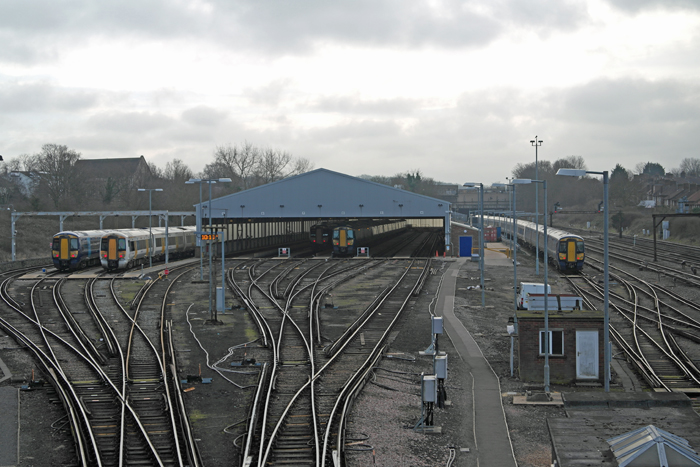 All main line stock on this day. The tracks covered by the shed are numbered 4 to 9 from right to left. This is in spite of the fact that siding No. 3 has long since disappeared. © David Glasspool