This was once the epitome of a rural Kentish branch line which, in its later years, relied more on seasonal hop pickers’ specials than normal passenger traffic. The South Eastern Railway commenced through running between London and Dover on 7th February 1844. The company reached Hastings via Ashford in 1851, this route opening to passenger traffic on 13th February of that year. A more direct line to Hastings, from Tonbridge via Tunbridge Wells, came into use for scheduled traffic on 1st February 1852. Thus, thereafter existed a large area within the middle of the aforementioned series of lines which lacked any form of railway, primarily because the region comprised under populated areas yielding little in the form of potential traffic. The same could be said north of the SER’s trunk route, where an obvious gap existed within the borders made by the Medway Valley Line in the west, and the Ashford to Margate line (via Canterbury and Ramsgate) in the east. The northern territories were, however, fast being honed in on by the ‘’East Kent Railway’’, which started running between Chatham and Faversham on 25th January 1858. Renamed the ‘’London, Chatham & Dover Railway’’ on 1st August 1859, this company reached Canterbury on 9th July 1860, London on 3rd December, and Dover on 22nd July 1861. A satellite of the LC&DR, the ‘’Sevenoaks Company’’, completed a line between Swanley and Sevenoaks (Bat & Ball) on 2nd June 1862. The concern renamed itself the ‘’Sevenoaks Maidstone & Tunbridge Railway’’ in the same year, promoting a line cutting through the middle of the hitherto untouched northern district sandwiched in-between SER and LC&DR trunk lines. The SER reacted by proposing a similar cross-country route to safeguard the territories south of its main line. Thus, on 23rd June 1864, the company received Royal Assent for lines to Cranbrook, Hythe, and Sandgate.

The scheme was quickly overtaken by the ‘’Weald of Kent Railway’’, authorised on 25th July 1864 to make a continuous line to the Kent Coast. The proposed line was to leave the SER trunk route at Paddock Wood, passing by Goudhurst, Cranbrook, Tenterden, and Bislington (2⅓-miles east of Ham Street). It would eventually come to terminate in the parish of Cheriton, nearby a sluice house of the Royal Military Canal. The line’s continuous length was 40-miles 65½-chains, and a timeframe of six years was given for completion. The Weald of Kent Railway Company was authorised to raise £600,000 in share capital (£44,373,569 at 2008 prices), in addition to a further £200,000 in the form of loans (£14,791,190 at 2008 prices). The following connections with existing lines were authorised:

Two years later, the Weald of Kent scheme was dropped, not because of the SER’s lack of finance, but rather the difficulties encountered by the rival LC&DR. A financial crash of 1866 saw the LC&DR’s main building contractor, Messrs Peto & Betts, go bust, and as a result, the former became impoverished for the rest of its existence. The SER’s impetus to protect its southern territories disappeared.

A second attempt to serve the forgotten triangle, within the confines of the circuit of lines between Tonbridge, Ashford, and Hastings, emerged in the following decade. This transpired to be nowhere near as grand as the earlier WOKR, and was a railway promoted by local landowners, rather than the SER. The ‘’Cranbrook & Paddock Wood Railway’’ received Royal Assent on 2nd August 1877, for a single-track line between its namesakes. Raising the necessary capital for the line was painfully slow, during which an extension of the branch to Hawkhurst was authorised, on 12th July 1882. Construction of the branch did not commence until 1891, by which time 22-year-old Holman Stephens had been appointed as Assistant Engineer. In the previous year, the construction timeframe for the branch had been renewed, and completion was required within six years. Mr Joseph F. Firbank was appointed as the building contractor. The Hawkhurst branch, 11½-miles long, became a typical Stephens line, characterised by steep gradients and stations isolated from the villages they purported to serve. Formal opening of the line to regular traffic was made in two stages:

The ultimate aim was to make the branch a through route, providing a connection with the Ashford to Hastings line at Rye. In fact, the branch was never taken past Hawkhurst, and it became a dead-end appendix of the SER’s trunk line. The independent Cranbrook & Paddock Wood Company was swallowed up into the SE&CR on 29th January 1900 – the SER had worked the branch from the outset.

Stations commissioned on the route – Horsmonden, Hope Mill, Cranbrook, and Hawkhurst – were built cheaply, and in what became a Stephens’ trademark, corrugated iron was used throughout in construction. At Hawkhurst, the budgetary theme also went to the extent of facing the platform edge with timber. Upon the latter was the main building, naturally a single-storey affair of 65-foot length, fabricated from the aforementioned corrugated iron and sporting an integrated canopy supported by five stanchions. The platform was lined at its rear with timber fencing and was host to barley-twist lampposts. There were in fact two platform faces, the second of which was a bay terminating before the station building – this can clearly be seen on the below track plan.

The fact that a proposed extension of the line never took place saw that Hawkhurst developed an interesting and somewhat extensive layout, despite its location at the end of a rural branch. Both locomotive and freight facilities were adequately catered for. Alongside the platform was provided a run-a-round loop formation, but so short was the headshunt that only a small tank engine was able to fit in-between the points and buffer stops. Indeed, when ‘’main line’’ engines did work down the branch, particularly during the hop-picking season, a second engine was required to remove the carriages from the platform line, in order to ‘’release’’ the train engine. A spacious brick-built engine shed, 60-feet-long by 30-feet wide, could be found north west of the station. This was single-ended, accommodated two southward-facing tracks, and sported a gabled pitched roof and two sets of double wooden doors. A huge water tower, at least three-storeys-high with a red brick base, stood south east of the shed, and this was accompanied by a coal stage used by crews to re-fill the bunkers/tenders of their engines. No turntable was ever in evidence here, and even the run-a-round loop was not required on those occasions when the branch line was operated by push-pull trains.

Behind the platform could be found another shed, that of the goods yard. Also brick-built with a pitched roof, this measured 50-feet in length by 25-feet in width, and was a through affair, accommodating a single track. The goods yard, all of which was located behind the platform, comprised five sidings (including the goods shed road) and was host to a four-ton crane. At its southern extremity, the yard served a series of coal pens; indeed, coal was the main freight handled by the branch, except for the seasonal hops traffic. The layout was controlled from an attractive all-timber fourteen-lever signal box, positioned just south of the water tower. Whilst the line appears to have been cheaply built, no expense seems to have been spared in provision of accommodation for the Station Master. Spacious two-storey-high red-brick houses were brought into use at all intermediate sites. At Hope Mill (Goudhurst) and Cranbrook, these were built upon the platforms, alongside the station buildings, but those at Horsmonden and Hawkhurst were isolated from the railway.

The advent of the Great War brought both temporary and permanent closures of stations and routes as a matter of economy. Hawkhurst and Westerham branches closed to passenger traffic on 1st January 1917; that to Gravesend West had earlier ceased to be part of the timetable on 1st December 1915. The Hawkhurst closure had been preceded by the abolition of the Sunday service and a significant reduction in weekday trains. The line subsequently re-opened to traffic on 1st March 1919. This was a branch that changed little during its existence, but detail alterations did indeed occur at the terminus. Circa 1930, under Southern Railway auspices, the engine shed lost one of its two roads, and the coal stage and adjacent siding were also removed. These changes would appear to signal that the building ceased to be used for locomotive storage thereafter. As mentioned earlier, the Paddock Wood to Hawkhurst service was more often than not formed of a Maunsell push-pull set, powered by an ex-SE&CR ‘’H’’ Class 0-4-4 engine. On those occasions when the stock comprised three-vehicle SE&CR ‘’Birdcage’’ sets, once common on the Tonbridge to Reading service, the locomotive had to run round at Hawkhurst.

The nature of traffic along the Hawkhurst branch, particularly in later years, was akin to that of a holiday line – it was seasonal. Traffic for Benenden School had once been an important source of revenue; pupils used the station at Cranbrook, but their luggage was handled at Hawkhurst. By the late 1950s, however, this had mostly disappeared onto buses. A hive of activity came with the hop-picking trains in September, and carriage stock for these ‘’main line’’ workings was often stabled in the goods yard. Indeed, passenger traffic was particularly light in later years, and the branch had for long suffered as a result of its stations being some distance from their intended population centres. The village of Hawkhurst was a mile south of the station; not the worst offender, however, for the station at Cranbrook was two miles distant from the village. Indeed, the branch line became a pre-Beeching closure, its demise accelerated by the Kent Coast Electrification Scheme. The final scheduled services ran on 11th June 1961; on the following day, regular electric services commenced on the ex-SER main line to Dover, via Tonbridge and Ashford. Readers will be pleased to know that since closure, much of the Hawkhurst station site remains intact. The station building, platform, and water tower were early casualties, but the goods shed and signal box remained long after, being demolished in 2007 and 2012 respectively to make way for industrial development. The engine shed and Station Master's house remain standing, the latter being in an isolated spot, south of the site. 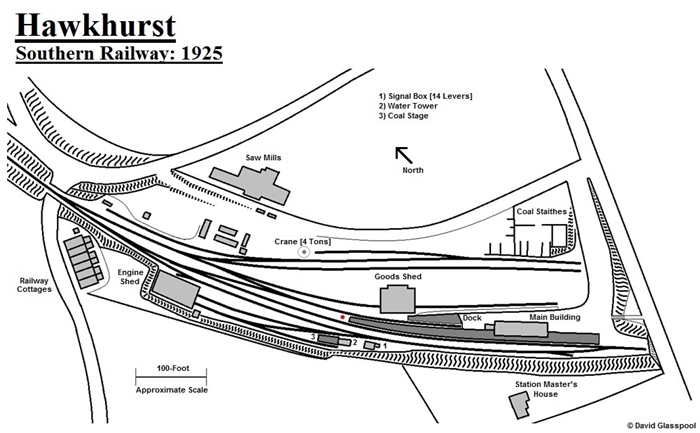 Hawkhurst track layout prior to closure of engine shed. Click above for a larger version. © David Glasspool 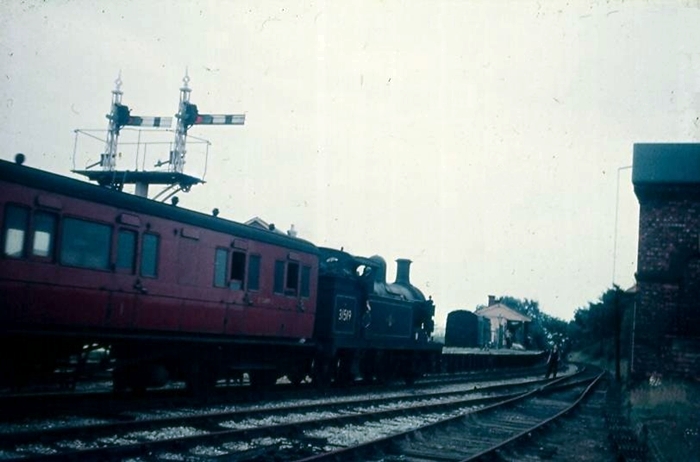 The token for the single line is about to be exchanged between driver and signalman as 0-4-4 ''H'' Class No. 31519 trundles into Hawkhurst with auto-set No. 656. In the background can clearly be seen the corrugated iron station building and timber-faced platform, the former of which is partly obscured by a van in the bay line. Just visible above the carriage is the goods shed's roof. On the right is the huge water tower, behind of which is the signal box. The rusty track in the foreground leads to the engine shed. © David Glasspool Collection 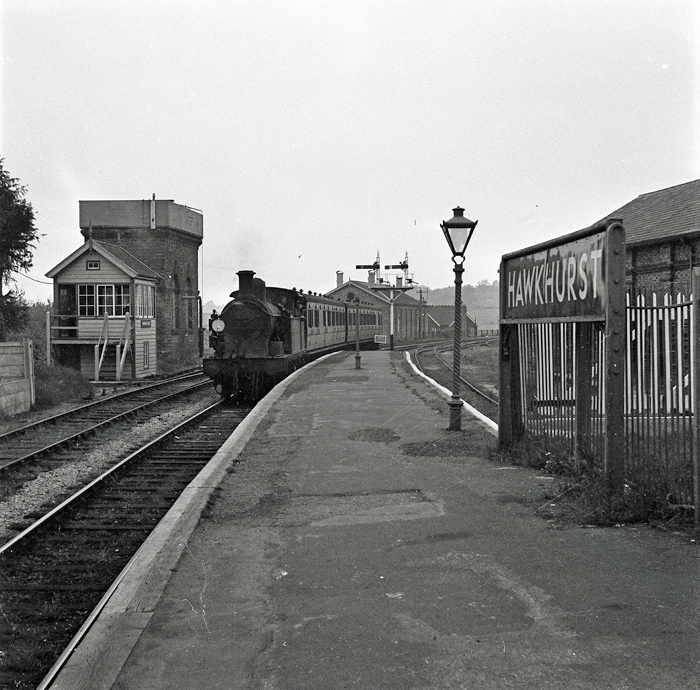 Just over a month left until closure, "H" Class No. 31551 arrives at the end of the line from Paddock Wood. The substantial water tower was demolished shortly after closure, but the signal box survived right up until 2012, after which it was flattened to make way for a large industrial building. Behind the last coach of the train can be seen the engine shed, which remains to this day, whilst emerging to the right of this are railway cottages. Behind the platform name board on the right is the goods shed, which remained standing until 2007. © David Glasspool Collection