Over time, this station has developed into a modern, spacious, and well laid-out arrangement, tailor-made to the need for non-stop services to overtake slow trains. Headcorn came into use on 31st August 1842, when passenger services were extended eastwards from Tonbridge. Previously, through running between London Bridge and Tonbridge, via Reigate Junction (Redhill), had commenced on 26th May 1842. Headcorn temporarily served as the eastern terminus of the SER’s fledgling main line to the Kent Coast, until further piecemeal openings of the route saw passenger trains reach Ashford on 1st December 1842, and Folkestone (albeit a temporary station initially) on 28th June of the following year. Through running to Dover finally commenced on 7th February 1844.

Eventually, the station became a typical SER countryside affair, fitting for rural Kent, despite residing on a main line. The company’s trademark staggered platform arrangement came into use here, around a double-track, and both surfaces were linked by a track foot crossing. The platforms were organised in a fashion which ensured that passengers crossing the track always passed behind a train stabled in either platform. The ‘’down’’ side was host to the main building: this was a single-storey affair, fabricated from tongue-and-groove timber, and featured a slated pitched-roof and three brick-built chimneystacks. Virtually identical structures also came into use at Marden, Staplehurst, and Pluckley, and reflected the SER’s ‘’economical’’ approach to station construction. None of these buildings were graced with canopies, and their platform-facing façades featured a trio of double-door sets and an equal number of casement window frames. Headcorn’s ‘’up’’ platform was host to a rather frugal wooden waiting shelter, which featured a backward-sloping roof – this, too, was devoid of a canopy. Both platforms were backed at their rears by wooden fences, these of which still remain a feature of nearby Pluckley today.

Headcorn incorporated similarly interesting goods facilities as those which were in evidence down the line at Staplehurst. Sandwiched in-between the staggered platforms, accompanying the foot crossing, was a single-track intercepting both running lines at right angles. At either end, this track fed small wagon turntables, the latter of which were common features of Victorian goods yards. Four sidings and a single dock line were in evidence on the ‘’down’’ side, to the west of the platform. One siding fed straight off the wagon turntable here; the dock line was similarly accessed via the turntable. Of the three remaining westward-facing sidings, two were lengthy affairs running alongside the ‘’down’’ running line, and early maps suggest that one of these terminated within a goods shed. Before reaching the goods shed (this of which was brick-built, single-storey, and featured a slated pitched-roof), the sidings served a trio of coal stacks and sprouted a fourth siding. Conversely, the ‘’up’’ side was host to a single siding, positioned to the east of the platform: this had a trailing connection with the adjacent running line and was also linked to the nearby wagon turntable. Some change appears to have occurred during the 1880: this included the conversion of the goods shed to a through affair, to allow a direct connection with the behind wagon turntable. A two-storey-high clapboard signal box, of SER design with sash-style windows, also emerged at the eastern end of the ‘’up’’ platform.

Of importance in this station’s history is the coming of Holman Stephens’ Kent & East Sussex Railway. The line came into use between Robertsbridge (on the Hastings route via Tunbridge Wells) and Tenterden on 26th March 1900. An eastward extension of about 1⅓-miles was later made to a more conveniently located ‘’Tenterden Town’’ station, which opened to traffic on 16th March 1903. The final piece of the jigsaw, an extension from Tenterden Town to the SE&CR main line at Headcorn, was made in 1905, passenger services commencing along this section on 15th May of that year. At Headcorn, the K&ESR was provided with a dedicated platform face, which ran parallel with the rear of the SE&CR station’s ‘’up’’ side. Waiting accommodation existed in the form of a corrugated iron shelter, which had been brought to the site from Tenterden Town. At the latter, a more permanent brick-built affair was erected, and this remains in existence today. A physical link between K&ESR and SE&CR metals was made at Headcorn by means of a single track which spurred off the existing ‘’up’’ siding, to the east of the platform.

The SER had shown foresight at Tonbridge, Paddock Wood, and Ashford, by providing four tracks, allowing non-stop expresses to overtake slow services. Similar provision had not been made at Headcorn, presumably because under SER tenure, the station did not posses the junction status which the aforementioned trio of sites did. This later became problematic and consequently, the Southern Railway published expansion plans in 1926. These included the total abolition of the existing ‘’up’’ side infrastructure: the SR and K&ESR platforms were swept away, and the SER signal box was demolished. The existing running lines were slewed just south of their original positions, and a pair of loops were inserted to serve the platforms. The then new ‘’up’’ platform was built directly opposite its ‘’down’’ side counterpart, and the latter itself was lengthened and rebuilt in concrete, to match the former. Both surfaces were linked by a 70-foot-long footbridge, and a new curved K&ESR platform came into use behind the ‘’up’’ surface. An indirect single-track connection between K&ESR and SR metals was made to the west of the ‘’up’’ platform: trains would be required to perform a headshunt manoeuvre, which subsequently gave access to the ‘’up’’ platform loop. The revised track layout, completed in 1930, was controlled by a new signal box, positioned immediately west of the ‘’up’’ platform: it was two-storeys high, mostly of brick composition, but featured timber roof gables at either end.

Track Plan of the wholly rebuilt Headcorn station, including Channel Tunnel loop and twin-span footbridge. Please note that this is a large drawing of considerable width. Drawn by David Glasspool 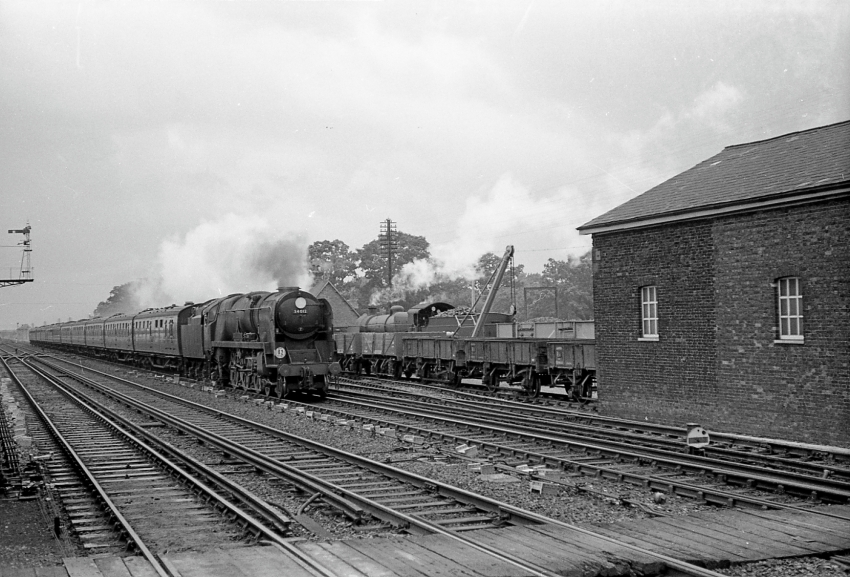 Approaching Headcorn from the west with a non-stop Dover express is Rebuilt West Country Class No. 34012 "Launceston". Behind can be seen what appears to be a Maunsell "N" Class shunting in the goods yard. The yard's crane, good shed, and shunt signal are all in view. Inevitably, this site became the station car park after withdrawal of goods traffic. Conductor rails are already in place for electrification and the evident semaphore signal was soon to go. © David Glasspool Collection 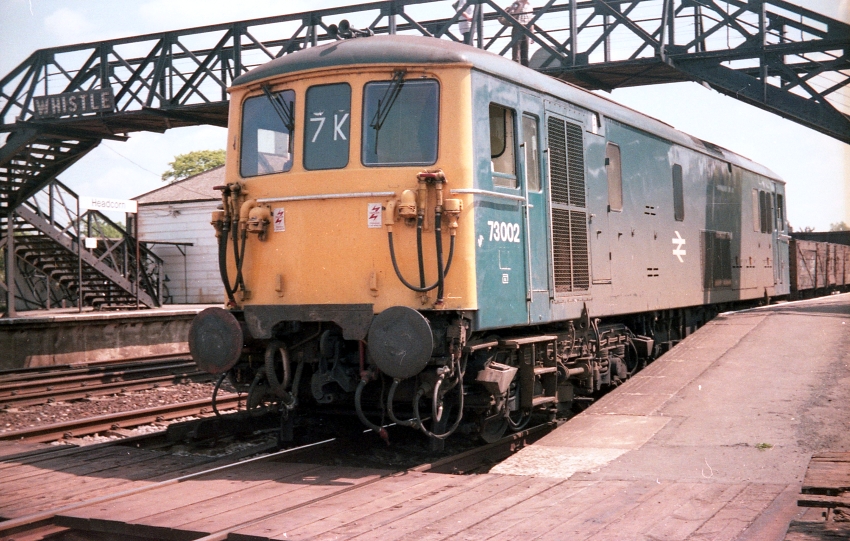 The Southern Railway's footbridge of 1930 is evident in this view, which depicts Electro-Diesel No. 73002 in the "up" platform loop. The headcode corresponds to a movement between Margate and Ashford via Canterbury West, but obviously Headcorn is outside the scope of that definition. The train could either have been waiting for a non-stop passenger service to overtake, or perhaps the locomotive was preapring to change ends? Trailing crossovers existed between the main running lines at both ends of the station. Note the barrow crossing in the foreground and, just emerging behind No. 73002, the SER's timber station building. The "whistle" board was for a footpath located 250-yards to the east. © David Glasspool Collection 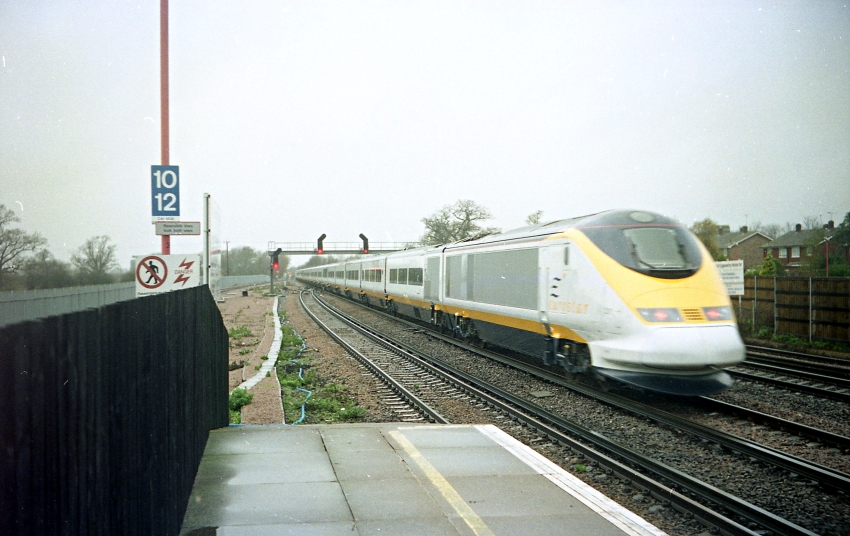 A Class 373 formation is seen heading London-bound in late 1994, at the western end of the station. On the left is the then recently-completed "up" Chunnel freight loop; the timber fence on the far right separated the railway from the station's car park. © David Glasspool Collection 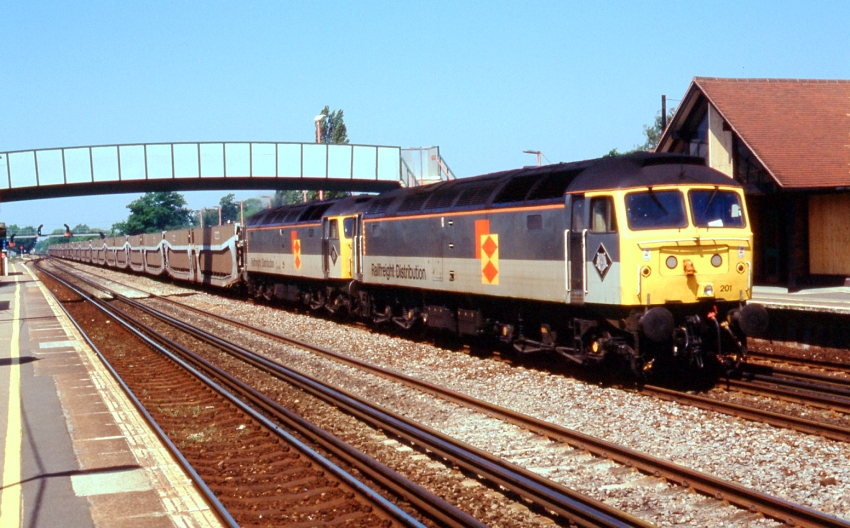 Class 47 Nos. 47201 and 47287, wearing the attractive two-tone grey "Railfreight Distribution" livery, are seen passing non-stop on the "down" through line, Dollands Moor-bound, fronting a rake of protected car-carrying wagons. It is evident that the station building was receiving remedial works at this time. © David Glasspool Collection